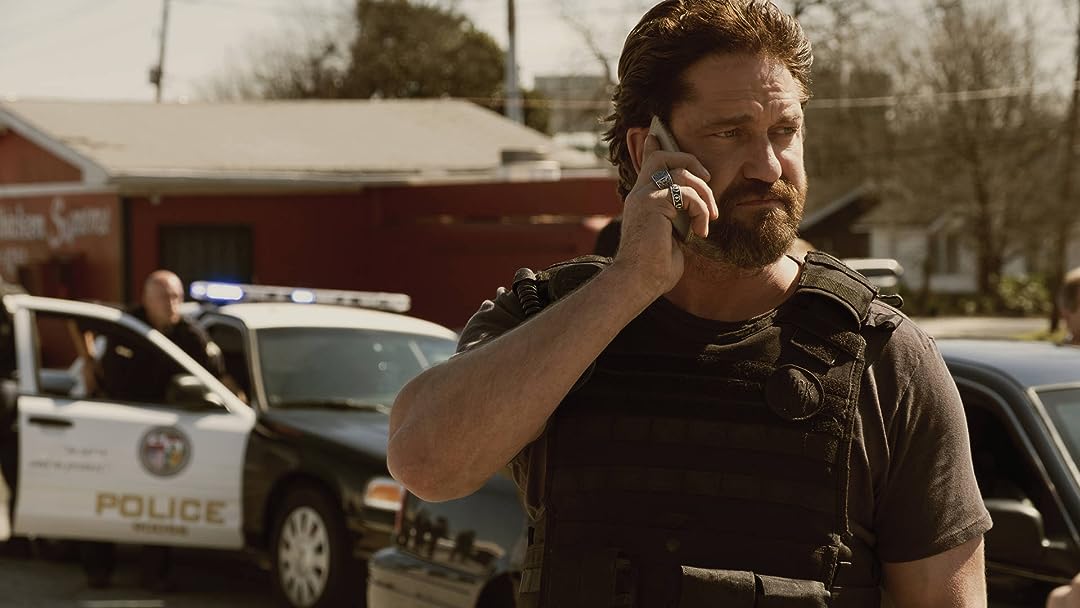 (10,357)7.02 h 20 min2018X-RayR
A gritty Los Angeles crime saga which follows the intersecting and often personally connected lives of an elite unit of the LA County Sheriff's Dept. and the state's most successful bank robbery crew as the outlaws plan a seemingly impossible heist on the Federal Reserve Bank of downtown Los Angeles.

MovieLoverReviewed in the United States on April 29, 2018
5.0 out of 5 stars
This Ain't Heat (spoiler alert)
Verified purchase
Ok, so this started out to feel like a total ripoff of Heat with the armored car hit in the opening scene. BUT, then Gerard Butler put on his serious bada$$ cop hat.

A good cops and robbers heist film because we don't see the end coming until it's right in front of our faces. And, all the bad guys don't get to die in this one. Props to 50, Pablo, and O'Shea -- your Pops raised you right Son. Fine work.

Not quite sure how Gudegast will do a follow-up, but he clearly left room. Excellent screenplay. Just can't see them topping the unbelievable complexity of such a heist. Something only trained personnel could ever even imagine ... much less ever pull off. haha

JimboReviewed in the United States on May 24, 2018
5.0 out of 5 stars
Great Action Film
Verified purchase
Great Action Movie as all the stars shine. Lots of Action and violence. I thought Gerald Butler was superb as a Policeman who tries to stop a Federal Reserve Robbery I said before the action scenes are great and a little humor even thrown in.
28 people found this helpful

As Butler points out..... we're the police.....we can do anything we want.....and we're quite willing to kill anyone who disagrees. Or words to that effect.

Most folks don't realize that criminals have families and culture. This movie delves into that. Another thing is this.....our Government trains troops to destabilize foreign countries, right? Ya'll know that cuts both ways, right?
14 people found this helpful

Avid ReaderReviewed in the United States on March 3, 2019
2.0 out of 5 stars
utterly convoluted, silly
Verified purchase
OK, so you're going to hit the Fed to steal the currency that's been listed as destroyed, before it's destroyed. Well, the Fed destroys it, then lists it as destroyed. Why would they destroy records of it being destroyed after collecting that data? Why wouldn't they simply 'erase' that information AFTER the money was destroyed? Oh, and the guys who daily shred money don't know the difference in weight and appearance between a full container and one less than half full? Yes, they weigh those money trolleys.

One has to be pretty dim to accept that, but before we get there...
-
They want an armored truck to slip in to the Fed unnoticed. So rather than simply go to Boise Idaho or Kalamazoo Michigan and buy a surplus armor car for twelve thousand bucks and repaint it, as they're going to do so anyway, they commit four homicides, within a short distance of the Fed, so the local cops are aware there's a missing armored car!
-
One could go on and on and on. Staging a bank robbery as a distraction, but actually being at the bank! Yep, on and on.
7 people found this helpful

Michael M.Reviewed in the United States on June 28, 2018
5.0 out of 5 stars
Terrific Entertainment
Verified purchase
This one never lets up. Professional bank robbers against a grizzled dedicated cop. Near non stop action, beautifully filmed with a vibrant sound track to match makes it150m of pure entertainment.
14 people found this helpful

Snowboarder Bo SnoarderReviewed in the United States on July 21, 2018
4.0 out of 5 stars
Movie of thieves (and bad cops)
Verified purchase
Better than I expected. Gerard Butler's character was a jerk; I kept hoping he'd die so everyone else could live a happy life without him. Acting was very good throughout. Dialogue was good. Direction was good. Music was fantastic (Cliff Martinez totally @#%&ing rocks). Ending was better than I thought it might be, I'll give it that. 4/5 and I plan on watching again even tho it's only been 30 minutes since I finished my 1st viewing.
12 people found this helpful

ShadowfaxReviewed in the United States on June 24, 2018
3.0 out of 5 stars
One Time Viewing was Enough
Verified purchase
Thin plot & minimal story. I suppose I rented this movie solely because Gerard Butler was in it & wanted to see an "action" film. Yes, there was a plot twist, but it just seemed tagged on & not enough clues or story ingenuity to make the surprise believable.
13 people found this helpful

Amazon CustomerReviewed in the United States on February 1, 2020
5.0 out of 5 stars
MENTALLY SLAPPED
Verified purchase
I hated this movie. I skipped ahead many times. i couldn't tolerate Gerard Butler's character. Who was a bully, corrupt lieutenant in the LAPD or the LASD (Sheriff) department. I didn't care to find out. His character reminds me of how this attitude is what many cops have. Since the corrupt system protects them, they aren't concerned. His character is so disgusting that his wife divorced him. And, as usual, this fool tries to intimidate his wife's boyfriend using his badge. Acts tough, but weeps like a little baby when he realizes he lost his family. Fools like this cop have a public perception that they are the type that make good law enforcers, but they don't. They are just a threat to everyone. But the Powers That Be like them. Arrogant sheriff's department agents are smarter than the FBI? I doubt that. I don't like these type of law enforcers. I get exposed to their attitude too often at the gym.

A savings and loan is robbed. The sheriff department watches them. They already knew about a sewer used for a bank robbery, but comes as a last minute realization that it is the bank robbers escape route from this smoke screen bank robbery. The real heist is the federal reserve. The LASD were talking about it in a meeting.

The federal reserve would have immediately known about Pico Rivera Savings and Loan robbery. But, they let an Armored Truck for a Pico Rivera transport into their facility.

The characters do portray the policemen very well. Even the arm flung outwards and bow-legged walk was copied accurately.

The final shootout amongst all the backed-up cars is silly. They show themselves as marksmen in the shooting range, but waste several hundred bullets and only two get shot. And, like in every movie, they are appendage wounds, "yawn". Then a miracle occurs: they become expert marksmen again. Well, sort of, they only inflict appendage wounds again, except for one. It seems as the black cop got a life threatening wound.

And then, the miracle stops when he really needs it. He is back to an unskilled shooter. And as a skilled military trained individual, yes, he still stands straight up after jumping an aluminum fence. That is where he gets shot when the corrupt cop shoots through the fence and hits him. But, I wonder how the bullet penetrated the armored vest.

And yes, because of the attitude of the corrupt lieutenant, I was cheering for the bank robbers.

However, the ending I did like. Its a movie ending that's good. The way it should be more often. I still gave it one star for exposing me to the cop attitude. But, its surprise end where a mental slap is given to the corrupt cop who thought he out-witted the bank robbers that sort of made up for having me tolerate the cop attitude.
2 people found this helpful
See all reviews
Back to top
Get to Know Us
Make Money with Us
Amazon Payment Products
Let Us Help You
EnglishChoose a language for shopping. United StatesChoose a country/region for shopping.
© 1996-2021, Amazon.com, Inc. or its affiliates