Design Patterns for High-Quality Automated Tests and millions of other books are available for Amazon Kindle. Learn more 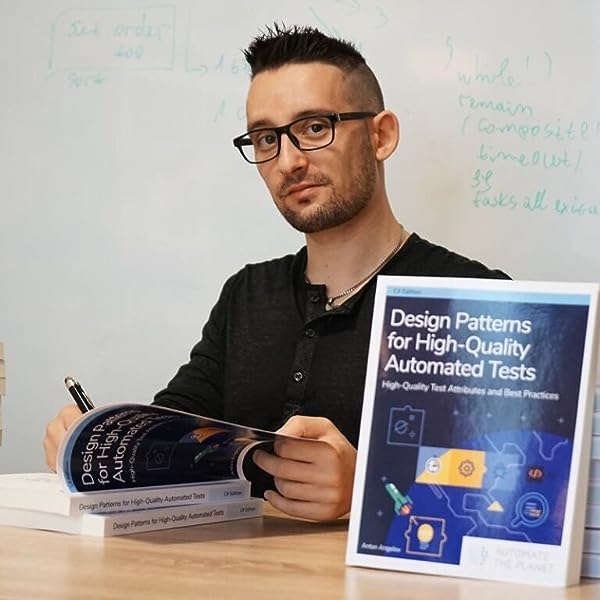 Start reading Design Patterns for High-Quality Automated Tests on your Kindle in under a minute.

4.5 out of 5 stars
4.5 out of 5
33 global ratings
How are ratings calculated?
To calculate the overall star rating and percentage breakdown by star, we don’t use a simple average. Instead, our system considers things like how recent a review is and if the reviewer bought the item on Amazon. It also analyzes reviews to verify trustworthiness.
Top reviews

Dave
4.0 out of 5 stars Great development book
Reviewed in the United States on March 3, 2021
Verified Purchase
This book isn't just great on the topic of developing robust test automation, it's an excellent book on the topic of design patterns, using the development of a test automation framework as an example. There are some minor grammatical errors in the book, but that's entirely acceptable as the author is a not a native English speaker, and the technical content is flawless. This is intermediate-level; there's a basic assumption that the reader understands the fundamentals of OO programming and without that familiarity the reader may get lost. Familiarity with Selenium Webdriver is also assumed, but the author begins his example from a base level, and referencing back to the Webdriver documentation will fill in the gaps for anyone who hasn't worked with it before. Highly recommended.
Read more
3 people found this helpful
Helpful
Report abuse

Y.Ch.
5.0 out of 5 stars Most practice-oriented book related to QA Automation
Reviewed in the United States on March 11, 2020
Verified Purchase
I have been following the work of this book's author for 2 years and can say with no doubts that he is one of the most skilled guys related to QA Automation in terms of how to design properly an automation framework with tests and write clean and effective code.
The book is oriented to people who want to go deeper into automation testing and start thinking and acting more as a Software Engineer in Testing, but not as a regular tester who is just producing big amounts of tests via code duplication and without any optimisation.
Prior knowledge in OOP using C# or Java is required for the examples shown.

Pablo
5.0 out of 5 stars Read this book if you want to make your test bullet proof.
Reviewed in the United States on April 3, 2021
I’m coming from a JavaScript background and after researching for a book I found this one. And as Anton mentions, you can use it and apply concepts to any language. I’m amazed how you approach concepts and examples, really easy to follow. I have learned a lot so far. Thanks for putting this together and I’m already using it to make my tests bullet proof. Loved the solid examples.
Read more
One person found this helpful
Helpful
Report abuse

Alex Z
5.0 out of 5 stars Great book for test automation specialists
Reviewed in the United States on January 26, 2021
Verified Purchase
Very nice description of design patterns based on OOP, SOLID, Page Objects etc for GUI and API test automation. A lot of good practices and applicable advices. Must have especially for C# test and check automation specialists
Read more
One person found this helpful
Helpful
Report abuse
See all reviews

J. S. Hardman
4.0 out of 5 stars Useful content, but in need of proof-reading
Reviewed in the United Kingdom on April 24, 2021
Verified Purchase
First things first – the title “Design Patterns for High-Quality Automated Tests”. It’s a generic title, rather than mentioning any specific technologies. In practice, the code in this book relates to (Selenium) WebDriver, although the patterns used are appropriate for use with other technologies too. I’ve built test systems for WebDriver and other technologies (recent examples being Ranorex and Xamarin UITest), and went through the same sort of decision-making processes as described in this book for each technology.

The English used in this book is variable – it would have been worthwhile having a native English speaker, who is also an experienced Software Engineer in Test (SET) (a.k.a. Software Development Engineer in Test (SDET)), proof-read the text before publication. The problematic English is worse near the start of the book, and lessens the further you get into the book. There are also some errors in text and code, that a proof-reader should have spotted.

The content of the book is pretty good, certainly more interesting than most WebDriver texts that I have read. It’s clearly the work of somebody far more experienced than the majority of SETs/SDETs. That being said, some key explanations are missing, the final design/code could have been finessed some more (including having a Fluent API with a Test Design Index of 5), and some extra content could have been included that expanded on Chapter 10 and Appendix 1 (it feels like these sections were cut short, rather than being finished to their full potential). Whilst not aimed at the same market, I would suggest reading this book in conjunction with “The Art of Unit Testing” by Roy Osherove, as that may make the reader consider questions not covered in this book.

Whilst I think the book could have been better (and it’s missing an index, which is frustrating), it’s still better than other texts I have read about using WebDriver. When I used to recruit SETs/SDETs for QA teams that I led, if an interviewee were experienced to the level of this book, the candidate would have stood out from the crowd.

Teofil Popov
5.0 out of 5 stars Use the Book with the Code Examples from GitHub to gain the best Experience
Reviewed in Germany on March 15, 2021
Verified Purchase
I am very angry that I read the book late and I lose a lot of time in other books without examples and online trainings in udemy, pluralsight, youtube to find the best approach how to write webautomation Tests with selenium.
The book describes with very good examples how to code tests with selenium and why we should use the best practices and design patterns. I advise you to download the examples from GitHub and l do/rewrite the examples in parallel as you read the book, if you don’t have professional experience. Because a low level programming experience is recommended/needed. But also for beginners like me, who switch from manual Testers to automation QA engineer were the examples und the explanations fully understandable (if you don’t have to write any code, but wish to know some best practices).
I believe also that every QA engineer no matter the experience level will find something useful for his/her/its job and will learn from the book. If not, assert that “the feeling that you doing things right” is true:)
Read more
Report abuse

Rudolf Grötz
5.0 out of 5 stars Great content
Reviewed in Germany on October 14, 2020
Verified Purchase
Preparing a workshop for test automation design patterns and found this awesome book from Anton Angelov
Calculating the #TDI for my helloGoogleWorld workshop example without pageObject is an eyeOpener. Guess I found the perfect xmas-present for the Raiffeisen Bank International AG testing guild and a giveAway for the GO-IT! Academy TestAutomation Program... Kudos to Anton!
Read more
Report abuse

Zeeshan
5.0 out of 5 stars Just started reading it and finding it as awesome as Anton blogs
Reviewed in India on March 10, 2020
Verified Purchase
Just started reading it....i am big time follower of anton blog...hoping this book helps me same way his blogs helped me in understanding implementation and importance of design patterns....
Read more
Report abuse
See all reviews