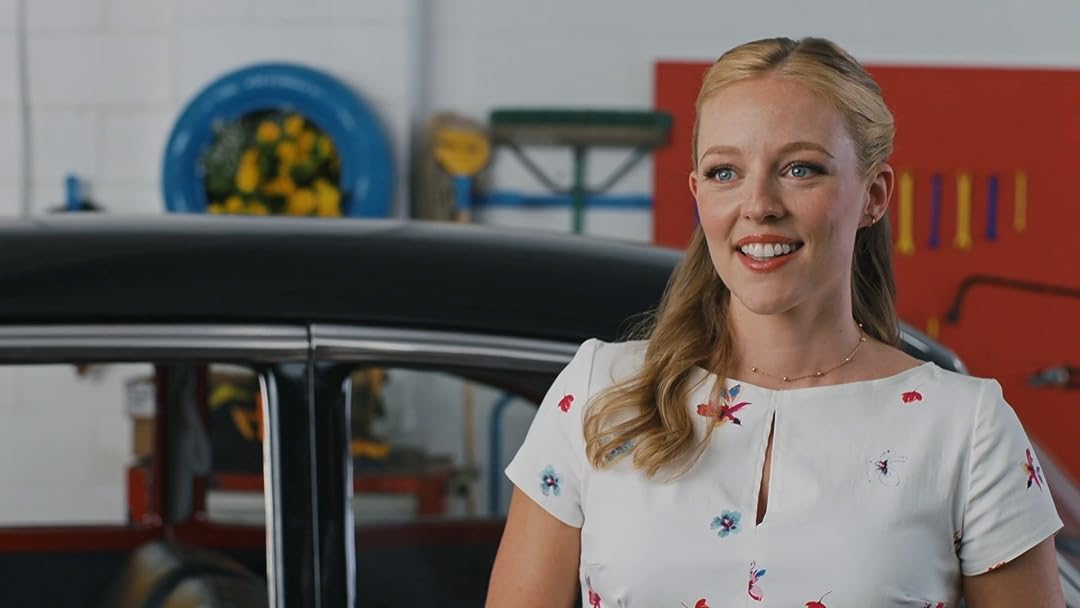 (5)
6.01 h 28 min2021G
When clothes designer Skye takes to the road with her mobile 'fashion truck', assistance arrives in the unlikely form of handsome entrepreneur Kevin. TV-G

Watch with UP Faith & Family
Start your subscription
Add to
Watchlist
By ordering or viewing, you agree to our Terms. Sold by Amazon.com Services LLC.
Write review

RomComConnoisseurReviewed in the United States on August 11, 2021
2.0 out of 5 stars
eee-gad that was bad
Verified purchase
Trivial underdeveloped conflict. Conversations lacked depth. Acting felt like they were acting. Rolled my eyes a lot from cheese. This was worse even than my terrible rhyme in the headline.

I found it hard to be convinced by Kelly Van der Burg's performance. I found all the dialog around "fashion philosophy" tiresome and I wonder how authentic it would seem to professionals in that space.

I wont watch this again, so it cannot be 3 stars.

2 stars instead of 1 because I like the storyline that fashion should be practical. No one would accept a cell phone that burns their hand, no matter how extraordinary it is in any other way. Why are we willing to do the same thing for clothing. It is a quality FAIL when shoes are painful to wear. A great designer has mastered every aspect of the craft. They do not ignore an obvious flaw.

KristenReviewed in the United States on September 14, 2021
3.0 out of 5 stars
Cute & Family Friendly
Verified purchase
This movie was cute and family friendly. I would say it's more appropriate for a teen girl than an adult. The female lead's apartment even looks like a teen girl's room. There were a lot of plot holes, like she has all the money in the world for this business start up and she has to deal with no pesky things like permits. If you are young and less cynical or someone who doesn't dig too deep, you may enjoy this one.

Lindsay MarieReviewed in the United States on August 10, 2021
5.0 out of 5 stars
Absolutely loved it.
Verified purchase
This movie was soooo cute.

H. BalaReviewed in the United States on July 22, 2021
4.0 out of 5 stars
a thoughtful lesson or two under the cheese
I like Skye's philosophy. A New York fashion designer, she believes that the fit and feel of one's attire is just as important as how it looks on a body. Her one great mission is "to make beautiful clothes, and to help people find the ones that are perfect for them." It's why she clashes so hard with her boss who's willing to trade quality for the cheap.

The items from the fall line have arrived at Claw'd, and even Skye Gozen's work friend Amanda cautions her to shush. But if Skye had listened, there would've been no movie. Skye (Kelly Van Der Burg) gazes at the fall collection and is aghast. She's highly critical that the articles of clothing aren't stitched together, but, rather, are glued. Look, that dress is already falling apart. Her boss's retort is that applying glue instead of stitches lowers the price per item by 2%. Also, Skye's fired.

To pile on to her woes, her boyfriend of five years, Patrick (Kym Wyatt McKenzie), keeps hemming and hawing about getting engaged to her. She finally tells him they need to go on a break.

To quote the burglar's motto: "When God closes a door, somewhere he opens a window." Maybe now Skye can pursue her dream of launching her own fashion line. She's had a vision board about it since forever. She only has to keep faith with the three C's of fashion: color, connection, and confidence. She's calling her new enterprise Maybelle.

But when every store and outlet shoot her down, what's a gal to do? Re-enter Patrick, her boo on a break. See, Patrick just got promoted to Assistant Chief Merchandising Officer of all apparel at Froman's Department Store. And he's sold Skye's fashion designing talent to his boss.

Only, Skye needs to prove that there's a consumer demand for her clothing line. So, a test. She needs to sell $10,000's worth of Maybelle clothes and snag 10,000 ShareZees followers before Froman's agrees to carry a capsule collection of her work. Oh, and she only has until the end of the month to obtain the two ten thousands.

It's a lucky day that her rack of clothes bumps into Jason Ryder (Benjamin Sutherland) out in the street, knocking him down a-- over teakettle, his coffee spilled on his suit. Jason, it turns out, is an entrepreneur, or, as his sister calls him, a "serial entrepreneur."

Jason's modus operandi is to take on fledgling companies, build them up, create a consumer base, and sell them for a profit. His last company dealt with underwater drones. His one failure was his championing the Tacoburger, which is a taco in a burger.

As of this moment, Jason is seeking a new start-up venture. He and Skye get to talking, and credit where credit's due, it's Jason who hits on the mobile boutique idea. Food trucks are everywhere. Why not a fashion truck, why not Maybelle on Wheels? Even if Skye has to learn to drive stick shift.

Sure, it may be an improbable quest trying to obtain the two ten thousands by selling affordable haute couture off a repurposed food truck. Do they get it done? I won't say.

Designed With Love comes courtesy of Reel One Entertainment, a plucky Canadian production company that's got a nice track record of solid rom-coms. Designed With Love was a fun watch, but my lasting impression will probably be how very Canadian everyone was in the movie. I'd never heard so many people say "aboot" instead of "about."

It's a good cast that seem to be having a good time. The love story is old hat but made palatable by the likability of the two leads. Of course, Skye's boyfriend on a break keeps popping up. I'm glad his strategy to get back with Skye doesn't rely on his charm and physical appeal as much as on his business acumen and connections. I think he's short on charm and physical appeal. His condescending behavior firms up your inclination to root for the other guy, Señor Serial Entrepreneur.

Maybe my favorite character is Jason's sister, Maureen (but call her "Mo"). Mo (Elise Bauman) is an auto mechanic at her own establishment, Mo's Garage, which is also where Jason hangs his hat. Mo is a bit of a tomboy. Her wardrobe is atrocious, but she's crushing on the local pupusa chef. She lacks the confidence to ask him out. You know what that means. It means a makeover for Mo, courtesy of Skye. Frankly, any scene with Mo in it is delightful. I appreciate the non-fairy tale outcome of her asking out the pupusa chef.

I've been known to quibble about how, in these rom-coms, the main character is presented as this professional something or other, but then the movie fails to show them at work. I liked it that Skye is shown as being very good at her job, not just the designing bits but the bits where she talks shop with her customers and gives great customer service. The great dramatic conflict has to do with Skye's losing touch with her conviction for a minute and on the verge of selling out. Lucky that she'd left that note in that jacket.

My favorite scene? Has to be the "fashion runway" scene with the cool music playing the models on. They all looked like they were having so much fun.

Me, I'm pettier than Skye. With her work friend Amanda's having been so unsupportive, I wouldn't have given her the time of day when the mobile boutique began to take off.

Don't let the cheesiness of the movie distract you from the stuff it wants to impart. There's an argument made here for the relevance of brick and mortar stores and how being physically touching, or, in this case, trying on an item has got the online purchasing experience beat. Also, as Skye reiterates several times, what you wear should make you feel good about yourself as well as look good. So, I guess my skinny jeans are out.
See all reviews
Back to top
Get to Know Us
Make Money with Us
Amazon Payment Products
Let Us Help You
EnglishChoose a language for shopping. United StatesChoose a country/region for shopping.
© 1996-2021, Amazon.com, Inc. or its affiliates