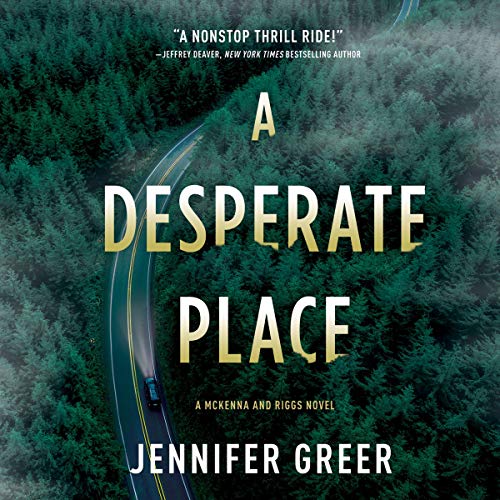 A Desperate Place: A McKenna and Riggs Novel

When the body of famous actress Niki Francis is unearthed from its shallow grave, the small town of Medford, Oregon is alarmed but not shook. After all, there should be plenty of motives and suspects - Niki had fame, wealth, looks. The kill was targeted and premeditated, and it's about her celebrity...or so they thought.

Whit McKenna is licking her wounds, working as a reporter for the local Medford rag. Fresh from a harrowing assignment for her previous post at the LA Times, which cost her her husband, Whit must pull herself together for the sake of her two daughters. The wound has hardly begun to scab when she's called to cover the murder, so she teams up with her best friend, medical-examiner Katie Riggs. Then two more victims turn up, completely disconnected from one another, and McKenna loses all hope of a breakthrough.

Rather than clarity, the possible suspects and motives become scrambled. But time is running out, and each front-page article McKenna writes brings her closer to a killer who will stop at nothing to realize a deadly vision.

4.3 out of 5 stars
4.3 out of 5
336 global ratings
How are ratings calculated?
To calculate the overall star rating and percentage breakdown by star, we don’t use a simple average. Instead, our system considers things like how recent a review is and if the reviewer bought the item on Amazon. It also analyzes reviews to verify trustworthiness.
Top reviews

Chuck Whiteley
5.0 out of 5 stars Definitely a Thrill Ride...
Reviewed in the United States on August 24, 2020
Verified Purchase
I’ve heard it said that you need to give a book 100 pages before you decide if you like it. At about page 3 I was hooked. I had a tough time putting it down. McKenna and Riggs have great chemistry. Greer does a good job of developing the characters in the novel and making you believe in both of these strong female characters. You will find yourself rooting for them. If you are looking for a page turner that will leave you waiting for the next installment this is it!
Read more
8 people found this helpful
Helpful
Report abuse

Norma Seely
5.0 out of 5 stars Killer plot line
Reviewed in the United States on September 4, 2020
Verified Purchase
Reporter McKenna and Medical Examiner Riggs are strong women dealing with tough jobs and personal issues that can sometimes overwhelm them, but that make them very easy to relate to as well as likable. I like characters I'd enjoy having coffee with. McKenna is haunted by guilt over the death of her husband in Afghanistan and Riggs by a life changing bout with cancer. This doesn't stop them from working, each in their own jobs, to stop a heinous killer dubbed Dr. Frankenstein. The developing friendship between the two women manages to navigate the conflicts of interest that can arise when they work the same case from their different professions.
The Medford, Oregon setting is a nice change of location. The author knows what she's talking about and her own journalistic background shines through in McKenna's character.
I look forward to reading more about these characters as well as learning more about them personally. I can hardly wait for Greer's next unique thriller and hope it's as look-over-your-shoulder creepy as "A Desperate Place".
Read more
5 people found this helpful
Helpful
Report abuse

Laurie Buchanan
5.0 out of 5 stars Addictive!
Reviewed in the United States on September 6, 2020
Verified Purchase
Twists and turns? Check! Characters you root for? Check. A DESPERATE PLACE by Jennifer Greer is one of those books you stay up all night telling yourself, "Just one more chapter," until you turn the last incredibly satisfying page. Yes, it's that good. More McKenna and Riggs? Yes, please. I highly recommend!
Read more
4 people found this helpful
Helpful
Report abuse

Denise A.
5.0 out of 5 stars Terrific Thriller
Reviewed in the United States on August 31, 2020
Verified Purchase
I loved the characters and the story line from start to finish. Once I started the book, I couldn't wait to get back to it. Fast paced with plenty of twists to keep you guessing. The medical component appeared well researched, thought provoking, and a bit frightening. If there was a second book with these characters, I would be reading it today!
Read more
4 people found this helpful
Helpful
Report abuse

Dianne
5.0 out of 5 stars The best author
Reviewed in the United States on March 23, 2021
Verified Purchase
This story held my interest from the minute I picked up the Kindle until now when I have finish the story. When I read a story I get so involved in it that I am actually a part of the story. I was definitely a part of the story. I hope you read this I hope you get as much out of it as I did. It was funny it was sad it was happy. The author
Read more
Helpful
Report abuse

Cathy
5.0 out of 5 stars Excellent book
Reviewed in the United States on March 16, 2021
Verified Purchase
I didn't know what to expect, but I couldn't put this book down. I chose it in the first place because
of it southern Oregon setting, but became engrossed in its plot. I never guessed the bad guy.
Read more
Helpful
Report abuse

Kindle Customer
5.0 out of 5 stars Fantastic storyline and writing
Reviewed in the United States on August 11, 2021
Verified Purchase
Just enough suspense to entertain but not keep me up at night. I fell in love with the characters and hope there is another book coming.
Read more
Helpful
Report abuse

Kindle Customer
5.0 out of 5 stars Mystery upon Mystery-?
Reviewed in the United States on March 17, 2021
Verified Purchase
The story is intrigug and informative. I loved the story and the two main characters of Whit and Riggs! Fantastic!
Read more
Helpful
Report abuse
See all reviews
Back to top
Get to Know Us
Make Money with Us
Amazon Payment Products
Let Us Help You
EnglishChoose a language for shopping. United StatesChoose a country/region for shopping.
© 1996-2022, Amazon.com, Inc. or its affiliates