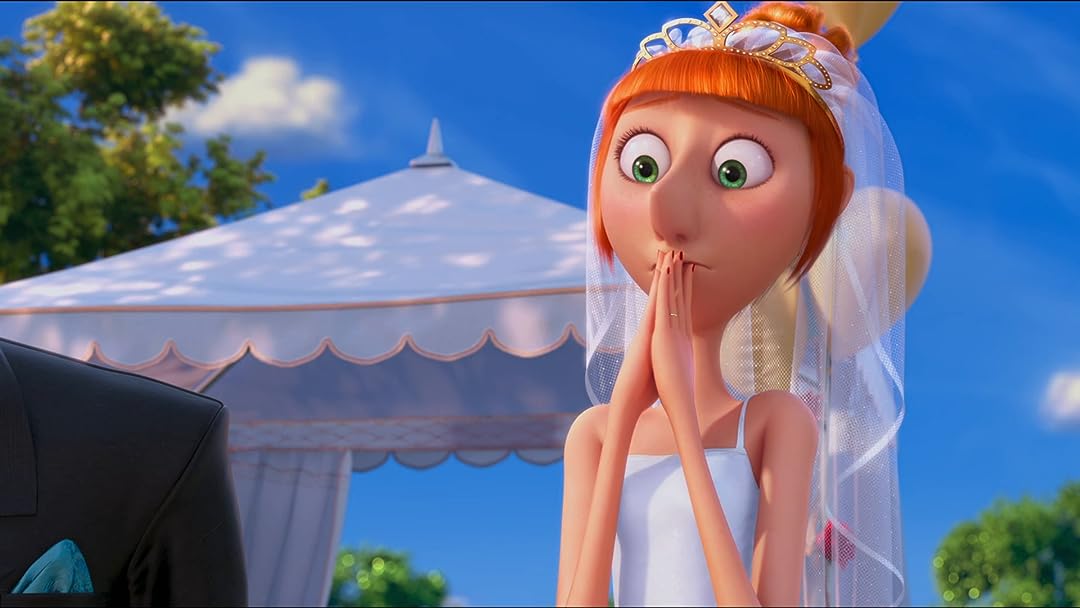 Bob N.Reviewed in the United States on May 10, 2018
3.0 out of 5 stars
GREAT movie, but Bonus Edition version doesn't work in Movies Anywhere!!!
Verified purchase
GREAT movie (probably better than the original), but the "HD Bonus Edition" version doesn't work in Movies Anywhere!!! For those that may be buying the streaming version, it will not show up in your other movie apps like Vudu, Google Play, etc via the Movies Anywhere app. Most of my Amazon streaming movies that I purchase will show up in my Movies Anywhere. The "HD Bonus Edition" of Despicable Me 2 will not, but I think the regular version of Despicable Me 2 will. Just wanted to alert folks to this issue, in case it may affect your decision to purchase.
11 people found this helpful

JeeniejolieReviewed in the United States on January 26, 2018
5.0 out of 5 stars
Kids love it
Verified purchase
My son bought this movie twice, the first time I was refunded by Amazon, the second time I felt ashamed to say,"My 1 yr. old knows my parental control password and used it to treat himself to this movie... may I please have ANOTHER refund pretty please?" Sadly that's what happened, I've caught him putting the password whenever he wants to watch a movie and I had to change it to something else (no.. my password wasn't 1111 or something like that)
Since we were stuck w. it, my kids had to watch it several times, and the one that bought it watches it religiously every other night on his tablet. He is 1 going on 61 it is funny to see him being so independent... I now hide to unlock the movie though.
6 people found this helpful

SamiReviewed in the United States on January 24, 2020
1.0 out of 5 stars
Thank you
Verified purchase
I can’t wait to watch the movie with my son!!!

I just don’t want a broken DVD case.
Thank you for the new movie.
Then to add the return should be free....
yeah right, the cost to pay for printing the label out at the store is more than half the movie!

Amazon RichardReviewed in the United States on April 28, 2021
4.0 out of 5 stars
Improved!
Verified purchase
This movie continues the story begun in Despicable Me, and is cute. I enjoyed it and will watch it again.

Personally, I like this one a bit better than the original - each has some really great spots (Margo trusting Gru at the end of #1 is simply superb). Both #1 and #2 are far better than #3.

I know that music is a personal thing: personally, I find the music jarring and I don't really like it.

Another unfortunate (and unintended) consequence of the release of the "Minions" movie (which I like a lot) is that it makes one wonder why the Minions are still sticking around Gru, since he went "good" at the end of the first film. He would no longer be what they were looking for.

OHReviewed in the United States on July 26, 2017
5.0 out of 5 stars
Cool movie & very funny!
Verified purchase
My kids have watched this movie multiple times. We highly recommend this movie and the first Despicable Me movie.

P.S. People we've talked to sometimes get the various Minions-related movies mixed up. Please note that we do NOT recommend the first Minions movie, which has the character Scarlett Overkill...my eldest copies her every movement and motion. We tried to allow her to watch that Minions movie and tried to teach her not to copy Scarlett's bad traits and actions but we were not successful. So, while she's in this phase (2.5-3 yrs), we have decided to temporarily move it to our hidden DVD library :) until she's older and better able to understand our guidance. Other than Scarlett Overkill, whose character is too "over" the top for me, the Minions movie is funny and well-done; but, it is only suitable for older kids. I'm not an expert, but my personal recommendation would be for children at least 7-8 years old, depending on each child's maturity progression.
8 people found this helpful

faffodReviewed in the United States on January 3, 2015
4.0 out of 5 stars
Digital Download is expired. [updated review]
Verified purchase
Edit: Since my review I was able to resolve this issue with Universal Support. They lose one star for making me look up their support email and jump through hoops to get the digital download. On the plus side they didn't try to foist ultra violet on me, I was able to chose iTunes for my download.

Original Review:
The movie is great. The product sold is a rip off. The digital download disc WILL NOT WORK if you try to use it after 12/31/2014. Don't waste your money on this version, get one without the digital download. And if you want the digital download, well you'll have to find some other means because apparently hollywood doesn't want to sell it to you. (But they will take your money letting you believe that you are getting it).
Why they set an artificial expiration date I have no idea. There's no good reason for it.
8 people found this helpful

Betty L. WilkinsReviewed in the United States on May 10, 2014
5.0 out of 5 stars
A great sequal..........................
Verified purchase
Here, Gru has settled into a somewhat normal life with his adopted daughters as he manufactures jams and jellies, but it is easy to see that while he can give into the normalcy of his life, others can not. Dr. Nefario, his assistant has decided to move on to better opportunities, leaving Gru behind. It is at this time, that Gru discovers his life is not quite as complete as he had hoped as his daughters and a pushy neighbor have decided to help push him into the dating scene, with some rather strange results. Along comes Lucy Wilde, an agent for the anti-villain league who has orders to bring in Gru to recruit his help when a top secret lab and the serum they were working on goes missing. Gru reluctantly agrees and they find their hunting ground is the nearby mall. In the meantime, someone is kidnapping the minions and turning them into unstoppable monsters. Gru recognizes El Macho, a villain thought dead and soon discovers how fathers feel about their daughters dating for the first time when Margo discovers Antonio-who just happens to be the son of the villain they are seeking. Lucy discovers that Gru is the person she has come to love, and Doctor Nefario has to decide between his new job--and family when Gru steps in to save Lucy--and his minions from the notorious El Macho.
One person found this helpful
See all reviews
Back to top
Get to Know Us
Make Money with Us
Amazon Payment Products
Let Us Help You
EnglishChoose a language for shopping. United StatesChoose a country/region for shopping.
© 1996-2021, Amazon.com, Inc. or its affiliates