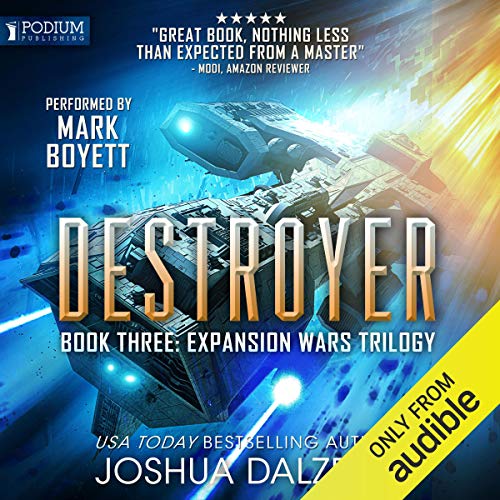 A relentless enemy.... An old wolf's last hunt.... The future of two species hanging in the balance.

The Darshik war machine is flagging, but the war is far from over. Even as an exhausted Federation military tenses up for a counterattack after repelling the last Darshik invasion, reports are coming in of a new, more powerful class of ship that's striking deep into Terran space.

Captain Jackson Wolfe has been given the fleet's newest, most advanced destroyer and tasked with eliminating this new threat before it can claim any more human lives. What he finds, however, is immeasurably more dangerous than just some new class of starship...it's a horror that could lead to the destruction of both their species if it isn't stopped.

Destroyer is the third book in the Expansion Wars Trilogy and part of the number one best-selling Black Fleet Saga.

Your audiobook is waiting!
Learn more about Membership
List Price: $29.99
You Save: $9.00 (30%)
By completing your purchase, you agree to Audible’s Conditions Of Use
Sold and delivered by Audible, an Amazon company

M. T. Dewe
5.0 out of 5 stars Exactly the ending the Expansion Trilogy deserved
Reviewed in the United States on October 7, 2017
Verified Purchase
Been eagerly awaiting the conclusion to this trilogy, as soon as I was back from class I sat down and read it cover to cover.

Destroyer rather nicely brings to a close most of the major arcs that had been building ever since Warship, the first book of the Black Fleet Trilogy, while still leaving the story a place to move forwards, albeit with a "new" cast.

The editing was well done and the only thing I noticed was one small continuity error between adjoining paragraphs. I've been reading a lot of self-published books on Kindle Unlimited lately, and the number of typos, grammatical errors, and continuity errors had slowly been driving me insane. It was very refreshing to read a book that has been proof-read.
Read more
8 people found this helpful
Helpful
Report abuse

USAussie
5.0 out of 5 stars Ship vs Ship
Reviewed in the United States on June 15, 2022
Verified Purchase
Senior Captain Jackson Wolfe has been recalled to service. Initially to be Administrator of a top secret research project. Then as Captain of the TFS Nemesis the newest, fastest, baddest destroyer in star fleet.
The alien ship Specter has continued on it race of destruction through Terran Federation space, ultimately destroying a space station with over 400,000 lives lost. Captain Wolfe is tasked with seeking out and destroying Specter.
Read on and enjoy this marvelous continuation of the Black Fleet Saga.
Read more
Helpful
Report abuse

Kindle Customer
5.0 out of 5 stars The underdog is the hero again!
Reviewed in the United States on November 13, 2017
Verified Purchase
This Trilogy is a great addition to the 1st series of books in that the main character Jackson more, continues to struggle against prejudice and preconceived biased and every step of the way. Even though he has proven himself repeatedly and prior wars and engagement's the continues to succeed where most would fail. I feel that 1 of the most interesting parts of the book is that even though the main characters is very stoic, he also has a heart of gold when considering the abilities of his subordinates and his willingness to see them excel beyond their current rank. It is always easy to condemn those the under perform, but it is rare to see one who will help a subordinate break out beyond the restrictions of their position or rank. The captain Wolfe character excels in this area while continuing to show that he can excel while most others wouldn't even be brave enough to attempt the tasks he performed.
Read more
One person found this helpful
Helpful
Report abuse

okcsrpaul
5.0 out of 5 stars The Black Fleet rides - aa or soars - again with Captain Wolfe!
Reviewed in the United States on March 28, 2018
Verified Purchase
I have enjoyed all three of the .Black Fleet stories but this one was a little different. There was more thought into the situations and having the Cube made it more interesting. The story showed us more of the real Jackson Wolfe who had married and became a father. Before, he was this dare devil capital but this time, it was a lot more mature and analytical. All three books are a great read for those that like science fiction. I really look forward to more of J. Dalzelle books and stories. DON'T STOP WRITING!
Read more
Helpful
Report abuse

tech craft
5.0 out of 5 stars Superb Reading
Reviewed in the United States on January 5, 2021
Verified Purchase
Absolutely a joy to read this book. I couldn’t put it down, stayed up way into the wee hours just to finish it. I have enjoyed the entire series. As an avid military sci-fi reader this series it was refreshing to see the battles occur over days and the necessity around keeping the crew fresh and ready while enduring ling periods of waiting. Most space ship battles in other books occur in a matter of minutes.
Read more
Helpful
Report abuse

Steven Kellar
5.0 out of 5 stars Exciting conclusion
Reviewed in the United States on April 20, 2022
Verified Purchase
This part of the story arc is ending. It is filled with plenty of action and intrigue. Looking forward to what is next.
Read more
Helpful
Report abuse

Scott
5.0 out of 5 stars Satisfying
Reviewed in the United States on May 25, 2021
Verified Purchase
Familiar characters doing their best in trying circumstances. A truly evil villain with horrific ambitions and seemingly the upper hand. Intermittent loss and gain. Those are great ingredients for a very satisfying read. And that is exactly what this book was. No wonder I remain hooked.
Read more
Helpful
Report abuse

Rich
5.0 out of 5 stars Great series
Reviewed in the United States on December 27, 2021
Verified Purchase
I hope he does write other stories carrying on the characters while continuing to build newer ones like he has.
Read more
Helpful
Report abuse
See all reviews

OlaOnline
4.0 out of 5 stars 4 star Space combat very enjoyable
Reviewed in the United Kingdom on January 10, 2018
Verified Purchase
In my opinion, Joshua Dalzelle continues to be the most Credible writer in this Genre available in Kindle. The books in This series about Space warfare during human expansion into space are very well laid out, consistent and disciplined.

However, i hope this volume is not the begining of a trend towards errors and loss of grip on the little science there is. Grammatic errors are noticable even to me(my English is middling), Reactionless drives and G forces ? enuff said.

Anyway, the plot and the combats are well realised, and it was an enjoyable read over a few stttings. The little things aside, this little volume is superior to most of the Dross I have bought on kindle over the last couple of years, 4 stars
Read more
2 people found this helpful
Report abuse

Amazon Customer
5.0 out of 5 stars Epic!
Reviewed in the United Kingdom on June 20, 2021
Verified Purchase
The entire series needs to be seen on the screen. Vast epic universe, sensible and realistic tech and strong characters with twists. If you like your space battles expansive and thrilling, and a great narrative start right at the beginning!
Read more
One person found this helpful
Report abuse

pottheball dammit
5.0 out of 5 stars Jackson wins again
Reviewed in the United Kingdom on January 19, 2018
Verified Purchase
This was a very dramatic read, our rogue Captain taking on another mission which was a big secret. Espionage and political process in this adventure, were intriguing with some excellent story lines. So with that said, I'm ready for the next chapter.

I'd like to thank you Joshua Dalzelle for the great adventures and it would be a pleasure to read the next instalment.
Read more
One person found this helpful
Report abuse

Aaron
4.0 out of 5 stars Damned good show old chap!
Reviewed in the United Kingdom on May 26, 2021
Verified Purchase
Good book... Satisfying conclusion to trilogy. Would like to read even more from this author.

Characters are properly fleshed out, every facet of the universe is properly portrayed... No magical McGuffins or Mary Sure types. No lazy tropes or desperately crowbarred in politics.

Mr R
5.0 out of 5 stars Excellent story.
Reviewed in the United Kingdom on September 25, 2021
Verified Purchase
I read Black Fleet Saga book one years ago. I enjoyed it, but forgot about it by the time the sequels came around (I read a lot of books). In 2021 I noticed it again and reread it, this time I read all available books in around 3 weeks. I cannot wait for the conclusion of the third trilogy next year.
Read more
Report abuse
See all reviews