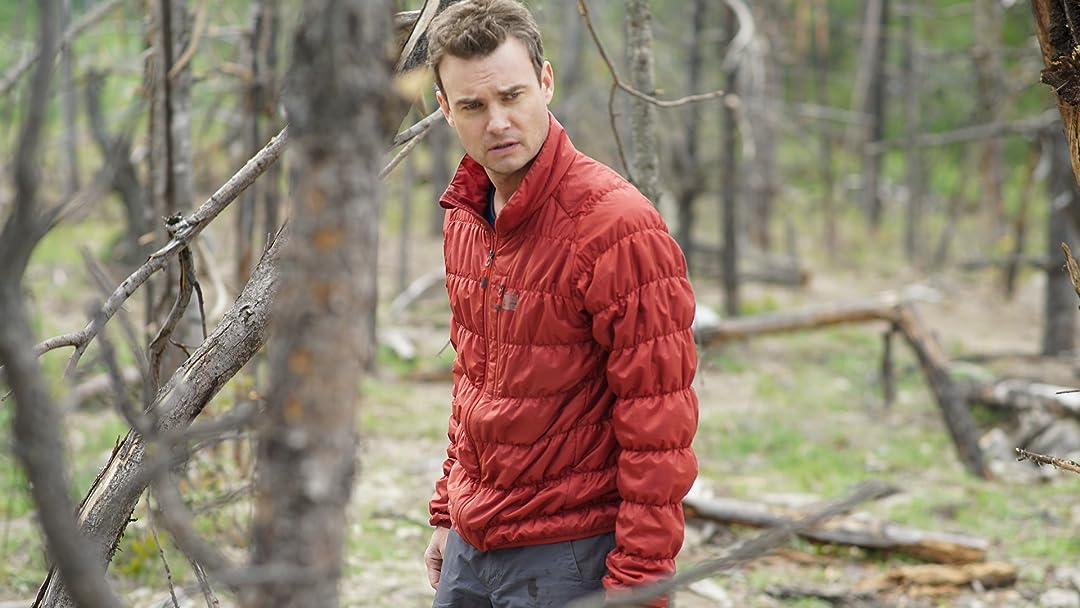 Devil in the Dark

(167)
1 h 21 min201716+
Two brothers, Clint and Adam, are on a hunting trip in the woods. Unbeknowst to Adam, Clint brought along their father's ashes, wishing to spread them there. Cut off from civilization, they notice a mysterious creature stalking them, all white and with uneven deer antlers coming out of the back of his skull. Clint and Adam must survive this creature, who has sinister intentions for the brothers.

MotReviewed in the United States on January 3, 2021
1.0 out of 5 stars
Leftist propaganda
Verified purchase
The entire movie is propaganda by the left to preach how stupid and backwards the right and all of middle America are. If you can get past the cringe tier self-righteous communist wearing t-shirt, anti gun, anti family, anti hunting, moral high ground of the character you may feel like you're watching an attempt at a monster movie.
31 people found this helpful

Victoria J. DennisonReviewed in the United States on May 26, 2018
4.0 out of 5 stars
Devil in the Dark
Verified purchase
The movie had a good plot and the ending was unsettling. The only thing wrong with it was that I didn't know what the thing in the woods actually was. SPOILER; I suppose it was a demon who picked out the child to use as a vehicle; so when the child grew into an adult and went back into the woods the demon got him. At first I thought it was a forest guardian that legends speak of, then I thought it was an alien. But, since the pupils turned coal black in the human (which usually signals a possession in movies) I decided it had to have been a demon. The acting was really good with the older brother and the film was suspenseful. I gave it four. Hardly any blood or gore, but it has a lot of atmosphere and the film permeates dread.
24 people found this helpful

m. olaf hinzReviewed in the United States on March 13, 2020
5.0 out of 5 stars
moody & extremely well-done; kudos for very hip comic book references
Verified purchase
Other reviewers have delineated this film's (original/superior title THE PLATEAU) many strengths; from the acting (Dan Payne as "Clint" is brilliant) to the script to the camera work/editing to how certain shots are set up (one in particular: crow in foreground, action happening in relative distance). Something seemingly overlooked has to do with a flashback sequence featuring the brothers as pre-teen kids in their bedroom. "Adam" is reading not just any comic book, but, rather one of the magazine reissues of Will Eisner's classic/groundbreaking THE SPIRIT (acknowledging the problematic character of Ebony White; a great character rendered as an unfortunate caricature). Further underscoring a young comic book enthusiast whose taste extended beyond the mainstream, the wall is adorned with posters of the, shall we say, "troubled" Fletcher Hanks' FANTOMAH and Wally Woods' T.H.U.N.D.E.R. AGENTS. (As evidence that "Adam" is no snob, there's also a panel blow-up from, it would seem, an issue of D.C. Comics' silver/bronze age Justice League.) His interest in off-the-beaten path fantasy could very well have been catalyzed by the childhood experience in the woods which opens the film, and, from there, his ultimate fate. (That, and the fact that the filmmakers simply couldn't resist and a nod and a wink to a particular subset of comic book fans.) Lastly, I really hope there's no sequel as over-explanation often ruins the mystique (as shown by the director's cut of DONNIE DARKO).
9 people found this helpful

ZraitorReviewed in the United States on June 6, 2020
4.0 out of 5 stars
Finally a movie with a focus on scenery that doesn't use that as an excuse to be slow.
Verified purchase
Two brothers try to reconnect through a hunting trip. One is very outdoorsy and loves hunting, the other hates it. They mostly fight and bicker until something begins hunting them.

Most of this movie is dealing with the two brothers' relationship dynamic and that part was done very well. You get to know both of them and this is mostly explored. The only issue with this part is the flashbacks; they sort of just stop abruptly before their relationship with their father is fully explained.

The forest they are in looks incredible and the hiking scenes which are typically boring as hell in other movies were enjoyable here instead. Where other films would have frustrated me using this part as filler here it blends in with the rest of the movie perfectly.

Unfortunately, the horror elements are really underdeveloped and not explained well. Oh, you see the creature fully but it is never really fleshed out and I'm not sure what it was all supposed to mean. There can be a power in that not knowing but I was a little let down here. This is the main problem with the movie, it doesn't show enough outside the brother's relationship.

Where most movies I think are too long and contain filler this one however really could have used another twenty minutes or so to beef this up. It was great otherwise and I wish there was more. The ending was creepy but lacked a bit of punch for this reason in my opinion.

HoppyRooReviewed in the United States on August 13, 2021
3.0 out of 5 stars
Almost 150 other reviews... Here's mine...
Verified purchase
Some previous ratings seemed extreme... before I get into some of my comments, here is my rating system

1 - This movie should never have been made. I likely didn't even finish it.
2 - I watched the whole thing... It was bad. Would never recommend to anyone.
3 - The movie was "o...k...". Generally a soft-recommend from me. I personally wouldn't watch again.
4 - Movie was good/solid. Decent to Good odds on me watching it again in the future.
5 - I need to call my friends RIGHT NOW!

So, let's start with the basics

Camera Work / Audio / Lighting - all fairly well done... ( maybe a little left to be desired on the soundtrack, but even that wasn't too bad... ) ( side note... there were a handful of shots towards the end that were extremely dark... )

Acting - I'd say surprisingly good for this genre/style. ( which also implies that the script was written fairly well )

Plot - Is not "entirely" new, but I suspect you have to be a movie buff like me to know that... Yes, I know of 2 other movies that had very similar plots off the top of my head. Either way, I would still class this as pretty unique in the sense that they attempted a merge of a brotherly "rivalry", coupled into a creature feature, etc...

SFX - Meh... They didn't do a lot. It tended to rely more on camera work and lighting rather than actually seeing any visible SFX... ( which isn't always a bad thing... bad SFX could have ruined this movie... so I think the route they chose might have been a good one... )

So... I thought the movie was generally suspenseful. The jump scares weren't really all that scary, but they could be to some.

I thought the dialogue in the movie was fitting ( In fact, I can actually relate, as I barely talk to 1/2 of my cousins as they live out in Western PA, while I live in NJ... although wearing a Che G shirt is pushing it... No, I don't watch NASCAR, and no, I don't follow the Pitt Steelers... I'm more than happy to just play music in my home studio... )

Bottom line... I generally liked the movie. It left a couple questions at the end, but if you have an imagination, I suspect you can figure it out... I give it 3 stars with a soft-recommend for fans of suspense / horror. I will likely not bother watching again, but if you are bored on a rainy night or something, you can certainly do a lot worse...
3 people found this helpful

DanicaReviewed in the United States on June 28, 2018
4.0 out of 5 stars
Spoilers.. Good Movie.. Want More
Verified purchase
I am conflicted; I thought it was a really great movie, I want to watch it again to see if I missed anything. I know some people loved it or hated it, but I'm in the upper percentile of liking it. I thought it was suspenseful, with a good story, likable characters for whom I wanted to see bond, & become close, to fix the childhood rivalry. The devil was only a small part of the content, but it did give me the chills & suspense to keep watching to understand what it wanted. I'm not sure what really happened at the end, definitely surprising, but a wtf moment... I would watch & want a sequel with the same actors, & more of the story revealed. It's definitely not a horror plot I've seen before, and I do love the campy type horror movies. Also, nothing is mentioned about the brother's mother, unless I missed that part.. Maybe a good opener for the sequel... 😊 🙏
14 people found this helpful

Patti58Reviewed in the United States on April 20, 2019
4.0 out of 5 stars
Finally
Verified purchase
Finally a well made eerie horror movie that depends on a good story, good acting, and characters you care something about. If you're looking for a teenage slasher film you won't find it here. Some may consider it too slow because it centers more on the brother's relationship with one another and their past rivalry rather than the "Devil in the Dark". For me, though, this only magnifies the horror. Don't want to give anything away but for a little known, lower budget film I thought it was pretty good. Just don't go in expecting a big budget Hollywood blockbuster-type movie with all the frills.
10 people found this helpful

AnonymousReviewed in the United States on April 1, 2022
4.0 out of 5 stars
Good Film (SPOILERS!)
Verified purchase
As other positive reviewers mentioned, this film is impressive in particular because it appeared to be a smaller-budgeted production. But it was effective and had me interested throughout. I think the key to understanding the film more seriously, at least for my own way of seeing it, is to view it psychologically. The "woods" represent the wild of the unconscious mind, and so the rivalry between the brothers may be understood to be a shared part of each of their deeper minds- their own fears, conflicts, and disowned parts of themselves. The "devil" could be understood to be the product of a shared delusion, symbolizing the disowned "Spirit" of the comic book fantasy world of the younger brother, a "spirit" takes on the identity of the cause of his paranoia, fed by the rejected part of himself. This unconscious part becomes the albino hunter, a theme the younger brother finds disturbing to his conscious mind, but unconsciously identifies with. Ultimately the older brother comes, at least in the symbolism of the film, to share the unconscious material as well, and eventually "sees" his younger brother as dead, whereas he is not. This is one possible explanation for the ending. Anyway, that is my "two cents," with some help from another reviewer who reminded me of the comic book scene, which added material for my analysis. Thanks to him, and to the other folks who gave this film some appreciation in their reviews! I thought it was memorable.
See all reviews
Back to top
Get to Know Us
Make Money with Us
Amazon Payment Products
Let Us Help You
EnglishChoose a language for shopping. United StatesChoose a country/region for shopping.
© 1996-2022, Amazon.com, Inc. or its affiliates