Devil Tree and millions of other books are available for Amazon Kindle. Learn more
Share <Embed> 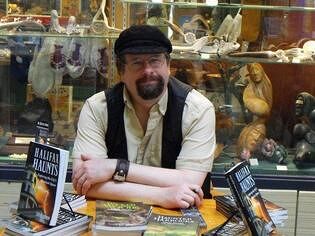 by Steve Vernon (Author)
3.9 out of 5 stars 21 ratings
See all formats and editions
Sorry, there was a problem loading this page. Try again.
Read more Read less
Previous page
Next page

Start reading Devil Tree on your Kindle in under a minute.

3.9 out of 5 stars
3.9 out of 5
21 global ratings
How are ratings calculated?
To calculate the overall star rating and percentage breakdown by star, we don’t use a simple average. Instead, our system considers things like how recent a review is and if the reviewer bought the item on Amazon. It also analyzes reviews to verify trustworthiness.
Top reviews

T.T. Zuma
5.0 out of 5 stars Very Dark, And Brilliant!
Reviewed in the United States on March 6, 2011
Verified Purchase
I've been a fan of Steve Vernon's since "Long Horn, Big Shaggy" came out in 2004. I've scoffed up everything he's published since then and "Devil Tree" ranks up with his finest work.

This one is a bit of a departure for Steve; it's dark, way dark. Though Steve has broached the themes of murder, gore, and eroticism in the past, never has he combined them in a tale that is as brutal and soul searching as he has in Devil Tree. The birthing scene alone, when Jezebel (Duvall's mate) pushes out her disgusting spawn to be sacrificed to the Devil Tree is about as gruesome as it gets. And anyone who has had a cheating spouse can't help but share the mental anguish that Lucas suffers.

As I've discovered with his prior novels, "Hard Roads" and "Gypsy Blood", Vernon isn't content to just drag his readers into the depths of his horrors blindly. He reaches into the parts of all of us that we aren't too comfortable with, and then he grabs these fears by the throat and forces the readers to confront them. Fading love, guilt, betrayal, and lust all play a part in our lives and Vernon has done a brilliant job confronting these troubling aspects in "Devil Tree".

So yeah, I loved "Devil Tree", and I think anyone who picks this up will too.
Read more
10 people found this helpful
Helpful
Report abuse

Wenderella
5.0 out of 5 stars Glad I didn't miss it
Reviewed in the United States on October 10, 2018
Verified Purchase
This book was thoroughly fulfilling. It was pleasantly descriptive and wove a haunting, dark tale that I couldn't put down. The first book of Steve Vernon's I have read, I have nothing but praise for his smooth style and detailed character portrayals. The scenic descriptions were so vivid I felt as if I were with the characters in location. I love horror and this is very unique -- a truly evil feel without lots of blood, gore or sex, just old evil that is insidious and unstoppable.
Read more
One person found this helpful
Helpful
Report abuse

Kevin M. Hopson
4.0 out of 5 stars Nice pace and mystery to this story
Reviewed in the United States on April 21, 2012
Verified Purchase
This is the first time I've read Steve Vernon, so I wasn't sure what to expect. First of all, the book is beautifully written with its detailed description and imagery. Though it was tedious to get through at times given the abundance of detail, I found myself getting used to it as I moved along. The story started out a little slow, but once Duvall showed up, things took a turn for the better. Duvall is a difficult man to figure out. I wasn't sure if he was good, evil, or something in between. In any event, his character - and the mystery surrounding him - added to the creepiness of the whole story. There are some gruesome parts to this tale. A couple of them even forced me to collect myself before continuing. The book, however, is not a drawn-out gore-fest by any means. The specific instances that are meant to disturb serve a purpose. Overall, I really enjoyed the pace and mystery of The Devil Tree. As a writer myself, I like to leave certain parts to the reader's imagination. While some like to have everything neatly tied together by the end, I don't mind that Steve leaves us with an element of the unknown.
Read more
4 people found this helpful
Helpful
Report abuse

This book is... *evil*. Don't know what or how this body of work came into existence, but I think Steve went to some very dark places to bring it back into the light. Even then, it's a dark piece of horror fiction, extremely moody, and creepy as all hell. If this was a movie, it'd be one of those flicks where you would notice the absence of music, where the only sounds are those made by the characters, or things pulling themselves free of the earth, and where you might have anxiety attacks when the night scenes start. There isn't a lot of gore, but dread permeates this whole story like the stench of bad meat becoming worse.

I liked it. God help me I did.
Read more
5 people found this helpful
Helpful
Report abuse

Julianne Snow
4.0 out of 5 stars Dark and Edgy - Just the Way I Like Them!
Reviewed in the United States on April 22, 2012
Verified Purchase
I recently had the opportunity to read Devil Tree by Steve Vernon. Admittedly, it might not have been a book I would have picked up to read, but it would only have been due to the fact that it wasn't even on my radar. The blurb on Amazon.com reads just like this:

In the beginning of the book, I found the language, descriptions and characters to be a little bit tedious. I can remember looking down at my Kindle, seeing that I was only about 15% in and wondering how I was going to get through to the end... I persevered however, and was glad that I did.

As I past the point where normally I would have put down a book, Vernon's descriptions became fluid and expansive; the dark fantasy involved was fantastic - he just gives you enough to paint the picture once you close your eyes. I found the characters to be written with that edge of believability that draws them just a little bit closer into your world. With Duvall, you're not sure if you're meant to like him or loathe him. It's an odd reaction at times, he was helpful but within the vein of malevolence. Lucas was such a torn character; alternating between his inner demons and his reactions to the situation he has been thrust into. His inner turmoil was echoed in the arching turmoil of the entire story. On the other hand, Tamsen was such an enigma - her disconnect from just about everything that was going on around her was delightful in its vacancy. And yet, in the end, you came away knowing more about Tamsen than what you initially got from the words written about her. Jezebel might just have been my favourite character of all - I just loved the roughness with which Vernon chose to describe her. As a character, Cord was the epitome of innocence and of innocence being corrupted. As a cast, they covered all of the main archetypes in horror and then some. The parts are complete when you add in the evil Jack Pine itself. There's a reason why it's titled Devil Tree.

The only criticism that I can offer is that the story took too long in the beginning to grab me. Part of that has to do with the fact that, to me, the prose felt somewhat disjointed in those first pages. While I can see the benefit of the disjointed prose in the beginning given the subject matter and scenes that were taking place, it was distracting.

In summation, Devil Tree is a dark and edgy book. While I had a hard time getting into it, by the end, I was glad that I stuck with it. At times, it was beautiful while at others it was filled with such vividly horrific moments that I wished I could turn my eyes away.
Read more
One person found this helpful
Helpful
Report abuse
See all reviews

fluffyredfox
2.0 out of 5 stars sorry sorry sorry!
Reviewed in the United Kingdom on April 5, 2012
Verified Purchase
I will start this review by saying that had I not been reading it for a FB group review 1. I would not have picked it to read 2. I would have put it down long before the end.
This book was just NOT for me...
I found nothing scary in it, other than I thought I needed to be high or drunk to read it... and the endless meaninless describtions bored my socks off....
I lost the plot a few chapters it... nothing the 2 main men said made any sense to me... the 2 main women just confused me and the describtion of sex and birthing left me feeling a little sick.
I was upset by the needless describtions of torturous animal kills....
I missed the whole issue with the salt?
random characters seemed to float in and out... when I thought someone had died they popped up 2 chapters later.
Most ppl seem to love this book so I am obviously the odd one out.... it was just not to my taste, sorry.
Read more
One person found this helpful
Report abuse

Kindle Customer
4.0 out of 5 stars Twisted, compelling
Reviewed in Canada on February 6, 2017
Verified Purchase
Really not sure what else can be said.
Didn't really like, nor even understand the tale, yet had to keep reading. I guess expecting it would finally reveal some sudden story with the 'next' turning of the page.
Much like a certain movie of a bunch of college kids who trek through a jungle to find a hidden pyramid, only to find..well, THAT would spoil both this story and that movie.
Read more
Report abuse
See all reviews
Back to top
Get to Know Us
Make Money with Us
Amazon Payment Products
Let Us Help You
EnglishChoose a language for shopping. United StatesChoose a country/region for shopping.
© 1996-2021, Amazon.com, Inc. or its affiliates