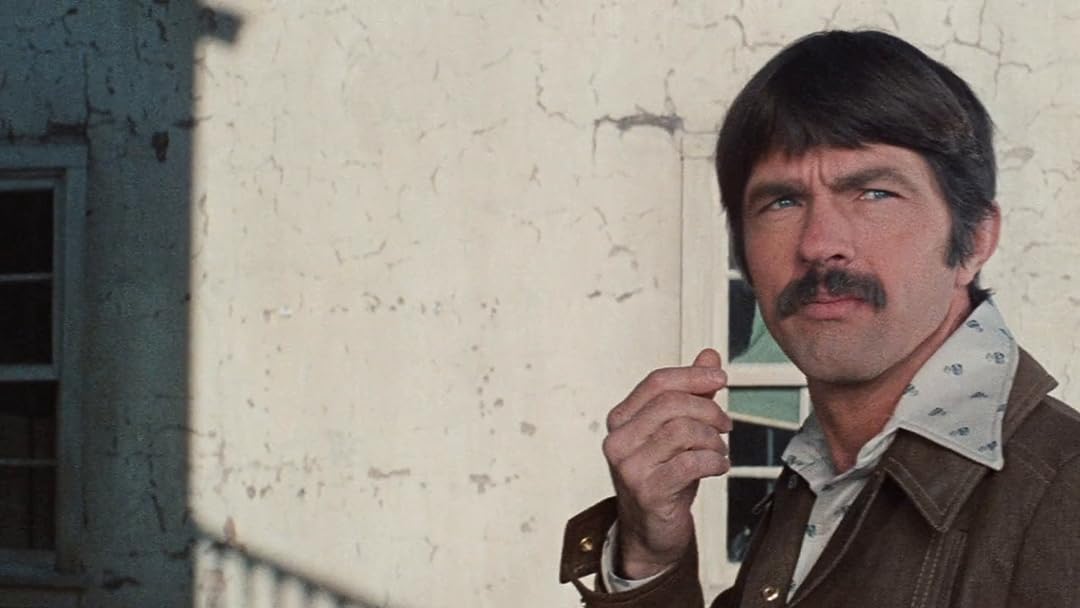 (311)
5.11 h 25 min1975PG
A satanist cult leader is burnt alive by the local church. He vows to come back to hunt down and enslave every descendant of his congregation, by the power of the book of blood contracts, in which they sold their souls to the devil.

the scuNkReviewed in the United States on March 25, 2017
5.0 out of 5 stars
Excellent old school horror, way off the beaten movie path
Verified purchase
I really liked this movie, but it does have some things about it that need to be put to rest before you judge it. First of all...

lt is a low quality film by many mainstream standards. lt has a lot of lame acting. The storyline is not totally coherent and/or consistent. lt is overall, a corny, 70s horror movie about Satanic greater magic rituals. So bear all of that in mind, mentally prepare to appreciate that kind of movie, and allow yourself to be entertained by it. Here's where l'll explain the reasons l love it:

Devil's Rain has some really great actors in it. William Shatner and Tom Skerritt play frontline roles as, you might traditionally say, the 'good guys.' Their characters represent stereotypical, morally lukewarm Christians, at odds in the movie with a cult. This cult, headquartered in a desert ghost town, is led by Jonathan Corbis, played amazingly by Ernest Borgnine. His character Corbis, furiously devoted to Satanic worship, has time travelled by way of black magic as a demon shapeshifter to pursue the Preston family, them being descendants of the 17th century pilgrim group that delivered Corbis to witch hunters.

As if to give more hardcore fans a little easter egg they'd have to look for, Anton LaVey is very briefly in the film as a priest in Corbis' rituals. Also making a random appearance is a young John Travolta. Both of these men have hyper brief roles and barely utter 3 lines between them. Hands down though, the scenes with Borgnine playing the most unexpectedly convincing role of a deathly passionate sorcerer, absolutely make the movie. His voice, his evil looking eyebrows, the striking red robes he wears, his over-the-top yet perfectly executed lines... This is gold, really. In a super obscure movie like this, too.

lf you like old horror movies, 70s horror movies, movies about devil worship, etc, any or all of the above... watch this dam movie. Hell, buy it, it's like less than $10, used. Borgnine's acting is incredible, grisly gore effects cap off the ending, the occult rituals and imagery are authentically enacted, and you have the mega flavour that comes with this type of low budget, high enjoyability film. Devil's Rain is a gem, and an absolute must-have for obscure movie fans and occult aficionados.

M. HammonReviewed in the United States on March 20, 2018
1.0 out of 5 stars
BAD MASTER!
Verified purchase
First I have to say I love this movie. The cast is awesome. UNFORTUNATELY this pressing/mastering is flawed. I believe it is at around 15 minutes in the screen starts to digitally smears. I tested it on two players and it did it on both. I also purchase 3 separate copies (2 from other stores located around me (Amoeba & Rasputins) both of those copies did the same thing at the same time stamp. I have reported it to Severin via their website and it's been over a month and they have not replied.
13 people found this helpful

Francis Booth LynchReviewed in the United States on December 22, 2017
1.0 out of 5 stars
FINALLY a positive spin on the Salem Witch Trials
Verified purchase
Movie 8 of 1975 and 29 overall in my journey through films of my lifetime.

So have you ever thought, "What if the victims of the Salem Witch trials were actually guilty?" Yeah I know, I haven't either, and it is the most meager element of "The Devil's Rain" but probably one of its best moments in terms of quality of camp.
I'll go ahead and say that this is one you should watch with friends to get a good laugh. Watching this alone was not great. It had its moments. The opening was exciting and funny. After that it takes a turn for the boring and was never scarry. I'll give credit to the fact that it took place in a ghost town that gave it a western horror vibe that was unique. The term "vessel" was used many times and I thought this was referring to William Shatner's character, whom oddly acted almost exactly like James T Kirk. The surprise to me was that it was actually referring to a macGuffin that housed the souls collected by the devil. While the movie was focused on Shatner's character it was actually pretty good, but that was given up for an infomercial on Satanism. There would be a Satanism craze in the eighties that horrified many parents so I'm sure this would have been perfect in that time but I'm not sure how it played in the 70's. In the middle of the movie came a look at the cult's existence during the Salem Witch Trials. I'm thinking that the film makers were assuming they had found a universal enemy to couch the cult to make them look cool. It really added very little and muddied the plot. Ultimately "The Devil's Rain" was aimless and confusing. It also didn't satisfy as camp as well as many other movies like "The Room" or "Firestorm" to name a few.
Pros
-some unintentionally funny moments
-unique elements
-strong beginning
-all star cast list
Cons
-not campy enough
-too slow at times
-disjointed and confusing
8 people found this helpful

Physics ProfessorReviewed in the United States on July 18, 2020
2.0 out of 5 stars
pastel gore!
Verified purchase
The only point of interest for this movie is the surprising number of solid, if B-level, actors in it. That's the only reason for the second star.

Normally I would not point out badly dated special effects, but in this case they seem to be a good metaphor for the whole film. There are many, many, many scenes of zombies melting when exposed to water. This was intended to be shockingly gory, but although it looks a bit nasty, it is only as nasty as mashed potatoes with a lot of pastel food coloring, which might indeed be what they were made of. Seriously, it would have looked much better if they had used more black, black mixed with dark red, and sickly pus yellow; instead it was mostly "flesh tone" and spring green. It fell into a valley between doing too much and too little.

The villain is the only moderately interesting character, though not in a way that lets you root for him. Everyone else is bland and nondescript. The setting makes no sense. The order in which scenes are presented make no sense; at first you might think this is going to be an action/horror, which it is not, or a mystery/horror, in which you will learn along with the characters, but it's not that, either. A good story might reveal that the rules by which the universe really operates are horrible and only partly known, but it should not leave the impression that the writers were making up random crap as they went along -- and that is EXACTLY the impression this leaves.
One person found this helpful

WALTReviewed in the United States on April 29, 2021
5.0 out of 5 stars
AN AMAZING HORROR FILM
Verified purchase
NO SPOILERS. WILLIAM SHATNER.....STAR TREK.......ERNEST BORGNINE, IDA LUPINO, EDDIE ALBERT, TOM SKIRRITT. WHAT AN AMAZING CAST FOR ANY VIEWER TO SEE. MAGNIFICENT ACTING BY SHATNER, AND NOT A SMILE IN THE CAST, ACTORS TOOK IT SERIOUSLY. MOST
DEFINITELY NOT A FAMILY OR MATURE TEEN FILM.......PROFANITY, NUDITY, DRUGS, BIG TIME VIOLENCE , AS AN EVIL SATANIST WANTS
POSSESSION OF THE BOOK OF EVIL TO CONTROL THE WORLD. IN THE LAST HALF HOUR SOME OF THE GORIEST, RAW, AND NON STOP
ACTION AND VIOLENCE I HAVE EVER SEEN. ONLY FOR SERIOUS HARD CORE FANS.
One person found this helpful

eviljimReviewed in the United States on January 12, 2018
5.0 out of 5 stars
All Hail!
Verified purchase
Great. All Hail Borgnine
11 people found this helpful

KaylaReviewed in the United States on October 25, 2020
3.0 out of 5 stars
Nice old school practical effects in this flick but the story and acting goes straight to hell.
Verified purchase
I'm neutral on this one, i really liked some of the old school practical effects but the story was all over the place and the acting was a bit uneven to borderline awful at times, with that being said it's still 75% better than what's being released in the present day.
2 people found this helpful

Music IconoclastReviewed in the United States on June 15, 2021
5.0 out of 5 stars
1970s CLASSIC! MUST WATCH!
Verified purchase
Some really outstanding acting from Ernest Borgnine, who portrays a satanic priest by the name of Corbin. William Shatner, Ida Lupino, Eddie Albert and others including a young John Travolta are all amazing. you won't find many special F/X, but the acting makes up for it by a HUGE margin. I have seen this film many times and it is among my favorites within the horror genre. highly recommended! also, Anton Lavey makes a brief appearance in this 1975 film.
See all reviews
Back to top
Get to Know Us
Make Money with Us
Amazon Payment Products
Let Us Help You
EnglishChoose a language for shopping. United StatesChoose a country/region for shopping.
© 1996-2021, Amazon.com, Inc. or its affiliates