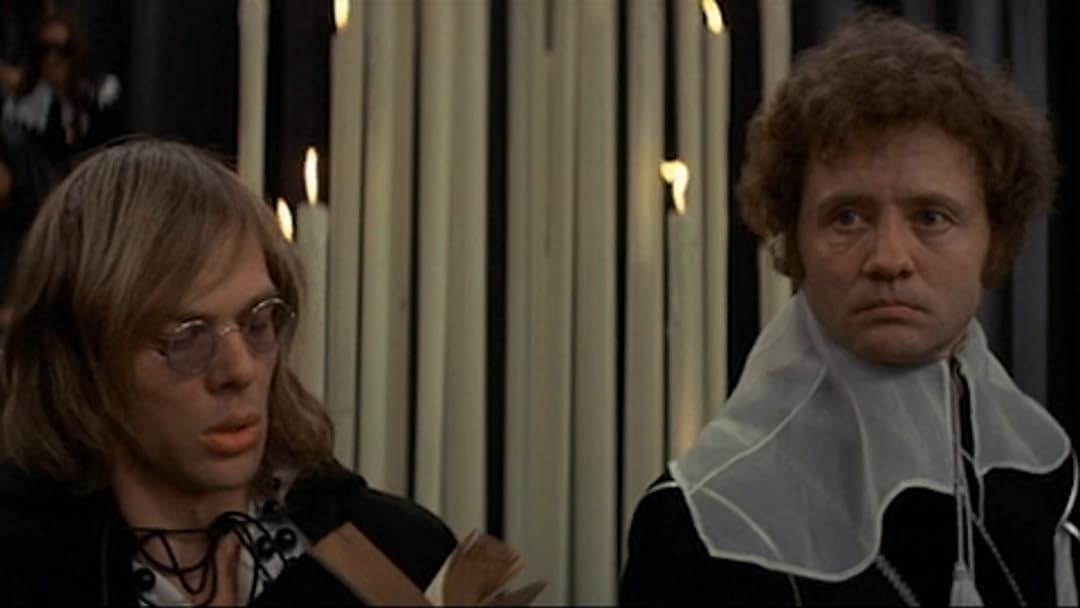 (539)
7.81 h 48 min1971R
Ken Russell’s twisted classic about a nun who accuses a priest of using witchcraft is one of the most controversial horror films of all time.

That having been said, there are two reasons to buy this version of THE DEVILS: 1.) it is an all-region version, so unlike the BFI edition, it can be played on American region 1 DVD players. 2.) Aside from the dreadful VHS pan and scan release from the 1980s, this is the only edition of the American edit now available, and archivists will find that to be of interest.

My advice? Get an all-region DVD player and buy the BFI version.

Charles S. TashiroReviewed in the United States on September 27, 2018
4.0 out of 5 stars
UK version
Verified purchase
Because I was confused by the conflicting reviews, I thought I should note two things:
1) Although this page clearly states that this is region 2 DVD, it bears repeating that the disc will not play on US DVD or Bluray equipment unless you have a multi-region player;
2) To be clear about exactly what cut the disc provides, it is a transfer of the original cut as shown in the UK. As such, it includes material not in the American release. However, it does NOT include any of the footage cut by Russell to meet the demands of the studio or the censors. According to the booklet accompanying the disc, Russell's original cut has never been shown publicly, although some footage was restored for a 2004 screening. The notes state: "At present, the UK-X-rated version remains the most complete version in commercial distribution." That is the version on the disc.

It's a good transfer and definitely worth seeing for anyone interested in this very excessive film, but if you are easily offended or upset, definitely stay away.
16 people found this helpful

Raul GReviewed in the United States on December 19, 2021
5.0 out of 5 stars
Excellent release as expected
Verified purchase
An icónic and for some people, quite controversial film Is release in it's most complete and exciting form to date (that Is if WB ever release The full uncut versión, i have my firgers crossed on that).
This editions Is presentes by BFI, who usually does excente job and does very little to ruin their reputación.
I scanned really quick trough the film and i was pleased with the image, sure it's only on standards definition but for what It Is It was quite good.
The sounds Is very well mixed even if it's only mono and in AC-3.
The extras however are however what i was most interested about, with a nice booklet detailing the restorátion, and with essays by film critics Mark Kermode, Craig Lapper, and Sam Lashby about the story, the filmming process, the style and production design the censorship of the film. Im thelling you, this one Is interesting.
It also has a lot of bonus features, with audio commentaries,a new intro by Kermode. Trailers and a shorts film, this Is only disc one.
Disc two has even more extras with the following documentaries
Hell on Earth- from the year 2002
Director of devils.
Also, footage fron the set and a Q&A with Ken Russel himself.
My only little gripe Is that WB should release this on Blu Ray at least.
Oh well. Both discs are encoded on región 2 so you must have a compatible player in order to play them.

And finally, the devilery had no hassels and arrived on Time.

The package feels quite nice, although mine had some damage on the booklet which comes from the factory and that Is imposible to see unless someone opens the box and flips the booklet. Oh well.

SteversurryhneReviewed in the United States on July 28, 2016
5.0 out of 5 stars
especially Vanessa Redgrave portraying the sexually barely repressed hunchbacked mother superior of the convent
Verified purchase
Something of a cult film, Ken Russell's The Devils is an early production of his in which the historical material is infused with an anachronistic attitude stemming from the sixties in England when it was made. Outrageousness is the key here, and the actors appear to be having a grand time in this, especially Vanessa Redgrave portraying the sexually barely repressed hunchbacked mother superior of the convent. The large number of nubile maidens in the convent gives Russell an opportunity to show lots of breasts and asses of the "possessed" nuns. Look for quotations from Dreyer's St.Joan in many of the interior shots. Reed's substantial persona shines through in this as a flamboyant priest who heretically performs his own marriage to his lover, and who provides a blasphemous suggestion of the imitation of Christ. Like St. Joan, the film culminates in a burning at the stake. Redgrave steals every scene she's in. There actually is a serious historical subtext to this film, adapted from Aldous Huxley's The Devils of Loudon, a non-fiction work, in which we see the beginning of the rise of the centralized nation-state, France, and the end of the Medieval world, in which walled cities like Loudon were virtually autonomous entities which had to be brought to heel by the Paris based monarchy.
16 people found this helpful

Michael W. CooperReviewed in the United States on December 2, 2012
5.0 out of 5 stars
A Mad Masterpiece.
Verified purchase
Filmmaker Ken Russell pulls no punches in this blistering film based on real events that took place in the town of Loudun in the 1600s. Oliver Reed is almost a force of nature in his performance as Father Urbain Grandier, a flawed man of the cloth who is both filled with a worldly lust for power and the pleasures of the flesh, and finally able to see the error of his ways and truly repent. The performance is electric, almost jumping off the screen. You really see the evolution of the man from arrogant womanizer to penitent victim of a conspiracy between the church and the state and finally to martyr. Grandier's popularity and the power that the now deceased Govenor of Loudun bestowed on him makes him a target of those who are conspiring to tear down Loudun's fortifications, and to rid themselves of this willful thorn in their sides. When Sister Jeanne (Vanessa Redgrave), the Mother Superior of the Ursuline nuns who is secrectly attracted to Grandier, begins accusing him of bewitching her and her fellow nuns, a claim that was false, Grandier's enemies have the excuse they need to destroy him. With the arrival of the exorcist Father Barre (Michael Gothard), chaos erupts in the city as public exorcisms - actually nothing more than debauched and blasphemus orgies - ensue, much to the delight of the public, who have had their sensibilities dulled by the ravages of the Black Death. Russell does not so much push the envelope with these scenes as rip the envelope to shreds and burn it to ashes. However, it should be noted that his intention here is not to support the behavior of the hysterical nuns and their debauched exorcists, but to show just how fully religion can be corrupted. Contrast is given in Grandier's dawning realization of his own shortcomings. Through this ordeal, he finally finds peace with himself and with his God, something that eludes his accusers. The film has been subjected to much censorship over the years. One scene in particular is still missing, the so-called "Rape of Christ" sequence where the nuns tear down a large statue of Christ and defile it. This scene was intercut with a scene of Grandier conducting a mass, further illustrating the difference between a flawed man who can acknowledge his mistakes, and people who use religion as a means to a selfish end. Grandier's torture has also been heavily censored, so we are only shown bits of his legs being crushed, but you get the idea. Found guilty and sentenced to be burned alive, the now crippled Grandier is dragged through the streets much to the delight of the very people who loved him not so very long ago. His execution is treated like a circus, with people laughing and cheering as the innocent Grandier is slowly immolated, all the while imploring the people of Loudun to stand up to those who would enslave them. This is a very powerful film, one that deserves to be seen in its uncut form. Until then, we have this version, which is the British X version. See this film. It is a mad masterpiece that deserves to be seen.
23 people found this helpful

ShiloReviewed in the United States on June 8, 2013
3.0 out of 5 stars
A classic movie on a poor-quality medium
Verified purchase
The Devils is a cult classic, with fans and detractors split down the middle. If you're a fan of Oliver Reed you haven't a clue what he could do without seeing his tour de force performance here; Vanessa Redgrave also gives a once-in-a-lifetime performance. There are plenty of reviews, pro and con, about this movie...I won't try to improve on those. What I do want to mention is the quality of the DVD recordings, which have the feel of being recorded directly off a TV with a 1980s video camera; the recording is from a PBS one-time broadcast of the film. This set is currently (as of June, 2013) the only 'uncensored, uncut' recording of the film available anywhere. (I put 'uncensored, uncut' in quotes because the original film was butchered and glued back together so many times that there doesn't exist anywhere an original, uncut version). This one DOES contain the infamous 'Rape of Christ' and several other scenes, which had been removed and thought to be lost forever until they turned up in 2002. Buy and watch this film and you will definitely come away knowing what all the fuss was (is) about. It's just sad the quality of the video is so poor, but until the powers that be decide to release it on studio quality DVD, it's better than nothing.

If you are a real fan, you might also want to buy Richard Crouse's 2012 book, 'Raising Hell - Ken Russell and the Unmaking of The Devils'. Well-written and detailed with lots of backstory on the filming of the movie.
3 people found this helpful

Robin SimmonsReviewed in the United States on December 11, 2011
4.0 out of 5 stars
BRILLIANT, BLASPHEMOUS, DEPRAVED & RELEVANT
Verified purchase
Based on Aldous Huxley's explosive 1952 book "The Devil's of Loudon," Russell's X-rated film stars Oliver Reed and Vanessa Redgrave as a priest and sexually repressed nun in 17th century France. The real, historical priest involved in this church scandal was finally executed for witchcraft following the alleged possession of Loudon. The violent, sexually disturbing and blasphemous film was heavily edited and banned in several countries. The unedited version is hard to find on DVD (or even VHS), but deserves a Blu-ray restoration. (Is Criterion brave enough?)

Regarding the harsh reaction to the film, Russell said: "I wish the people who were horrified and appalled by it had read the book, because the facts are more horrible than anything in the film." And later he's quoted as saying: "I want to shock people into awareness. I don't believe there is any virtue in understatement." Amen.
7 people found this helpful
See all reviews
Back to top
Get to Know Us
Make Money with Us
Amazon Payment Products
Let Us Help You
EnglishChoose a language for shopping. United StatesChoose a country/region for shopping.
© 1996-2022, Amazon.com, Inc. or its affiliates