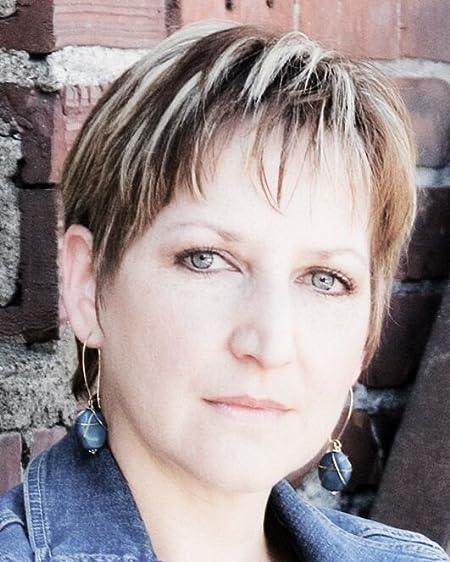 Devon Monk is a USA TODAY Bestselling fantasy author. Her series include Ordinary Magic, Souls of the Road, West Hell Magic, House Immortal, Allie Beckstrom, Broken Magic, and the Age of Steam steampunk series. If it's a Monk story, it's stuffed with magic, action, heart, and humor. She also writes all sorts of short stories which can be found in various anthologies and in her collection: A Cup of Normal.

She lives happily beneath the rainy skies of Oregon. When not writing, she can be found drinking too much coffee, watching hockey, and knitting silly things. 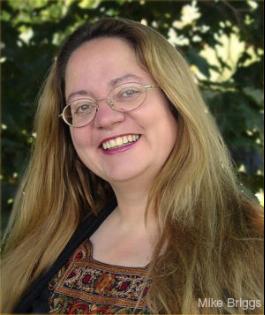 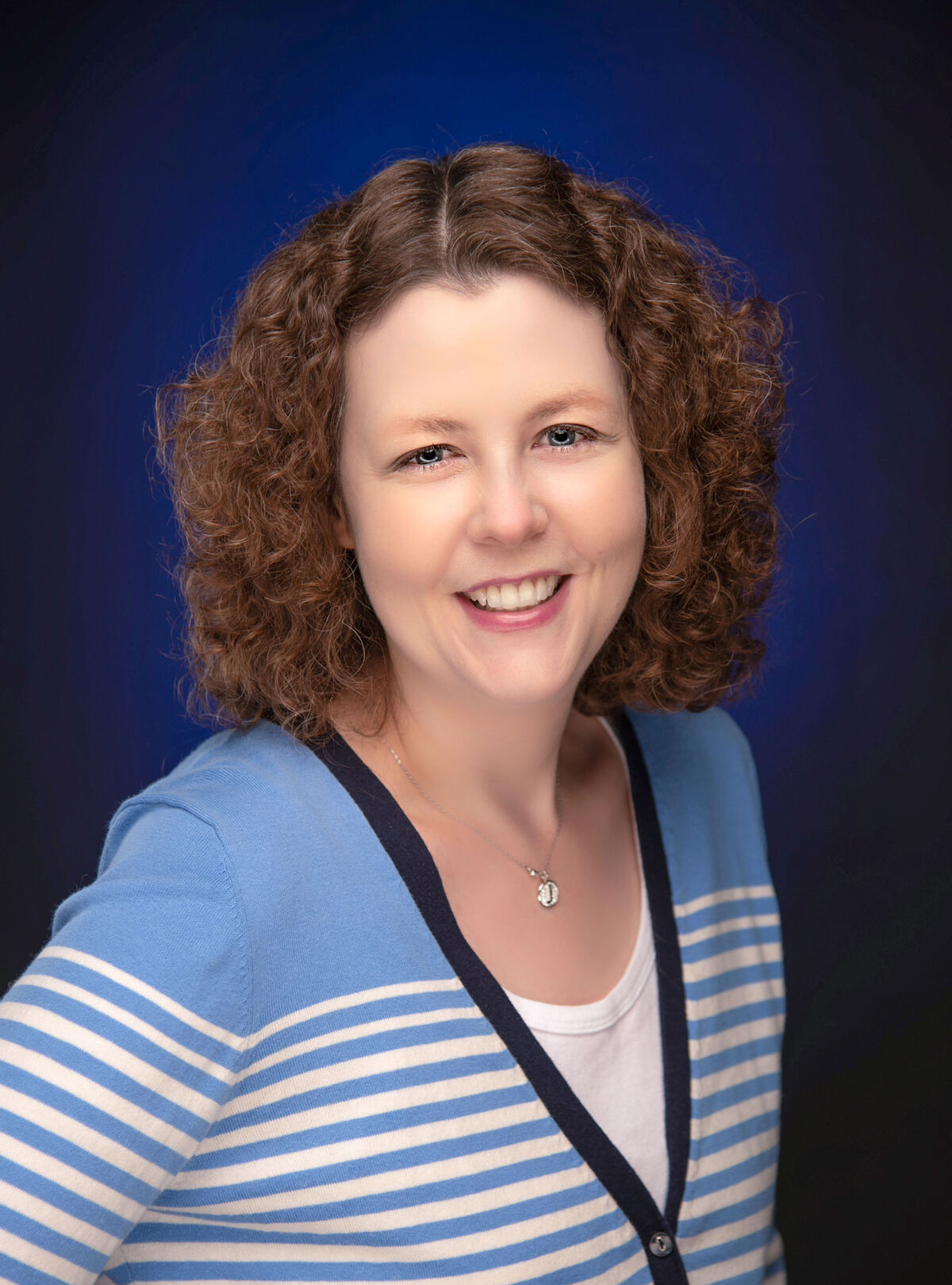 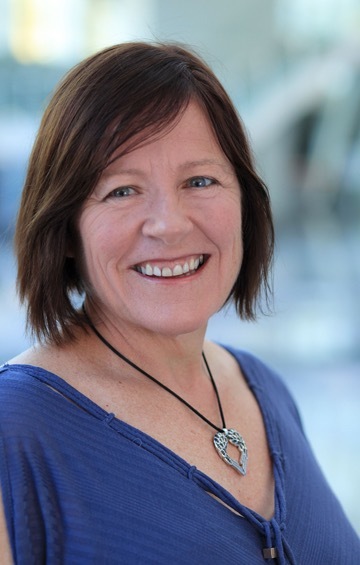 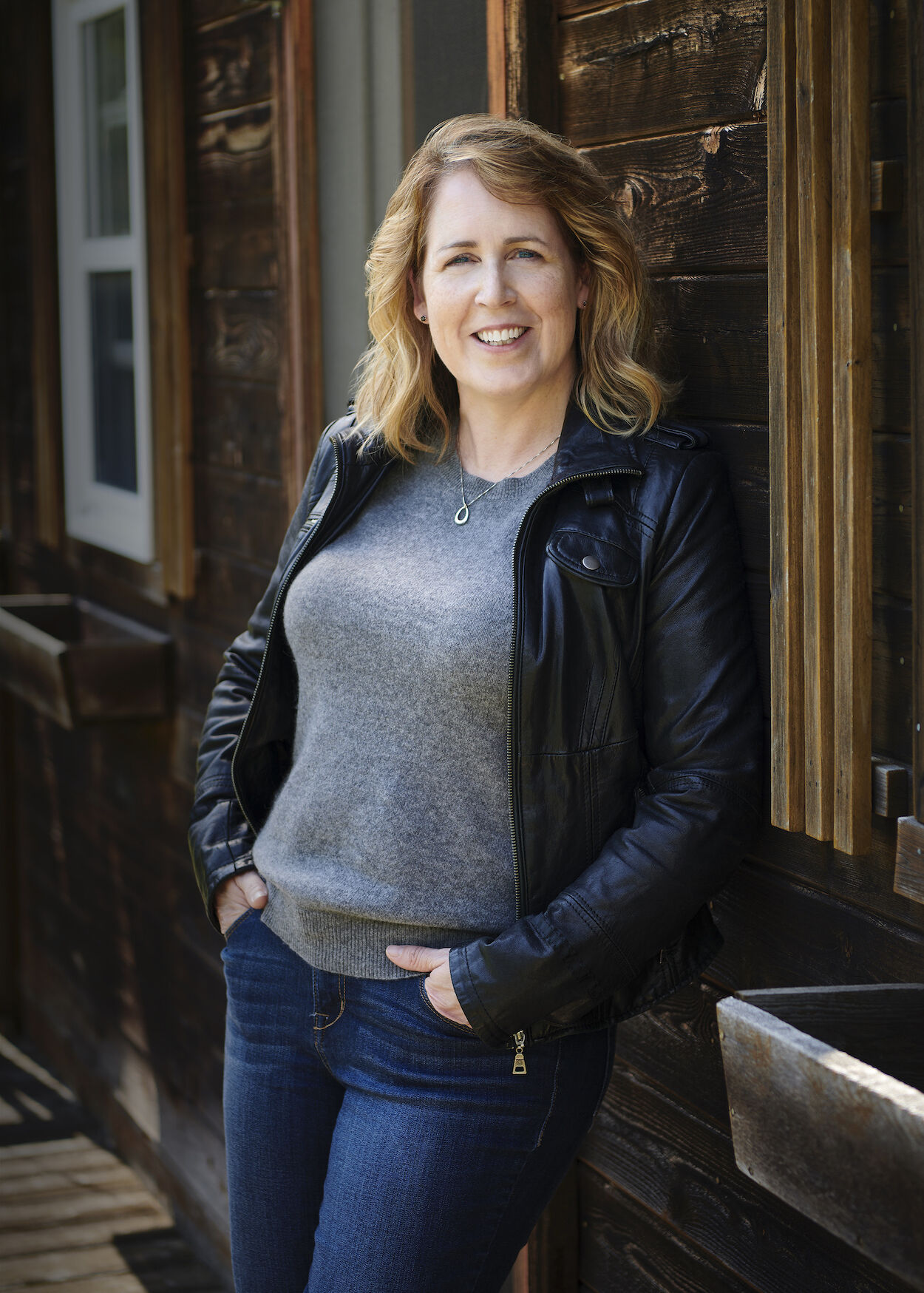 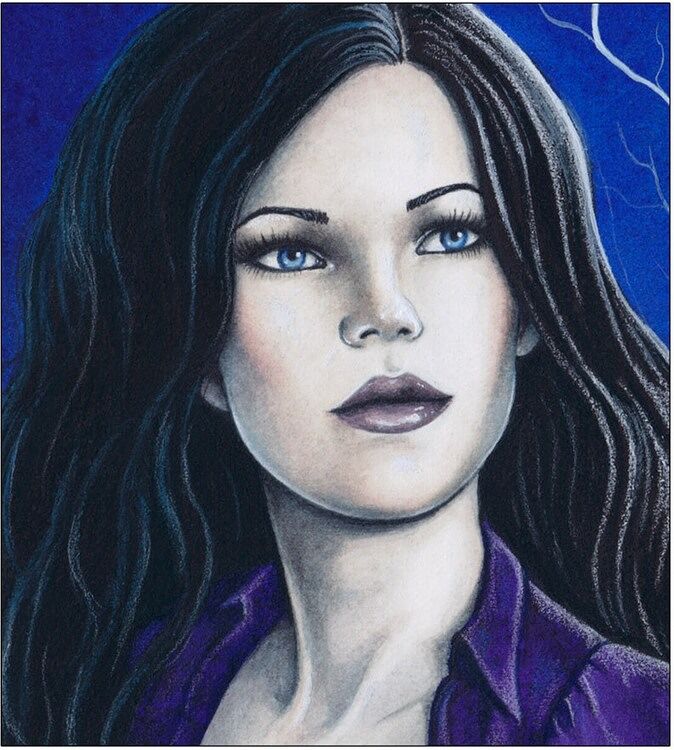 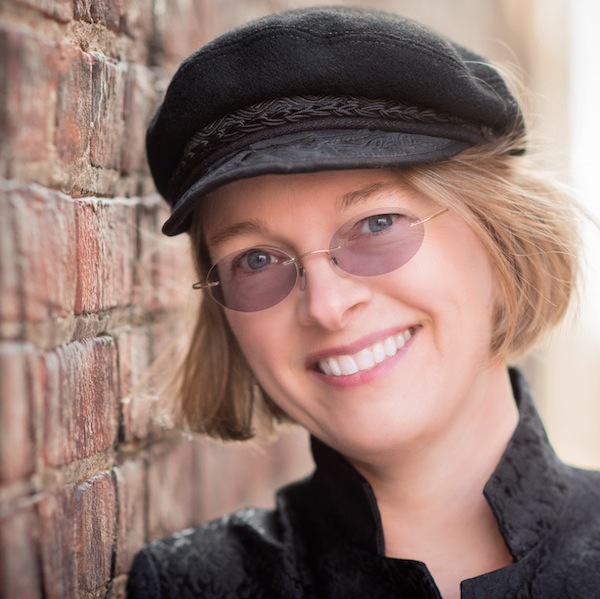 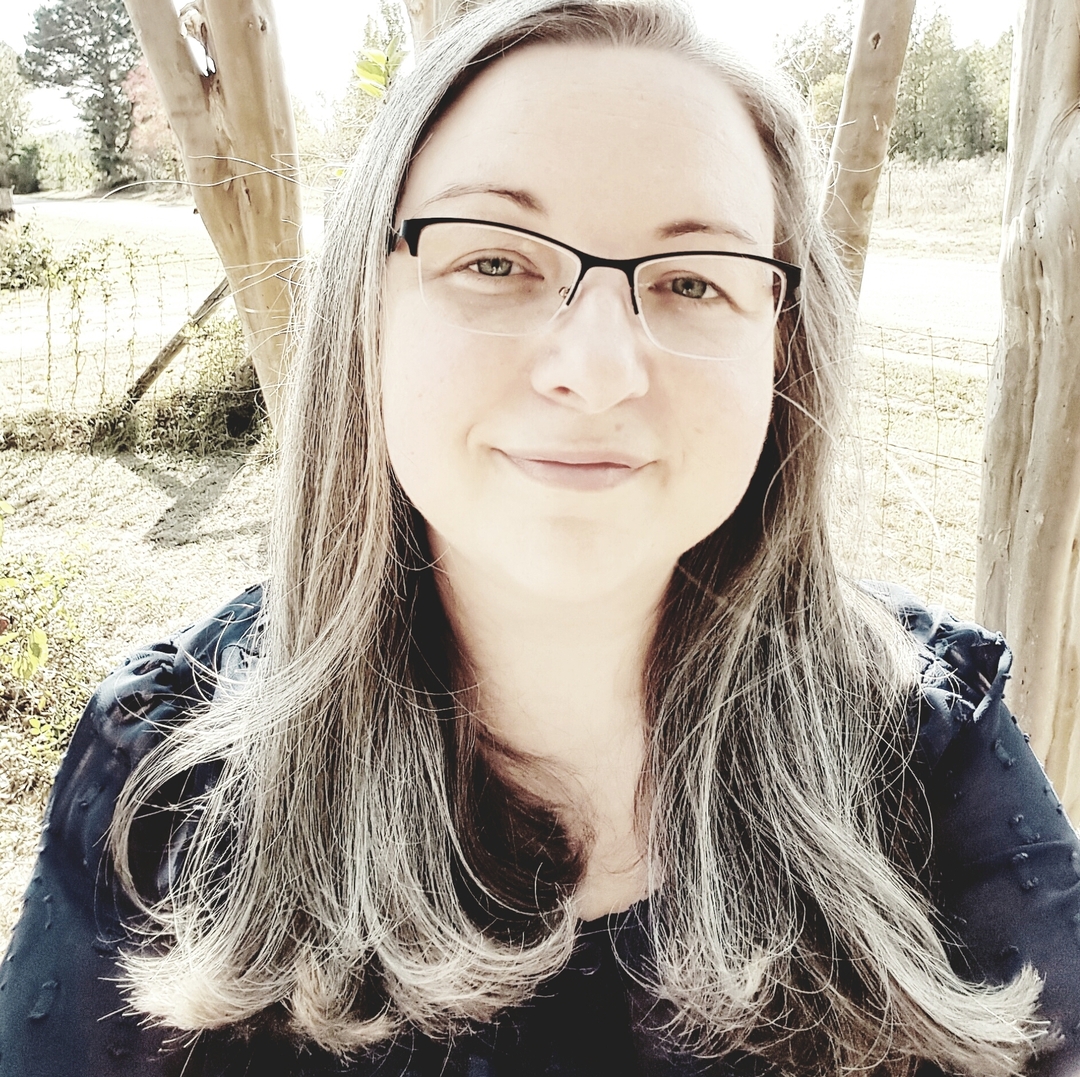 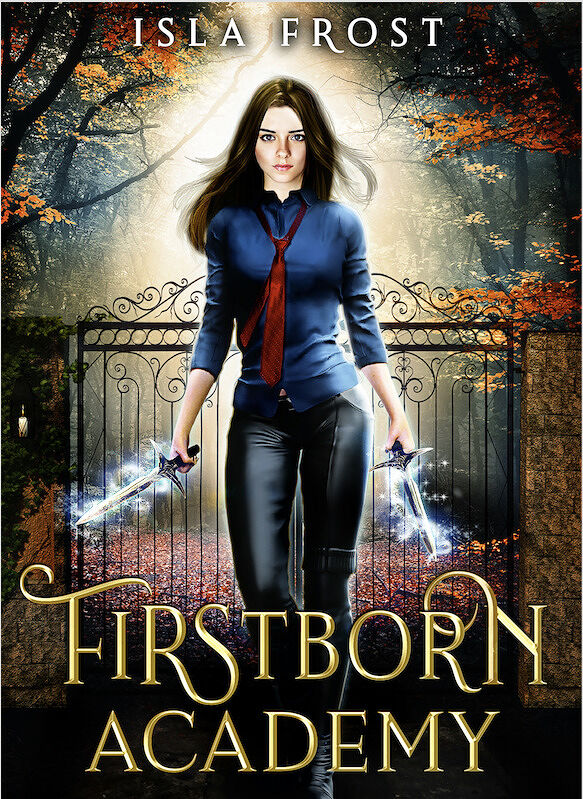 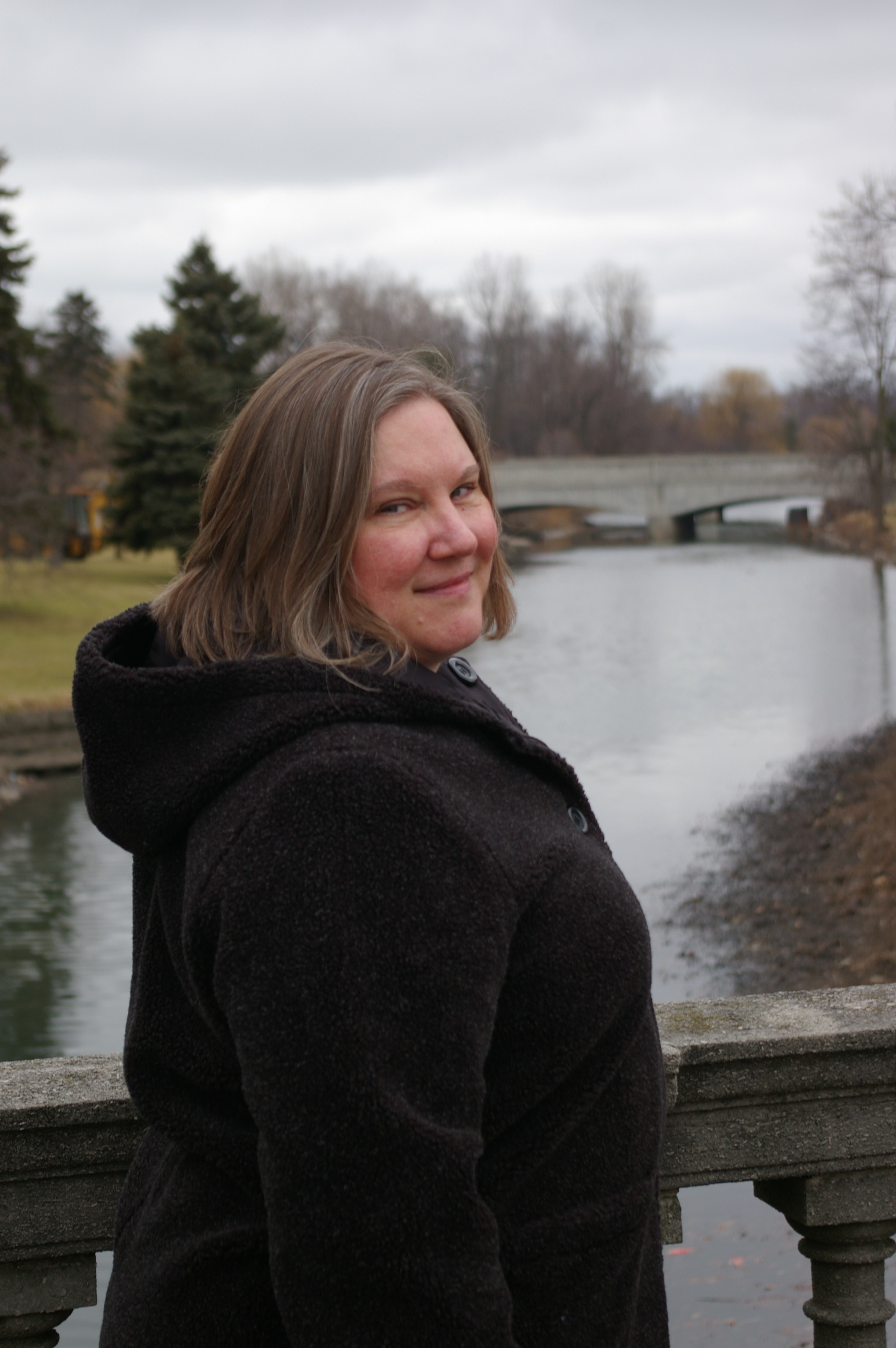 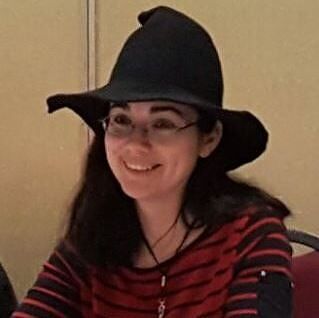 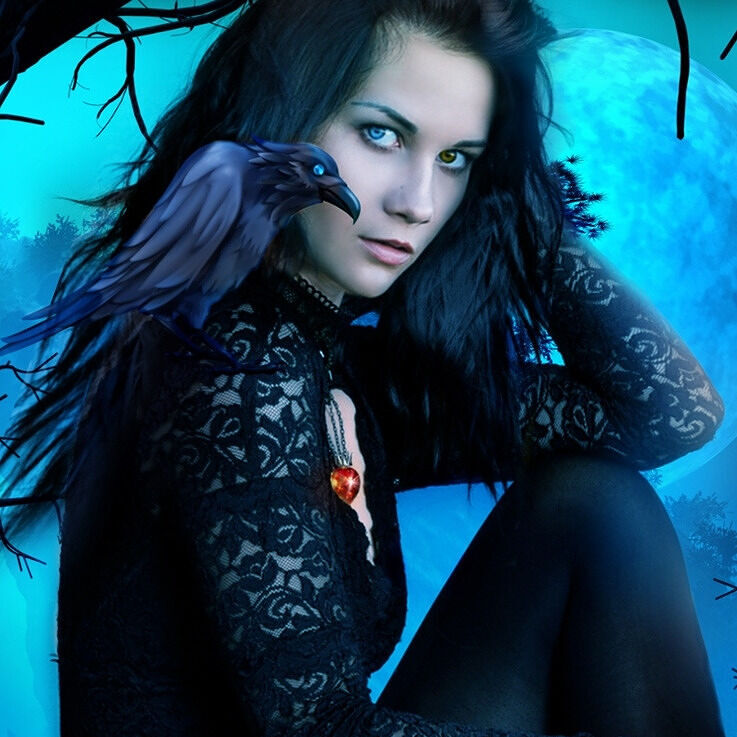 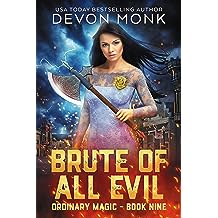 Brute of All Evil (Ordinary Magic Book 9) Jun 27, 2022
by Devon Monk
( 8 )
$5.99
In two weeks, Delaney Reed will marry the man of her dreams. Everything is perfect. So why are the gods following her around like she suddenly needs a bodyguard?

It might be because her fiancé is forced to serve an outsider god who hates Delaney and the town she protects. It might be because the local Valkyrie hired a social media star who is determined to expose Ordinary’s secrets. Or maybe it’s because the king of hell wants to take over the world and Ordinary is standing in his way.

Whichever disaster has the gods on edge, Delaney isn’t going to let anything get in the way of walking down that aisle. But when an attempted murder and kidnapping hit with a one-two punch, Delaney must take on the pain-in-the neck gods, the nosy streamer, and all the demons in the Underworld before her chance to say “I do” is lost forever.
Read more
Other Formats: Paperback 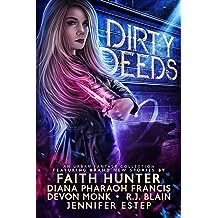 When the going gets tough, the tough get their hands dirty.

Join NY Times bestselling authors Faith Hunter and Jennifer Estep along with USA Today bestselling authors R.J. Blain, Diana Pharaoh Francis, and Devon Monk on a brand-new romp through magical worlds where the damsels bring the distress, what can go wrong will go wrong, and nothing is as it seems.

Adventure with Eli Younger, Liz Everhart, and Brute in the thrilling world of Jane Yellowrock. Face off against old gods and lost souls at a magical crossroads on Route 66. Become entangled in Ashland’s dark, deadly web with side characters from the Elemental Assassin series. Return to the irreverent world of Beck Wyatt, where disaster waits around every corner and cheesecake makes it all worthwhile. And finally, meet up with the Quinns and friends in the zany world of the Magical Romantic Comedy (with a body count) series.

In this collection of all-new urban fantasy and paranormal stories, the gloves are off and simply surviving might just be the dirtiest, most difficult deed of all. 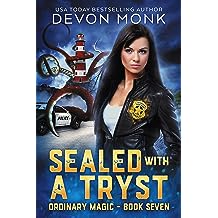 Sealed With a Tryst (Ordinary Magic Book 7) Aug 22, 2021
by Devon Monk
( 242 )
$4.99
**THIS NOVEL PREVIOUSLY APPEARED IN DIRTY DEEDS COLLECTION WHICH IS NO LONGER FOR SALE. If you bought Dirty Deeds, you may have read this novel.**

Delaney Reed needs a vacation from her vacation town. Even on a good day, it’s a lot of work to keep the peace in a town full of gods, monsters, and magical beings. Lately all the good days have gone from bad to worse. Luckily, Delaney has a plan to steal away with her fiancé, Ryder Bailey, for a nice relaxing weekend together.

Her getaway plans come to a screeching halt when Delaney discovers Crow’s garage sale is selling cursed magical items to anyone who wants one—and everyone wants one.

Delaney only has a few hours to hunt down the cursed objects before a massive winter storm barrels into town and her vacation escape becomes impossible. But Delaney isn’t going down that easily. Neither rain, curse, nor killer sea monster or love-sick Bigfoot will keep her from getting three blissful days alone with the man she loves—hopefully far, far away from Ordinary, Oregon.
Read more
Other Formats: Paperback 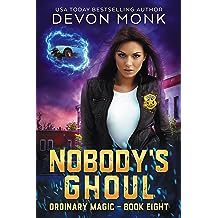 But trying to handle something so normal, so average, so very ordinary as planning her own wedding to the man she loves? Delaney is totally out of her depth.

When a car falls out of the sky and lands on the beach, Delaney is more than happy to push guest lists and venue dates out of her mind. The car appears empty, but someone has slipped into Ordinary with stolen weapons from the gods. Someone who has the ability to look like any god, monster, or human in town. Someone who might set off a supernatural disaster even Delaney can’t handle. 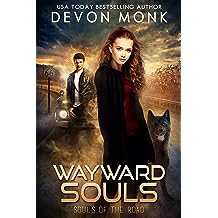 Lovers Lula and Brogan Gauge have dealt with magic, monsters, and gods for eighty years. Bound to travel the lonely roads of Route 66, Brogan’s a spirit with no chance of leaving the earthly realm while Lula, neither human nor monster, is only half-alive.

Their search for a way to break their curse might finally come to an end if the ghost in Illinois is telling the truth about a magical journal.

Lula and Brogan aren’t alone in wanting the journal. If they don’t get to it first, their chance at freedom might just turn into the fight of their un-lives... 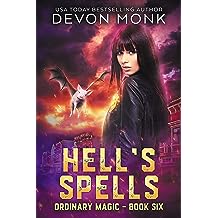 Hell's Spells (Ordinary Magic Book 6) Oct 9, 2020
by Devon Monk
( 924 )
$5.99
In a town like Ordinary, anything can happen. Unfortunately for Delaney Reed, it usually does... Police Chief Delaney Reed’s little beach town where gods vacation and monsters reside is finally back to normal. No possessed souls, no vortexes to hell, and absolutely no one’s turned into a frog lately. Then the queen of demons appears in her backseat begging to hide out in Ordinary, and Delaney knows her peace and quiet is over and out. Dealing with a demon fugitive isn’t the only thing on Delaney’s plate. She’s also trying to figure out why her boyfriend, Ryder Bailey, has been sneaking out of town every night and why her sisters are keeping secrets. But when the gods in town begin to act funny, Delaney knows something strange is going on. It might have something to do with two powerful magical items that suddenly go missing. Or it might have something to do with those little gaps of time Delaney’s been losing, and the memories she can’t quite recall…
Read more
Other Formats: Paperback 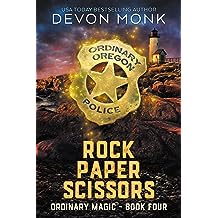 Rock Paper Scissors (Ordinary Magic Book 4) Apr 14, 2019
by Devon Monk
( 389 )
$5.99
The Reed sisters could have normal lives if the gods and demons and other supernaturals would mind their own business. But in a town like Ordinary, nothing is normal. Not even the holidays.

Jean Reed’s sudden curse of gnomes has her scrambling for answers, and the impending visit from Death isn’t helping. But when she discovers her boyfriend’s keeping a world-changing secret, Halloween’s treats are about to get much trickier.

Delaney Reed was not expecting the dragon to follow her home. Nor was she expecting her boyfriend to be stranded in a blizzard. What she was expecting was a holiday both merry and bright. And she’s not about to let a double-crossing demon take that away from her.

Myra Reed hates Valentine’s Day. Fortunately, she only has to deal with a stalker, a crossroads demon, and one slightly disastrous speed dating event before it’s over. Unfortunately, she might be falling in love with the demon who stole her sister’s soul. 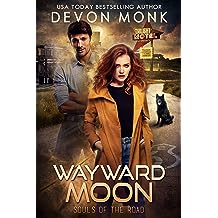 Lovers Brogan and Lula Gauge have traveled the haunted byways of Route 66 for almost a hundred years. Their deal with the god Cupid has brought Brogan back to life, but the return to the living world hasn’t been easy for him. What’s more, that deal left them deeply indebted to the god.

Now the god is demanding his due.

To honor their side of the deal, Brogan and Lula must find what Cupid wants found. The god hasn’t given them much to go on other than: find the rabbit that is not a rabbit. Do the right thing.

If the right thing involves facing down feuding werewolves, banishing vengeful ghosts, and venturing into the deep, ancient caverns beneath the Missouri hills, then Brogan and Lula might be on the right path.

But lurking deep within those caverns is an evil older than the gods. It is clever. It is waiting. It is hungry. 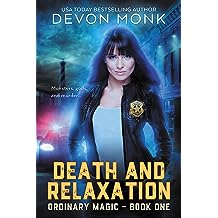 Police Chief Delaney Reed can handle the Valkyries, werewolves, gill-men and other paranormal creatures who call the small beach town of Ordinary, Oregon their home. It’s the vacationing gods who keep her up at night.

With the famous rhubarb festival right around the corner, small-town tensions, tempers, and godly tantrums are at an all-time high. The last thing Delaney needs is her ex-boyfriend reappearing just when she's finally caught the attention of Ryder Bailey, the one man she should never love.

No, scratch that. The actual last thing she needs is a dead body washing ashore, especially since the dead body is a god.

Catching a murderer, wrestling a god power, and re-scheduling the apocalypse? Just another day on the job in Ordinary. Falling in love with her childhood friend while trying to keep the secrets of her town secret? That’s gonna take some work. 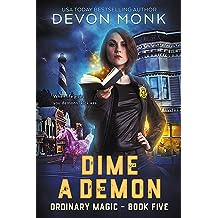 Dime a Demon (Ordinary Magic Book 5) May 31, 2019
by Devon Monk
( 492 )
$5.99
Myra Reed’s life is going great. Being a cop is great. Guarding the library of arcane secrets is great. Even dealing with the monsters and gods vacationing in the little beach town of Ordinary, Oregon is great.

Then the demon, Bathin, strolls into town and steals Myra’s sister’s soul.

So much for great.

Luckily, Myra has a plan to evict the demon and save her sister’s soul. Step one: shut down the portals to hell popping up in town. Step two: get rid of the pink know-it-all unicorn. Step three: don’t die while teaching Death how to be a cop.

Oh, and there’s a step four. Absolutely, positively, no matter what, do not fall in love with the handsome, charming, jerk of a demon she’s trying to kick out of town.

Logically, it’s a good plan. But when it comes to Bathin, Myra’s very illogical heart has some plans of its own. 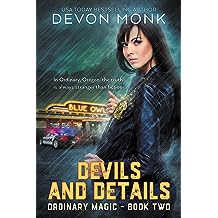 Police Chief Delaney Reed is good at keeping secrets for the beach town of Ordinary Oregon–just ask the vacationing gods or supernatural creatures who live there.

But with the first annual Cake and Skate fundraiser coming up, the only secret Delaney really wants to know is how to stop the unseasonable rain storms. When all the god powers are stolen, a vampire is murdered, and her childhood crush turns out to be keeping deadly secrets of his own, rainy days are the least of her worries.

Hunting a murderer, outsmarting a know-it-all god, and uncovering an ancient vampire’s terrifying past isn’t how she planned to spend her summer. But then again, neither is falling back in love with the one man she should never trust. 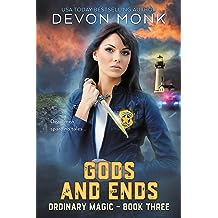 Keep your gods close and your monsters closer...

But some secrets run deeper than even she knows. To take down an ancient vampire hell-bent on revenge, she will have to make the hardest decision of her life: give up the book of dark magic that can destroy them all, or surrender her mortal soul.

As she weighs her options, Delaney discovers she can no longer tell the difference between allies keeping secrets and enemies telling the truth. Questioning loyalties and running out of time, Delaney must choose sides before a kidnapping turns into murder, before rival crochet and knit gangs start a war, and before the full moon rises to signal the beginning of Ordinary’s end.