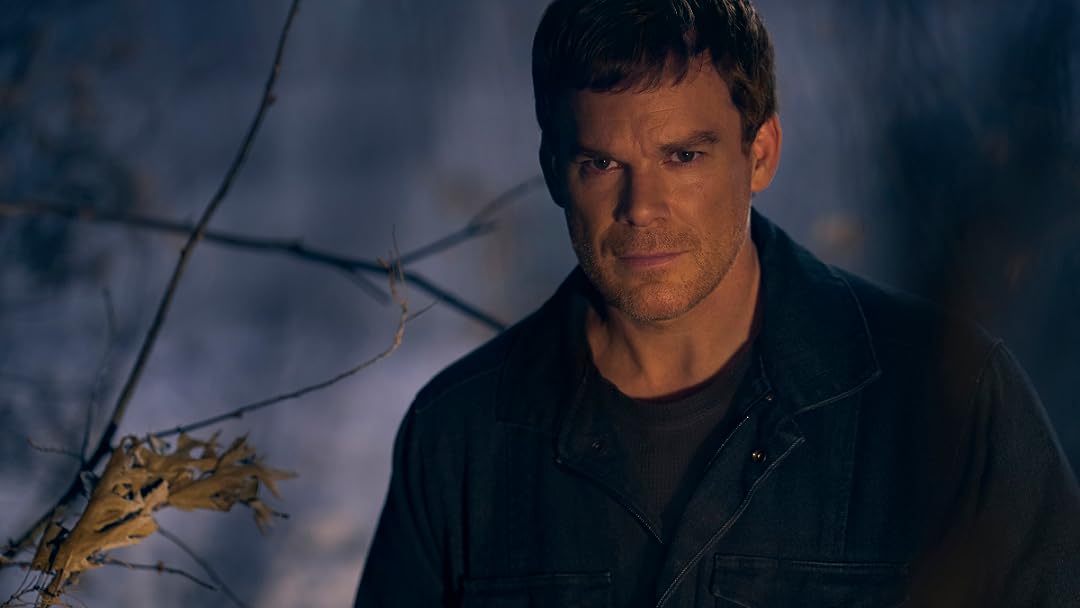 Robert MyersReviewed in the United States on November 7, 2021
1.0 out of 5 stars
Disappointing start
The first episode was extremely predictable and so far is setting out to be, once again, another Socialist propaganda piece churned out by the leftist media machine. From pandering to the gay community with the Token gay married character, to the evil spoiled rich kid and the not so subtle dig at the 2nd Amendment this sequel looks to be a treatise to Marxist ideologies. At least the first series attempted to present a modicum of scientific consistency and accuracy regarding sociopaths in the characters of Dexter and his victims. This sequel seems to have thrown that out with the main character's behavior regarding the white buck. Lets all forget he was going around as a kid butchering the neighborhood pets. Looks like the producers and writers of the show are out to portray Dexter as some sort of white Socialist knight. Weak writers, weak story equals major disappointment.
264 people found this helpful

New QuilterReviewed in the United States on December 1, 2021
5.0 out of 5 stars
This Isn't Leftist, Stop Speading CNN Fake News!
Most of the negative reviews I'm seeing are from people complaining about it being "woke" and it is not. It's a reflection of the times, there are going to be "woke" people in it like the podcaster but that doesn't mean there's an agenda. Gay people live in the world, people of color live in the world, disabled people live in the world and having them in the show doesn't mean there's an "agenda" to the show. I'm a conservative and had no issue with this show, with many I do and I'm vocal about it but you have to know the difference between a show that's current with society and one with a social agenda because it isn't the same thing.

I'm on episode 4 (today is Dec 1st 2021) and will update as more comes out but so far they're doing a fine job. All they have to do to not totally mess this up is avoid being predictable which would include Audrey getting kidnapped by the current seasons villain or Harrison killing Dexter.

_Fyre_Reviewed in the United States on November 8, 2021
1.0 out of 5 stars
Too Woke, Too Wimpy
Long time Dexter fan. But this first new episode was so obviously leftist it reduced the quality of story. Watching it was like running down a checklist of Hollywood’s new woke criteria: Token people of color—check. Gay male friend—check. Disabled coworker—check. Evil white male rich guy—check. Social justice protesters—check, and so on. But I could have gotten past that if the show’s writing was at all engaging, fresh, or interesting. It wasn’t. Worse, Dexter seems like a wuss now, not just out of practice.
207 people found this helpful

The ParatrooperReviewed in the United States on October 28, 2021
5.0 out of 5 stars
Guilty
I know WE are all involved, guilty of every murder. We didn't do the killing but we kept his secret and hoped
and prayed he'd get away scott free one more time when things got tight. Yep! I am going to be rooting for him, sending him good vibrations and support. Oh! It is good to have Our Dark Passenger riding next to Us once more. I know YOU are Guilty also but We Love it. Can't wait, Welcome Back Dexter, it's been to long. Come on in and tell us what's on your mind, we're here to help.
148 people found this helpful

JegerReviewed in the United States on November 7, 2021
1.0 out of 5 stars
Sad sequel
The first series was decent. The sequel like so many other sequels lacks any substantial hook of a plot or substantial intrigue. To boot, it apparently is more focused on promoting gay pride agenda. Sad the land of Hollywood that has long been the source of so many meaty articles in scandal magazines is now supposed to have become the compass for the American conscience. Not only is the sequel weak, the not so hidden agenda is pathetic.
197 people found this helpful

JBReviewed in the United States on November 8, 2021
1.0 out of 5 stars
Horrible Disappointment
I cannot begin to tell you how disappointing this revival already is, nor how convoluted the character of Dexter has remained. If you're like me and you found it fundamentally asinine that he left his son to a serial killer (ya know the one who tried to kill Deb before another one finally succeeded?) in an effort to keep his son safe from serial killers, hold onto something because he's apparently spent the last ten years getting dumber.
He now lives thousands of miles from his previous home in Miami, in a small town where he enjoys the company of his gay boss, a cop girlfriend (who looks a lot like Deb), and her daughter (who acts a lot like Astaire). It seems the need to avoid loved ones doesn't apply when it comes to Dexter's insatiable need for ... a girlfriend. Oh, and he goes by Jim now. He's no longer a killer and he just loves line dancing. Yeah.
Enter the villain. The worst person Dex--er, Jim--has encountered in the last ten years. The one who's going to bring him back into the fold and force him to pick up his cleaver once again. A spoiled rich kid who happens to kill Jim's favorite deer. That's right, a deer. But don't worry, this kid is really bad. A super high party boy told us so.
Remember the Dexter who vetted his victims so thoroughly, he required more evidence than the police in order to convict? And he had to prove their intent to kill again before they earned a place on his table? I remember a Dexter who had such a strong code, one couldn't help wondering if they were actually on the side of the bad guy at all--if the real bad guys were the ones in badges letting these monsters run free because of some arbitrary statute or law. We'd even find ourselves reading the news from time to time and wondering, "Man, where are the Dexters of the world?" It was a wild, morally ambiguous ride, and I'm sad to say it's over for good. Disembark, folks--nothing to see here.
161 people found this helpful

M. J. HarperReviewed in the United States on November 7, 2021
1.0 out of 5 stars
Updated! still pretty lame
My original 3 star review from episode 1 is below the dashed line, unedited. Here is my updated 1-star review after having watched up through episode 4.

Episode 4 is where they really reveal their Woke crap; a podcaster calls someone out for being a "rich, white, entitled, cis-gender guy" - which is an unbelievable character in the first place - you can certainly tell it was written by someone on the far Left of the political spectrum, which only exists in their minds; since they can't find someone in real life who behaves this way, they have to write one who does and project it onto everyone else as if it's reflective of reality.

They do have all their woke bases covered with representation (or over-representation, as it were), as other reviewers have stated; handicap, latinos, gays, black people, white people, etc. It's as if the Leftists don't understand micro-culture, or they think their personal bubble is universal. It's so strange.

I'm not gonna call the women out for crazy hair colors, that stuff is pretty common place now and the Poison Dart Frog theory is self-explanatory.

As far as my original concern with the same directors and writers go, that has been answered and it does show in the final result; they are different. So each episode is a mixed bag. Unfortunately, it just takes one bad apple to ruin the bunch, and episode 4 did it for me, though there are tells in all of them so far.

My subscription to Showtime remains canceled and will not auto-renew; this series of Dexter just isn't worth it.

The original was certainly better; this New Blood is fairly badly directed - bad camera angles - and the audio certainly isn't great, but it's only in a few spots where I noticed bad audio. Hopefully it's not the same director for all episodes. This first episode is not overtly woke, but the boxes are checked: gay guy, latinos, strong female character (sheriff - possibly Native American? Not sure). Straight white male is the bad guy and SUPER badly written - one of the most absurdly irresponsible people I've ever seen or heard about, which makes it really unbelievable.

There is a gun-buying process in the first episode, and kudos to the writer for not doing the busted "loophole" crap about buying a gun, unfortunately for the writer he goes an equally dumb route - the guy has to wait before the FBI approves the purchase, but he badgers Dexter into selling it to him anyway (Dexter doesn't do it), which makes his character even more unbelievable (I've never heard of anyone trying to circumvent the FBI in a gun store, lol).

As an aside, during one of Deb's appearances, she pulls the bullet that killed her out of her side - but she pulls the ENTIRE thing out - casing and all! Not simply the projectile. It was so insulting seeing that, as if the viewer is too stupid to know the difference.

As far as Dexter goes, the story is kind of off - he doesn't vet his first kill, he just does it because of something that he heard from someone who was on drugs at the time and could have just been making something up. The guy kills an albino deer that Dexter has grown fond of, and that's ultimately what sets him off.

Overall, I think the first episode has bad writing and bad directing; if they aren't using the same writers and directors for every episode, then there is certainly hope for this series, otherwise, I think it's safe to say it's dead in the water unless they clean up their act and do some research instead of just throwing their personal points of view into the story and messing it all up.
121 people found this helpful

bluetearReviewed in the United States on October 30, 2021
3.0 out of 5 stars
Are you kidding?!
I'll give it 3 stars for the 2 main actors still being in it - but this is a HUGE disappointment. The ending is as big a letdown as it gets. This could have gone far but the first mistake (and last) was bringing Harrison's character into the picture. What were they thinking?!
75 people found this helpful
See all reviews
Back to top
Get to Know Us
Make Money with Us
Amazon Payment Products
Let Us Help You
EnglishChoose a language for shopping. United StatesChoose a country/region for shopping.
© 1996-2022, Amazon.com, Inc. or its affiliates