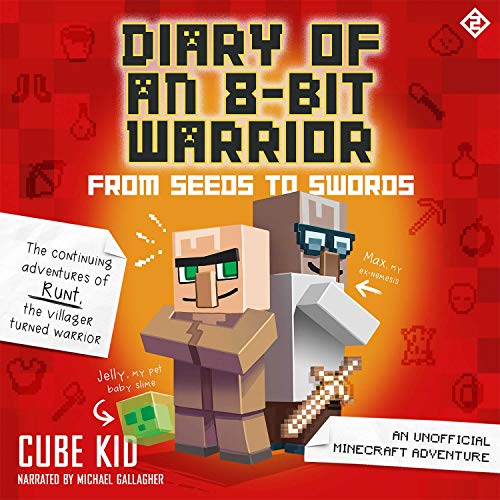 Book two of the international best-selling 8-Bit Warrior series that takes listeners inside the journal of Runt, a young Minecraft villager who dares to dream of becoming a Minecraft warrior!

These are the real books by Cube Kid! Diary of An 8-Bit Warrior: From Seeds to Swords ​was originally published as Wimpy Villager Kindles 5-8.

Pet slimes. A potion brew-off. A creepy forest that no one will explain. What’s a 12-year-old warrior-in-training to do?

As Runt and his friends continue their battle preparation, they face their biggest challenges yet - and it’s not just those zombies decked out in body armor (which is really weird, by the way). Runt’s got a brand new nemesis who will stop at nothing to claim the top spot in the warrior competition at school. And, to make matters worse, there’s a strange girl following him around wherever he goes. But old enemies will become new allies as the town rallies to save the school from a series of mysterious mob attacks. Can Runt and his friends take down the biggest, baddest boss mob yet?

The adventures continue in this second installment of the unofficial Minecraft diary series by Cube Kid.

Your audiobook is waiting!
Learn more about membership
List Price: $7.55
You Save: $0.94 (12%)
By completing your purchase, you agree to Audible’s Conditions Of Use
Sold and delivered by Audible, an Amazon company

Maureen Hopkins
5.0 out of 5 stars I love it
Reviewed in the United States 🇺🇸 on September 27, 2022
Verified Purchase
This book is full of action. I also love the characters. I also love the plot and the author doesn’t limit himself to what can be done in Minecraft.
Read more
Helpful
Report abuse

Keri
5.0 out of 5 stars Quality writing, and so much fun!
Reviewed in the United States 🇺🇸 on June 14, 2015
Verified Purchase
First of all, I am horrified at the reasons for the one star reviews. Isn't it possible to get reviews like that (by people who have not even read the book!) removed? I went and marked them all as inappropriate, because it is unfathomable to me that people decided not only was this book not worth $1, but CubeKid should be "punished" for his impetuous and irrational choice to not offer this book as KindleUnlimited. Bah!

I didn't come across book 8 when it was not a KindleUnlimited offering, but if I had, I would have happily paid $1 for it. Geez, one-star-review-people--this is quality writing and if he wants to actually charge money for it, is that a crime? CubeKid, I'm sure those reviews get under your skin. How utterly unappreciative of all your hard work! Don't let them. They are the minority, I'm sure. I'd like to think most of your readers don't throw hissy fits.

Okay, on to the actual book and the reason for my five star rating. CubeKid was witty, engaging in his writing and grammatically sound in book 8, which is always true, but it is especially impressive this round for cranking out such a fast story (and wow, it really was fast!). As always, my kids (Katie and Ben! ;)) loved it and I enjoyed reading it to them. Any publishing houses contact you yet? I mentioned my thoughts on this in my review on book six, and I still think that your overall story arc has excellent potential to be picked up and republished (depending on copyright infringement issues), or you might just be contacted to write something else. (Are you easy for them to contact?)

Good luck, CubeKid. Steady on, and no worries--you have a gift, and it will shine through and pay off in the end. The 4.5 stars on this book is a reflection on the reviewers rather than the book, which is so interesting and unusual. Who would think so many people would get SO irate about 99 cents?
Read more
17 people found this helpful
Helpful
Report abuse

Marcie J Timmerman
5.0 out of 5 stars Fun, Good lessons
Reviewed in the United States 🇺🇸 on April 10, 2022
Verified Purchase
This book engaged my 8 year old Minecraft junkie. He enjoyed the battles and we talked about the characters and the lessons less need by the main character throughout - which are clear but aren't hitting you over the head repeatedly.

This isn't fine literature, but it's a solid fanfic with excellent illustrations and a format that keeps it engaging.
Read more
Helpful
Report abuse

Elaine Poyerd
5.0 out of 5 stars Great book!
Reviewed in the United States 🇺🇸 on November 30, 2021
Verified Purchase
Beyond amazing according to my 8 year old son. He loved it and enjoyed reading on the Kindle app as opposed to hardcover book.
Read more
Helpful
Report abuse

Amazon Customer
5.0 out of 5 stars SO GOOD!!!
Reviewed in the United States 🇺🇸 on July 29, 2018
Verified Purchase
This book is AMAZING!! I'm being honest! I enjoyed reading this so much! A great second part to the "Diary of an 8-Bit Warrior" series, we are introduced to a couple new characters which improve the storyline even more! I would recommend this book/series to anyone and everyone who has the ability to read it. Cube Kid has sucessfully created not just a story, but a world where the readers can experience it as vividly as the characters do.
To Cube Kid,
Thank you for the effort that you put into this series! I bet that it can really become difficult to keep up with writing and well, life. But in writing, you really have hit gold with your ideas and storytelling! I know that i'm not exactly the first reader of this series, but I enjoy it all the same! I hope you have an awesome day!!
-Rain123
Read more
4 people found this helpful
Helpful
Report abuse

Amazon Customer
5.0 out of 5 stars Ur one of my favorite authors.
Reviewed in the United States 🇺🇸 on May 26, 2015
Verified Purchase
It is an interesting book, an awesome minecraft story. The books are very humorous, with just enough touch of humanity, I can't wait for the next book and hope it comes out soon. I have read this series over and over again and still love to read it, I just got the latest book last week and have read it twice. Ur one of my favorite authors cube kid, and if you keep coming out with more books you will stay and improve that rating on my brother's and my favorite authors. You are one of the best and I love your talent. And I'd like to say that you have inspired me in many other ways to do stuff in minecraft. All in all I love your imagination and your ability to put it into words.

james333
5.0 out of 5 stars A Very Enjoyable, Exciting Book📖👍.
Reviewed in the United Kingdom 🇬🇧 on October 17, 2022
Verified Purchase
Runt (the villager's name) is trying his best to become a warrior. However all of the kids want to become one so there is a great competition going on. I do think he will become a warrior, but also I think he has greater potential as he might defeat Herobrine.
My favourite part of the story was when the defeat the legendary boss 'Urk Doomwhip'. It was incredibly exciting.😃 I believe Runt will obtain a Diamond Sword and I think he will become great friends with Breeze. 💎🗡️

If you enjoy reading or playing Minecraft then this is a perfect fit for you. 😄

Corsaka
5.0 out of 5 stars Development of the Story
Reviewed in the United Kingdom 🇬🇧 on December 21, 2017
Verified Purchase
Brilliant follow-up to the previous four books, involving some surprising new friends and yet more enemies.

There's also a small bump in writing quality, coming from a far more experienced author. Good work on that.

Essentially a must-have if you enjoyed the first book.
Corsaka, out.
Read more
One person found this helpful
Report abuse

Emma
5.0 out of 5 stars Love at first sight
Reviewed in the United Kingdom 🇬🇧 on May 26, 2015
Verified Purchase
I have loved ALL of this series and I can't wait for the next one. They don't take long to read but they are full of exciting things and great ideas. Cube Kid please can you add someone to the story called Emma. If you did that it would make me soooooooooooo happy. Please carry on writing these awesome books :)
Read more
Report abuse

Emma
5.0 out of 5 stars One of my best series just got better
Reviewed in the United Kingdom 🇬🇧 on June 8, 2015
Verified Purchase
Love it once again. Even better than the others if that is possible. I really like the fact that you look at the reviews as most authors don't do that. Please please please can you put a girl called Emma in the book.
Thanks for another great book and can't wait for the next one!
Read more
Report abuse

Dickie Bird
5.0 out of 5 stars BRILLIANT
Reviewed in the United Kingdom 🇬🇧 on June 4, 2021
Verified Purchase
I love this book if you like minecraft this is the perfect book it shows what your life would be like if you are a villiger.