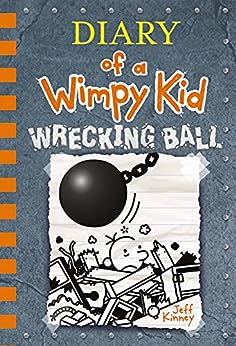 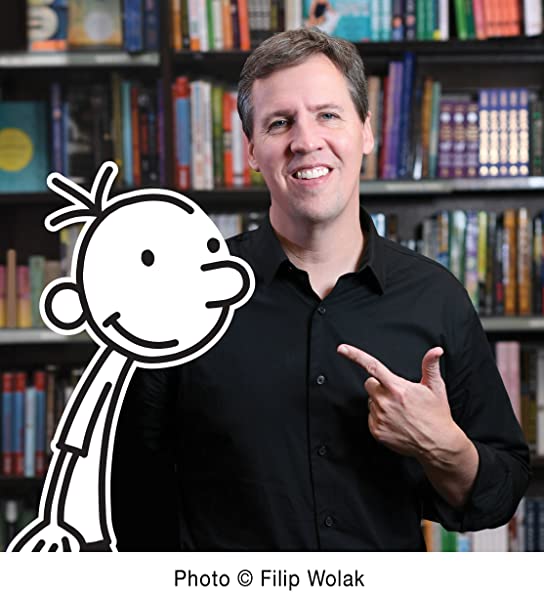 by Jeff Kinney (Author) Format: Kindle Edition
Book 14 of 17: Diary of a Wimpy Kid
Teachers' pick
See all formats and editions
Sorry, there was a problem loading this page. Try again.

In Wrecking Ball, Book 14 of the Diary of a Wimpy Kid series—from #1 international bestselling author Jeff Kinney—an unexpected inheritance gives Greg Heffley’s family a chance to make big changes to their house. But they soon find that home improvement isn’t all it’s cracked up to be.

Once the walls come down, all sorts of problems start to crop up. Rotten wood, toxic mold, unwelcome critters, and something even more sinister all make Greg and his family wonder if the renovations are worth the trouble. When the dust finally settles, will the Heffleys be able to stay . . . or will they need to get out of town?

Next 4 for you in this series See full series
Total Price: $31.04
Books In This Series (17 Books)
Complete Series
Diary of a Wimpy Kid
Kindle Edition
Page 1 of 1Start OverPage 1 of 1
Previous page
Next page

Jeff Kinney is a #1 New York Times bestselling author of the Diary of a Wimpy Kid series and the Awesome Friendly Kid series. He is a six-time Nickelodeon Kids’ Choice Award winner for Favorite Book and has been named one of Time magazine’s 100 Most Influential People in the World. He spent his childhood in the Washington, D.C., area and moved to New England, where he and his wife own a bookstore named An Unlikely Story. --This text refers to an alternate kindle_edition edition.

Jeff Kinney is a #1 New York Times bestselling author of the Diary of a Wimpy Kid and Diary of an Awesome Friendly Kid series. He is a six-time Nickelodeon Kids’ Choice Award winner for 'Favorite Book' and has been named one of Time’s 100 Most Influential People in the World. He is also the creator of Poptropica, which was named one of Time’s 50 Best Websites. He spent his childhood in the Washington, D.C., area and later moved to New England where he and his wife own a bookstore, 'An Unlikely Story'.

“Parents and educators applaud it as a visually friendly gateway for unwilling readers.”

“Kinney is right up there with J. K. Rowling as one of the bestselling children’s authors on the planet.”

“One of the most successful authors in the world.”

“In the publishing world, Kinney is a rock star.”

Visit wimpykid.com for all the latest Wimpy Kid news!

MzBKS
5.0 out of 5 stars Book review
Reviewed in the United States 🇺🇸 on May 14, 2022
Verified Purchase
I Loved The Excitement And All The Really Cool Details. So I Would Like To Read More. Have A Good Day
Read more
Helpful
Report abuse

Amanda B.
5.0 out of 5 stars My 8 year old son has devoured this entire series and keeps re-reading this one
Reviewed in the United States 🇺🇸 on July 8, 2020
Verified Purchase
This is a great series, my son started reading them when he was 7, and I couldn't keep up with how fast he read them, honestly. I had to purchase a few of them because the wait at the library was too long. He has re-read this one a couple of times. I've tried to find other similar series to get him into, but he would rather re-read these. We watched the first and second movie as well. The "hand written" journal style with lots of stick-drawn pictures helps carry these books through quickly. He reads them in a couple of days and is done. He will come and read an excerpt from the book he finds particularly funny and then go back to reading.
Read more
One person found this helpful
Helpful
Report abuse

Ruby L.
5.0 out of 5 stars please, a continuation
Reviewed in the United States 🇺🇸 on January 31, 2020
Verified Purchase
This book is definitely great and I have been waiting a long time to read it. Greg had a good attitude towards Rowley, which is kinda makes up for the bad attitude in Awesome Friendly Kid. It also is going back to its original humor, and has a crazy plot, which I enjoyed.
Okay, I know this is not a MC book, but I have some ideas
--------------------------------ideas--------------------------------
Can the next book be a continuation of this book?
Title: Diary of a wimpy kid: the fallout
Color: light gray and purple. Main color light grey, with sparks of purple.
Illustration on cover: Greg falling out a house.
Plot: Since the heffleys burned most of their inheritance, they must take some extra work to repair their house.

Okay, thats my idea and thoughts on this book.
Thank you!
Read more
One person found this helpful
Helpful
Report abuse

Cris D
4.0 out of 5 stars Wrecking Ball
Reviewed in the United States 🇺🇸 on June 5, 2021
Verified Purchase
When a relative passes away Greg’s family inherits some money. They decided (mom) to make the kitchen bigger but as usual nothing goes planned. I wonder if Wimpy Kid should be called The Boomerang Kid!
Read more
Helpful
Report abuse

Tabia21
5.0 out of 5 stars Just As Good As The Last
Reviewed in the United States 🇺🇸 on December 28, 2019
Verified Purchase
The book was brilliant! I loved "The Grout". Unfortunately, there was no appearance of the wrecking ball. I wish Greg's family HAD moved in the end so they could have started a fresh chapter. (I'm not talking about Diary of a Wimpy Kid: The Next Chapter!) I can't believe old Great Aunt Reba gave them the inheritance, she was an old grouch from what I can remember from one of the books. (Apparently she refused to take off her coat, "making us all feel guilty".) Such a great book!
Sorry for the short review, I'm off to get a manicure.
Read more
One person found this helpful
Helpful
Report abuse

Lord Nerfal
4.0 out of 5 stars :( :)
Reviewed in the United States 🇺🇸 on November 15, 2019
Verified Purchase
i didnt like this book becuase it was not the typical diary of a wimpy kid.
i finished this book in one day
so they try to move to manison but they dont even.....
you know what you read it and see if you like it

p.s. Jeff kinny if your reading this give greg something cool like he becomes famous and then becomes unfamous or add a new charcter.
Read more
2 people found this helpful
Helpful
Report abuse

Judy Herrmann
5.0 out of 5 stars perfect and funny
Reviewed in the United States 🇺🇸 on July 20, 2020
Verified Purchase
I love these books and it s so dumb how poeple will give one star because it came out of order or it got smashed. The book could not do anything about. would at lest look a the time it took to write. don t judge a book by it s form. I my case I the jokes,pictuces, and charaters themself sevles. I think the books are great.
Read more
One person found this helpful
Helpful
Report abuse

aggiebunny
4.0 out of 5 stars AMAZING
Reviewed in the United States 🇺🇸 on September 20, 2020
Verified Purchase
Needs. more. WORDS!!!!!!!
LOVED IT. The only problem is IT NEEDS MORE WORDS !
I think every wimpy kid book needs to be as fat as a dictionary I love them so much.
Read more
Helpful
Report abuse
See all reviews

the sacks family
5.0 out of 5 stars Great Book
Reviewed in Canada 🇨🇦 on May 7, 2021
Verified Purchase
This is the best book an earth! I love Jeff Kinney's books and I will never stop reading them! I highly recommend this book for all ages!
Read more
Report abuse

nothing
5.0 out of 5 stars GRET
Reviewed in Canada 🇨🇦 on November 13, 2019
Verified Purchase
I loved this book because ot ws about thou shalt and i loved tbe awesome book sorrey for spelling mystakes sinyce im chinease.
Read more
Report abuse

Kindle Customer
5.0 out of 5 stars I love it😍
Reviewed in Canada 🇨🇦 on May 20, 2020
Verified Purchase
it was funny
it was funny
i loved all of it
this book is for grade two three and four
Read more
Report abuse

Amazon Customer
5.0 out of 5 stars Amazing book full of excitement definitely recommend this book .
Reviewed in Canada 🇨🇦 on May 13, 2020
Verified Purchase
Full of creative adventure definitely rate 5 star I really enjoyed reading this book .Great illustrations and creative content .
Read more
Report abuse
See all reviews
Report an issue
Does this item contain inappropriate content?
Report
Do you believe that this item violates a copyright?
Report
Does this item contain quality or formatting issues?
Report