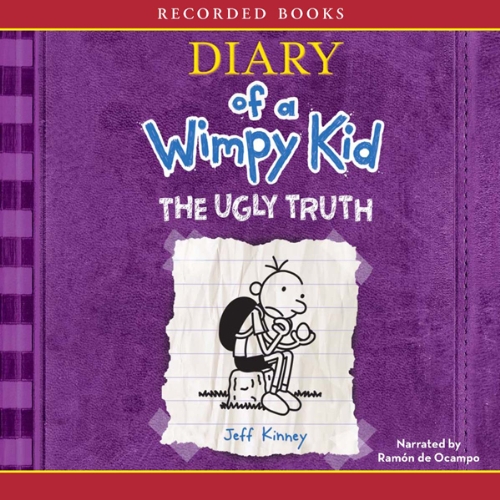 Diary of a Wimpy Kid: The Ugly Truth

List Price: $10.49
You Save: $0.54 (5%)
By completing your purchase, you agree to Audible’s Conditions Of Use
Sold and delivered by Audible, an Amazon company
Share

4.8 out of 5 stars
4.8 out of 5
7,818 global ratings
How are ratings calculated?
To calculate the overall star rating and percentage breakdown by star, we don’t use a simple average. Instead, our system considers things like how recent a review is and if the reviewer bought the item on Amazon. It also analyzes reviews to verify trustworthiness.

Product reviews
VINE VOICE
5.0 out of 5 stars Growing up
Reviewed in the United States on February 20, 2019
Verified Purchase
Im 18 but i love reading diary of a wimpy kid ever since the first book came out when i was 9. This book is so entertaining because it talks about the struggles of having to grow up and going through changes in which we have to learn responsibility and independence. I wished i had read this book when i was younger because i already went through all that. I dont think there is an age limit to this book though anyone can read it and enjoy it just as much :)
Read more

5.0 out of 5 stars Growing up
By Product reviews on February 20, 2019
Im 18 but i love reading diary of a wimpy kid ever since the first book came out when i was 9. This book is so entertaining because it talks about the struggles of having to grow up and going through changes in which we have to learn responsibility and independence. I wished i had read this book when i was younger because i already went through all that. I dont think there is an age limit to this book though anyone can read it and enjoy it just as much :)
Images in this review

DisneyDenizenTop Contributor: Harry Potter
HALL OF FAMETOP 100 REVIEWERVINE VOICE
5.0 out of 5 stars Perfect for Reluctant Readers and Children of All Ages
Reviewed in the United States on January 6, 2019
Verified Purchase
In 2007, the first volume in a series of children’s books was published. It exploded onto the elementary school scene and got America’s school children reading again. As new books appeared in subsequent years, children snapped them up and devoured them. To them, it was the literary event of the year.

No, this book series was not Harry Potter (published 1997-2007). This new series followed the misadventures of lazy unprincipled undisciplined middle school miscreant Greg Heffley. And school children everywhere ate them up. While the buzz over these books eventually died down, they are every bit as good as when they were first released, and each new addition to the series remains hilarious. If your child is a reluctant reader and/or 8 - 10 years old, definitely get him or her started on the first book! (While the protagonist is a boy, my children are both girls. In my experience with my own and other children, both genders love these books.)

As the title “Diary of a Wimpy Kid” implies, the books are written from Greg’s point of view. Hand drawn pictures abound on every page. The text is so clever that children, adolescents, and adults can all appreciate it. When a new book is released, there is a gentle fight at our house over who gets to read it first. There is one illustration in the first book that was so hilarious that I laughed till I cried. (I won’t spoil it for you with details.) My younger daughter still talks about how Greg’s idiot older brother misspelled the family dog’s name on his personalized dog dish: Sweaty.

Just like with Harry Potter, I recommend that you read the books in order, although each book can certainly stand alone. As I write in early 2019, here are the books currently in the series:

Now if you’ll excuse me, I’m off to reread the books. I can always use a good laugh!

Sam
5.0 out of 5 stars A great read. It's well written and I plowed through ...
Reviewed in the United States on July 31, 2016
Verified Purchase
A great read. It's well written and I plowed through it in one sitting. I could not put it down. I laughed, I cried, I smiled, and I pondered throughout the entire book. You know you just finished reading something great when you get towards the end and you start to panic because you don't want it to end. I thought all the characters were well flushed out and added something interesting to the story. I don't know how I can write a review without giving away the plot, so all I can say you need to read this. You won't regret it.
Read more
9 people found this helpful
Helpful
Report abuse

Melissa
4.0 out of 5 stars that absolutely love these books
Reviewed in the United States on May 20, 2016
Verified Purchase
First I'll say that I've known several children, including my oldest, that absolutely love these books. If you've got a boy who doesn't like reading (my nephew hated it until these), give them these and proudly watch them become little bookworms. With that said, I don't believe these are great for getting children interested in longer novels without a lot of pictures. The text is very large and so are the illustrations, so while this looks like a longer book, the content could fit in a much smaller one. My nephew read these and was when he finished them his love of reading went right down the tubes. My 9 year old loves reading and after this series he went right ahead and started Harry Potter; so in our own personal experience these were great for introducing him to longer series (he's already on HP book 3, YAY!) Rick Riordan is next :)
Read more
5 people found this helpful
Helpful
Report abuse

krishunee
5.0 out of 5 stars Good series to read!
Reviewed in the United States on September 7, 2016
Verified Purchase
My son and I are big Wimpy Kid fans. He is 7 and got his first 4 "wimpy kid" book through a friend. I now have bought 4 other "wimpy kids", (hardcover), my son had one paperback( that was a no,no). Any who These books have been our bed time reading for the past 6 months. I enjoy reading it to him, sometimes finishing a book in 3 days. I has also helped him to be an excelerated reader because of the pictures, plot(typical silly boy stuff), he enjoys reading them during his free reading time. I think he has reread some, he also got a hold to my phone to order another wimpy kid book.
Read more
8 people found this helpful
Helpful
Report abuse
See all reviews

Jules
4.0 out of 5 stars Brilliant but..
Reviewed in the United Kingdom on October 10, 2020
Verified Purchase
I enjoy reading the diary of a wimpy kid series, Manny made me laugh quite alot! But, this is the only thing that sort of, Weirds me out. Greg is a funny kid and all, and if there was anything i'd change about him is his weird girl obsession. I'm a girl and if Greg were a real person, he'd annoy me with his "Girl Obsession". Knocking off a star for that sorry. Now let's talk about things that are iconic and nice in this book. Rodrick: Owns a band Löded diper, Really bad at spelling, A bad boy? Manny heffley: Funny, A three year old boy, Possesses a blanket named tingy. Greg Heffley: Addicted to video games, 11 years old (I think) Anyway, thanks for reading my review, by Evie Kennedy 9 years old
Read more
Report abuse

B. A. Taylor
5.0 out of 5 stars Happy with purchase
Reviewed in the United Kingdom on July 19, 2020
Verified Purchase
Bought as a lockdown gift, for my grandson, who loves This author, He now reads them to me over FaceTime, as part of his schoolwork
Read more
2 people found this helpful
Report abuse

J Bee
5.0 out of 5 stars Funny and engaging
Reviewed in the United Kingdom on January 29, 2020
Verified Purchase
My son has recently discovered the diary of a wimpy kid books and is absolutely loving them, he's devoured one after another over the course of a few weeks.
The book is funny and engaging and leaves him laughing out loud. He can't wait to read the next one!
Read more
Report abuse

Hannah F.
5.0 out of 5 stars Hillarious, great read. My 8 yr old LOVES it!
Reviewed in the United Kingdom on November 16, 2015
Verified Purchase
So funny.........my son absolutely loves this book, he has read it a few times now, but will still pick it up and read again. He sits there laughing out loud and says that 'Diary of a Wimpy Kid are the best books out'. It was a great buy, my sons 8, so I think its around age 7-10. To be honest, you could say a lot higher than 10 years, theres plenty of parts that make me laugh too. Fantastic pictures which really set the scene. Great book.
Read more
Report abuse

Amazon Customer
5.0 out of 5 stars As expected
Reviewed in the United Kingdom on May 24, 2020
Verified Purchase
The Ugly truth
Diary of a wimpy kid
Greg-tastic! Same as ever with a few twists in the story but as expected it made me laugh! Purchased on kindle
Read more
One person found this helpful
Report abuse
See all reviews
Back to top
Get to Know Us
Make Money with Us
Amazon Payment Products
Let Us Help You
EnglishChoose a language for shopping. United StatesChoose a country/region for shopping.
© 1996-2021, Amazon.com, Inc. or its affiliates