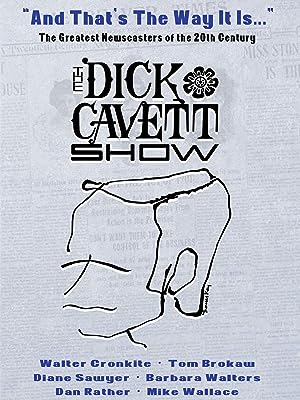 The Dick Cavett Show: And That's The Way It Is

(12)
8.42 h 27 min201916+
Since 1968, Dick Cavett has been host of his own talk show, in a variety of formats and on a number of television and radio formats. These releases were taken from episodes that aired between 1968 through 1996 and feature some of the best known news reporters of the era including Walter Cronkite, Mike Wallace.

Steve RammReviewed in the United States on December 18, 2018
5.0 out of 5 stars
The icons of Network News BEFORE Cable TV – Fascinating! 5 hours on 2 DVDs
First off, I have to say that I LOVE Dick Cavett. The guy is brilliant and very clever linguist. He was on ABC late light for years and then he went to PBS. (His 90 minute interviews with Hitchcock, Brando and Orson Welles are legendary. There have been other collections of his interviews with actors and musicians but – thanks to both Cavett himself (he saved all his shows on vide!) and S’more Entertainment – now we have legendary newscasters. This 2-DVD set has almost 5 hours worth of (mostly) interesting conversation. They come from the ABC series, the PBS series and the most recent is from 1991 (Dan Rather from the CNBC series (I had no cable then so never saw any of those).

In in some cases - like Rather or Walter Cronkite –there was just one guest. In others we get to see the news people along with others. A 1970 section with Mike Wallace also includes then FCC Chairman Nicolas Johnson plus Robert Klein and Joan Ganz Cooney (creator of Sesame Street). We do not see whole show but just when Wallace arrives.
There are two Cronkite sections (1974 and 1982) - one in Cavett’s studio and another where Cavett goes to Cronkite’s New England summer home.

The earliest one – from 1970 – features a YOUNG Barbara Walters, Actors Melvyn Douglas and Gig Young, plus ABC newscaster Frank Reynolds (who comes across as somewhat uncomfortable being interviewed).

In hindsight there are some odd occurrences. A 1985 show features Morley Safer, Diane Sawyer and Don Hewitt from “60 minutes”. There is “humorous” discussion of Hewitt’s eyes for “ladies” which we now know was sexual assault .
And, I think the same episode has Cavett (surprisingly) making fun of a Japanese couple in the audience. Never thought that Cavett had those prejudices. It's uncomfortable at best.

The DVD excises the TV commercials EXCEPT for the 1970 one where Cavett goes for a "commercial" there are TWO of them - both for fundraising causes.

Well I don’t want to give away much more except to say that if you loved Cavett and want to watch a time capsule of (then) current events, I think you’ll enjoy this. I heard that S’more has two more compilations of Cavett shows coming in January and I – for one – am looking forward to them.

17 people found this helpful
See all reviews
Back to top
Get to Know Us
Make Money with Us
Amazon Payment Products
Let Us Help You
EnglishChoose a language for shopping. United StatesChoose a country/region for shopping.
© 1996-2021, Amazon.com, Inc. or its affiliates