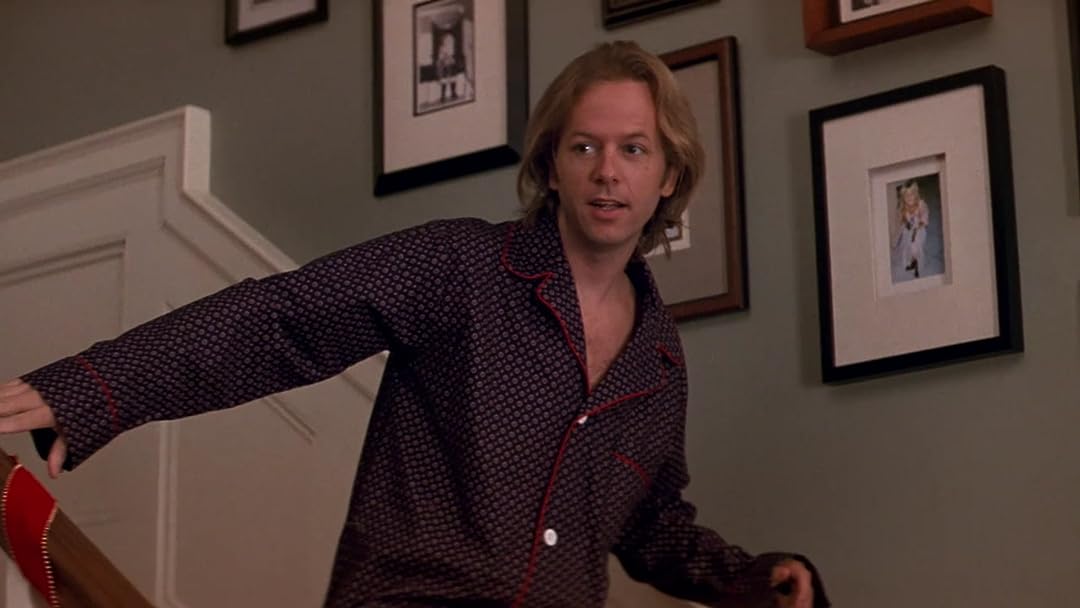 Watch with STARZ
Start your 7-day free trial
Add to
Watchlist
Redeem a gift card or promotion code
By ordering or viewing, you agree to our Terms. Sold by Amazon.com Services LLC.
Write review

annieReviewed in the United States on October 4, 2016
5.0 out of 5 stars
so funny!!!!
Verified purchase
i got this movie for my birthday and watched it tonight it was hilarious its about former childsar dickie roberts (david spade) he wants to reach high fame again as he did as a child but he's washed up and isint real enough when he additions for a part in a rob renermovie but rob says he isint a real human he never got to live a real childhood so he hires a family to take him on to live his childhood now. He joins a family with a mother grace, 2 kids sam and sally and a father who pays little attention to his kids and only hires dickie for his pleasure to be in a commercial. The kids call him stranger danger but they grow to really like him. He does some crazy things dye his nautrally blonde hair brown, make himself a water bed, ride in a baby stroler and offer the kids beer but it pays off the family puts on a fake christmas for him so he can pretend to get a bike he gets to be in the film. But also he falls in love with grace cuz her husbend ran off with dickie's ex girlfriend. When grace has no money at christmas for gifts there dickie is and he bought a lot of gifts. A really good movie and dont shut it off to fast before the credits cuz former childstars sing durring the credits. One of the funniest movies ever seen!
One person found this helpful

Matt and JessiReviewed in the United States on July 26, 2006
4.0 out of 5 stars
This is Nuckin' Futs!
Verified purchase
Being such a fan of films made by Saturday Night Live performers of Spade's era, it's amazing that I'd never actually seen this movie. I was told that it wasn't that good and that it wasn't Spade's best work - not measuring up to Tommy Boy, etc... I will admit that Tommy Boy was more memorable, but Dickie Roberts was quite a bit better than I was expecting it to be. I wish I had seen it sooner.

David Spade is the perfect actor to play this role of a washed-up former child star on the skids. He believes that he's still part of the "in crowd", but he always finds himself on the outside. The side of Spade displaying his quick-witted insults and harsh nature serve him well in this part and he does an excellent job with it.

The storyline is rather ridiculous, as is the case with most movies of this genre, from the SNL crew, but again, it hardly seems to make a difference. The movie is entertaining and lighthearted - not meant to be taken too seriously. I thought it was hilarious. There are some great one-liners, which Spade seems to have built his fame upon.

The supporting actors are also cast perfectly. Highly recommended for fans of this brand of comedy.

Morgan MorelliReviewed in the United States on July 2, 2022
5.0 out of 5 stars
Insane in the Membrane
Verified purchase
OMG I was obsessed with this movie as a kid when it came out. I have been saying "this is nucking futs" and "insane in the membrane, insane got no brain" my whole life because of it. I was so excited to see that it's on Prime. Such an amazing, nostalgic watch!

SamanthaReviewed in the United States on December 8, 2020
5.0 out of 5 stars
Dickie Roberts: Former Child Star
Verified purchase
I have always loved this movie and wanted to show it to a friend who hadn't seen it before. Found it on amazon prime and watched it immediately. David Spade in his glory days. Not too raunchy of a movie like some comedies are nowadays. Loved it!

YolandaReviewed in the United States on March 20, 2020
4.0 out of 5 stars
Funny for people with an odd sense of humor.
Verified purchase
Would recommend if you like oddly, funny movies. I watched with my preteen and she thought parts were funny.
Person grew up without an actual childhood, so he had to learn childhood lessons and experiences as an adult.

NoeReviewed in the United States on December 21, 2013
5.0 out of 5 stars
This is Nukin Futts
Verified purchase
I had to use that for the title. OMG I saw this the first time I beyond loved it! I had to buy it. It is such a nice come back for all the child actors that are left out there. It is a very sweet and touching story. The ending of the movie is a must watch. A lesson he learns can apply to all. The extra video song with the former child actors is hilarious! I am not much of a David Spade fan, but he blows me away with his Dickie character. Really Really Worth Watching
2 people found this helpful

GeorgeReviewed in the United States on October 27, 2020
5.0 out of 5 stars
David Spade's 2nd best movie ever.
Verified purchase
Although nothing will ever be as good as Joe Dirt, this is possibly my favorite non-animated family movie of all time.

So WickesitedReviewed in the United States on December 3, 2010
5.0 out of 5 stars
I don't know why I love this movie so much but it is Hilarious!
Verified purchase
There's something about David Spade's quirky personality that makes me laugh the entire movie. My wife laughs more at me than at the movie because of how ridiculous I act during this movie, but I like to pull it out a few times a year for a good laugh.

VOTE: If you find this review helpful, please vote yes! I like to review and your votes help me know how I'm doing.
4 people found this helpful
See all reviews
Back to top
Get to Know Us
Make Money with Us
Amazon Payment Products
Let Us Help You
EnglishChoose a language for shopping. United StatesChoose a country/region for shopping.
© 1996-2022, Amazon.com, Inc. or its affiliates