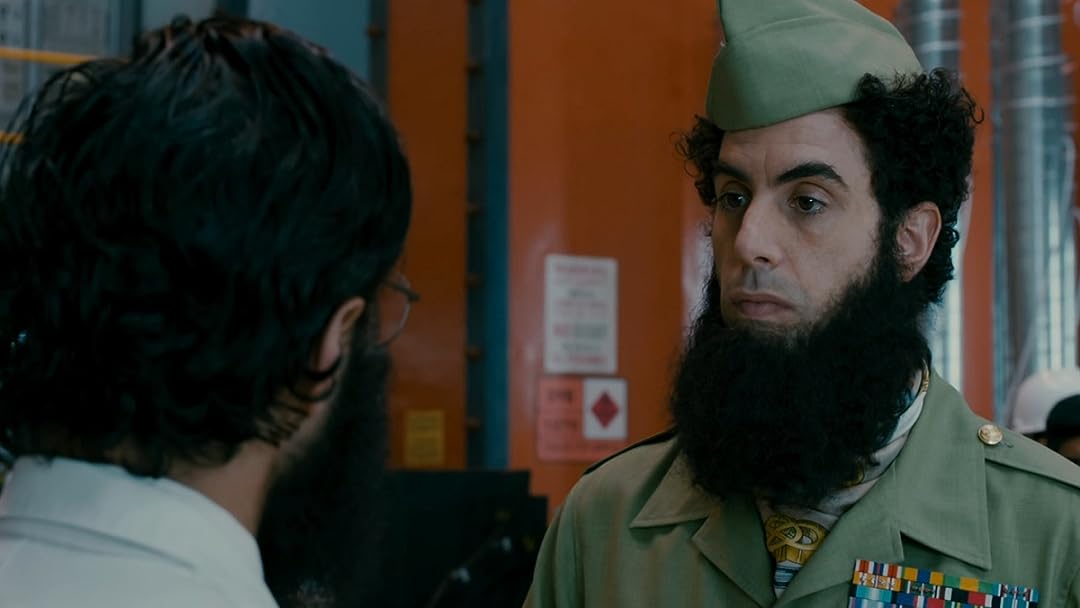 joel wingReviewed in the United States on February 16, 2020
4.0 out of 5 stars
Always pushing the border of good taste but pulls it off to hilarious effect
Verified purchase
The Dictator was one of Sacha Baron Cohen’s funniest movies. He plays the fictional Arab dictator Admiral General Haffaz Aladeen of the country of Wadiya in North Africa. He is an idiot but a very dangerous one. For instance, he takes advice from cartoons on his nuclear weapons and holds his own Olympic games where he shoots his competitors and the referees to make sure he wins.

The movie is constantly pushing the boundaries of the ridiculous and good taste. For instance, when Aladeen arrives in New York he has a parade riding a camel while a fake Arab version of Dr. Dre’s The Next Episode plays. He’s then introduced to his American security expert Clayton (John C Reilly) who says he hates all Arabs including the blacks, the Jews, and the people from the film Avatar, and then tells the dictator that he should go see the Empire State Building before a terrorist blows it up. Then when his double gives a speech to the United Nations he pees in a water pitcher, drinks some of his own urine, and then drops some on the Israeli Ambassador to the U.N. The skits just keep up like that all the way to the end getting crazier and crazier.

If that’s your type of humor then you will love The Dictator. It will have you laughing out loud.
C

R. PerezReviewed in the United States on October 19, 2018
4.0 out of 5 stars
If you're a Sacha fan - You'll enjoy the movie
Verified purchase
As with so many of his films, they're not big hits at theaters but on cable and home video they're big hits. This is no exception, the Dictator has gags, and tropes similar to his other films which make you laugh yet wince at the same time. He's cut throat in presenting the reality of our society and that's what makes him so good.
11 people found this helpful

HopefulConsumerReviewed in the United States on December 7, 2020
3.0 out of 5 stars
a five minute skit . . .
Verified purchase
. . . extended to 72 minutes, followed by ten minutes of closing credits. Some clever satire of course, but shocking moments of misogyny, narcissism, racism, cheerful sociopathy are only funny once or twice each, then just become repetitive. The protagonist here reminds us too much of Borat, without the charm. By the halfway point engagement begins to wane. Nice irony at the end in a sublime speech about dictatorship, which of course describes the US to a tee. It turns out Cohen with scripted actors, without the usual danger of being exposed mid-scene by real-people dupes, is not so compelling. While a major movie star, he appears to lack the skill set to carry a conventional movie . . .
3 people found this helpful

ABS123Reviewed in the United States on January 8, 2021
1.0 out of 5 stars
junk
Verified purchase
The movie starts out with a promise of good laugh. After all, Sacha Cohen was funny in Borat, so I expected the same here. But the punch lines appear contrived and mechanical and as the movie progresses, they get old and tired quickly. There are no redeeming parts but mayhem and hints of violence. The characters are not convincingly played and the acting looks amateurish. The plot line is also chaotic. Bad script, bad acting and unpleasant scenes do not make the movie funny not even with Borat as the lead actor.

All in all, it was an unpleasant movie to watch and I do not recommend it.

The All-Seeing IReviewed in the United States on April 15, 2021
5.0 out of 5 stars
Masterful Political & Social Satire
Verified purchase
Every satirist needs a full quiver of arrows in their war on idiocy, and Sacha Baron Cohen’s sidesplitting post-“Borat” film “The Dictator” only serves to further cement Cohen as our foremost lampooner of the willfully dumb.

Deploying his trademark mix of keen insight and bombastic vulgarity, Cohen brings to life Admiral General Aladeen, ruthless ruler of North African oil state Wadiya. When he’s not enriching uranium in pursuit of nukes, he wins competitive sprints by shooting competitors and race officials. Yet once he’s abducted by America’s lunatic security chief (an inspired John C. Reilly), our dictator gets stripped of his power, money, and beard. In a mellifluous twist, Aladeen turns to altruistic feminist Zoey (Anna Farris) and scorned scientist Nadal (Jason Mantzoukas) to stop his traitorous ex-lieutenant (Ben Kingsley) from turning Wadiya into a democracy.

Throughout, Cohen’s outrageous humor leverages sexism and racism to lambaste the ignorance of both, and all while Aladeen evolves into another elite character sketch within Cohen’s growing Pantheon. Provided you’re not reflexively pouty when presented with the paradoxes of satire, you’ll likely recognize “The Dictator” as the masterful comedy movie it is. - (Was this of use? If so, let me know by clicking "Helpful." Cheers!) WATCHED IT? THEN WATCHLIST: [[ASIN:B07JVSYPZ7 "Stadium Anthems,"]] [[ASIN:B01JBARY4O "Sausage Party."]]

PGReviewed in the United States on February 12, 2021
3.0 out of 5 stars
Typical Cohen movie
Verified purchase
Sacha Baron Cohen likes to test the limits of good taste and vulgarity. Surprisingly enough, there wasn't much of the latter, compared to Borat or Brüno. But it's still not a stellar movie.

Aladeen is the dictator of the little North Africa country of Wadya. Since his nuclear program is deemed to dangerous, Western countries threathen military action. So he travels to NYC to speak before the UN... where his body double is substituted so he can sell his country's resources to foreigners.

Since that movie isn't filmed like a mockumentary like previous movies, it makes it easier to follow and more enjoyable not to track it in real life. Of course, he caricatures conservatives like ignorants, incorporates antisemitism (to a lesser degree, thankfully) and the usual left talking points.

However, willingly or not, he also mocks the "woke" people before they even had a name. Zoe's character and persona is the perfect embodiment of woke; watch the movie to find out why.

In short, this movie is one of Cohen more tolerable ones. It doesn't fly high, but it's in much better taste than both Borat movies for having less overt sexuality and less antisemitism. It's short so you won't waste much time

Yibing WuReviewed in the United States on June 27, 2019
5.0 out of 5 stars
Left no stereotype behind, and see what happens
Verified purchase
If you are ok with the notion that, comedy is a weapon of the Flawed against the Righteous, then you will like this movie. This is not the Larry the Cable Guy type of self-deprecating humor. This one bites. And it feels great! When “Zo-Hayee” screamed at the cop “I majored in fem lit!” I lost it. I hope one day, when people look back they will say, “I can’t believe they allowed this type of movie back then!”
5 people found this helpful

TupliptreeReviewed in the United States on October 25, 2020
1.0 out of 5 stars
Awful Ending
Verified purchase
Yes, it was dirty. Forgiving the dictator because of his upbringing and different county and misunderstanding of American culture I watched it. I thought there was hope. While he was down and out in America (I won't say why.) a selfless lady who ran a health food store offered him a job and mentored him. At the very end, back in his county, he gives his men the signal while he is hugging her at the wedding ceremony. He was still evil. I don't consider that motion and what it means funny.
2 people found this helpful
See all reviews
Back to top
Get to Know Us
Make Money with Us
Amazon Payment Products
Let Us Help You
EnglishChoose a language for shopping. United StatesChoose a country/region for shopping.
© 1996-2021, Amazon.com, Inc. or its affiliates