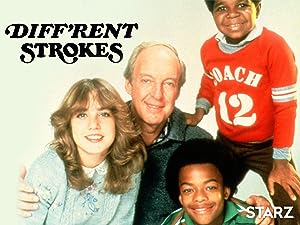 (311)
6.61981TV-PG
Diff'rent Strokes began an eight-year run across two networks in 1978, making stars out of its young lead actors Gary Coleman, Todd Bridges and Dana Plato. The diminuitive Coleman's catchphrase "Whatchu talkin' about, Willis?" became the show's trademark. The story of a pair of African-American brothers adopted by a widowed millionaire, the comedy followed the misadventures of the boys and their n

MikeyReviewed in the United States on October 4, 2012
5.0 out of 5 stars
Fantastic comedy for all the family
Verified purchase
Season 3 of the huge 80s comedy hit Diff'rent Strokes features another 22 episodes spread over three discs. Originally screened in the USA in late 1980 and early 1981.
Lovong the show as a child in the early 80s, I cannot remember any of the episodes on this set, but I do recall seeing Kimberly (Dana Plato) in the opening titles parading down the stairs in her pink outfit.
The child stars of this show have had incredibly bad luck since the show ended in 1986 with the deaths of Gary Coleman (Arnold) and Dana Plato. Todd Bridges (Willis) has also had a bad run with being charged with murder, dealing in drugs and countless run-ins with the police. Not much is known of Canadian Conrad Bain (Phil Drummond) since leaving the show, but according to wikipedia, he's still with us.
The episodes on this set are
The Bank Job (1)
The Bank Job (2)
Small Claims Court
Substitute Mother
The Accident (1)
The Accident (2)
Little Mother
Football Father
First Love
Count Your Blessings
The Loan
Roots
Junk Food Junkie (aka Junk Food)
The Bus
The Older Man
Where There's Hope
The Magician (aka It's Magic)
Drummond's Fair Lady
The Ancestors
Almost American
Room for One More
The Athlete

Take a trip down Memory Lane and watch this set. If you've never seen the show, well you're in for a treat!

David HugaertReviewed in the United States on June 6, 2013
5.0 out of 5 stars
The Drummond (& Jackson) kids grow up
Verified purchase
I mean the above title to be of utmost sincerity, as Arnold, Willis & Kimberly begin to hit puberty during Season Three of "Diff'rent Strokes". This season, the children experience growing pains, as Willis becomes seriously interested in girls, Arnold becomes concerned about his height & Kimberly prefers dating older men. One of the funniest episodes this season is "Junk Food Junkie", where Arnold develops a fetish for edible items that do a body bad. Arnold becomes depressed when he learns he won't grow to be much taller than his prescribed height in the episode "Count Your Blessings". There are lots of great episodes & laughs in this third season of "DS". Gary Coleman, Dana Plato & Todd Bridges have matured in their respective roles, & Conrad Bain's Mr. Drummond is just as provincial & warm-hearted as ever. This season marks Nedra Volz's first full season as housekeeper Adelaide Brubaker. Volz's character is a nice addition to the Drummond family, as her sassy wit & charm wins everybody over - myself included. "Diff'rent Strokes - The Complete Third Season" is sure to be a hit in your all-important DVD collection for everyone in your family, so pick it up ASAP!

Jeffery CanupReviewed in the United States on March 15, 2018
5.0 out of 5 stars
Finally Releasing All Seasons
Verified purchase
Been waiting patiently for many years for every season to be released before I started adding this show to my collection. I love 80s sitcoms and I since I finally own every season of "The Facts of Life" after waiting many years. So I decided I'd just wait until each and every season of Diff'rent Strokes to get a release date at least before I started purchasing and now The Final Season is set to be released in May finally. So I decided to catch up now and I am very happy and excited that I can finally watch this show again over and over anytime I want now. Thank God and thank u so much Shout Factory for finally getting this great gem from my fondest childhood memories released on DVD.

musicfanReviewed in the United States on September 29, 2012
5.0 out of 5 stars
It takes diff'rent strokes
Verified purchase
This is one of those shows that was very popular when I was growing up, and I liked it and watched it all the time. I've seen it in reruns many times over the years, so I wasn't in a rush to buy the dvds. The first season is probably my least favorite, although there are good episodes that I like in that one too. This is one of those shows that I think got better as it got into the second and third seasons.

Some memorable episodes, and some of my favorites, of the series are in this season: the bank robbery; when Arnold is addicted to junk food; Mr. Drummond getting amnesia; Arnold meeting Cathy. There are also some guest appearances from a few of the girls from The Facts of Life-Natalie, Tootie, and Blair.

I hope more seasons of Diff'rent Strokes are released. I'd like to even see the Sam years again.
One person found this helpful

robertReviewed in the United States on December 31, 2021
5.0 out of 5 stars
Grandaughter was SUPER HAPPY
Verified purchase
My granddaughter loves the show she is 10 years old, And was absolutely superstoked. A big smile from ear to ear.
I gave her the entire collection for Christmas

Amazon CustomerReviewed in the United States on April 21, 2021
5.0 out of 5 stars
it's an 80's show
Verified purchase
i enjoy watching this show and they don't make today's shows this good anymore.

Funky DroidReviewed in the United States on July 19, 2012
5.0 out of 5 stars
Greatest Family sitcom ever!
Verified purchase
Yes! Season 3 has finally been released! Recieved my dvd today! When I was a kid this was my favorite sitcome & season 3 & 4 were my favorite seasons, the show still holds up, it's sad the personal lives of the stars has effected the shows recent success, because despite their personal lives behind the scenes, for the viewer,, the show taught so many positive & safety lessons & on top of that the show was straight lol funny, looking forward to seeing more of this timeless classic cause as far as I'm concerned this show should be on heavy rotation like I Love Lucy & Andy Griffith.
2 people found this helpful

Christopher T. RyanReviewed in the United States on July 15, 2012
5.0 out of 5 stars
Thanks soo much!!!
Verified purchase
Finally a 3rd season disc comes out! I have every episode recorded from TV but just isn't the same. I can ditch the custom discs I created. I hope seasons 4 through 8 come out in shorter time period increments to catch up with the 6 year gap since season 2 was put out. Thank you SOOOO much!!!!
4 people found this helpful
See all reviews
Back to top
Get to Know Us
Make Money with Us
Amazon Payment Products
Let Us Help You
EnglishChoose a language for shopping. United StatesChoose a country/region for shopping.
© 1996-2022, Amazon.com, Inc. or its affiliates