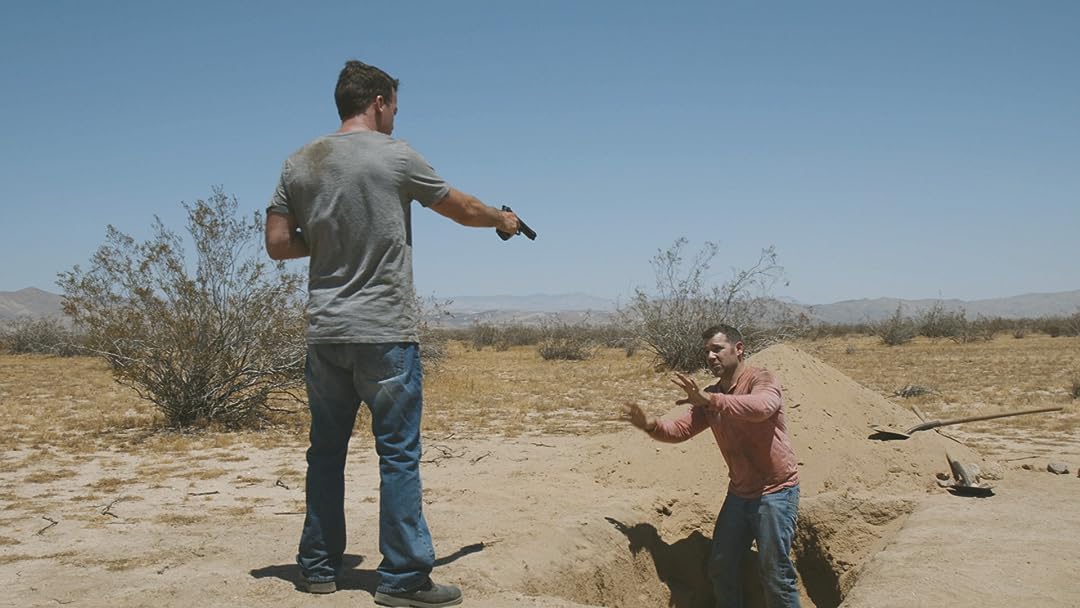 (23)
1 h 22 min201913+
After a heist gone wrong, Tom, a low rent criminal is forced by a local crime boss to kill his partner and best friend. Setting off into the Mojave desert under the guise of moving a body they buried two years ago, Tom delays the deed just long enough for a cadre of colorful characters to descend.

David S. McQueenReviewed in the United States on December 11, 2019
3.0 out of 5 stars
Low Budget/Criminal Pals Forever Flick
Verified purchase
Set in California and Mexico, in the desert and filmed in California (present day).

Tom and his friend apparently were involved in a heist gone bad. They were independent criminal contractors. The mastermind did not like it one bit, so he gave Tom a mission: kill his buddy and bring back proof.

Most of the film involves the two protagonists talking. They both meet girls. More talking. The mastermind's muscle is sent to check to see if Tom carried out the instructions.

Good acting in this one but, gosh, there's no action and no real plot. Then again, it's California so don't expect much action (see also French film making). I took nothing away from this movie except anticipation of violence. When violence occurs, it is not graphic. It's rated "R", but no nudity, minimal graphic violence; I suppose the "R" is for language.

"Reservoir Dogs": Now THERE is a violent film that also has a lot of talking. This film ain't even close.

J.P. RicciReviewed in the United States on October 19, 2019
1.0 out of 5 stars
Betrayal
Verified purchase
Not enjoyable or funny, too dark.
One person found this helpful

Snow CootReviewed in the United States on December 28, 2019
1.0 out of 5 stars
As Bad As They Get
Verified purchase
Cliche, Nonsense Speak, Awful Accent, put in blender... add 10,000 "Bro"s and you have The Diggers
Couldn't watch this on fast forward with captions.

Stephen HarrisReviewed in the United States on June 24, 2019
4.0 out of 5 stars
Kept my attention
Verified purchase
I enjoyed this movie because I didn’t know what to expect, but was pleasantly surprised. There was a good balance of comedy and seriousness. The flashbacks and forwards were a little confusing sometimes, but all in all I liked it. I also think the actors are very talented and handled the script very well.

C. BelcherbrickellReviewed in the United States on July 13, 2019
5.0 out of 5 stars
Take time to watch
Verified purchase
A very laid back movie that’s easy to get into. The guy who stared in it Mike Foy is the dead ringer for this role. He did equally well in Dexter.

papababooReviewed in the United States on October 20, 2019
5.0 out of 5 stars
great surprise!
Verified purchase
Loved everything about this movie, the acting is phenomenal, the dialogues well written, I just had a really good time watching this sleeper of a movie. Highly recommended!

MaryReviewed in the United States on November 28, 2019
2.0 out of 5 stars
Believable Mobster Story w/ No Glitter * Too Slow of a Movie Though
Verified purchase
Slow was the "killer" for me. The movie was believable because of the slowness making it believable as if it is how life probably really is for a mobster, but still. . . . too slow to keep my interest.

D'AnemoneReviewed in the United States on January 15, 2020
1.0 out of 5 stars
Agree with The Guy the Wrote Below
Verified purchase
Cliche, Nonsense Speak, Awful Accent, put in blender... add 10,000 "Bro"s and you have The Diggers
Couldn't watch this on fast forward with captions.
See all reviews
Back to top
Get to Know Us
Make Money with Us
Amazon Payment Products
Let Us Help You
EnglishChoose a language for shopping. United StatesChoose a country/region for shopping.
© 1996-2021, Amazon.com, Inc. or its affiliates