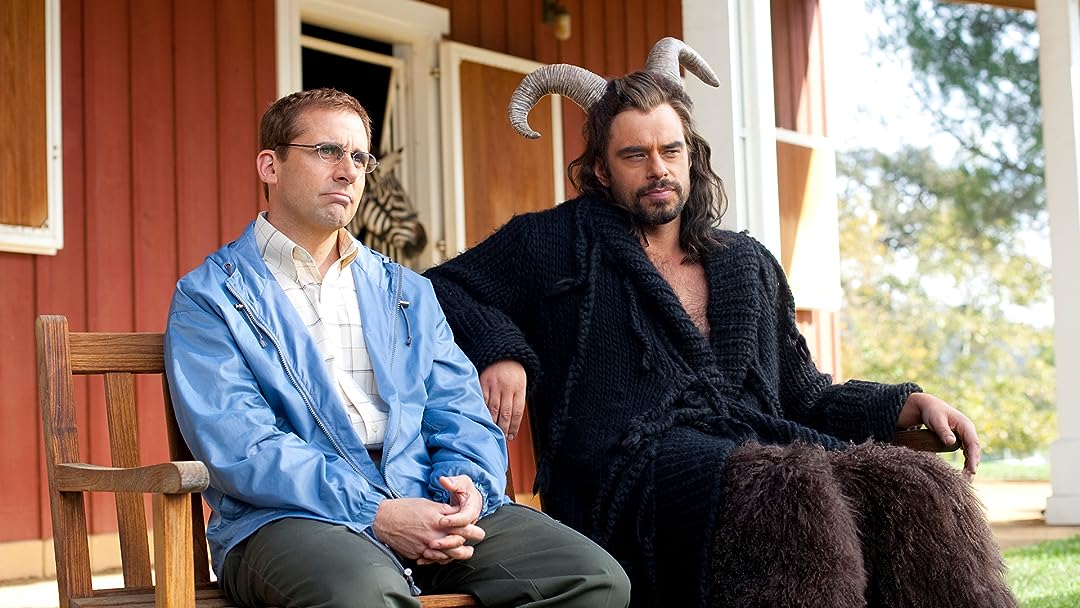 (2,172)
5.91 h 54 min2010X-RayPG-13
After he finds out that his work superiors host a dinner celebrating the idiocy of their special guests, a rising executive questions the merits of his invitation just as he befriends a man who would be the perfect guest.

AlysiaReviewed in the United States on May 14, 2019
5.0 out of 5 stars
Refreshingly funny.
Verified purchase
If the old parable of laughter being medicinal is true, this movie should be freely prescribed. A campy misadventure of a man on the verge of moral ruin saved by a series of hilarious twists of fate. Great plot, intelligent dialogue and a comfortable pace makes this a must watch for any who feel in need of a good dose of laughter and good cheer!
22 people found this helpful

SylReviewed in the United States on May 16, 2019
1.0 out of 5 stars
Why? Why? Why?
Verified purchase
They had very funny actors (Carrell, Rudd) and a funny story but the movie is still incredibly bad. This is a remake of" Le diner de cons" (or The Dinner Game) directed by F. Veber and I appreciate that Roach tried to tell the story in an American context (the main character is a business guy instead of a famous publisher) but the jokes are so over the top it just becomes ridiculous. If you want a very good laugh go check out the original by F. Veber, that was a mega success in the box office in France for years. This type of cruel dinner games is unfortunately not just a fiction, the original French movie is based on reality.
21 people found this helpful

Patriot4LifeReviewed in the United States on May 10, 2019
5.0 out of 5 stars
Over the top hilarious
Verified purchase
I really found this movie to be clever and absurd. The mouse art is insanely awesome, actually. Steve Carrell is just a genius. Having seen this years ago, and now seeing it again, and now knowing who Jeff Dunham is, was a treat to see him have an acting role. And Zach Galifianakis is also pure genius. When this movie first came out, I really didn't know who he was at the time. Great cast ensemble. Hilarity from the moment Paul Rudd hits Carrell with the car. I recommend this movie HIGHLY to anyone who wants a good laugh.
15 people found this helpful

AlwaysOnAmazonReviewed in the United States on May 26, 2019
2.0 out of 5 stars
Not worth 1:54 of your life
Verified purchase
This is one of the worst movies I've seen in many years. He plays the same type of clueless character he did in the office (which was funny). However, this isn't balanced by the other funny characters and sub-plots, as in The Office. I gave two stars for the appeal of his imaginative "art", the sometimes funny Kiersten character, and the straight man role in the movie, which is the only thing that kept me watching. Predictable. Over the top. Not in a fun way.
12 people found this helpful

SPAMReviewed in the United States on June 25, 2018
1.0 out of 5 stars
Really Bad.
Verified purchase
I've come to realize is pretty much a remake of The Cable Guy starring Jim Carrey, but worse. For starters nothing is believable and there are maybe a few good jokes. While I was watching it recently I remembered almost half-way that I had tried to watch it back when it was new. I almost stopped again, but decided to see it though (mostly because it had David Walliams of Little Britain). The film is about people having a dinner where everyone brings an idiot, but they decided to heavily pad the paper-thin plot with over the top comedic performances. All the comedians try way too hard, but none of it pays off. Lastly, I don't know why people call this film dark humor. It's not. It's typical toilet humor. Just watch The Cable Guy if you are in the mood for some dark comedy.
26 people found this helpful

joel wingReviewed in the United States on July 30, 2020
2.0 out of 5 stars
Made the characters too dumb so went from funny to just plain bad writing
Verified purchase
When Dinner For Schmucks came out in the theaters I was disappointed. I thought it didn’t live up to its potential. The story focuses upon Tim Conrad (Paul Rudd) an investment analyst hoping to move up at his firm. In order to do so however he has to attend a dinner hosted by his boss where each guest brings an idiot. The biggest loser wins. Conrad hits Barry Speck (Steve Carell) with his car. It turns out Speck is not only eccentric but dumb as well. Conrad thinks he’s the perfect candidate for the dinner. The movie ends up being about how Barry and Tim become friends and subvert the bosses plans. it still hasn’t aged well.

The problem with the movie is that they just made it too dumb. If you make people a little dumb then it can be funny. If you make them totally stupid you go from laughing to shaking your head at the writing. That’s what happened with Dinner For Schmucks.
C

Butterflymom54Reviewed in the United States on October 13, 2019
4.0 out of 5 stars
Steve Carrell is funny!
Verified purchase
I like Paul Rudd as an actor. Steve Carrell plays a very funny part here. I like the premise of the movie. There are many scenes meant to offend. I am generally not a fan of that type of humor yet it always elicits a response of laughing anyway. What I like the most was the mouse art. It was genius. This is one of those "I am trying to better myself in my job yet I will have to sell my soul to the devil", movies. Paul Rudd is a talented analyst working for a jerk and, among jerks. He is challenged to join the so called rat pack, at work in a dinner whereby each guest invites an idiot guest and whoever is judged to be the most idiotic, wins. Hoping to get a promotion Paul's character happens upon someone he thinks might fit the bill, even as his girlfriend warns him not to. He does and hilarity ensues as well as stupidity. The mouse presentation is accepted and is wonderful. Watch the movie, if you get it free through Amazon, as I did, just to see that part. I admit I fast forwarded to the dinner scene. I will not knock this movie badly as I chose to watch it and I don't have to regret it, or see it as a waste of time. I simply made a choice, enjoyed the scenes I viewed, and fast forwarded through more offensive scenes. My rating is based on the performances by Paul Rudd, David Wailimson, Steve Carrell and a few other notables, the mouse art and the female dummy. Have a great day! :)

Dan SmithReviewed in the United States on May 15, 2019
4.0 out of 5 stars
Like a Dean Martin and Jerry Lewis comedy.
Verified purchase
Carell is so good in delivering what the script calls for. He played it well, with Rudd the more straight man trying to climb the corporate ladder. Reminds me of a Martin and Lewis comedy.
9 people found this helpful
See all reviews
Back to top
Get to Know Us
Make Money with Us
Amazon Payment Products
Let Us Help You
EnglishChoose a language for shopping. United StatesChoose a country/region for shopping.
© 1996-2022, Amazon.com, Inc. or its affiliates