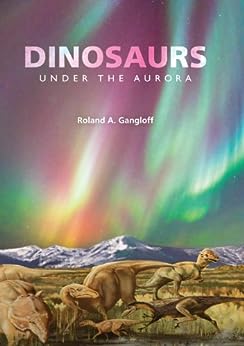 Dinosaurs under the Aurora (Life of the Past) Kindle Edition

by Roland A. Gangloff (Author) Format: Kindle Edition
Part of: Life of the Past (40 books)
See all formats and editions
Sorry, there was a problem loading this page. Try again.

In 1961, while mapping rock exposures along the Colville River in Alaska, an oil company geologist would unknowingly find the evidence for a startling discovery. Long before the North Slope of Alaska was being exploited for its petroleum resources it was a place where dinosaurs roamed. Dinosaurs under the Aurora immerses readers in the challenges, stark beauty, and hard-earned rewards of conducting paleontological field work in the Arctic. Roland A. Gangloff recounts the significant discoveries of field and museum research on Arctic dinosaurs, most notably of the last 25 years when the remarkable record of dinosaurs from Alaska was compiled. This research has changed the way we think about dinosaurs and their world. Examining long-standing controversies, such as the end-Cretaceous extinction of dinosaurs and whether dinosaurs were residents or just seasonal visitors to polar latitudes, Gangloff takes readers on a delightful and instructive journey into the world of paleontology as it is conducted in the land under the aurora.

Gangloff makes both modern and ancient Alaska come alive for the armchair palaeontologist.

Dinosuars under the Aurora immerses readers in the challenges, stark beauty, and hard-earned rewards of conducting paleontological field work in the Arctic. . . . Gangloff takes readers on a delightful and instructive journey into the world of paleontology as it is conducted in the land under the aurora.

in his book, [Gangloff] demonstrates the importance of arctic paleontological research―especially in Alaska―and shares his experience with field research in an easy to read format.

Using his own distinguished career as a springboard, Gangloff has assembled an accessible and eloquently written introduction to the history of dinosaur research in Alaska, where it presently stands and what the future might hold.

― newsminer.com --This text refers to the hardcover edition.

Gangloff's engaging, personal writing style in Dinosaurs Under the Aurora leads the reader to imagine themselves in the room with him personally enthusing you about the polar dinosaurs of Alaska with a wry comment or two along the way. This book tells just how these unique fossils were collected under the trying conditions of working in the High Arctic along with detailing the scientific significance of these unique fossils, in both narrow and broader contexts. Fascinating are Gangloff's observations on the social setting in which his own research projects were carried out. And most intriguing of all are the unanswered questions that he posits, whetting the appetites for future researchers.

-- Thomas H. Rich and Patricia Vickers-Rich ― authors of Dinosaurs of Darkness --This text refers to the hardcover edition.

B. Ingersoll
5.0 out of 5 stars A Personal Memoir of Alaskan Paleontology
Reviewed in the United States on September 8, 2021
Verified Purchase
As a memoir on dinosaur hunting in Alaska, this book is very insightful. The writing style isn't always the most artful, but that's not the point; the author spent decades of his professional career searching for fossils in remote locations, and this is his story. Readers looking to learn more about paleontology as a profession will find this book of values, but anyone looking for pithy synopses of the dinosaurs themselves will be disappointed.

I appreciated the fact this book avoided in-depth discussions about cladistics, which always devolve into pointless digressions about how five different researchers have five differing opinions about bone morphology -- capped with a gratuitous "That's how science works!" defense. Instead, this book sticks to the basic facts. (And as I understand it anyway from additional reading, some of the thinking on who these dinosaur species has changed since the book was published.)

On the other hand, several pages are sacrificed to the pointless pursuit of poking holes in creationist "theories." I think it's safe to assume that anyone interested in this book's basic premise is harboring no such doubts and doesn't need the extra level of convincing.
Read more
Helpful
Report abuse

Charles J. Hardy
5.0 out of 5 stars A serious pleasure
Reviewed in the United States on August 11, 2012
Verified Purchase
As a peer reviewer I recognize a careful, scholarly work when I see one. I rarely read one in which the author's pleasure in doing cold, dirty, painstaking work shines through so nicely.The title (Dinosaurs Under the Aurora) is a tip-off.

If you are a paleontologist who will not blink at this punctilious process, adding knowledge about a blizzard of taxonomy, you will be right at home in this. If it's all new to you it won't be when you finish but you will enjoy the experience as much as the author does.

I bought this from Amazon instead of the university bookstore because it saved me the cold, dirty trip.
Read more
9 people found this helpful
Helpful
Report abuse

Mark Rose
3.0 out of 5 stars Gangloff does well but narrow for me
Reviewed in the United States on June 18, 2017
Verified Purchase
Does a good job describing the north slope and challenges these scientists face. The Alaska dino story is an exciting one and the author captures it well. Good read. 3 stars because, like most in the science community he allows his pro-evolutionary bias mask over the big picture in Alaska, that is, evidence of a catastrophe of unparalleled scope and power using the force of water, volcanic activity and heat. He dodges the find of an intact herd of dinos found inmasse and only partially fossilized on the Colville. The oft referred to "trackways" mentioned are curious, where thousands of dino and avian tracks have been found together, suggesting a flee in panic and massing atop hills to escape rising water. Said trackways are cemented in a paste that can only occur in specific circumstances not found today, a substance that should have eroded away along with the tracks they contian only a few thousand years past, not tens of millions, a simple check of erosiin rates proves this and math doesn't lie. Why are they so common in Alaska, across the American West and the world? yet Gangloff takes them for granted with no explanation. Mammal fossils are also found on the Colville, a fact the author conveniently avoids. Further, it's only fair to note the prolific numbers and specie of mammals such as the huge buffalo, mammoth and other mega fauna found in Alaskan gold beds, these with their flesh boiled off and infused with gold. To transport gold among these bones requires water temperatures exceeding 1900F, providing a clue suggesting a watery catastrophe oft spoken of in native lore yet one Gangloff dismisses. Fossilization requires quick covering by water with the right minerals, so attaching millions of years to these processes are a construction based on conjecture, not reality. Thank you.
Read more
One person found this helpful
Helpful
Report abuse

kracker
1.0 out of 5 stars Boring
Reviewed in the United States on September 6, 2012
Verified Purchase
The book was wordy and boring. The book obviously needed a good editor. The book used only scientific names and for someone that is not a paleologist the names were confusing and didn't help with the understanding of the findings. It seemed as if the book could have been half as long and been interesting but the same information was given over and over again. There could have been more maps and or pictures which would have brought it to life but there was few of each. I would not recommend this book to anyone except a most ardent paleologist.
Read more
5 people found this helpful
Helpful
Report abuse

Victoria C Leo
5.0 out of 5 stars Love dinosaurs? Love Alaska and the Arctic? Love hearing about science as it really works? You'll love this book.
Reviewed in the United States on September 5, 2016
I read this while visiting Camp Denali, Alaska, on a rainy day, so I didn't purchase it, but I found it so riveting, I could barely put it down to sleep. If you love dinosaurs, and can read a serious science book - meaning that you want to read about all the evidence/data collecting, not just the cool headlines - this is definitely the book for you. I predict that if you find it in a library, you will want your own copy. The author talks about how and why paleontologists started looking in the arctic. I knew all about the antarctic circle/australia dinosaurs so I was fascinated to see what turned up in Alaska and other high northern latitudes. Of course, the land was farther from the pole, but still within the realm of cool and dark for so long. The author takes you through all the various finds, and how each new idea led to more ideas until we have the University of Fairbanks Museum with a whole section on Arctic dino finds. The political maneuvering with national, state, agency and private lands is a never-ending pain-in-the-neck. A great book!
Read more
One person found this helpful
Helpful
Report abuse
See all reviews