Dinotrux and millions of other books are available for Amazon Kindle. Learn more
Share 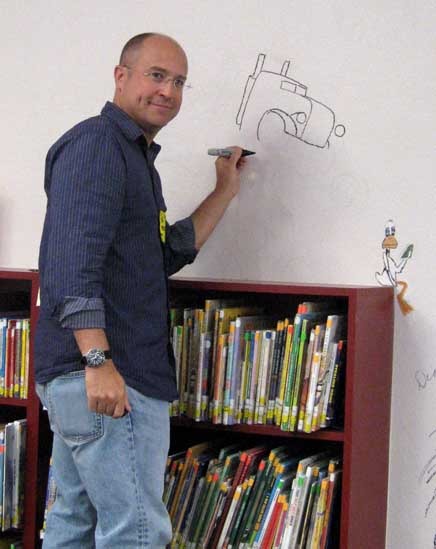 Customers who bought this item also bought these digital items

* "This title will be hard to keep on the shelves."―School Library Journal, starred review

* "Dinotrux ruled their world, now they're likely to rule this one too. Bellow on!"―Kirkus Reviews, starred review

Praise for Revenge of the Dinotrux:
* "Gall's dinosaur/machine mash-ups are, once again, the star of the show, commanding attention (and generating laughs) in every action-filled, rust-toned scene."
―Publishers Weekly, starred review

"Young fans of all things big and noisy will make trax for this dynamic dino-diversion."―Kirkus Reviews

"Dramatic, full-page illustrations brim with the energy of these fierce machines.... A fun follow-up, appealing to old and new fans alike."―School Library Journal

"Chock full of personality.... This is sure to be a winner with elementary readers."―Library Media Connection

Chris Gall is the award-winning author and illustrator of Dog Vs. Cat, Awesome Dawson, Revenge of the Dinotrux, Substitute Creacher, Dear Fish, There's Nothing to Do on Mars, and Dinotrux, a Publishers Weekly Best Children's Book. His books have received numerous starred reviews and awards including a Kirkus Reviews Best Children's Book citation for There's Nothing to Do on Mars. Chris has won a multitude of awards from organizations like the Society of Illustrators and Communication Arts Magazine, and is also the illustrator of America the Beautiful, a Publishers Weekly Best Children's Book. He lives in Tucson, Arizona.

Read more
Start reading Dinotrux on your Kindle in under a minute.

4.3 out of 5 stars
4.3 out of 5
153 customer ratings
How does Amazon calculate star ratings?
Amazon calculates a product’s star ratings based on a machine learned model instead of a raw data average. The model takes into account factors including the age of a rating, whether the ratings are from verified purchasers, and factors that establish reviewer trustworthiness.
Top Reviews

The book itself is well written. The wording and creativity about dinosaurs being prehistoric trucks and construction equipment definitely has won my son over. He especially enjoys the part of the book that talks about the blacktopadon needing to "go" all the time.

The hardcover version is what we bought and the pages are nice and sturdy. The size of the book makes it not too small and not too big. It's not heavy or terribly bulky.

We've had the book for only 10 minutes and Its already been read 3x.
Read more
5 people found this helpful
Helpful
Comment Report abuse

Comtesse GigiTop Contributor: Coloring
VINE VOICE
4.0 out of 5 stars The Book that Inspired a Netflix Series
Reviewed in the United States on December 29, 2015
Format: Board bookVerified Purchase
If you've seen the Netflix series, this is where the inspiration that series spawns from. However, the DinoTrux in the book and the series are not compatible, but, if your little one likes the series they are sure to like this book too.

The book explains how millions of years ago, Dinotrux ruled the world. Cavemen are scared of them, the DinoTruxs stomp, crush, and bash their way through everything. They are just plain unruly until a giant rain storm basically rust out the DinoTrux. However, some of the DinoTrux manage to flee south and become nicer and helpful versions of their older selves. The book basically insinuates through pictures that today's cars and trucks are the "evolutionary" versions of yesterday's DinoTrux. (No, this is not a book about evolution).

At first glance, I thought this book would be too scary for my 3 year old. The pictures are a bit "dark" and look menacing (as the DinoTrux are towards the cavemen, who look like they are wearing glasses, and animals). However, my son loved it. He sat through the entire book and said, "oh no!" as the DinoTrux were rusting out from the rain. While it's not my favorite book that we have in our library, I can tolerate it and since my son likes it, I love it.
Read more
4 people found this helpful
Helpful
Comment Report abuse

Carrie Czerwinski
5.0 out of 5 stars Great kid's book
Reviewed in the United States on February 18, 2019
Format: Board bookVerified Purchase
This book makes my 3 year old very happy. It is cute and creative, and moderately entertaining the first 80 times you read it. That's just the first night.
My 3 year old actually knows all the words to this book, and regales me, through the baby monitor, with each line of this book as he flips through it at 3 in the morning when he has woken up for no apparent reason. In fact, we have read this so many times, that I have even started dreaming about reading this book. It's one of those loop dreams where you feel like you have been reading for hours and the book never seems to end.
I have tried reading Dr. Seuss and some of the other fabulous children's authors to him, and he really enjoys them. Until I finish. Then we have to read Dinotrux six times, get some water, read it 114 more times, and then he requires that he gets to keep it next to him in bed.
Your kid will love this book.
Read more
Helpful
Comment Report abuse

Mieshka
5.0 out of 5 stars Nice images, Fun Book!
Reviewed in the United States on July 21, 2012
Format: HardcoverVerified Purchase
I thought my son would go crazy for this book and maybe he's just a little young for it. We have Substitute Creacher, which he really loves. I thought this would be a natural like for him. He likes it and he loves the end papers with the evolutionary images of truck vs. dinotrux. The illustration is amazing as with all Chris Gall books. The story is just kind of blah to me. I think we both like books with more story to them. All and all I'm sure he'll like it more as he gets older..since he's just 2. I heard they have been making a movie of this book for some time now. That would be interesting if it happens. I'm sure many boys would go crazy for it.

*I wanted to write an update to this review..now that my son is a few months older ... he LOVES this book. He loves the Dino Trucks and roars through out the story. I have also really gotten into reading it and use a sort of B movie voice to tell the story. This has been really fun for me and he likes it even though he seems to wonder if it's me talking or someone else! He is definitely really fascinated by this book now. It's a HIT!
Read more
2 people found this helpful
Helpful
Comment Report abuse

Jesse's mom
3.0 out of 5 stars Not great if you're a fan of the show first
Reviewed in the United States on November 2, 2015
Format: PaperbackVerified Purchase
Props to Chris for imagining these creatures but if you're coming from the netflix series you may be disappointed. No characters/development. Much more scary and violent for kids. It's my two year olds favorite show but he doesn't like these books at all. He says "all done" after a few pages.
Read more
6 people found this helpful
Helpful
Comment Report abuse

Baxter
3.0 out of 5 stars My Kids LOVE Chris Gall
Reviewed in the United States on April 3, 2014
Format: PaperbackVerified Purchase
Here's my take on the Chris Gall books. He is totally awesome when it comes to just plain fun use of imagination. Like all the Chris Gall books, this one taps into the way kids think and pretend. Also, dinosaurs + trucks is a synergistic combo, so I think this book could not go wrong. My problem is that the writing is simply sub par. There are grammatical errors, awkward transitions between ideas, and no clear sense of the narrator or dialog. I feel like these are problems with a lot of kids books. I am always looking for books with good writing so my kids can learn how to properly tell a story. Writing quality aside, the idea is original and fun. Also I should mention that the artwork is really great in all of his books. He's a very talented artist.
Read more
One person found this helpful
Helpful
Comment Report abuse

Jessica B.
5.0 out of 5 stars Dinosaurs+trucks= win!
Reviewed in the United States on February 15, 2020
Format: Board bookVerified Purchase
This book is super cute. If your child likes trucks and dinosaurs, and you’re okay with poop innuendo, Then this is the book for you! I got this as a gift. My kid liked it so much that I now buy it as gifts for other kids.
Read more
Helpful
Comment Report abuse

Libbe
1.0 out of 5 stars Really dumb book
Reviewed in the United States on February 25, 2020
Format: Board bookVerified Purchase
This is the dumbest book. It combines trucks with Dino names to make these ridiculous hard to pronounce names that benefit nobody. My toddler also finds this book to be ‘scary’. Book was returned.
Read more
Helpful
Comment Report abuse
See all reviews from the United States

F. Cortiglioni
4.0 out of 5 stars Nice and fun and great idea
Reviewed in Italy on May 4, 2015
Format: Board bookVerified Purchase
I liked it and especially my son loved it. The idea is excellent: combine dinosaurs and trucks. You need nothing else to capture a child's enthusiasm. Drawings are nice too.
The only "fault" and why I don't leave 5 stars is that there is basically no plot, no story. Ideas are super cool but they are static.
Anyway a good purchase.
Read more
Helpful
Sending feedback...
Thank you for your feedback.
Sorry, we failed to record your vote. Please try again
Report abuse

Amazon Customer
5.0 out of 5 stars Five Stars
Reviewed in Canada on July 27, 2018
Format: Board bookVerified Purchase
One of my son's favourite books. Loves the show so naturally, he loves the book that inspired it.
Read more
Helpful
Sending feedback...
Thank you for your feedback.
Sorry, we failed to record your vote. Please try again
Report abuse

Janet Thirnbeck
5.0 out of 5 stars Dinotrux
Reviewed in Canada on February 19, 2013
Format: PaperbackVerified Purchase
My Grandson loves it had one from library and dit not want to give back! Fast and would shop here again
Read more
Helpful
Sending feedback...
Thank you for your feedback.
Sorry, we failed to record your vote. Please try again
Report abuse