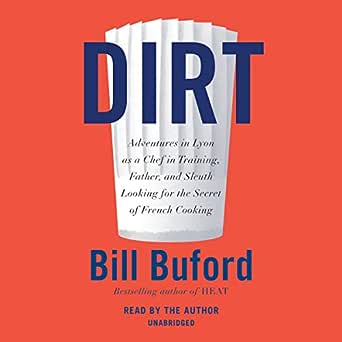 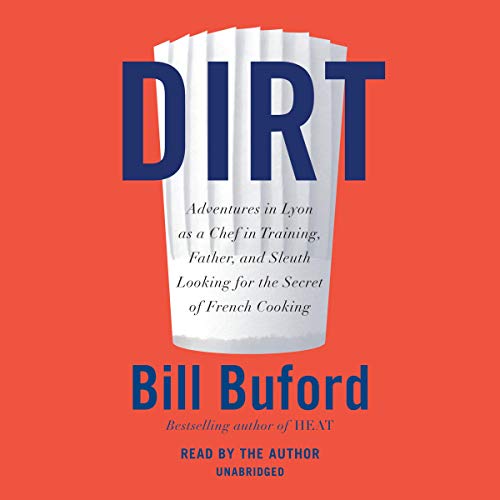 Dirt: Adventures in Lyon as a Chef in Training, Father, and Sleuth Looking for the Secret of French Cooking

Dirt: Adventures in Lyon as a Chef in Training, Father, and Sleuth Looking for the Secret of French Cooking
Bill Buford (Author, Narrator), Random House Audio (Publisher)
Get this audiobook free.
$14.95/mo after 30 days. Cancel anytime

4.3 out of 5 stars
4.3 out of 5
59 customer ratings
How does Amazon calculate star ratings?
Amazon calculates a product’s star ratings based on a machine learned model instead of a raw data average. The model takes into account factors including the age of a rating, whether the ratings are from verified purchasers, and factors that establish reviewer trustworthiness.
Top Reviews

proreader
3.0 out of 5 stars Beautifully written and constructed but can't get past one thing...
Reviewed in the United States on May 11, 2020
Verified Purchase
Bill Buford is a wonderful writer and this book is in many ways a pleasure to read. But my enjoyment was diminished by how cavalier he is about abandoning his wife to raise twin toddlers mostly on her own because he thinks it might be fun to work in a restaurant. There are, in fact, many wonderful restaurants in NYC where his young family lives, yet he needs to spend four days a week away from them in DC working in one? And then after he uproots them to France he thinks it will be fine to leave them for long stretches yet again? Why even have children if this is your attitude towards spending time with them? Why do this to someone who you have agreed to partner with to raise them? If this doesn't bother you, then I actually do highly recommend this book, as my objections have nothing to do with its literary quality. I almost feel bad for criticizing it for the reasons I do, although on the other hand, it's a memoir and if the author chooses to lay his life bare this way, I think it somewhat validates a critique on these levels.
Read more
37 people found this helpful
Helpful
Comment Report abuse

Aran Joseph CanesTop Contributor: Philosophy
TOP 100 REVIEWERVINE VOICE
5.0 out of 5 stars So Much More than an “Off the Beaten Path” Memoir
Reviewed in the United States on May 7, 2020
Verified Purchase
Dirt is so much more than its rather zany premise. Many readers might focus on the author’s decision to leave his comfortable life as an editor at the New Yorker to plunge into training in the culinary arts in Lyons. It is easy to sympathize with his wife and twin toddlers who had their lives uprooted and discombobulated by what could be referred to as a strange whim. However, what may seem like a whim turns into years devoted to apprenticeship.

But really the book has so many interesting things to say beyond the cliche of “let’s do something off the beaten path and write a memoir about it.” The book explores the relationship of France and Italy—both culinary and cultural—the peculiar role food plays in French culture, what life is like in Lyons beyond the typical romantic image of France and the changing aspect of male chauvinism in French kitchens.

Ultimately, it gets at something even deeper. How food is tied up in what it means to be human. And while the theme of unnatural, processed food and its effects on this primordial relation are well known, it has rarely been plumbed better.

Don’t get me wrong. There are many pages of meal creation that will delight any foodie. But the author aims at something deeper, beyond the surface descriptions of exotic French dishes and eccentric coworkers.

I thought this book would be a pleasant diversion but I actually would recommend this book to anyone wanting to understand contemporary France as well as those simply with an interest in French cuisine. If nothing else, it carries an intellectual heft not common in mere diversions. Somewhat like a good restaurant it has something appetizing for every reader.

Alan
5.0 out of 5 stars Buford Digs Deeper in Dirt
Reviewed in the United States on May 13, 2020
Verified Purchase
Dirt is an absolutely outstanding book. It’s substantial fare, but I devoured it quickly. I anticipate going back to it in the future to better savor certain sections. You don’t have to, but I recommend reading his book, Heat, before reading this.

Having learned a lot about working in a restaurant kitchen (Babbo), Italian cooking, and the Italian approach to food (see Heat published in 2006), Buford feels compelled to take the same approach with French cuisine. His wife, who speaks French and is a wine expert, is supportive and crucial to making it happen. They end up living in Lyon, France, with young twin sons for five years from, I believe, 2009 to 2013.

Although Buford had some pretty good introductions to French Chefs via his contacts in the U.S, it was no easy matter getting into a French kitchen. He studied at a famous culinary school there, worked at a well known restaurant, and also a bakery and participated in more rustic food preparations such as the butchering of a pig and making of sausage. I think it helped that he did a couple episodes of a food show for the BBC while there and he and his wife were able to form friendships that exposed them to more of the culture than a tourist would be able to discover.

He wonderfully describes the French kitchen team “le brigade” and the seriousness they bring to their craft and their adherence to the rules. These rules become the foundation for tremendous creativity as demonstrated by one of his mentors, the chef Michel Richard. Working in a French kitchen iis extremely demanding work, and there is a pride in the rigor and discipline they have. Unfortunately, bullying also seems to be prevalent.

One of the themes running through the book is the relationship between Italian cooking and French cooking--namely which influenced the other--and Buford dives deep into Renaissance history. This was a topic I had little familiarity with and found it interesting, although it got a little tedious for me during points such as the comparison of French ragout to Italian ragu and the changing meaning of the term vinaigrette.

I would have liked it if there had been pictures included in the book. If you’re curious like me, search in Google Maps for “Boulangerie Saint Vincent, Lyon France,” to see the bakery that Bill’s friend, Bob, owned and view the neighborhood where the Bufords lived. The backside of that building is the fresque of the Lyonnais.

Robert A Gerard
5.0 out of 5 stars Magical
Reviewed in the United States on May 10, 2020
Verified Purchase
I have always admired Bill Buford, but this book was a real tour de force. Every page evoked another memory of the magic of French cuisine and the people who preserve it. I kept forcing myself to put it down, because I never wanted it to end. Especially in these difficult times, when no one knows what the world he celebrates will look like on the other side, the book provided much joy and some solace. Thank you Bill!
Read more
9 people found this helpful
Helpful
Comment Report abuse

ccl2109
5.0 out of 5 stars Wonderful
Reviewed in the United States on May 14, 2020
Verified Purchase
I’ve been waiting for this book since Buford’s touching story about Bob the baker was published in the New Yorker a few weeks ago. What a lovely journey out of our present quarantine and into a world of egos and flavors and ingredients. Loved every minute of this and am inspired by Buford and his family’s curiosity.
Read more
7 people found this helpful
Helpful
Comment Report abuse
See all reviews from the United States