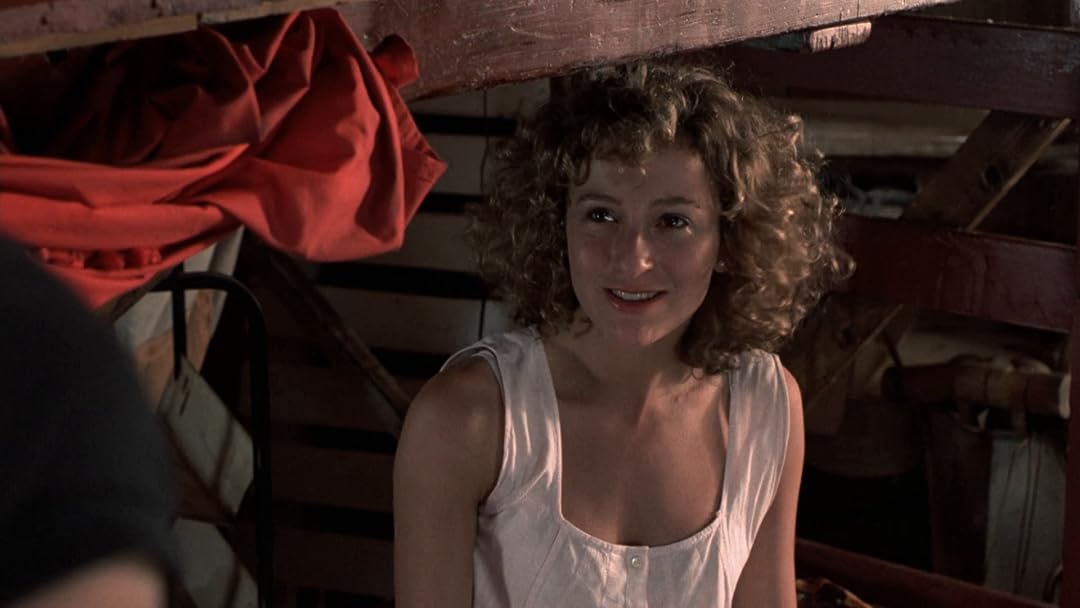 Jennifer GaleReviewed in the United States on February 27, 2017
5.0 out of 5 stars
Wonderful for diehard Dirty Dancing fans
Verified purchase
I have loved this movie since I was 10 years old. I've owned it on VHS, on DVD, and now this beautiful Blue Ray edition.

The "feelies" in the Collector's Edition are nice; I like the map/brochure of the resort, and the mock shooting script was a fascinating read. I loved seeing the "emotive"/motivational tips in the story, and now I finally know how old Johnny was supposed to be in relation to Baby! The script includes most of the deleted scenes, and some other information that didn't make it verbatem into the final cut. The "I carried a watermelon" wristlet seems fairly sturdy, but with some fraying on the cut/unfinished edges inside. As cute as it is, I probably won't use it, instead keeping it with the rest of the box. The same for the Kellerman's keychain and the compact. The "vintage" postcards are nice, and all the printed feelies are very high quality.

As for the movie itself, I've only watched the Blue Ray disc, not the DVD or the digital copy. The print is MUCH cleaner than the 10-year anniversary DVD I have, which looked like it was transferred from an old VHS. There's still a slight grainy quality to the picture, but the colors have been sharpened (some of the clothing and graphics which looked pink on my DVD are now a much more vibrant red) and the audio is crisp and clear.

I have some issues with the closed captions; there are some passages that I know are wrong, some lines that are shortened or condensed (which leave out some of the context of the original lines), and I don't like that they don't at least acknowledge the music cues, as the soundtrack is almost a character in itself. Even a simple "(Big Girls Don't Cry playing in background)" would enhance the captions. I did just use the English subtitle track; maybe the other one is better.

I love all the extended/deleted/alternate scenes included, and the "Happy Birthday, Dirty Dancing" featurette is wonderful, covering the original movie, the stage show, and the upcoming television movie. We saw a truncated version of this feature when we went to the Fathom Events screening, and there's a bit in there that just made me sob happy tears.

Overall, this is an amazing anniversary collection. The restoration of the film is beautiful, the shooting script adds so much more nuance to the story, and the feelies add just a beautiful look into the past.

Weldman69Reviewed in the United States on March 11, 2019
1.0 out of 5 stars
Vulgar dancing
Verified purchase
Title was misunderstood via reviews I read.
For years, I had always I avoided movie, mostly because of the title.
However, after having read the plot and related reviews, then thinking perhaps I'd misjudged the movie, I bought it.
Big Mistake.
Such vulgar moves depicted in first few minutes of movie I had to turn it off and trash the DVD.
Truly, 'the world' thinks highly of this tripe!
Well, so does Satan.
33 people found this helpful

Mike BReviewed in the United States on December 10, 2020
5.0 out of 5 stars
Music fantastic, Dancing unbelievable
Verified purchase
Great movie and played perfectly. Considering I am only a bit younger than the people portrayed in the movie, I can tell you they do a great job with how the people were back then. as teens and early 20s. Swayze was terrific as the hard guy with the soft heart, and Grey was the perfect naive teenager. The chemistry was astounding, and the whole thing took me back to the days in the mid 60s when we went to dance parties with all the great music and friends dancing for hours. Watch the movie, it's great fun, and don't let anyone tell you it wasn't that way back then, because it was very much like that for sure.
12 people found this helpful

TamaraReviewed in the United States on July 26, 2017
5.0 out of 5 stars
Now I've Had the Time of My Life...
Verified purchase
I bought this as a gift for myself. I've always been a die hard DD fan, and I've collected a variety of editions over the years. This one, though, I had the highest hopes for and it didn't disappoint! I opened the box and stepped into Kellerman's. My mom and I used to watch DD together at every opportunity and even though she is gone now, this transports me back to that time. I am able to relive those moments of shared admiration and happiness.
35 people found this helpful

Jeffery CanupReviewed in the United States on July 8, 2018
5.0 out of 5 stars
Watching Dancing on Blu Ray was the time of my life
Verified purchase
Best dance movie ever made. Lionsgate has done this title justice with tons of extras and the best picture and sound quality Dirty Dancing has ever had. This is the version u want cause this movie should be watched loud . If you're a fan of Dirty Dancing then this is the way u want to own it and the best price at under $8 u can't go wrong. Buy this movie today even if u own 1 of the many other versions released over the years u still want this version. Received in perfect condition and on time so get your copy today u don't want to wait
21 people found this helpful

antiquatedReviewed in the United States on May 18, 2021
5.0 out of 5 stars
SO MUCH MORE than Just Another Dance Movie!
Verified purchase
It had been about 10 years since I had re-watched this movie. I was just as enthralled with it now as I was when it came out in 1987! Besides the outstanding dancing, it addresses issues of first love, class differences, and the consequences of certain actions., ALL without losing the main focus on the relationship between Johnny Castle (Patrick Swayze) and Francis "Baby" Housman (Jennifer Grey). The script took full advantage of Mr. Swayze's background as a professional dancer (ballet, jazz, tap, and ballroom dancing); to say that Patrick was sexy is to make the understatement of the decade! Jennifer Grey was also terrific as "Baby" showing just the right amount of wanting to learn to maturity.
According to the bonus tracks of this edition, Patrick was mote than happy to take direction from Jerry Orbach, who played Baby's father. I am SO sorry that both. Patrick AND Jerry passed away before this thirtieth anniversary of the movie. My only complaint about this movie is that there was no opportunity for Mr. Orbach to display his wonderful voice.
In short, I think that this movie should be seen by everyone, from teenagers to grandparents. I truly consider it a classic.
4 people found this helpful

Amazon CustomerReviewed in the United States on April 17, 2017
5.0 out of 5 stars
LOVE IT!!! Dirty Dancing Addict!
Verified purchase
I bought this for myself for my birthday! If you are a HUGE Dirty Dancing fan like I am, then this is what you want to own. I love all the stuff that came with it. The poster, makeup bag, key chain and compact mirror are fantastic. I also love all of the unseen footage and interviews with Eleanor Bernstein, Patrick Swayze and Jennifer Grey! Just BUY IT! You will NOT be sorry!! LOVE THIS!! ;)
36 people found this helpful

CustomerReviewed in the United States on May 1, 2020
1.0 out of 5 stars
Wheres the rest?
Verified purchase
This film is missing IMPORTANT parts. The part where Johnny is spotted with the older woman before baby goes up to find everyone dirty dancing is completely cut out of the movie. Also, the longer exchange with Lisa when baby asks Lisa to cover for her.
6 people found this helpful
See all reviews
Back to top
Get to Know Us
Make Money with Us
Amazon Payment Products
Let Us Help You
EnglishChoose a language for shopping. United StatesChoose a country/region for shopping.
© 1996-2022, Amazon.com, Inc. or its affiliates