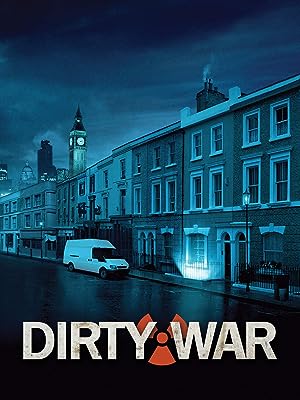 Steve ExcellReviewed in the United States on August 15, 2005
5.0 out of 5 stars
So realistic to be scary....
Verified purchase
Dirty War was produced over a year prior to the London subway bombings by Middle Eastern terrorists.

Prophetically, in Dirty War, First-Responders are planning and training for just such an attack...with inadequate equipment, training and manpower. The Politicians keep reassuring the public that all is well and London is prepared for any attack.

Terrorist cells smuggle nuclear fuels and produce a series of dirty bombs and manage to explode several of them in the London subway entrances. Chaos ensues. The MI-5 and 6, and Scotland Yard investigators step into high gear and intercept several terroristis and bombs prior to their going off -- using video cameras on the London streets.

Does this sound like "life" immitating "art" ? Or, vice-versa? It is. The "docu-drama" format makes it all look so real.

With one viewing of Dirty War, it becomes apparent how dangerous, arbitary and opportunistic the terrorists are.

Amazon CustomerReviewed in the United States on May 6, 2007
5.0 out of 5 stars
Dirty War is realistic portrayal
Verified purchase
Dirty War subtly depicts the delicate balance any government would face between attempts to prepare versus reality - you can't be fully prepared for something like a dirty bomb exploding in a major city. The mass decontamination scene was fairly accurate (your birthday suit and a fire hose; some people not hearing about no eating drinking or smoking until after decon too late) as was the training exercise and the reality gap beweeen the prime minister (local government)and the fire department. For use to depict to non-professional emergency responder personnel the overall complexities and harsh reality being faced daily by government and firefighters/paramedics/etc., this is an excellent movie. It ends with saying how many thousands of years it would be before that section of London would be inhabitable - a sobering thought.
One person found this helpful

9 RavensReviewed in the United States on April 3, 2018
5.0 out of 5 stars
Gloves-off look at the underestimation of disaster
Verified purchase
Very realistic look at a scenario that is likelier than not... begs the question of whether any government is ever prepared for terrorism, and whether the true risks are understood by the populace. Reminiscent of the nuke movies of the early 80s. Highly recommended.
One person found this helpful

Jason R. IinumaReviewed in the United States on September 21, 2005
5.0 out of 5 stars
Realistic and used for training purposes
Verified purchase
I have seen this movie and have studied it. Although it is a fictional movie it nails various problems Western countries "will" face in the future. Intelligence experts know some country in the West, probably Britain or the U.S. will suffer some kind of attack be it a dirty bomb or leveling of a chemical complex.

The problems will be the same. The movie pretty much tells the viewer each one. Lack of equipment, lack of trained people, lack of coordination, lack of planning, lack of communications and a lack of politicians in telling the truth.

All of these problems come to life in the movie, and the movie emphasizes each one in step. The beginning of the movie shows the inadequate training, equipment and coordination. Later on we find out about the problems of communications and planning, and near the end we find out the politicians saying everything is all right.

Whats amazing is that this movie could be used to describe the disaster response that the various U.S. government agencies (federal, state and city)did. All that went wrong in the movie can be matched hand in hand what went wrong in the Mississipi basin.
3 people found this helpful

bookloversfriendReviewed in the United States on March 6, 2007
5.0 out of 5 stars
required viewing
Verified purchase
This is a superb and intelligent film which gives you a look at your future.

The commentary is almost as interesting as the movie. One interesting nugget is the following contradiction: the filmmakers say repeatedly that only 3% of Muslims are terrorists (a claim which is highly dubious). Then, later they quote their English Muslim sources as saying that "their communities are full of people like this" (the terrorists portrayed in the film). If there are only 3%, how can their community be full of them?

The film also shows how easy it is to smuggle radioactive material from the Middle East into England--not "possible." Easy!

Another irony is that the filmmakers gush about how wonderful "multiculturalism" is, blissfully unaware that their own film demonstrates one of the consequences of multiculturalism.

Generally, they don't reveal any tactical information that isn't easily available on the Internet, but in one discussion of how the terrorists communicate with each other, they do. What they don't realize is that such methods show that the terrorists know exactly which methods of communication are being monitored by the government. How do they know such things without inside information?

Finally, at some point, Western governments are going to have to make some tough choices. For instance, even if only 3% of Muslims are terrorists, it is still true that if you deport 100% of your Muslims, you get rid of the 3% who are terrorists. But even though all the other methods have failed miserably to get rid of the terrorists, such an option is regarded as unthinkable.

But consider: Which is worse, (a) to have 300,000 people killed by a dirty bomb and incur billions of dollars of damage or (b) to deport all your Muslims?

It's this tough question that Western governments are going to have to ask eventually or else go down to defeat, because the counter-terrorist experts all agree a dirty bomb will eventually get through.

Note: the HBO DVD puts five minutes of advertisements at the beginning of the film which you can't skip over, can't fast-forward over and can't get out of buy pressing the MENU keys. Start the DVD five minutes before you intend to sit down to watch it.
2 people found this helpful

brian smithReviewed in the United States on November 9, 2018
5.0 out of 5 stars
Definitely you'll enjoy the show
Verified purchase
Loved it

STORM TROOPERReviewed in the United States on February 19, 2016
4.0 out of 5 stars
EDUCATIONAL
Verified purchase
I PURCHASED THIS AFTER PARTS OF IT WERE SHOWN IN A FEDERAL TRAINING CLASS I ATTENDED. VERY REALALISTIC TO ANSWER ALOT OF WHAT IFS IF IT REALLY HAPPENED.
2 people found this helpful

mr. mReviewed in the United States on August 6, 2019
5.0 out of 5 stars
Great movie if you are into potential (real) terrorism scenarios.
Verified purchase
If you are into "what could really happen".
See all reviews
Back to top
Get to Know Us
Make Money with Us
Amazon Payment Products
Let Us Help You
EnglishChoose a language for shopping. United StatesChoose a country/region for shopping.
© 1996-2021, Amazon.com, Inc. or its affiliates