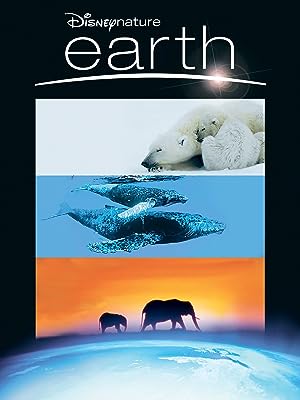 (1,404)8.01 h 29 min2009G
The first film in the Disneynature series, EARTH, narrated by James Earl Jones, tells the remarkable story of three animal families and their amazing journey across the planet we call home.

Jen OSReviewed in the United States on April 19, 2017
3.0 out of 5 stars
EARTH: You're Killing It
Verified purchase
The footage is BEA-U-TI-FUL, but it's shockingly different in style and feel from the other Disney Nature films we own. "Bears" and "Monkey Kingdom" were both very real (telling of dangers, showing fights, and even death) but also light-hearted and story-driven. No lie, "Earth" felt like I was being scolded by Darth Vader because obviously I'm making the Earth die and therefore all of these beautiful animals... I mean, it's true information. The ice caps are melting... and that's why the baby polar bears' dad died.... lying next to prey he was too weak to eat..... because humans... Again, I believe kids should learn about how we negatively affect the planet so they will hopefully continue to try to save it in the future (****, I grew up on Ferngully), but it was pretty jarring to have a few minutes of nature education, then James Earl Jones lowering his already awe-inspiring voice to tell you that all this beauty is dying and it's your​ fault, then some nature footage, then death and destruction... Starving polar bears, stripped rain forests, elephants dying of thirst... Basically, it felt more like a very beautiful and long PSA. Which isn't bad or unnecessary. Just not what I was expecting based on the other Disney Nature films we've seen and might be a little rough for kids old enough to understand what he's saying but possibly not be ready to hear it stated so bluntly.
28 people found this helpful

she_thinks_a_lotReviewed in the United States on October 24, 2016
4.0 out of 5 stars
Great, but not for young kids.
Verified purchase
The footage is amazing - whether it is re-used or not. The stories are utterly captivating and absolutely heart warming. However, I would not want my young kids to see this film, because, just as happens in nature, there is a lot of death of animals. Death is a part of life, but it's not a part that I would want my young kids to begin thinking about. So I'd rather have them skip this movie for now, but any adult who sees it will love it!
9 people found this helpful

BJ KirkReviewed in the United States on August 7, 2021
5.0 out of 5 stars
Earth by Disneynature
Verified purchase
I own several nature and wildlife dvd's. I find them informative and enjoyable. Earth by Disneynature is going to be one of my favorites because it is filled with lots of nature and narrated by James Earl Jones and with lovely scenery, amazing animals and a voice like his how could they not have a wonderful DVD. Loved it.

Brian J. RamageReviewed in the United States on June 5, 2013
5.0 out of 5 stars
This is BBC Planet Earth for kids
Verified purchase
Take the BBC Planet Earth series, condense it, add a nice storyline to make a single movie, add some cheeky commentary/narration by "Lord Vader" and you have this. Oh, don't forget to take out ALL animal deaths, SLIGHT SPOILER – the big cats chase its prey and as soon as the cat "tags" the prey, before the claws snag and teeth chomp to make the kill, the movie moves onto the next scene. Another SLIGHT SPOILER – the one part where an attack and teeth actually make contact is in the Great White Shark and Seal scene which is nicely filmed in super-fast shutter speed, which means super Slow-Motion.

This is great to get children interested in nature. and hopefully one day into "big boy" and "big girl" documentaries like the BBC & Discovery ones.

J. HansReviewed in the United States on June 5, 2012
4.0 out of 5 stars
I LOVE nature... but the Instant Video version does not do this movie justice.
Verified purchase
I love nature videos, and DisneyNature produces some of the best I've ever seen.

The "plot" of Earth is decent. It is well narrated by James Earl Jones.

But what makes these movies so amazing is the imagery and soundscapes.

Unfortunately the Amazon Instant Video version does NOT do this movie justice. I was expecting HD quality, what I got was worse than DVD. In some scenes particularly with a LOT of moving things (i.e. a huge flock of birds, a giant herd of caribou) the compression Amazon adds to their video becomes unacceptably blocky.

The HD version I see they've added probably helps this considerably, but for whatever reason is not available for purchase.

If you want to see this movie in it's full glory, (the glory it deserves) purchase the blu-ray edition, rent the HD version here - OR - wait for amazon to sell a true HD experience.

** The movie itself deserves 5 stars absolutely. The missing star is for the drastic visual distortions from Amazon's video compression.

Amazon CustomerReviewed in the United States on April 28, 2016
5.0 out of 5 stars
Review For Mrs. Belin's 4th Period ES Class J.C.H.
Verified purchase
This movie was great, I loved everything about it, like how they put the entire circle of life into it, and showed just how harsh nature really is. I also liked the narration, it was a voice you didn’t get annoyed with, 3 minutes into the movie. The time lapses were crazy! As well as the super slow motion scenes. I also liked how they followed the families of animals through each of their journeys. From the elephants, to the cranes, and the polar bears, to the whales. Another thing about this film was the amazing music they used. The only thing I can really complain about is the fact that they didn’t go into further explanation on some things that I wished they had, like when the narrator is talking about the penguins and says “You may not know this, but they are one of the few animals with a built in toboggan” I just wish he would have expounded on that. But that is my only complaint about this amazing movie.. J.C.H.
7 people found this helpful

Steven V. RuddellReviewed in the United States on February 26, 2010
5.0 out of 5 stars
An Amazing Photographic Achievement
Verified purchase
Standing ovation for an amazing photographic achievement. Of course, see the whole Planet Earth, but see this too! Or, if the kids lack patience, see Earth instead. How wonderful that we have the technology and to create a film of this magnitude and beauty. What a wonderful testament to our earth. And watch the special feature on the making of earth. This was a challenging film to make with photographers waiting for days, weeks, to get just the right shot for the film. And many of these shots are simply breath taking. Few of us will ever have an opportunity to see the polar bear in its vast, arctic habitat. Fewer still will ever see a Great White Shark hunting seal or see whales in Antarctica bubble netting for krill. What an extraordinary earth we have and if we are wise we'll take action now to protect earth for future generations. This five star documentary is certainly motivation.

Patricia BReviewed in the United States on September 29, 2009
5.0 out of 5 stars
Perfect for its intended audience -- younger children.
Verified purchase
I already own the full length version of Planet earth and bought this version aware that it is a "reduced" version of the much longer Planet Earth. My children (aged 2 and 4) do not yet have the attention span to sit through the "grown up version" and this is a good alternative. I believe it is an excellent way to get children interested in the natural world on their level. There are some "scary" parts, as predators do what predators do, but we have always been honest with our girls about how the natural world works. Wolves get to eat, too. I find the dialogue to be informative and at a level my children can understand - and they like the orchestral musical track.
3 people found this helpful
See all reviews
Back to top
Get to Know Us
Make Money with Us
Amazon Payment Products
Let Us Help You
EnglishChoose a language for shopping. United StatesChoose a country/region for shopping.
© 1996-2021, Amazon.com, Inc. or its affiliates