Distant Thunders: Destroyermen and millions of other books are available for Amazon Kindle. Learn more 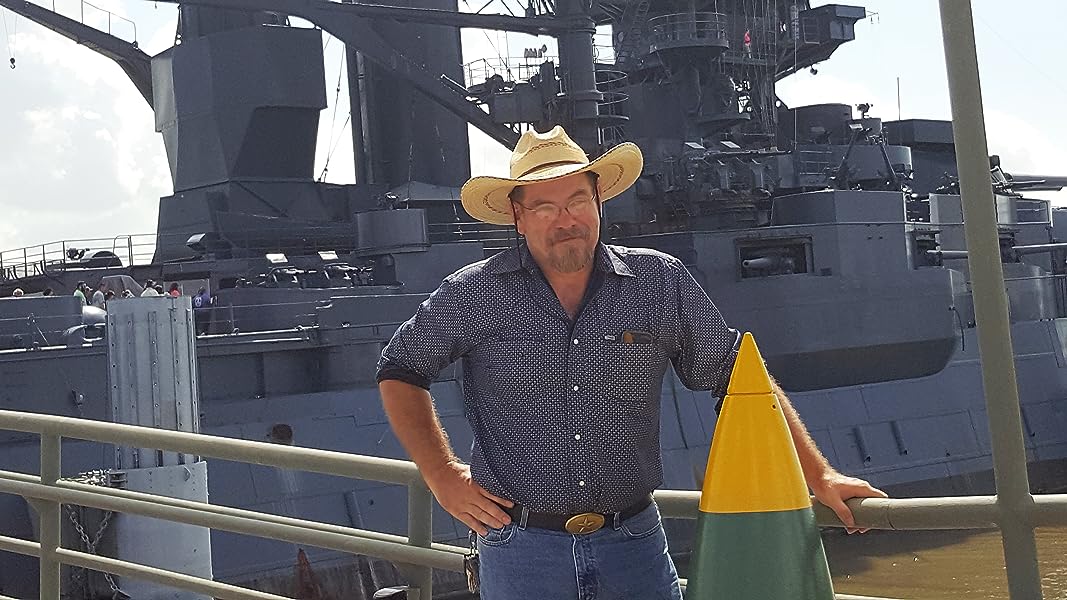 by Taylor Anderson (Author)
4.7 out of 5 stars 335 ratings
Book 4 of 15: Destroyermen
See all formats and editions
Sorry, there was a problem loading this page. Try again.

After the terrible battle between the men of the destroyer USS Walker and their Lemurian allies against the savage Grik, Lieutenant Commander Matthew Reddy is shocked by the arrival of a strange ship captained by Commodore Jenks of the New Britain Imperial Navy—an island-nation populated by the descendants of British East Indiamen swept through the rift centuries before.

With the Walker undergoing much-needed repairs, Reddy knows the Grik have only been fended off, not defeated, and he will need all hands on deck to fight them off when they next attack--but Jenks’ loyalties seem uncertain.

As tension between the Allies and the Imperials mount, Reddy will come to realize that his suspicions are not misplaced—and that a greater danger than the Grik is about be revealed...
Read more
Previous page
Next page

Praise for the Destroyermen series

“Gripping and riveting...I look forward to the unfolding of this series and his subsequent work.”—S.M. Stirling, New York Times bestselling author

“Pick up the Destroyermen series and kick back and enjoy.”—SFRevu

Taylor Anderson is the New York Times bestselling author of the Destroyermen series. A gunmaker and forensic ballistic archaeologist, Taylor has been a technical and dialogue consultant for movies and documentaries, and an award-winning member of the National Historical Honor Society and of the United States Field Artillery Association. He has a master’s degree in history and has taught that subject at Tarleton State University in Stephenville, Texas.
Start reading Distant Thunders: Destroyermen on your Kindle in under a minute.

Taylor Anderson is a New York Times bestselling author, gun-maker, and forensic ballistic archeologist who has been a technical and dialogue consultant for movies and documentaries. He has a Master's Degree in History and has taught at Tarleton State University in Stephenville, Texas.

4.7 out of 5 stars
4.7 out of 5
335 global ratings
How are ratings calculated?
To calculate the overall star rating and percentage breakdown by star, we don’t use a simple average. Instead, our system considers things like how recent a review is and if the reviewer bought the item on Amazon. It also analyzes reviews to verify trustworthiness.
Top reviews

The good dinosaur, bad dinosaur aspect of the story reminded me of the dinosaurs living and working beside people in Dinotopia.

The story is told third person past from multiple points of view. It’s almost an omniscient point of view as the POV pops from one person to another person’s point of view in the next paragraph.

Starship Troopers (1959) (not like the movie) by Robert A. Heinlein is the book that got me started in sci-fi adventures, and has remained one of my top five favorite military science fiction adventure stories for decades. The Forever War (1974) by Joe Haldeman, Armor (1984) by John Steakley, Ender’s Game (1985) by Orson Scott Card, and Old Man’s War (2005) by John Scalzi, round out my top five military sci-fi adventure stories.

Oaktree1
3.0 out of 5 stars Good book, disappointing ending
Reviewed in the United States on November 24, 2018
Verified Purchase
I loved parts of this book and yet was disappointed with the ending. The first 3 books in this series felt like the story, as in the immediate conflicts presented during the book, were resolved by the end of the book. They felt like I'd read a complete story even though there were bigger things left to cover within the world setting. This book ended with a cliffhanger, Princes, Sarah, Dennis, and others stranded on a very dangerous (so we are led to believe) island - the end. At the close of Distant Thunders I felt cheated. It seemed like only half a book. The author, maybe pressured by the publisher, decided to leave this story hanging to force me to buy book 5. Now I won't. The books were good enough to buy one after another without such a device. Bad faith from my perspective. Now I'll look for another series to invest my time and money in.
Read more
One person found this helpful
Helpful
Report abuse

sulu
5.0 out of 5 stars The series in order, with comments
Reviewed in the United States on September 8, 2015
Verified Purchase
Don’t be misled into buying duplicate volumes! It is important to realize that the book clubs have picked up on this popular series and are issuing the successive volumes in double volumes. You can get these on the secondary book market, either here on Amazon or on EBay.
1. Unknown Seas: combines v. 1 & 2
2. Fire on the Water: combines v. 3 & 4
3. Rising Storm: combines v. 5 & 6.
4. Iron and Fire: Combines v. 7 & 8.
The first four volumes are pretty much concentrated on one major confrontation, but by volume 5, Rising Tides, the story begins to splinter into several battlefronts, and we begin to lose many of the secondary characters near and dear to our hero: Matt Reddy.
In case you are new to this wonderful alternate universe series, here are the books in order, both of publication (roughly one per year) and sequence.
1. Into the Storm First two volumes have been combined into one physical volume available used (Unknown Seas)
2. Crusade
3. Maelstrom: 3 &4 also combined into one physical volume,available used (Fire on the Water)
4. Distant Thunders
5. Rising Tides(5 & 6) combined into one physical volume, available used (Rising Storm)
6. Firestorm: More ships come through the squall, including Japanese war ship
7. Iron Gray Sea: Finally Reddy marries Sandra: also published with no. 8, available used (Iron and Fire)
8. Storm Surge
9. Deadly Shores
10. Straits of Hell
We begin with the alternate universe concept. During WWII, in the Pacific Theatre, several ships are involved in a naval battle when a violent storm whips them into an alternative universe. There are three competing species, lemurs, reptiles, and humans. All are sentient and competing species with an uneasy alliance between the Lemurians and the humans.
The story line holds together for the first four volumes. But by the fifth volume, the story has split into so many parts that you will have difficulty following them, if you wait each year for the newest volume. One reviewer noted that it could be solved by splitting the stories into totally separate volumes. This is what Eric Flint has done with his series, to great success.
As it is, those of us who came into the beginning of the series, say in the first three volumes, such as myself may find you have to re-reading the series before progressing further.

mickrj
5.0 out of 5 stars So happy to be wrong about this series
Reviewed in the United States on November 23, 2019
Verified Purchase
I don't like long book series. This one is 15 volumes. I expected to be over the concept quickly. I have never been so glad to be so wrong. I am on #8 now, and can't wait for #9. The writing is well paced, narrative driven, but with well-developed characters. Everything makes sense in this author's universe; but that does not mean boring. It means protagonists you respect and root for facing threats as real as ww2 and as fantastic as Lord of the rings(minus "magic"). If you love world building, problem solving, and battles, start this series now. If the Greatest Generation could come back swinging from Pearl Harbor and take on world-wide fascism, why not a globe-spanning empire of evolving, cannibal lizards?
Also, if you've ever been in the military, you've already met a lot of these characters!
Read more
One person found this helpful
Helpful
Report abuse
See all reviews

Andrew
4.0 out of 5 stars Enjoyable sci-fi fantasy series
Reviewed in the United Kingdom on September 25, 2018
Verified Purchase
I have enjoyed the whole idea of the story - stepping into an alternative Earth where things are the same but different. Evolution has moved a different way - and there are lots of threats and challenges to be faced - and allies to be made.
One big irritant for me is the constant restating of who is who and what is what for the first third of each and every book - and often throughout. Oh and one more thing - the main theme is really war. Lots of it. But it's well done.
Read more
Report abuse

Graeme Goldsworthy
5.0 out of 5 stars Us Brits massively stereotyped - but GREAT fun
Reviewed in the United Kingdom on November 26, 2020
Verified Purchase
Fabulous series of books. Alternate Earth Alternate Dimension genre worked extremely well. Of course it’s a bit ‘Team America, World Police’ and as a Brit you need to look past the fabulous but, to be expected, stereotyping. Once you’re past that hurdle and appreciate the irony, you can settle back into a superb reading journey.
Read more
Report abuse

Mieczyslaw Kasprzyk
5.0 out of 5 stars This series just gets better and better!
Reviewed in the United Kingdom on October 18, 2012
Verified Purchase
Wow! What can I say. This series has just grown better at each stage but THIS book! Thrilling, action-packed, edge-of-seat stuff! The cuddly meerkats are no longer "meerkats"... they're just characters in the story and only occasionally are you reminded that they have fur and tails! The nasty lizards, the Griks, are no longer simply mindless, carnivorous killers but have also taken on deeper characteristics. ...and now a further dimension has been added to the tale. I cannot recommend the Destroyermen series highly enough - entertainment is a given, thrilling is a byword.
Read more
Report abuse

Kindle Customer
5.0 out of 5 stars A very good read
Reviewed in the United Kingdom on March 25, 2019
Verified Purchase
Another excellent instalment in the destroyermen series.
Read more
Report abuse

Guderian
5.0 out of 5 stars Contin uing a Great Story
Reviewed in the United Kingdom on October 1, 2018
Verified Purchase
More adventure with Ad-mah-raal Reddy and crew, vs the Grik and with the added spice of the New Britain Empire. Cracking!
Read more
Report abuse
See all reviews
Back to top
Get to Know Us
Make Money with Us
Amazon Payment Products
Let Us Help You
EnglishChoose a language for shopping. United StatesChoose a country/region for shopping.
© 1996-2022, Amazon.com, Inc. or its affiliates