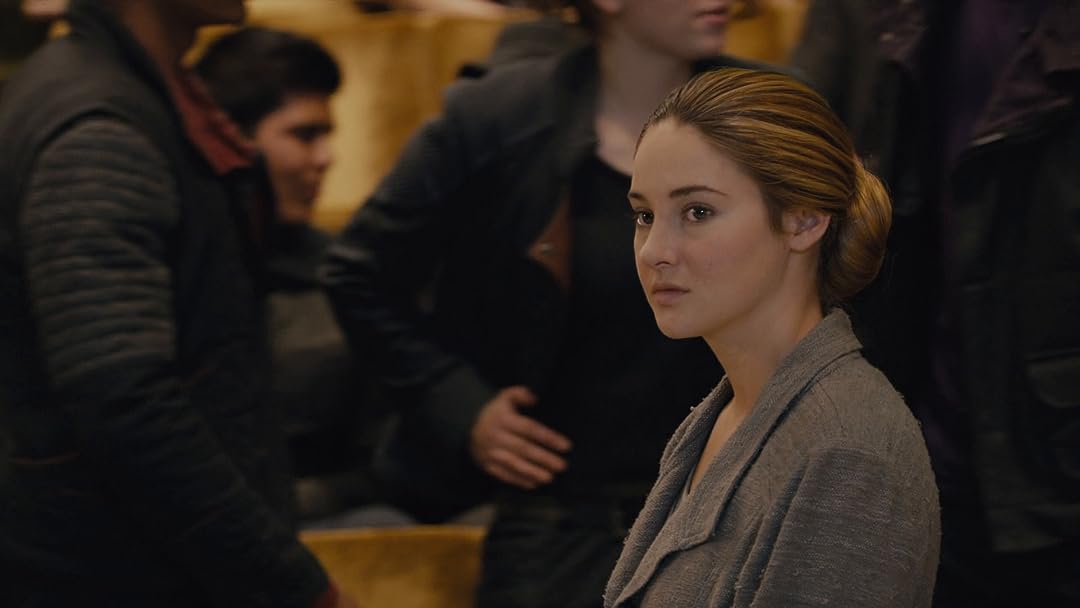 Leaves AMC + in 8 daysRentals include 30 days to start watching this video and 48 hours to finish once started.

S.Reviewed in the United States on August 1, 2020
5.0 out of 5 stars
Great social commentary
Verified purchase
This movie is so relevant to our current situation in the US. I really identified with the main character, because seeing all of the censorship even of sustainable gardeners/farmers, spiritual healers, MDs with a differing opinion based on their experience has really made it clear that the big tech companies (including social media) and our cancel culture have made free thinkers rare online at this point. What will you do when your view is the "dangerous divergent" one? Will you still approve of censorship when it comes to your industry and you try to fight for what you believe is right only to be met with malice and rejection?
46 people found this helpful

MarciaBReviewed in the United States on December 7, 2017
5.0 out of 5 stars
Awesome Movie! Action packed with a just enough Romance!
Verified purchase
Awesome Movie! One of my favorites! If you like sequels then this is definitely for you! This is the first of 3 movies that are currently available to watch. The 2 main characters have a awesome chemistry and a building relationship onscreen. It’s romantic in ways for the hopeless romantics, but jammed packed with action for those who favor that type of movie. Great Cast, Love
Ashley Judd and Kate Winslet as Suppoorting actors! If anyone has any questions about this film please feel free to ask me! I’ve watched it a million times and still Love it! Definitely a Great Movie!
23 people found this helpful

joe rReviewed in the United States on December 24, 2019
2.0 out of 5 stars
Turning pretty children into murderers = butts in the seats
Verified purchase
Ya know... Like Hunger Games! Made a ton of money!
And it seems like that's the only reason they made this movie. Everything seems rushed. Like they forgot to tell a story or develop the characters. Like the concept was all they needed. Famous actors, whose whole 'motivation' was "Make a movie."
Tried to watch it again, just to see if I was having a bad movie night or something, but it didn't get any better the second time around. Made it halfway. I actually paid to see this, and that's embarrassing. Won't be paying for the rest. Maybe if I thought they'd all die before it was over.... But I doubt if I'd be that lucky

SunnyReviewed in the United States on January 3, 2021
4.0 out of 5 stars
Spoiler!! But Pretty Good Movie
Verified purchase
By : Audrey
The movie I will be reviewing is Divergent. It is based on the books by Veronica Roth. It is the first of three movies. It’s set in a future dystopian world. There is one city, Chicago, that is safe in the world and it is surrounded by a wall that no one can leave. The city is run by a system with five factions: Abnegation the selfless, Erudite the intelligent, Dauntless the brave, Candor the honest, and amity the peaceful.

Beatrice, or Tris, is a girl from Abnegation. She takes a test and is told that she is divergent, which means she fits into more than one faction and is illegal. Tris decides to go into Dauntless. At the training facility she meets Four and is told that there are two levels of training, physical and mental, and she will become factionless if she doesn’t pass the first level. She is not doing well and is failing at the physical part of things. Then at a game of capture the flags she proves herself and is accepted by the other dauntless. Tris barely passes the first level and moves on to the second, which is focused on the mental side. She faces some of her fears and beats them by telling herself that they aren’t real, which is unnatural and is noticed by Four, who decides to help her. He teaches her how to do things the dauntless way and she passes the final test. The next day Tris finds that all the other Dauntless are under mind control, but she isn’t affected. Tris and Four beat the people controlling Dauntless, then escape to the wall.

To start off the bad stuff this movie has a really fast pace, which makes the story hard to follow. Tris is a really developed character while everyone else is just you know the basic outline and that’s it. The entire villain plot is illogical. They could have just given divergents their own faction and problem solved. The ending leaves you hanging and you have to watch the next. Most movies give you closure so you don’t have to watch the next with the way the story is going.

Don’t get me wrong I really liked this movie. The story is interesting and keeps you involved. The character balance of good and bad is perfect and neither seems overwhelming. Tris seems like an excellent role model. There is romantic tension, but the romance itself is kept to a minimum. And the violence is definitely there, I mean this is the warrior group, but it keeps you on your toes and every moment is more suspenseful than the last, leading to the grand finale.

Divergent was an excellent movie. The story is interactive and very realistic, especially with the futuristic setting. This movie, like the Maze Runner, does a good job of blending present and future. The city is amazing with the buildings and how some of them are destroyed. The movie’s setup is perfect for a continuation. The language is pretty limited. I would recommend this movie for 12 and up, although some might feel more strongly about the violence. I would rate this movie four stars.(No pun intended)

QuinnReviewed in the United States on September 14, 2020
1.0 out of 5 stars
Mostly boring
Verified purchase
You're better off watching its parody trailer.

Dislikes:
- The first 2hr of the movie was mostly people talking... not much substance or meaning to the movie like in Inception or Harry Potter. It's more about feelings. So like the Honest Trailer admitted, the film's more for the emotional teenage girl.
- A lot didn't make sense, like all the police faction do is run around the streets climbing buildings and laughing...
- The fate of the father was kinda dumb: just cuz you're a side character who's about to do something brave to help the main character doesn't [SPOILER WARNING: mean you have to die. He totally didn't have to expose himself and flat out die in order to gun down those bad guys.]
- I had to skip some scenes whenever a scene became boring and superfluously talkative (like people using 30 words or mins to express what could've been done in 10 words or mins).

Likes:
- It was cool to see the mom take initiative ( when the daughter needed help).
- It was briefly funny a few times to laugh at some of the ridiculous moments.
4 people found this helpful

BonnieBReviewed in the United States on March 27, 2017
4.0 out of 5 stars
Far better than the sequels
Verified purchase
This is the only Divergent series film really worth watching more than once. The other films in the series you will watch just to see what happens. But the original Divergent has some real meat to it.
28 people found this helpful

joel wingReviewed in the United States on February 25, 2021
3.0 out of 5 stars
Doesn't follow usual tropes for teen/20 something sci-fi flick
Verified purchase
Divergent was another post-apocalyptic story aimed at young people. It takes place in a world where the survivors of a war have created a caste system to control the population. There are the intelligent people who create, the workers who produce, the orderly are the bureaucrats, the brave are security, and the empathetic are the rulers. The main character Shailene Woodley doesn’t know which group she belongs to. That’s why she’s a divergent.

The movie seems like it will be pretty routine at first but then doesn’t follow the common tropes. For instance, Woodley meets a leader in the security forces Theo James but it doesn’t immediately become a full fledged love story. Instead most of the first half of the film focuses upon Woodley trying to prove herself through a trial by combat training program to join the security caste called the Dauntless. The second half is about a caste attempting to seize power. That makes it a step above your usual sci fi film for teens and 20 somethings.
2 people found this helpful

sefriendlyguyReviewed in the United States on July 15, 2017
5.0 out of 5 stars
won the war, but , have not made the battle yet!
Verified purchase
Divergent is the first of three , the first one is about a couple of kids that to decide on
how there lives are to be in the future,by taking a test and the results will let them know
what side there on and with this , they will have ti leave there family
Divergent is the best of the best and if your test result shows this, most likely
you will be killed, this part of the movie is focused on the test itself
trish(shalene woadley)- passes her test and gets her buttt kicked,
and is saved by one of the leaders and she manages to fight the final fight in this series
against the leader of the whole world, played kate winslett, it will make you cringe and you could say, love was found,
this movie is good and if you ever watched HUNGER GAMES, this will put your mind in the same place, there was more than one part of that series as well, if you liked it, you will love this one!!
10 people found this helpful
See all reviews
Back to top
Get to Know Us
Make Money with Us
Amazon Payment Products
Let Us Help You
EnglishChoose a language for shopping. United StatesChoose a country/region for shopping.
© 1996-2022, Amazon.com, Inc. or its affiliates