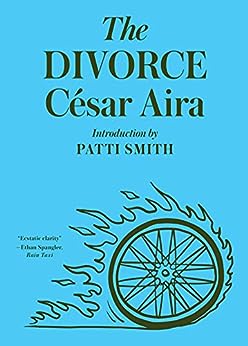 With a preface by the irrepressible Patti Smith, The Divorce is a delightful book of several short amazing stories of chance meetings, bizarre circumstances, and even stranger visions of alternate realities written as only César Aira can

The Divorce tells about a man who takes a vacation from Providence, R.I. in early December to avoid conflicts with his newly divorced wife and small daughter. He travels to Buenos Aires and there, one afternoon, he encounters a series of the most magical coincidences. While sitting at an outdoor café, absorbed in conversation with a talented video artist, a young man with a bicycle is thoroughly drenched by a downpour of water seemingly from rain caught the night before in the overhead awning. The video artist knows the cyclist, who knew a mad hermetic sculptor, whose family used to take the Hindu God Krishna for walks in the neighborhood. More meetings, more whimsical and clever stories continue to weave reality with the absurd until the final, brilliant, wonderful, cataclysmic ending.
Read more
Previous page
Next page

"Reading El divorcio is like witnessing an explosion, or the birth of an alphabet."
― David Kurnick, Public Books

"Aira is unencumbered. He does what he does, and what we receive is giddy, unquestionably self-indulgent, and yet absolutely perfect."
― Kamil Ahsan, NPR

"Sui generis is really the only way to accurately describe César Aira. He’s by turns a realist, a magical realist and a surrealist ― and therefore not really any of them. Anything can happen in an Aira novel, and almost everything does."
― Tyler Malone, Los Angeles Times --This text refers to an alternate kindle_edition edition.

Nominated for a Neustadt award and the Man Booker International Prize, César Aira was born in Coronel Pringles, Argentina, in 1949. He has published at least one hundred books and recently created a limited edition, “Valise,” for the Museum of Modern Art, NYC.

The poet Chris Andrews teaches at the University of Western Sydney, Australia, where he is a member of the Writing and Society Research Centre. He has translated books by Roberto Bolano and César Aira for New Directions. He has won the Anthony Hecht Poetry Prize for his poetry and the Valle-Inclan Prize for his translations.

Patti Smith is a poet, performer, visual artist, and author of the National Book Award-winning memoir Just Kids. She has twelve albums, has had numerous gallery shows, and continues to give concerts of her music and poetry. Her books include Early Work, The Coral Sea,Witt, Babel, Auguries of Innocence, Woolgathering, Land 250, Trois, and many others. She lives in New York. --This text refers to an alternate kindle_edition edition.

C&eacute;sar Aira was born in Coronel Pringles, Argentina in 1949, and has lived in Buenos Aires since 1967. He taught at the University of Buenos Aires (about Copi and Rimbaud) and at the University of Rosario (Constructivism and Mallarm&eacute;), and has translated and edited books from France, England, Italy, Brazil, Spain, Mexico, and Venezuela.

Perhaps one of the most prolific writers in Argentina, and certainly one of the most talked about in Latin America, Aira has published more than eighty books to date in Argentina, Mexico, Colombia, Venezuela, Chile, and Spain, which have been translated for France, Great Britain, Italy, Brazil, Portugal, Greece, Austria, Romania, Russia, and now the United States.

One novel, La prueba, has been made into a feature film, and How I Became a Nun was chosen as one of Argentina’s ten best books. Besides essays and novels Aira writes regularly for the Spanish newspaper El Pa&iacute;s. In 1996 he received a Guggenheim scholarship, in 2002 he was shortlisted for the R&oacute;mulo Gallegos prize, and has been shortlisted for the Man Booker International Prize.

4.3 out of 5 stars
4.3 out of 5
47 global ratings
How are ratings calculated?
To calculate the overall star rating and percentage breakdown by star, we don’t use a simple average. Instead, our system considers things like how recent a review is and if the reviewer bought the item on Amazon. It also analyzes reviews to verify trustworthiness.
Top reviews

Jeffrey Harkness
4.0 out of 5 stars Quirky story
Reviewed in the United States on October 11, 2021
Verified Purchase
Fun and interesting read that ebbs and flows in its ability to paint a bizarre picture of a fantasy life
Read more
Helpful
Report abuse

Sayed Azizi
5.0 out of 5 stars A fantastic tale
Reviewed in the United States on August 4, 2021
Verified Purchase
A gripping magical realism of high caliber. Too bad it was so short. The could have been tied more neatly, but that is also the charm of the book.
Read more
Helpful
Report abuse

W.P. Osborn
5.0 out of 5 stars Beautifully written. Well translated. Knockout ending
Reviewed in the United States on June 29, 2021
You can think of this work as a paean to the main postmodernists of especially Argentina, but touching on Columbia too. The signal elements of postmodern writing are all here, especially the labyrinth (the building on fire from which one of the main characters is trying to escape, for instance), the mirror (the miniature flaming model of that building into and from which this character tries to escape), and the library (a corporation’s universal manual of operations). The story’s narrator has come to a particular neighborhood in Buenos Aires in order to get away from his divorce in Providence Rhode Island. The neighborhood is the very one Jorge Luis Borges used to live in. The present action takes place outside a café in that neighborhood and lasts for a period of seconds. The working through of the labyrinth and the mirrors in the characters’ pasts (including the fire and a love story) comprises the bulk of a story that leads to a fabulist-mystical-magical spatiotemporal coincidental ending that gave me goosebumps to read. This book returned me to some of the reading I was doing in the 1980s (Borges, Marquez, Calvino, et al.) and added a 21st-century spin. If you are at all postmodern in your tastes, or if you need a brief intro to this kind of writing, you might want to try this quick and quirkish novelette. I really liked it.
Read more
6 people found this helpful
Helpful
Report abuse

Stephen T. Hopkins
4.0 out of 5 stars Imagination
Reviewed in the United States on November 16, 2021
If I were forced to place César Aira’s book titled, The Divorce, into a category, I would create a new one for this author’s imagination and skill: post-magic realism. Within the course of a few pages, we move from one coincidence to another. We think we can separate imagination from reality, and then realize we can’t. When we’re sure we are hearing a mundane story, something magical seeps in. Aira moves readers along as fast as we can read, taking us tighter and tighter into his imagination. This book is short enough to read a second time for a different take, but trust me, multiple readings may not lead to greater understanding, just more questions.

Rating: Four-star (I like it)
Read more
Helpful
Report abuse
See all reviews