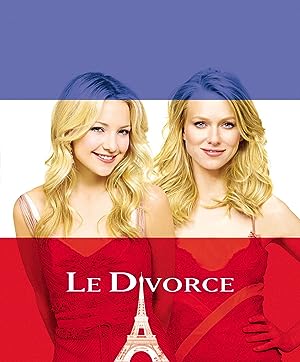 (520)
4.91 h 57 min2003X-RayPG-13
Based on the 1997 National Book Award-nominated novel of the same name by Diane Johnson (co-writer of the script for Stanley Kubrick's The Shining), Le Divorce is a romantic comedy from director James Ivory. Revisiting the "Americans in France" theme that Ivory explored in 1998's A Soldier's Daughter Never Cries, the film stars Kate Hudson as Isabel Walker.

MC PhillipsReviewed in the United States on April 19, 2016
4.0 out of 5 stars
I really enjoyed this movie
Verified purchase
I really enjoyed this movie, although it's difficult to place it firmly in one film genre - it is at once a drama, comedy, tragedy and farce. The star power is pretty high (Kate Hudson & Naomi Watts are both still early in their careers here, but Stockard Channing, Glen Close & Matthew Modine were well-established). If you can resign yourself to just follow along and accept the frequent and often abrupt changes in tone (you go from lighthearted scenes to rather more serious ones, and vice versa, throughout the film), you'll probably enjoy it. There are a lot of "French" clichés to ignore, as well, but since they are the catalyst for much of the action in the story, you have to swallow them (older French man seducing young, naïve American woman; French women disparaging American women over cultural differences; French husband leaving one [American] wife because he fell in love with another [Russian] woman and he's "helpless" to fight his feelings [and the woman he loves is married, too - it's one big spouse swap]). The basic gist of the movie is that Naomi Watts' French husband leaves her while she is pregnant with their second child; Kate Hudson is her sister visiting from America and she arrives just as the husband is leaving. The movie loosely follows the divorce proceedings (hence the title), but there are a great many subplots (a painting "maybe" painted by Georges de La Tour owned by the Americans and claimed by the French husband's family as marital property; Kate Hudson's affair with the husband's much-older uncle; a romance between Naomi Watts & her divorce attorney; the husband's family & their many amusing quirks [due to being French, of course]; the drama with regard to who has rights to the painting, the husband's girlfriend's American husband going crazy over their affair...) - I don't want to give away too much, but you'll definitely be hopping, attention-wise throughout the film. A classic? No. Worth a rental for a light evening's entertainment? Sure.
5 people found this helpful

GryphonisleReviewed in the United States on December 29, 2012
3.0 out of 5 stars
Stylish Romantic Comedy, Set In Paris.
Verified purchase
As one would expect from anything associated with the Merchant Ivory team (or part of it), this film is beautiful to watch. It's not "A Room With A View" by a long shot, but it's a very polished entry in the Romantic Comedy genre. Kate Hudson plays the younger sister to Naomi Watts, an American married to a Frenchman, living in Paris. She arrives just as hubbie is departing, for good. Oddly enough, Kate looks best (that is to say, stylish and Parisian) when she arrives, as later in the film she adopts a sort of society dame helmet hair pageboy that makes her look ridiculous, as opposed to anything else.

In any case, what is billed as an observation of cultural differences is really more of a long-stare at Parisian style as Americans see it. The American family of the two sisters, who come over to offer support during the divorce process, is nice enough---very informal, not one to stand on tradition--at least not on purpose---and the brother, representing the Red States, is obsessed with the value of a family owned painting that the older sister took to Paris, and which has now become a source of enmity within the divorce, and the attention of major museums.

Well of course, being French, the conservative in question is dirty old Uncle Thierry, an elegant womanizer who is tolerated by his wife and never exposed by the press. Oh the French, even their conservatives have fun! Sadly, he buys every one of his girls a red Grace Kelly bag from Hermes, and the dopey new American girl carries it everywhere, even when informed about its significance.

One of the movie's extended cameos is Glenn Close who plays a professor for whom Kate's character ends up working, and as it turns out, one of Uncle Thierry's former Kelly Bag recipients.

Of course, there's still the question of Le Divorce, which sort of hangs over the film---not in any menacing way, it keeps things moving when the production team forgets what the movie is about. So, as it turns out, the french hubby has a mistress too (it runs in the family) but she also has a boy friend, or is she married too? I forget. Well, needless to say the boyfriend is an American, which means he's crazy and he's got a gun...

It might be Merchant Ivory, but no one said we were dealing with high culture here. At least this one has french people in it---unlike Woody Allen's film which featured Paris in three eras with practically no french people in any one of them.

Most of the movie takes place indoors so you really don't see much of Paris, although there is a nice vignette expounding on french women and their scarves.

It's a romantic comedy. If you like the genre, you'll probably like this film. If you're coming from Merchant Ivory, you may not. Or maybe you will. It's entertaining. I've seen much worse.

AAReviewed in the United States on November 17, 2020
2.0 out of 5 stars
Not at all the fun romp the trailer makes it out as
Verified purchase
The trailer for this film is very deceptive, in that it makes. You think you’re signing up for some charming, humorous movie about 2 American sisters, set in France. It’s not humorous or charming. At all. I don’t know how to describe it, but it just made me feel kinda ick, so I didn’t bother finishing it.
One person found this helpful

ChrisReviewed in the United States on March 14, 2017
4.0 out of 5 stars
A different kind of Merchant/Ivory film
Verified purchase
I found this movie delightful for many reasons. The cast is a mix of American and French actors who must deal with the cultural clash between their very different points of view. The story has some improbable plot twists, sometimes bordering on fantasy, and the ending may seem contrived or deus ex machina. For me, that was just a part of the overall charm. Paris and the French countryside are very much characters in the movie. Anyone who lives Paris will find at least something to love. This is a very different kind of movie for Merchant/Ivory.
3 people found this helpful

Sandra BockReviewed in the United States on January 4, 2019
1.0 out of 5 stars
Le Annoying!
Verified purchase
I don't give many reviews on movies. To each his own but this one is really annoying. A few snappy come backs and laughs but overall the story line is bad. You really want to feel bad for the dumb wife but you just can't. Sister is a mess and oh my... if your bored and want to spend money on a bad movie this is the one for ya. My sister insisted we rent it. Her daughter and I both wished we hadn't. LOL
3 people found this helpful

Movies R UsReviewed in the United States on July 26, 2021
3.0 out of 5 stars
ROMP & CIRCUMSTANCE IN FRANCE
Verified purchase
GREAT CAST, ACTING. CULTURALLY INTERESTING. THE SCRIPT ASKED THE QUESTION:
WHAT IS THE LAST THING YOU WANT TO BE?

Claire PoirotReviewed in the United States on January 28, 2021
5.0 out of 5 stars
Beautiful Film
Verified purchase
This is not a romantic comedy. It was advertised as such, and was therefore received poorly. This is a film about love, loss, maturing, and French culture. It’s a drama, it’s beautiful, and you should watch it.

Valerie HughesReviewed in the United States on September 15, 2021
5.0 out of 5 stars
Chick flick romcom
Verified purchase
My secret vice. I fell in love with the sweaters. The acting is good. The story line is improbable, but I didn't expect a documentary. It's a fun escape to Paris. It's mildly naughty and it has Hermes.
See all reviews
Back to top
Get to Know Us
Make Money with Us
Amazon Payment Products
Let Us Help You
EnglishChoose a language for shopping. United StatesChoose a country/region for shopping.
© 1996-2022, Amazon.com, Inc. or its affiliates