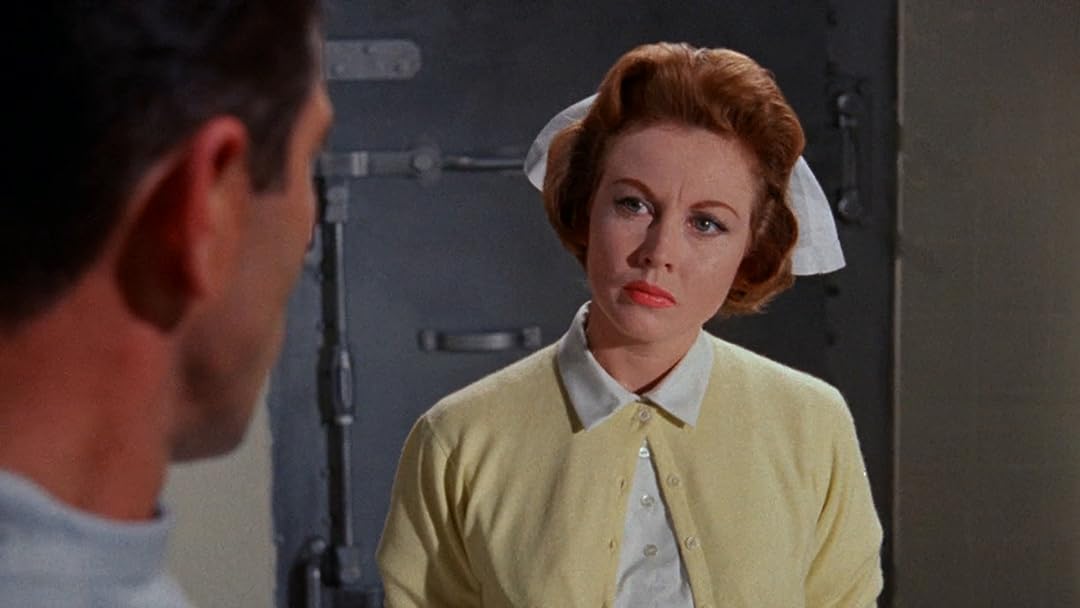 (67)4.91 h 31 min196113+
There is horror in a small Cornish village when a disbarred doctor starts performing grafting experiments on the unfortunate and terrified villagers.

Linda LeeReviewed in the United States on April 17, 2021
3.0 out of 5 stars
A British horror B movie
Verified purchase
I'm glad this movie had CC because the audio was very poor.
This is a type of evil doctor who has had grandiose dreams of bringing people back to life since he was a little boy playing alone in the local mine tunnels.
He believes everyone in the medical field denies him the opportunity to carry out his experiments and to become famous
This doctor turns "worthless people" into zombies if and when no one interferes.
He becomes jealous of the beautiful widow's husband who has been dead for about a year.
Let's say she doesn't appreciate and applaud his experiments and vainglorious goals.
The dude is definitely deranged and progressively viciously insane as the story goes from bad to worse.
Not much is left to the imagination. There is violence, blood, and gore.
I read other reviews. This horror flick was very popular.

EinsatzReviewed in the United States on March 13, 2020
4.0 out of 5 stars
“Don’t worry George, the doctor is here now.”
Verified purchase
A very BAD faceless doctor is shown the door. A very BAD faceless doctor is shown stealing medical supplies. A really BAD faceless doctor is kidnapping “worthless” people to use for body parts…which raises the question, why hide his face? The movie is called ‘Doctor Blood’s Coffin’ for a reason, it involves a doctor and since there are only two Doctor Blood(s) on hand, it has to be one of them, so why be coy about it. Otherwise, it’s a decent melodrama. Considering the number of men the BAD doctor was killing, at some point he was going to need a bigger coffin. You just can’t leave corpses lying around, it isn’t sanitary.
2 people found this helpful

RafikNYReviewed in the United States on June 28, 2020
4.0 out of 5 stars
Not for Latrophobics!
Verified purchase
Excellent film! Evil scientist / 'Doctor Peter Blood' played by Kieron Moore comes home to share in the family medical practice but wreaks havoc on the town with his attempts at performing diabolical grafting experiments. Hazel Court plays the widowed nurse Linda who falls in love with the mad doctor. All while the good father played by Ian Hunter( Dr. Robert Blood) has to leave town, all hell breaks loose! Filmed on location on the beautiful English coast plus the classic 60s horror film score makes this film a real treat!
2 people found this helpful

D. KovacsReviewed in the United States on July 21, 2018
4.0 out of 5 stars
Ok, so it's NOT Hammer -- but love it!
Verified purchase
This is more of a mystery, not horror, set on the gorgeous Cornish coast. Been watching Poldark with my wife, and I swear I recognized some of the same scenery in this flick! As a thriller, it may not be too thrillng, but I loved the look of it. Plus it's theologically correct! If you enjoy vintage Brit flicks, then this is one for you.
8 people found this helpful

Kindle CustomerReviewed in the United States on July 19, 2021
4.0 out of 5 stars
Frankenstein Redux
Verified purchase
Same basic concept as Frankenstein -- young doctor in Cornish village does a heart transplant. Mostly the story is about sourcing the hearts to be transplanted. Actually the story and acting are not bad. Not worth going to much effort to watch, but a reasonable diversion if you stumble across it. Audio and video were about 1/2-1 second out of sync in the version I watched. This was a minor distraction.
One person found this helpful

Chip KaufmannReviewed in the United States on November 8, 2013
4.0 out of 5 stars
Another Childhood Favorite.
Verified purchase
Back in my formative years, one of my local TV stations (out of 3) had a penchant for British horror movies and ran them all the time. In addition to Hammer & Amicus, the two largest companies, there were a number of others who tried their hand at making horror pictures. There was Anglo-Amalgamated (CIRCUS OF HORRORS, HORRORS OF THE BLACK MUSEUM, PEEPING TOM), Baker & Berman (BLOOD OF THE VAMPIRE, FLESH & THE FIENDS, JACK THE RIPPER), and later on Tigon (BLOOD ON SATAN'S CLAW, CURSE OF THE CRIMSON ALTAR, WITCHFINDER GENERAL). There were also a number of smaller companies who made a couple of titles and one of those companies, Caralan, made two films back to back in 1961. One was THE SNAKE WOMAN (an interesting failure), the other was DR BLOOD'S COFFIN which turned into another childhood favorite.

There were a number of reasons for this, the chief reason was that it starred Kieron Moore who I had just seen on the big screen as the heavy in one of my favorite Disney movies, DARBY O'GILL & THE LITTLE PEOPLE and as a lighthouse keeper in THE DAY OF THE TRIFFIDS, a seminal viewing experience which cemented my preference for Brit movies (years later I would see Moore as Vronsky with Vivien Leigh in my favorite version of ANNA KARENINA). Another was that, even as a child, I preferred the straight-faced approach typical of British horror films in a modern setting as opposed to the quick, in-your-face style of American B movies. This understated approach to the highly dubious scenario in DR BLOOD'S COFFIN made it believable and once you buy into it, then the circumstances that occur and the gruesome finale take on really horrific overtones.

In brief, a Cornwall native is thrown out of medical school in Vienna for his radical ideas on heart transplants (remember this is 1961) and he returns to his hometown. The native, Dr Peter Blood (Moore), is a personable young man whose father is the local town doctor. In his employ as a nurse is a pretty young widow (Hazel Court) who takes a liking to Peter. Soon local townspeople start disappearing and strange goings on are happening in the nearby abandoned tin mines. Dr Blood is now ready for his grand scheme, bringing the dead back to life through heart transplants starting with Court's husband. I know it's an absurd premise but with that willing suspension of disbelief so necessary for horror movies, it works. This DVD-R, which utilizes a beautiful, proper ratio print, easily bests any other version out there so make sure to look for the MGM Limited Edition.
11 people found this helpful

Celia TrimboliReviewed in the United States on June 1, 2014
5.0 out of 5 stars
Doctor Blood's Coffin (MGM Limited Edition Collection)
Verified purchase
Pretty good early 60's British horror film. A medical student (or resident, I'm not sure) is kicked out of the hospital where he is practicing for unethical medical experiments. He goes back to the seaside small town where his dad is the country doctor and pretty soon villagers start disappearing. The mad med student sets up his experimental lab in the abandoned mines under the village and takes his lab humans there. What's awful is that he operates on the victims while they are still alive and aware. He paralyzes them with curare but that's small comfort. He sort of falls for his dad's practice nurse and when she rejects him he brings her dead hubby, who's been gone three years, back to life for her. Naturally she wants nothing to do with her crusty, moldy spouse. That's when everything hits the fan. Nicely filmed at a beautiful seaside area (not sure where) in England. The quality of the MGM Limited Edition is great and probably as good as it will ever get. Recommended for British horror film fans.
11 people found this helpful

Midnight HourReviewed in the United States on November 11, 2014
5.0 out of 5 stars
Good
Verified purchase
A good old fashinon horror movie only this time in color. It is a short movie as movies go, but the action is ongoing throughtout the movie. It has a good plot with good acting. The movie has been remastered therefore the picture and sound is very good. Not a lot of gore and blood which is good. This is the old school type movie where you get to use your mind and stay on the edge of your seat wondering what the outcome is to be. You will have a lot of information to process. A lot of fine looking older British cars to look at also. Not a bad horror movie for the 60s when the gore and blood had become the thing of which horror movies were made and I am sad to say remains the same today. A good horror movie should have as much mystery as possible and this one is full of well placed mystery. I'll take the mystery over the blood and gore every time.
9 people found this helpful
See all reviews
Back to top
Get to Know Us
Make Money with Us
Amazon Payment Products
Let Us Help You
EnglishChoose a language for shopping. United StatesChoose a country/region for shopping.
© 1996-2021, Amazon.com, Inc. or its affiliates