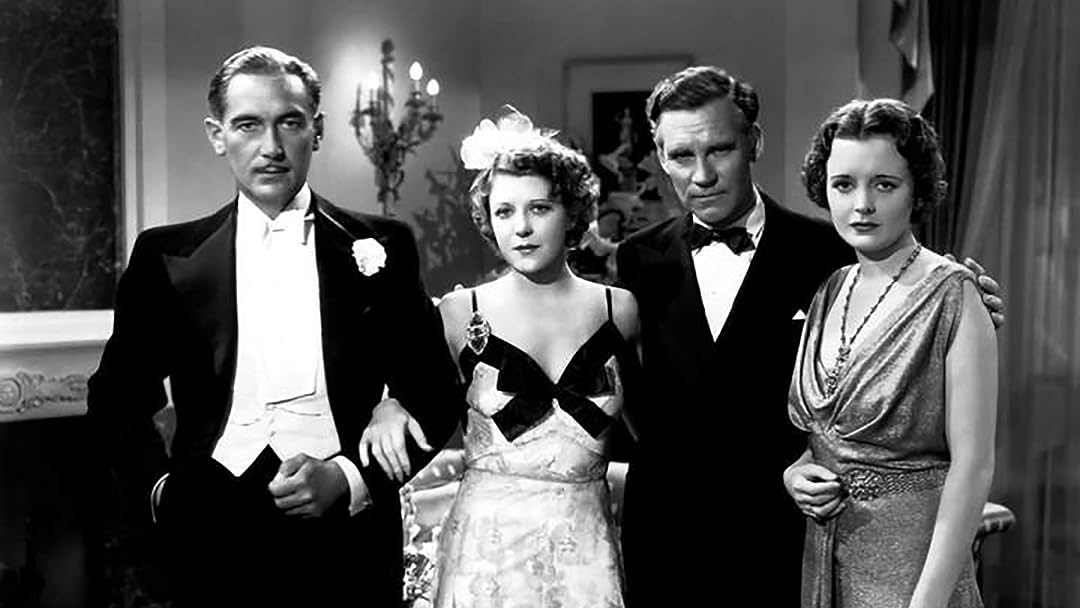 (388)
7.81 h 41 min193613+
A retired auto manufacturer and his wife take a long-planned European vacation only to find that they want very different things from life.

EricReviewed in the United States on March 29, 2020
5.0 out of 5 stars
An outstanding film gets an equally outstanding restoration on Blu-ray
Verified purchase
Bravo to all the entities that joined forces to restore this William Wyler masterwork, which doesn’t lose an iota of its excellence after 84 years. What had been lost are all the ravages of damage that plagued every viewing of this film in my life (on TV and DVD), and what we have is a thing of visual and aural beauty. A very mature and realistic slice of life from 1936 that holds up in 2020. The motion picture Academy and the Film Foundation are to be congratulated for preserving and restoring DODSWORTH. The Blu-Ray is outstanding, with a perfect presentation and a bonus radio adaptation added as a nice bonus.
38 people found this helpful

Marina E. MichaelsReviewed in the United States on May 9, 2020
5.0 out of 5 stars
One of David Mamet's perfect films
Verified purchase
I watched this because a friend recommended it. She said David Mamet named Dodsworth as one of four perfect films. (The other three are The Godfather, A Place in the Sun, and Galaxy Quest. The man has taste and insight.)

I've seen three of the four, counting Dodsworth. It may sound odd, but I can see resemblances between Dodsworth and Galaxy Quest. Both movies keep you guessing the first time through, and both show the main male character maturing through the course of the movie. I'm not going to give any spoilers, though I will say Dodsworth and Galaxy Quest are both comedies in the classical sense (whereas Godfather is a tragedy, also in the classical sense.) I enjoyed Dodsworth, and Galaxy Quest is one of my all-time favorite movies. I've lost track of how many times I've watched it since it came out.

Dodsworth reflects the attitudes of the time toward mens' and womens' roles--my friend and I commented on that as we watched it--but the story and the characters/characterization are timeless. Any observer of human nature could name people in their lives who are like the characters in this movie.

This version of Dodsworth has been restored and the restoration was done well.

Edit/update: I recently read Mamet's Bambi vs Godzilla (awesome book; I highly recommend it). He doesn't say there are *only* four perfect films; he just discusses the four I listed above in one essay. In his other essays, he calls other films "perfect": Hail the Conquering Hero (1944), The Lady Eve (1941), and a few others I don't recall.

JTPReviewed in the United States on June 29, 2020
5.0 out of 5 stars
A SAMUEL GOLDWYN CLASSIC RESTORED
Verified purchase
This review is for the WarnerArchive 2020 blu ray release of Dodsworh.

Dodsworth was originally a 1929 novel by Sinclair Lewis then became a 1934 play by Sidney Howard. Howard also wrote the screenplay for Samuel Goldwyn’s 1936 film, directed by William Wyler.

Goldwyn was one of the major independent producers of that time. Unlike the major studios that produced thirty to forty films per year, Goldwyn produced a smaller number of productions each year. Dodsworth was third of five Goldwyn films that year.

The movie is an adult drama starring Walter Huston as a retired automobile magnet, Ruth Chatterton as his disaffected wife and Mary Astor, a self confident divorcee.

The film holds up well as an example of Goldwyn’s lavish attention to detail while maintaining the quality of the human drama. Some may find it a bit old fashioned but aficionados of classic films will enjoy it. Playwright David Mamet counts it as one of his favorite films.

The new blu ray from Warner Archive is a 2019 restoration but there is one troubling aspect and it occurs during the opening credits. As the credits roll, there are pictures of various vintage cars pictured in the background. There is a smooth transition from one credit sequence to the next. However sometime in the 1950s the film changed distributors from United Artists to Film Classics. There is a jarring jump cut on the last transition to show that and it spoils the elegance of the credit sequence. This problem was on the earlier VHS tape and DVD releases. Since they they were taking the time and effort to restore the film it’s a shame they couldn’t have fixed this. It would have been relatively easy to do.

But the rest of the film looks great and still comes highly recommended.
8 people found this helpful

The Dead WomanReviewed in the United States on May 13, 2021
5.0 out of 5 stars
The American Narcissist Revealed
Verified purchase
It's possible that at the time this film was made, women such as the wife of Walter Huston's character were an aberration. Such is no longer the case: now, at least in America, such selfish beasts are more the norm than they are the exception. Every American male, no matter of what age, should see this well-executed adaptation of the Sinclair Lewis book before he wastes another dollar or minute of his time with such a female. It's always thrilling to see the female Narcissistic animal get her comeuppance!
4 people found this helpful

haridamReviewed in the United States on May 26, 2018
5.0 out of 5 stars
Five Stars
Verified purchase
When is Dodsworth going to be given the restored Blu Ray treatment it deserves?
22 people found this helpful

rovertonReviewed in the United States on September 22, 2013
5.0 out of 5 stars
An under the radar classic from 1936
Verified purchase
Excellent transfer of an extremely intelligent re-working of the Sinclair Lewis novel, with great performances from Walter Huston, Ruth Chatterton, and Mary Astor. It's included in The National Film Registry for good reason. The characters are 3-dimensional, with complications and contradictions that are rare in Hollywood films. (It's a perfect example of why the Turner Movie Channel has been so successful.) Directed by William Wyler, released in 1936, it's about a middle-aged marriage that was held together by a type-A husband and, in a sense, his absence. When he realizes he has made a lot of money--as much as he needs--but hasn't seen enough of the world, he sets out for Europe with his wife. Unanticipated changes occur for both of them, leading to a very convincing portrait of a marriage that gets into trouble when both individuals are forced to spend a lot of time together, as well as the disorientation from the culture shock of adjusting to Europe and a different way of doing things. Both are forced to change their visions of what they want out of life and who they are. Beautifully paced and acted, with a fine adaptation of the novel, it's a classic Hollywood example of drama that avoids melodrama, that walks the line between engaging entertainment and artfully asking serious questions. It's a very fresh, original variation on the typical American-in-Europe narrative. And for me, the screen presence of Ruth Chatterton has been a revelation ever since first seeing "Female." She's great!
39 people found this helpful

MARC E KORMANReviewed in the United States on March 30, 2020
5.0 out of 5 stars
Excellent Film. Excellent BD.
Verified purchase
This is a wonderful drama about life. The acting and direction is excellent. The video and audio is excellent. This film held our interest from beginning to end. Five Stars.
8 people found this helpful
See all reviews
Back to top
Get to Know Us
Make Money with Us
Amazon Payment Products
Let Us Help You
EnglishChoose a language for shopping. United StatesChoose a country/region for shopping.
© 1996-2022, Amazon.com, Inc. or its affiliates