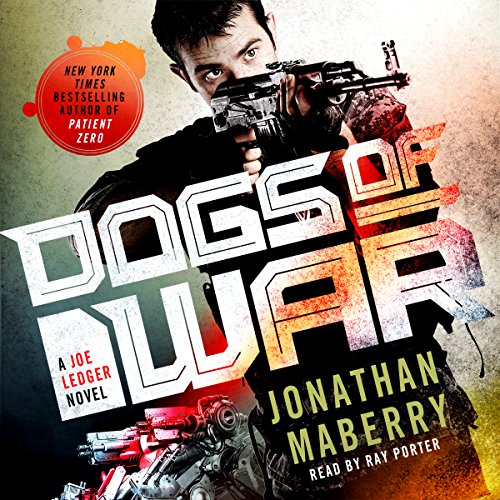 List Price: $40.59
You Save: $5.07 (12%)
By completing your purchase, you agree to Audible’s Conditions Of Use
Sold and delivered by Audible, an Amazon company
Share

4.7 out of 5 stars
4.7 out of 5
243 global ratings
How are ratings calculated?
To calculate the overall star rating and percentage breakdown by star, we don’t use a simple average. Instead, our system considers things like how recent a review is and if the reviewer bought the item on Amazon. It also analyzes reviews to verify trustworthiness.
Top reviews

Adam John Zimmerman
5.0 out of 5 stars Welcome back, Joe!
Reviewed in the United States on May 8, 2017
Verified Purchase
After the harrowing events of "Kill Switch," the Department of Military Sciences, Echo Team, and Joe Ledger were all in a bad place. At the start of this novel, they're dealing with the aftermath of that case on multiple levels.

That having been said, without giving details away, this book reconstructs Joe, Echo Team, and the DMS and sets them up for the future both on an in-universe and meta level. After the Lovecraftian weirdness of the previous book (which some readers felt deviated too far from the "reasonably hard science fiction" formula of previous books into something too far divorced into the realm of the quasi-supernatural), this novel does a good job of helping the series find its feet again and setting up how it could deal with strangeness in the future. Lots of good, well-rooted science, return retroactive appearances by some of the major underlying nasties of previous books (without overly relying on them; another complaint of previous novels like "Predator One"), and finally some semblance of movement toward understanding how one particular recurring villain may operate.

Ultimately at its core, it's a story about characters finding their strength and balance to stand and be heroes again. And if you're a loyalist of the series, the ending will make you smile and look forward to the future.
Read more
5 people found this helpful
Helpful
Report abuse

Tomasthanes
4.0 out of 5 stars Good Doggie, Bad Doggie
Reviewed in the United States on October 17, 2018
Verified Purchase
This is the 9th book in the Joe Ledger series. I don't know how much damage Joe, Top, and Bunny (and even Lydia Rose gets into the action) can absorb: GSWs, cuts by knife, and just the trauma of being in a fight against genuinely evil opponents. A new member of the team, Tracy Cole, is added. I rated this book 4 stars only because of sympathy for the suffering of the main characters (if that makes any sense at all).

The title refers to the mechanical dogomorphic robots developed by companies like Boston Dynamics even though they were only near the beginning and end of the book. I'm sure that the author did his research but it seems curious that robots developed by the military would have electrical cable bundles running between the head and torso that are so vulnerable. However, without those, how would any human survive and up close encounter with one of these (even though they didn't attack with "tooth and claw" but were mobile machine gun platforms).

This was the first Jonathan Maberry novel in which I found a wrong word (which I reported to Amazon). Typically his novels are superbly edited.

Because of the emotional trauma to the reader, I'm going to wait a bit before I read the 10th book in the series.
Read more
One person found this helpful
Helpful
Report abuse

TMStyles
VINE VOICE
3.0 out of 5 stars Ledger Faces Techno-Terrorists
Reviewed in the United States on July 4, 2017
Verified Purchase
"Dogs Of War" is Jonathan Maberry's latest installment of the Joe Ledger series. If you have read any of the series, you either love the characters and over-the-top action or you hate it. If you have never read any of the series, I encourage you to try it if you enjoy high action suspense with a heavy dose of the supernatural--all combined with some of the most vile, well conceived villains possible.

All the elements of the Ledger series are here in "Dogs of War" – a self doubting Ledger, an evil mastermind with a cock-a-mamie plan to destroy much of the world, advanced robotic dogs, drones and nano technology primed to deliver plagues into the modern world. It will take everything Ledger and his team, the Department of Military Sciences, and the enigmatic Mr. Church have to combat this new threat posed by figures from the past.

Once again Joe's warrior spirit combined with his natural instincts and refusal to lose help him lead his team in a battle for the future of the world. As usual, Maberry takes the evil scheme right to the edge of success before Ledger and the forces of good can begin to to make headway--and of course, the irrepressible "Ghost" is very much in the action for you dog lovers.

My only quibbles are minor yet reoccurring as the series continues to grow. The plot lines for the series are becoming somewhat redundant and the villains never seem to be totally destroyed--as I have lamented previously. Each new Ledger novel seemingly has a villain from the past or a villain's prodigy or a villain's child returning to continue the nefarious work for which they were groomed. Comic book writers learned long ago that a good villain was too valuable to eliminate and it seems Maberry also subscribes to this idea. However, I have read each of the Joe Ledger adventures so far and I will continue as, hopefully, Maberry branches into new waters with his superb cast of characters.
Read more
2 people found this helpful
Helpful
Report abuse

This one starts with young girl who's at the Imperial Hotel in Baltimore, Maryland. She's a prostitute and about to go crazy and kill two men. She will become the focal point of the investigation that Church and his DMS will begin.

Joe Ledger had just returned from a dirty little piece of business in San Antonio and was looking for a chance to relax. He and his MWD Ghost needed a little R&R. Junie, the love of his life, was in some remote Brazilian rain forest on a joint World Health Organization and a FreeTech venture intended to improve water purity.

Joe gets a call from his boss Mr. Church. He needs Joe on a plane to Prague. Violin will be accompanying him. Its a trip that will lead to one hell of a mission. A mission that will cost many lives.

So begins one damned fine read.

This one has Joe, Ghost, Bunny, Top, Church, Cole a new recruit to DMS, Zephyr Bains, a very rich woman with a vision for the future of the world, a vision that will cost billions of lives, John the Revelator, a man who is far more than he appears to be, Sean who is Joe's brother and a police detective in Baltimore, a kidnapped family, an Army Captain who runs the farm where the wardogs are tested, death, destruction and Joe Ledger doing his best to figure it all out, save his family, protect those he can and stay alive.

Kindle Customer
2.0 out of 5 stars Im losing interest
Reviewed in the United Kingdom on May 17, 2017
Verified Purchase
I like the Joe ledger character and the supporting cast since the first book.
I can also off the top of my head give you highlights of all the books up to extinction machine.
After that I couldn't tell you
This one and kill switch just don't cut it. Its more Joe brooding and barely any action which we know is a trademark of the ledger series
After extinction machine its like Jonathan Mayberry ran out of ideas. Zombies, genetic killing machines, aliens, illuminati type societies, vampires then one book with them all combined. Then it goes cold
And adding the names of other teams that deal with strange happenings that are creations of other authors feels like everyone is now copying the shared universe template created by marvel films.
Mr Mayberry is a great writer though I think I will be giving future Joe ledger novels a miss after this one
Read more
3 people found this helpful
Report abuse

christine jones
5.0 out of 5 stars Joe rock's!!
Reviewed in the United Kingdom on May 10, 2017
Verified Purchase
Had this on pre-order and then decided to save it for the hols but I couldn't . First rate fast paced and .......I finished !!! Long wait for the next !!!
If you 've not read this series ......you missing out .....Joe ledger should have a tv series at least (he s better then . Jack reacher)
Jonathan maberry - I sat up till I finished ...couldn't put it down
Read more
One person found this helpful
Report abuse

dipstar74
4.0 out of 5 stars More of the same
Reviewed in the United Kingdom on May 18, 2017
Verified Purchase
You know exactly what you are going to get in this series some intresting tech and violence.
This isnt the best in the series, for me thats still the original (patient zero).
Im a big fan of Mr Maberry and have all his books, they are always well written and exciting i would only recomend this book if like me you are a fan of the series.
Read more
One person found this helpful
Report abuse

Alex P
5.0 out of 5 stars Joe Ledger at his best !
Reviewed in the United Kingdom on April 28, 2017
Verified Purchase
If you've read any of the other Joe Ledger books and enjoyed them then you already know why you're looking at this one. If you haven't, what are you waiting for? Another brilliant Jon Maberry book with his usual good writing but beyond great storytelling. The only negative thing I can think of about this book is it's finished and now I have to wait for the next one.......
Read more
Report abuse

mr stephen marsh
5.0 out of 5 stars How is this not a movie??
Reviewed in the United Kingdom on June 3, 2017
Verified Purchase
The latest in the most entertaining series I have ever read. Once again Maberry delivers in spades. Violent, horrifying, exciting as hell. Books shouldn't be this fast, this dynamic, this loud. Huge, HUGE, fun.
Read more
Report abuse
See all reviews
Back to top
Get to Know Us
Make Money with Us
Amazon Payment Products
Let Us Help You
EnglishChoose a language for shopping. United StatesChoose a country/region for shopping.
© 1996-2021, Amazon.com, Inc. or its affiliates