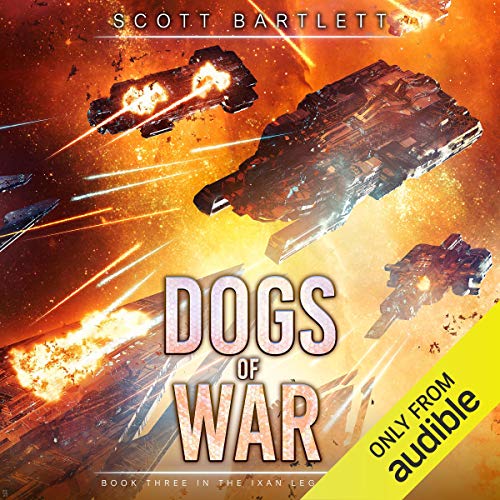 The invasion has begun....

The Progenitors are here, and Captain Husher knows the galaxy isn’t ready. He spent his entire military career preparing, but it wasn’t enough.

As the Interstellar Union continues to flail and colony after colony is consumed, Husher must make some impossible choices. About what to save. And what to let fall to the onslaught.

If he can’t find a way to oppose the Progenitors, they will sweep through the multiverse like fire through a parched forest.

It all comes down to this.

Kindle Customer
5.0 out of 5 stars More than a space opera
Reviewed in the United States on October 12, 2021
Verified Purchase
I mentioned this in my last review, but let me clarify. I think scott wrote this series to persuade us that we as a society and country (USA) are on the same path that the beings in this story are. We're really messed up in our thinking about and treating people of other political persuasions and races. We're killing our democracy and making it impossible to live with each other because more and more people are becoming intolerant, using the media and violence to scare each other to the point we are afraid to do anything about it. This could be the downfall of our culture, democracy, and economy. There's no excuse for us falling into this abyss. It's our own fault. If we don't change our ways, we are doomed. Read this and you'll see what I mean. Think on it and then do what you can to reverse the trends in progress that are destroying our society and our ability to live together. Rodney King nailed it: "Can't we all just get along"?!
Read more
Helpful
Report abuse

Bruce BTop Contributor: Photography
5.0 out of 5 stars Great ending to the trilogy as Husher does what only Husher can do - a must read
Reviewed in the United States on June 6, 2018
Verified Purchase
As a long time (and avid) reader of Scott Bartlett, I continue to be amazed at his ability to create new ‘realities’ in his books. Dogs of War is a great example of his ability to expand the norms of writing styles to new levels with his imagination guiding him to do what would typically be the impossible in a normal science fiction drama.

The ‘typical’ science fiction story-lines always rely on a primary “good guy” and a primary “bad guy” to keep the story centered on their actions and conflicts. But Scott manages to present a case where the same character exists in both roles, sort of.

First let me suggest that if you have not read the prior books in this trilogy, please read them first.
Capital Starship (Ixan Legacy Book 1)
Pride of the Fleet (Ixan Legacy Book 2)
Even if you are up to date, I suggest rereading the last several chapters of Pride of the Fleet to be prepared for the rapid-fire opening of Dogs of War! Within a few pages you will fully understand my comment about the good and bad guys being the same person, sort of…

So to summarize this book without revealing any spoilers, the galaxy remains in a war with an enemy they cannot match in technology and power, and barely hang on largely due to Husher’s brilliant tactics and insight into new technology created based on his asking key staff, and one very key civilian, to innovate specific things to counter the advantages of the Progenitor technology using tactics which are very effective with the new tech installed on some fighter ships. While this innovation started in Capital Starship and really got rolling in Pride of the Fleet, the new technology is key to turning the tide of the war and saving humanity, again.

Husher remains a hero to his crew and most of the fleet but is still out of favor with virtually all aspects of the civilian population, which is led by a president who only allows him to maintain command of the Vesta because he has to acknowledge without him they don’t stand a chance. There is naturally a lot of conflict between the civilian government, activists on board the Vesta, and Husher. He is stressed almost to the breaking point by the conflicts created by civilian officials who ‘technically’ have final authority to control his actions, and yet manages to continually work with (or around) those who would prefer to see him in jail or dead. There are just so many challenges to overcome in the war while being forced to ‘follow orders’ he knows are ill advised that he more or less goes rogue from time to time, but always ends up being right to follow his gut, with a few disastrous exceptions. In the end he is the hero of the people, but does not think of himself that way given the way he had to turn the tide to save humanity.

In the end the war is won, as it could only end that way, and while Scott has indicated this is the end of the various Ixan based books, I hope he changes his mind and starts a new series based on either the Ixa or other species or characters from the Dogs of War. But I know he has already started a new book series, which promises to be a departure from what most current science fiction writers are pursuing. I would not expect anything less from Scot than to rethink the genre and give us something fresh compared to the very common themes most authors are pursuing the past few years.

Note that while I get advance copies as one of Scott’s proofreaders, I always buy the books. I strongly suggest others who get ARC editions do the same since there WILL be differences in later revisions that you will only get if you buy the book!
Read more
2 people found this helpful
Helpful
Report abuse

SHEILA R BEITLER
5.0 out of 5 stars DOGS OF WAR
Reviewed in the United States on May 27, 2018
Verified Purchase
The writer graciously sent me an ARC of this book.

After the explosive ending of PRIDE OF THE FLEET, Bartlett doesn't miss a beat and takes us off running in DOGS OF WAR. Captain Husher has always found a way to keep the Progenitors at bay. But this time it's different. When the attacks begin, the odds are like a million to one for Husher and his fleet to even think of slowing them down, let alone beat them. With Fesky still gone, Husher feels lost. He feels this may be it, he's finally fighting a battle that seems impossible to end -- or win. It's bittersweet that this awesome trilogy is ending, even though Bartlett ties up things (well, most things) at the end. He's written characters we learned to like, love, and even hate, but I will still miss reading about them. This is a wonderful trilogy, I'm sure you'll enjoy it.
Read more
One person found this helpful
Helpful
Report abuse
See all reviews

Colin
5.0 out of 5 stars Great end to the trilogy!
Reviewed in the United Kingdom on May 29, 2018
Verified Purchase
Thoroughly enjoyed the finale. Must be an enormous ship for the number of missiles they’re forever launching at the enemy. I did feel sorry for the fighter pilots, if you don’t have subspace tech, you’re a footnote in time! Finished the book on the day I got it - a great ending to the Ixan series. Very happy to have discovered this author and these stories
Read more
Report abuse

Ron Williams
5.0 out of 5 stars To be or not to ????
Reviewed in the United Kingdom on December 5, 2021
Verified Purchase
Quite a lot of action mainly leading to a future which will come to light in the next story with the plot and player's continue their impressive performance
Read more
Report abuse

Laurie R
4.0 out of 5 stars Love the underdog winning
Reviewed in Australia on June 15, 2018
Verified Purchase
Loads of fighting on small, medium and large scales. Angry people who don’t have much time to be happy. Intense and mainly entertaining. Surprises, out of the box winning solutions, sacrifice, loss and pain. Just too much fighting for me this time.
Read more
Report abuse
See all reviews
Back to top
Get to Know Us
Make Money with Us
Amazon Payment Products
Let Us Help You
EnglishChoose a language for shopping. United StatesChoose a country/region for shopping.
© 1996-2021, Amazon.com, Inc. or its affiliates