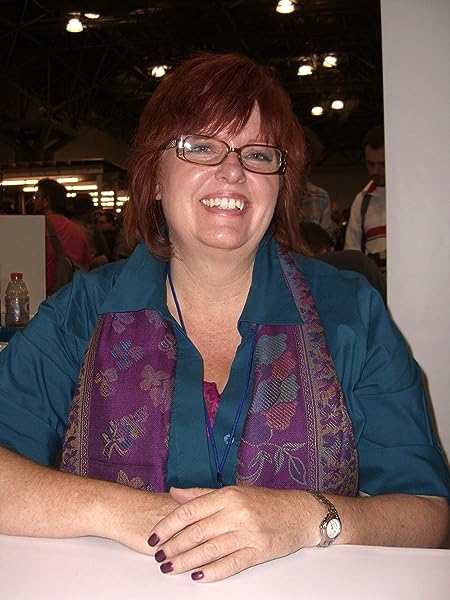 4.5 out of 5 stars
4.5 out of 5
63 global ratings
How are ratings calculated?
To calculate the overall star rating and percentage breakdown by star, we don’t use a simple average. Instead, our system considers things like how recent a review is and if the reviewer bought the item on Amazon. It also analyzes reviews to verify trustworthiness.

clairetoldmetochangemyscreennameTop Contributor: Batman
5.0 out of 5 stars Gail Simone Knocks it Out of the Park
Reviewed in the United States on November 16, 2018
Verified Purchase
Domino is a great supporting X-Men character who doesn't get enough time in the spotlight. That's all changed with Gail Simone's new series that focuses on the mercenary with the luck powers. With gorgeous art by David Baldeon and Greg Land, this new title was an unexpected blast with equal parts humor (any scene featuring Domino's new pet puppy) and heart. When Domino is targeted by a new mutant villain who is capable of shutting down other mutants' powers (think the character Leech but with more control over his ability), she finds herself vulnerable and afraid for the first time after a life spent relying on her innate luck ability to keep her alive. Backed up by her two partners and best friends Outlaw and Diamondback (two other characters who get a great deal of characterization here), Domino takes the fight to her attackers and does her best to find new ways to control her luck. With an amazing cameo by Shang Chi and some genuine emotion this is one of Marvel's best new ongoing comics.
Read more
Helpful
Report abuse

NV
3.0 out of 5 stars Does a lot of things right, but doesn't quite stick the landing.
Reviewed in the United States on January 19, 2019
Verified Purchase
I grew up reading X-Force back in the 90s and had enjoyed a lot of the characters as they evolved throughout the years, and probably by second favorite character from the original roster had to be Domino. So when I heard they were going to be giving her an ongoing series, I was interested, but at the same time a bit concerned considering this was current Marvel, which has had a very bad tendency of having a series peter out and die within its first year.

After reading the first six issues however, while not perfect, I was pleasantly surprised.

First of all, props to David Baldeon’s art, which was a perfect choice for the action sequences throughout. I also really appreciate the fact that Baldeon is able to get his character to emote properly, giving them a range larger than a dozen variations of grimacing. I know some might be turned off by some of the more cartoonish reactions, but thankfully Baldeon is able to keep it reigned in and not become a sloppy mess.

Gail Simone’s writing was enjoyable as well, although I do admit I began to lose interest in the second half of this book. The first half begins with a pretty solid mystery and a new mystery villain (plus I must admit I enjoyed seeing Diamondback again, whom I hadn’t seen in ages), but by the second half the villain feels like they became an afterthought and the way that situation is resolved is rather lacking. Domino herself also goes through a kind of weird personality shift as well. In the first half she’s got her familiar swagger to her, but due to previously mentioned villain and mystery, is feeling a bit out of her depth. This could have a lot of impact, but by the second half, it just feels like a reheated attempt to pull off a “find my inner strength” moment you’d see in some Shonen book. It’s not bad, but it didn’t feel like it had any real gravity to it.

I will probably be picking up Volume two whenever it goes on sale. Thanks for the entertaining read.
Read more
One person found this helpful
Helpful
Report abuse

Doane
5.0 out of 5 stars A new take, plus Shang Chi
Reviewed in the United States on December 25, 2018
Verified Purchase
A bit slapstick at times, but fun. We learn more about the origin of Domino, and she has a new Posse. Not my favorite art, except the covers, but the story sees the reader through. The best part for me was the inclusion of Shang Chi, Master of Kung Fu, in the later issues. I don't know why writers don't use him more as a mentor. Still slapstick with Shan g Chi, but tolerable.
My favorite scene was when Domino got mad, saying, "I'm a Disney princess!" I won't ruin the rest of that scene.
Read more
One person found this helpful
Helpful
Report abuse

Crazed in Black
4.0 out of 5 stars Creative team, great read!
Reviewed in the United States on May 23, 2019
Verified Purchase
Great artwork, interesting set of characters you wouldn't normally see with Domino (Shang Chi, Outlaw, and Diamondback). I like the 'Outlaw" team. Good solid writing, very enjoyable. This set of books gives a glimpse into Dom's history, and works with her learning to control her powers. Aside from that, no lasting repercussions, and nothing earthshattering, but still, an enjoyable read overall.
Read more
Helpful
Report abuse

Chris B.
4.0 out of 5 stars I came aboard for the Master of Kung Fu storyline BUT AM STAYING FOR GAIL SIMONES LADIES😉😉
Reviewed in the United States on January 19, 2019
Verified Purchase
REALLY, REALLY LIKED THIS BOOK!GAIL SIMONE WRITES WOMEN THE ABSOLUTE BEST (THINK BIRDS OF PREY SERIES) AND HERE SHE TRULY SHINES.THE ART WAS DYNAMIC AND I AM TRULY IN LOVE WITH DOMINOS' FEISTY COWGIRL PARTNER; THE ONLY REASON I DIDN'T GIVE THIS A FIVE STAR IS THE LACK OF SHANG CHI ACTION, WHICH ADMITTEDLY IS WHY I BOUGHT IT,BUT AM VERY GLAD I DID.😀
Read more
Helpful
Report abuse

Randy Dieckman
5.0 out of 5 stars Domino dominates
Reviewed in the United States on March 10, 2020
Verified Purchase
A heartfelt story line of a woman seeking approval and an enemy seeking the same..... you won’t put it down
Read more
Helpful
Report abuse

Shane McDermott
5.0 out of 5 stars Magnificent
Reviewed in the United Kingdom on December 18, 2018
Verified Purchase
Absolutely brilliant, this may just become my 2nd most favourite marvel comics franchise! A very good story with well developed personal conflicts and social development, i cannot wait for the next volume.
Read more
Report abuse

Amazon Customer
2.0 out of 5 stars Not that good
Reviewed in Canada on August 24, 2020
Verified Purchase
Artwork is decent, but the writing and plot line is seriously lacking. Disappointing when Domino is a pretty cool character.
Read more
Report abuse
See all reviews