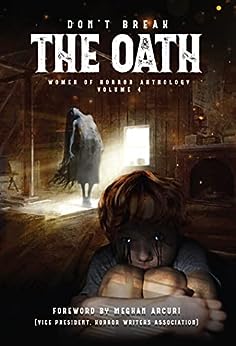 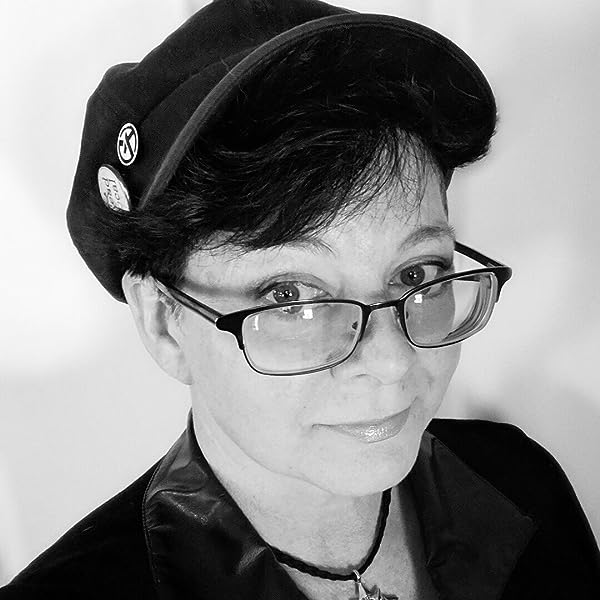 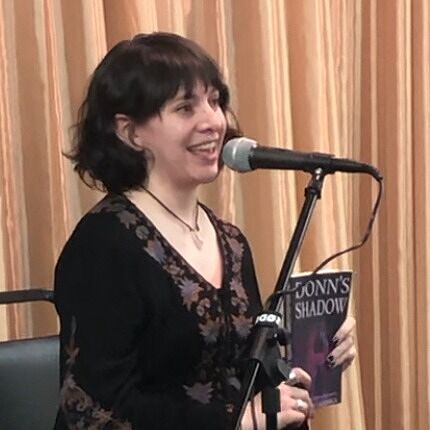 D. Weaver
5.0 out of 5 stars A Quality Collection Of Horror and Humanity
Reviewed in the United States 🇺🇸 on January 16, 2022
Don’t Break The Oath is the fourth volume in a series of themed anthologies written and edited by a group truly talented female writers. This is one of the best horror anthologies that I have read, each story grappling with the consequences of pacts made with demons, family, and technology.

The stories are as unique as the individuals who wrote them, but they are all quality readings. As with any collection, some of the stories connected to me more deeply than others, but at least 11 of the 23 stories contained within this volume are 5 star stories on their own. It is a wonderfully diverse and quality collection.

A word about female authors in horror. So many of us grew up reading King, Koontz, Barker, and Straub, and they are wonderful writers. But the female author brings a voice that is terror and tenderness, horror and humanity, love and loss, passion and pain. I believe that female writers bring a depth and understanding of the soul that allows these stories to seep just a little deeper than many of their counterparts. Trust me when I say that the stories in this volume will scare the hell out of you, and they might just choke you up too.

If you want to dip your toes in a pool of dark water, this is a great anthology to begin with. Like me, you may just decide to dive on in.
Read more
Helpful
Report abuse

Cady J.
4.0 out of 5 stars Whale babies, cat boyfriends, and evil kids - what more could you ask for?
Reviewed in the United States 🇺🇸 on October 25, 2021
I had the privilege of reading an advance copy of this anthology, and I'm glad I did! Between whale babies, anthropomorphic cat boyfriends, and a sociopathic child or two, this collection features a LOT of interesting horror. There are several up and coming names here that I'll be keeping my ear to the ground for, but there were absolutely a few standouts.

The first story in the collection, What the Sea Gives by K.P. Kulski, sets the stage beautifully with a heartbreaking story that is almost more like a dark fairytale than anything else. (Disclaimer: I may have actually teared up.)

There is some amazing creature feature/monstrosity horror between Breaking Up Is Hard to Do (Caryn Larrinaga), Shoot Your Shot (Charlotte Platt), and Misneach (Roxie Voorhees).

The final story in the collection, Fluid by R.A. Busby was another standout for me, and a great way to close out the anthology. A body horror that speaks to the unique body image horror that women face, it was both poignant AND super creepy.

The horror lit scene is absolutely thriving right now, and it's thrilling to see how much of it is coming from feminine voices. This collection is going to be a valuable addition!
Read more
One person found this helpful
Helpful
Report abuse

‘Twenty-three authors from around the world have joined together to tell their stories of pacts with the devil, blood sacrifice, demonic encounters, torment and obsession. Horrors of the body, mind, and soul. Don't break the chain of hands as we speak our Dark Oath.’

The following are my favorites, my immediate thought after reading each, and a snippet I hope will entice you:

‘I do my best to push the memories of my life before the island away. My world before here breathes in perpetual gray. The memory of color would be maddening if I allowed it space in my thoughts.’

‘The planned buddy’s camping trip had not gone to plan. Not from the moment Jay’s car had broken down on the deserted stretch of unclassified road curving around the tops of the moor…’

‘Breaking Up Is Hard To Do’ – by Caryn Larrinaga – Hehehe, I’m not gonna lie, this one gave me a warm fuzzy feeling.

‘“Go away, Nathan.” Jessie’s thin fingers curl around the edge of her front door as she blocks the narrow opening with her body…“I told you. We’re through.”’

‘I’m standing on her stupid “Wipe Your Paws” welcome mat and gripping her doorframe with both hands, partly to stop myself from swaying but mostly to give myself something to squeeze that isn’t her throat.’

‘“I’m not afraid to die,” he said, blinking sweat out of his eyes…Athletic, he’d shaped his body through hard work and venom. Smelled like he’d had years to marinate in his own hate and righteousness, letting it slowly boil up.’

‘The Groom Of Lorelei’ – by Holley Cornetto

‘As the years passed, Liam found himself dreaming more and more often of the maiden of the rock. Some nights she sat staring out to sea, as if she saw more than the turquoise waves pressing in around her. Other nights she sang, and the sea stilled to listen to her melancholy song.

The vast guesthouse that had been hired on account of the matriarch’s upcoming birthday had enough bedrooms to house all of them bar one…[T]he prospect of not being woken by hordes of screaming brats at the crack of dawn rather appealed to him. But how welcome the screaming brats would have been now.’

‘Capable Of Loving’ – by Sonora Taylor – That Was Good!

‘The set had to look exactly like it did on television, or else the children would sense that something was amiss, and they wouldn’t trust their meeting. It was important that the children never lost their trust in Desmond. For many of them, Desmond was the only person they thought they could trust.’

‘Perfect Girlfriend’ – by Angela Yuriko Smith – That Was Good!

‘I have no knowledge of how I came to be standing on a corner next to a row of low budget Scroo-Boos in the rain. I only know that I am here with an activated directive and the wet weather is counter-productive. I don’t mind. I am impervious up to -50° Celsius and waterproof to a depth of 552 feet. But my target consumer isn’t.’

‘Misneach’ – by Roxie Voorhees – That. Was. Awesome!

‘If I could bring him back to life, I’d f**king kill him. I adjust the blanket, and the glowing pain of heartbreak grows in my chest. Once again, I’m hit with the stark realization that he is gone for good.’

‘The Kinda True Story Of Bloody Mary’ – by Tracy Cross – A Blast From The Past - Love It!

‘Taneisha sat in the taxicab, angry her mother had planned her Halloween night. She was finally invited to the double feature at the drive-in by one of the hottest jocks in school…Now, while her friends and the hot jock sat at the drive-in watching Friday the 13th and He Knows You’re Alone, she would be babysitting.’

‘Close To You’ – by Cassie Daley – That Ending, My Heart!

‘Taking a deep breath, she inhaled the scent of lavender and rosemary from the bushes planted just below the window, the combination of pine and floral scents an intoxicating blend that would always remind her of this place and these mornings. They’d been her wife’s idea shortly after buying the house, a small personal touch that Nora didn’t realize would end up impacting her so much later on. So much of being with Sam was like that; small things turned into bigger, better ones along the line.’

‘Agreement’ – by Sheela Kean – That Was Good, Love The Ending!

‘Joey couldn’t believe his luck. It had been ten years since his father died. That meant ten years of entering his name into the state elk hunt drawing and coming up empty-handed. Until now.

‘About fifteen minutes later, John was highlighting a route on a paper map he found in the glove box, scarfing down an old granola bar he’d scrounged from his briefcase, and swearing he would only fly commercial for the rest of his life. With a new understanding of the road, and his belly somewhat sated, he turned the key to start the truck again, only to be met with a gut-wrenching grinding sound.’

‘Subscribe For More!’ – by Jessica Burgess – Hey now, I feel attacked! ;) It was my Mom spiel, too, back in the good ol’ days. Creepy Good - Love This One!

‘‘I was your typical teenager, always with a phone glued to my face, countless hours spent lost in a rabbit hole of God knows what. I’d roll my eyes anytime my dad made those ‘back in my day remarks.’ The ones about the good ol’ days. ‘We didn't have cell phones and computers, back in my day we communicated like everyone should—face to face, having real conversations…Meeting up with your friends on a Friday night and hanging out was never ‘virtual’. More eye rolls in three...two...one. Blah, blah, blah, the usual dad spiel.’’

‘The Trial of Jehenne de Brigue’ – by C.C. Winchester – That Was Good!

‘“Jehenne de Brigue, you stand before this court accused of witchcraft. How do you plead?" Tapestries decorated the stone walls of the large, cold room. A group of men sat up high against one wall, garbed in the colorful robes of religious leaders. A man in a plain black robe sat at the center of a small stone desk below them...He approached the woman who stood before them, her hands bound by rope. The man spoke to her. "What say you, madam?"’

‘Seeds’ – by Marie McWilliams – Dark And All Kinds Of Creepy, Love!

‘Plant a seed and something grows. That's what my grandfather always taught me.’

‘Fluid’ – by R.A. Busby – That Was Good!
‘One evening browsing YouTube to find new Photoshop techniques (“High-End Skin Retouching! Click the red button to subscribe!”) I fell into an Internet rabbit hole and ended up on this video.’

Thank you, Janine Pipe and Kandisha Press, for providing me with an eBook of DON’T BREAK THE OATH WOMEN OF HORROR ANTHOLOGY VOLUME 4 at the request of an honest review. #WIHM
Read more
Helpful
Report abuse
See all reviews
Report an issue
Does this item contain inappropriate content?
Report
Do you believe that this item violates a copyright?
Report
Does this item contain quality or formatting issues?
Report