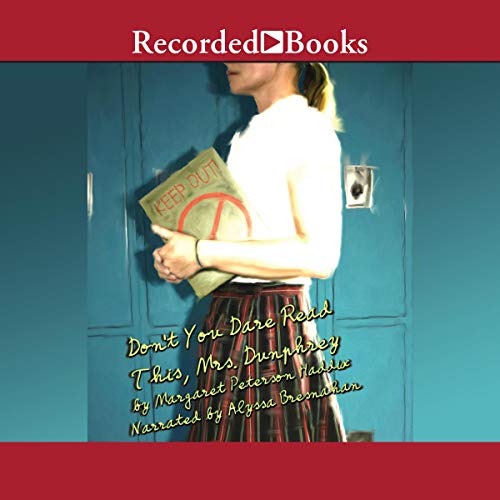 List Price: $13.99
You Save: $2.04 (15%)
By completing your purchase, you agree to Audible’s Conditions Of Use
Sold and delivered by Audible, an Amazon company
Share

4.6 out of 5 stars
4.6 out of 5
122 global ratings
How are ratings calculated?
To calculate the overall star rating and percentage breakdown by star, we don’t use a simple average. Instead, our system considers things like how recent a review is and if the reviewer bought the item on Amazon. It also analyzes reviews to verify trustworthiness.
Top reviews

Ashley English
5.0 out of 5 stars Great!
Reviewed in the United States on November 26, 2018
Verified Purchase
I read this as a teenager and bought it just to re-read. Just as good as I remember. Definitely recommend!
Read more
3 people found this helpful
Helpful
Report abuse

zztigger
5.0 out of 5 stars Great book
Reviewed in the United States on May 23, 2017
Verified Purchase
Excellent read so often students just need to know someone hears them. I used to teach students with emotional disorders and behavior disorders. This should be required reading for teachers as well as students.
Read more
2 people found this helpful
Helpful
Report abuse

greg howitt
3.0 out of 5 stars It's an ok Book
Reviewed in the United States on May 19, 2015
Verified Purchase
This book was ok.I Liked the character Tish. In the middle of the book it surprised me about what happen. the book started getting worse and worse. tish was one of the characters that impacted me personally. I wish the book did not end up so quickly the book should have ended later. I also wished that Mrs. Dunphrey was more involved in the story. The book was worth reading, but it won't be your favorite book. thats why i gave it 3 stars. some words to describe this book are secretive, brave,never give up, and survival.
Read more
2 people found this helpful
Helpful
Report abuse

cool but i would like to know more
5.0 out of 5 stars Great
Reviewed in the United States on September 5, 2017
Verified Purchase
I thought that the plot happened at the right time as the parts of the story came together seamlessly through the out line is hard to do
Read more
One person found this helpful
Helpful
Report abuse

Jeff Parks
4.0 out of 5 stars Good read
Reviewed in the United States on January 5, 2013
Verified Purchase
Good book dealing with a hard topic. I really liked the journal format the book was presented in. I enjoyed reading this book. The package arrived on time and in good conditon.
Read more
One person found this helpful
Helpful
Report abuse

Momma Llama of 2
5.0 out of 5 stars Great Read...But very sad!
Reviewed in the United States on May 23, 2012
Verified Purchase
This was a great read. It was really sad and makes me wonder how many students fall through the cracks like this poor girl in the story! I think every teacher should have to read it to remind them that we don't always know what is going on with the students in our class once they leave school.
Read more
2 people found this helpful
Helpful
Report abuse

Supernova
5.0 out of 5 stars A gem book with a different plot.
Reviewed in the United States on April 9, 2014
Verified Purchase
There's something about Haddix that makes her books stand out. The plots are never action-filled or even climactic, but they're still suspenseful page-turners. This book has a commonplace, simple theme that takes its simplicity and runs with it, and it's executed beautifully. Definitely worth every penny!
Read more
2 people found this helpful
Helpful
Report abuse
See all reviews

Emilie Lamer-Dallaire
5.0 out of 5 stars I Looked for this Book for Years
Reviewed in Canada on October 24, 2020
Verified Purchase
I read this book way back in high school (more than 10 years ago), and since reading it in the library, I've thought about it multiple times. It left such a huge impact on me. My only problem? I couldn't remember the title!

I've been looking for it for about 4-5 years, and just this year my dear friend Google helped me with my really bad summary skills - I found it, and reread it. Honestly? Just as impactful the second time through.

This book is such a true and raw representation of a girl going through the things she does. The emotion in the book is so raw, and I honestly related to her quite a bit growing up. It was comforting to know that I wasn't alone back then. I'd highly recommend it to anyone looking to understand mental health during traumatic events, or just anyone looking for someone they could potentially relate to from their teenage years.
Read more
Report abuse

Veronica
5.0 out of 5 stars An Ally for Abused Teenagers, a Must Read for Teachers
Reviewed in Canada on July 12, 2015
Verified Purchase
This deeply moving book would be appreciated by teens as well as adults.The protagonist is a young girl, parenting her mother, mothering her younger brother, while having no illusions about her father, when he happens to drop in and maxes mother's credit card for Christmas presents. The story is a testimony of bravery of many children, who lost their childhood much too early, being burdened by adult responsibilities. It also made me weep for thousands of children, who are having difficulties at school, being punished for their tardiness and especially for underachieving academically.These kids, so often labelled as 'lazy", have no time and energy left after fulfilling responsibilities their parents are unable to meet. For kids from abusive families, this book is an ally, helping to recognize their parents as troubled adults. For teachers, reading this book may be an incentive to look beyond appearances.
Read more
Report abuse