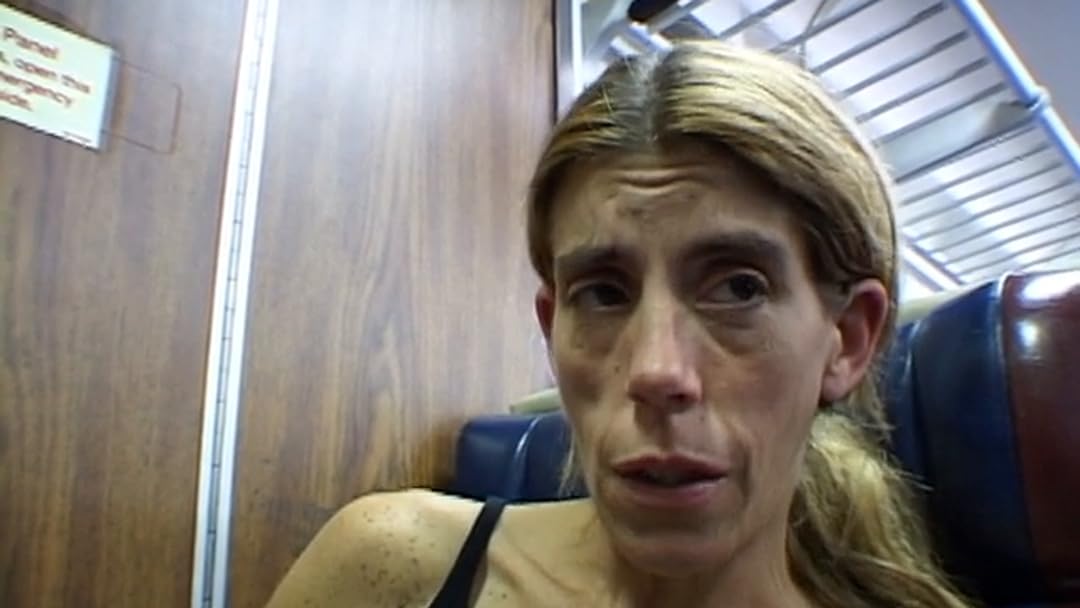 Rentals include 30 days to start watching this video and 24 hours to finish once started.
Add to
Watchlist
Redeem a gift card or promotion code
By ordering or viewing, you agree to our Terms. Sold by Amazon.com Services LLC.
Write review

David R. PierceReviewed in the United States on April 22, 2020
2.0 out of 5 stars
Lots of staged, and very poor acting
Verified purchase
I am a native New Yorker, having spent most of my life there, and I happen to know a few things. Before I get into dissecting this waste of film, let me just say, I'm pretty sure the protagonists of this film were genuine junkies. Anyway, when the one skank was pulling her "I'm an undercover cop" scam, the so called victims sounded like they were reading off of cue cards. There was no sense of fear, or any emotion in their voices that would be there if a person knew they were about to be arrested, and that the ramifications that would arise from such and arrest, would certainly have a traumatic effect on their personal, and professional lives. Then theres the lock picking, and unlocked doors in these ultra expensive neighborhood buildings. In NYC, about 98-100% of buildings used Medico (brand name, virtually unpickable) locks, and frequently, with some sort of electronic type of secure entry device. Then there's the scene where the guy is rifling through his pockets looking for a bag of dope, and the elevator door never seems to open. Yup, just like fake news, you got fake documentaries. Not that this was totally fake, but it was without a doubt very embellished. Anyway, the sum of the movie was ; It sucked. No real entertainment value except the watching, of the suffering of other people (if that's your thing). An absolute waste of time. Be warned.
14 people found this helpful

B. SmithReviewed in the United States on January 3, 2015
5.0 out of 5 stars
Need an update on the four main characters?
Verified purchase
I loved it, and was horrified by it. I wanted to be updated on how the four were doing, so spent some time searching. Michelle passed away in 2012. Tracy and Matt are still together and are clean! They have a beautiful little girl Savannah who "saved their lives" (she is around 7 years old). If you look up Facebook profile "Tracy Bazaar" you will find them. So happy for them.

Edited to add: found a comment from 2012 made by Sebastian's best friend (and roommate) that Sebastian is doing "better" (no comment on whether he is clean). Also that he is in touch with Tracy and Matt and that they may not be doing as well as people think (?). Lastly, he says that Michelle's son, shown in the movie (she also had another son), was in prison at the time. Hoping the best for all.

happyhousewifeReviewed in the United States on June 26, 2019
5.0 out of 5 stars
Excellent barebones documentary that takes you into another world.
Verified purchase
I’m not frivolous with “5 stars” - but I think this film warranted such high marks for a number of reasons.
Mercifully, the filmmaker eschewed unnecessary narration, redundant questioning and the only sound you hear is the sometimes blissful/euphoric -sometimes pained and dejected admissions from the subjects.
Michelle, worn out looking, shrill, easily going from hard and worldly to plummeting into little girl throwing fits- but optimistic most of the time, she summed it up that she & Sebastian had been deduced to “running partners” in their ever present need for the next fix.
Watching her with her son, I felt sorrow for him. His flat effect describing the history of his Moms rehab attempts- he no longer could muster up even a sliver of hope. He wants her to get better - but if she relapses again, oh well.

With Tracy & Matt, well my POV may be divergent and certainly am anomaly- but there were moments I felt a pang envy. Yes they were junkies, but I could feel the intense, crazy-in-loveness swirling around them. So what? I thought, they are happy. Im aware some viewers balked at Tracy’s dad totally enabling their habit - but i think I’d be the same way. He doesn’t want his child turning tricks. He wants them to be warm & safe so gives them a small but perfectly fine apt....and a dumbfounding amount of sweaters.
I think he can see a day they will tire of this rambling way of life and settle down.
Beyond the 2 couples talking to each other, and sometimes talking to the camera - you hear the cacophony that is NYC. The subway sounds, honking horns, chatter...and c’mon, how jaded are New Yorkers, in one scene Tracy is throwing a screaming fit and throwing punches walking down the sidewalk, middle of a sunny spring looking day, and not one, NOT ONE pedestrian even bats an eyelash-just keep on walking.

I live in a nice home. But I’m only in my late 40’s and have been profoundly disabled for 7 years. Pain is something I live with constantly. I have several serious disabilities and currently I’m possibly looking at a bone marrow transplant-did I mention I’m on oxygen 24/7! So I rarely leave the house. Beside my bed are a dozen different medications.
I feel like a burden to my husband sometimes- so much attention to my care. To be in New York, strolling arm in arm, millions of people but feeling only each other’s presence, and sharing whatever sustenance, even if it’s a syringe full of heroine that amplifies it all....I can’t say that doesn’t sound alluring to me. Only a passing fantasy.
We all have to make it through life the best we can.
*I saw in another reviewers comment that Michelle passed away in 2012. Which naturally isn’t a surprising think to learn. I’m sure her son had envisioned her death many times. For him at least he doesn’t have to worry about her.
Anyway. Great documentary, real/raw/ compelling.
13 people found this helpful

RuntyBuntyReviewed in the United States on February 28, 2019
4.0 out of 5 stars
So glad I’m clean and sober again!!!
Verified purchase
It really reminded me WHY I got clean. My God, watching them, I was just disgusted knowing that I used to be just like them. Yuck! Just plain filthy and grody. Drugs seriously don’t do anything for me anymore except literally make me sick to my stomach. Yeah, I had to tap out around the 10 minute mark, but if you are naive to drug abuse, most definitely watch in its entirety because that’s EXACTLY how it is. Just plain UGLY and downright HORRIFYING!!!
12 people found this helpful

NemoReviewed in the United States on March 22, 2019
5.0 out of 5 stars
Thank you
Verified purchase
I wish and hope that they show this documentary to people at the detox hospitals. Maybe if people can see themselves through these two couples, it may make them want to stay sober. This was an excellent documentary. My step mother was a drug addict. She was murdered in NYC. A man stabbed her to death and chopped her up in pieces. Watching this was like stepping into her world. She was so good to my sister and I. I wonder if these producers follow up on their subjects?
4 people found this helpful

Rachael J SkeltReviewed in the United States on March 14, 2021
1.0 out of 5 stars
Disturbed by the 2 male strangers and the VERY GRAPHIC BJ
Verified purchase
I was frantically trying to find the remote about 10 minutes in. I was saying dear God please help me find my remote before someone walks in and sees this disturbing scene on my tv screen! I finally got it off and felt very disturbed and have an image in my head I can never unsee!! I prefer not to see 2 men as it is but ESPECIALLY seeing one giving a bj to a stranger so closeup so graphic so disturbing not something I ever wanted to see ever! It’s sick they are even allowed to show that. I just thought about the one filming and how they were cool just sitting right next to them filming them so closeup like that it had to be a very awkward several minutes ugh I never even considered the possibility of such a graphic scene being in the documentary I was really looking forward to watching. I was too shocked and disturbed to continue on so watch at your own risk!

Lisa L. GradyReviewed in the United States on November 29, 2021
4.0 out of 5 stars
Need a follow up
Verified purchase
Found out that Tracy lives near her father in Philly w her 13 yo (2021) daughter who was birn w Cerebral Palsy. Looks like Matt was out of the picture before 2015 ? No info on him. Apparently Tracy had another bf that died of substance abuse.

Nothing known on Sebastian or Michelle or even Matt

Simone DorseyReviewed in the United States on July 5, 2015
5.0 out of 5 stars
Spectacular
Verified purchase
I was enthralled by the characters and I really loved how the cameramen/directors did NOT partake in anything. They were just watching as we were and not interfering with anything that happened in their lives. It does make me sad to hear that Michelle passed but unfortunately that is the awful end for many addicts who cannot get and stay clean. I hope this was informative for those who have never witnessed illicit drug use and I hope that it was enough to make one not want to try. Though we never find out how or why they are living on the street and how or why they became addicted to drugs, their stories are real and they are real people and this sadly happens everyday, in every city, suburb, small town...
See all reviews
Back to top
Get to Know Us
Make Money with Us
Amazon Payment Products
Let Us Help You
EnglishChoose a language for shopping. United StatesChoose a country/region for shopping.
© 1996-2022, Amazon.com, Inc. or its affiliates