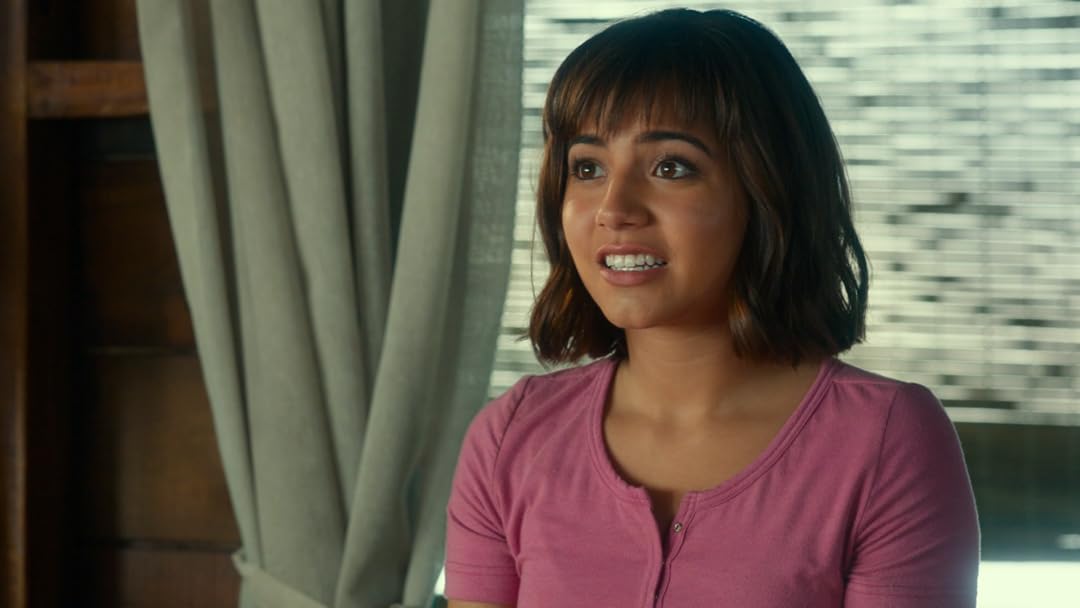 Dora And The Lost City Of Gold (4K UHD)

(2,736)
6.11 h 42 min2019X-RayHDRUHDPG
When her parents disappear in search of the Lost City of Gold, Dora swings into action on a wild quest to find them. Follow Dora and her friends as they navigate the jungle, outrun treasure hunters and unlock the mystery of the fabled city.

R Sam McGeeReviewed in the United States on November 21, 2019
5.0 out of 5 stars
Funny and cute
Verified purchase
This movie is geared toward the small children and not for those who want to see Star Wars/Avengers type movies. The cartoon spot was cute and a blast from the past. Funny & cute it's so refreshing to see and watch a movie that doesn't have Sex, Violence, Slashings, Perverseness . That being said this movie followed the series with Dora talking to the screen audience, Backpack, Map and Swiper " Awh man". We saw this at the movies and decided that we would purchase it when it comes out on video the outtakes were cute and funny. How can anyone give a negative rating on product when the never tried or received an item . One finds a lot of reviews not about the product use but packaging
Lastly, when we watch/see movies like this we need a child's perspective. And why not ask them what they thought about a movie . We do this at our house
17 people found this helpful

A. Nony MouseReviewed in the United States on November 30, 2019
4.0 out of 5 stars
Not too scary for kids.
Verified purchase
Got this for my granddaughter, but of course I had to watch it first to "make sure it was appropriate" for a five year old. In the beginning I recognized Dora's father [Michael Pena] and sort of recognized Dora's mother [Eva Longoria] but had to check the cast to make sure about Eva. Begins with a young Dora and her cousin Diego, then jumps ten years later to Dora being sent to Los Angeles to stay with Diego and her aunt while parents are looking for a lost temple. Dora becomes a misfit in the LA high school scene, but proves her worth with she, Diego, and two more classmates are kidnapped during a museum visit and end up back in the jungle during a search for Dora's parents. Not too scary for kids, the bad guys are bad but stupid, the natives are terrible shots with crossbows and modern arrows, and there is a happy ending all around (hey, it's a kids movie).
11 people found this helpful

Jaime DoverReviewed in the United States on November 18, 2019
4.0 out of 5 stars
Surprising....
Verified purchase
Yeah that is the word I would give it. I took my niece to go see it after we saw the trailer. It looked like something I wouldn't be bored with and the stars in it was... well decent. The movie wasn't the greatest but I would not say it was horrible. It felt like a Tomb Raider or Indiana Jones adventure for younger people and we enjoyed it. So preordered ad paid for the movie to arrive. I would recommend seeing it for yourself and judging buut if they somehow made a small handful of adventure movies I wouldn't say no to supporting it.
9 people found this helpful

CapixabaReviewed in the United States on December 9, 2019
5.0 out of 5 stars
Very entertaining movie!!!
Verified purchase
This may be listed a kids movie but the wife and I are 73 and we still loved it, very funny. It helps you forget the reality of life in this day and age. We all need a moment or 2 of something on the light side. Thank you!!!
7 people found this helpful

JasonReviewed in the United States on March 12, 2020
5.0 out of 5 stars
Positive bundle of fun.
Verified purchase
Surprisingly fun. Went to see this in Dolby cause I thought the idea of seeing Dora in Dolby was humours. Happened to love this movie, also Dolby didn’t add much. Still a funny movie. What I found to be the best part making this film is that Dora is a great recreation of that cartoon positivity smooshed into reality. Also I think she my be on the spectrum at the very least and I found that refreshing that the narrative never address it other then she’s positive and they are not.

I’d recommend this movie to people that like things positive, little quirky, and cute. Ps I have literally no idea who this movie is for age wise. But as a adult male I enjoyed it way more then I should have.

Austin David LillyReviewed in the United States on September 17, 2020
5.0 out of 5 stars
Dora is the star, she shouldn't have been made to look so dumb... Disappointing.
Verified purchase
Jesus said to him, “I am the [only] Way [to God] and the [real] Truth and the [real] Life; no one comes to the Father but through Me. John 14:6 AMP

Emma GiovanniReviewed in the United States on November 11, 2019
5.0 out of 5 stars
Great Movie
Verified purchase
Loved the movie. It was hilarious. Youd have to watch the cartoon to understand the jokes tho
6 people found this helpful

Kyle HurleyReviewed in the United States on November 20, 2019
5.0 out of 5 stars
👍 Most certainly, Boots!
Verified purchase
The family and I enjoyed this movie that had humor, wit, friendliness within the group of people that Dora was for the first time around from the city. I'd recommend this to anybody including kids. Nothing wrong with this flick, but however I will say that the lady playing Dora was a bit older to play the character but she did it well as Dora though. 👌
4 people found this helpful
See all reviews
Back to top
Get to Know Us
Make Money with Us
Amazon Payment Products
Let Us Help You
EnglishChoose a language for shopping. United StatesChoose a country/region for shopping.
© 1996-2022, Amazon.com, Inc. or its affiliates