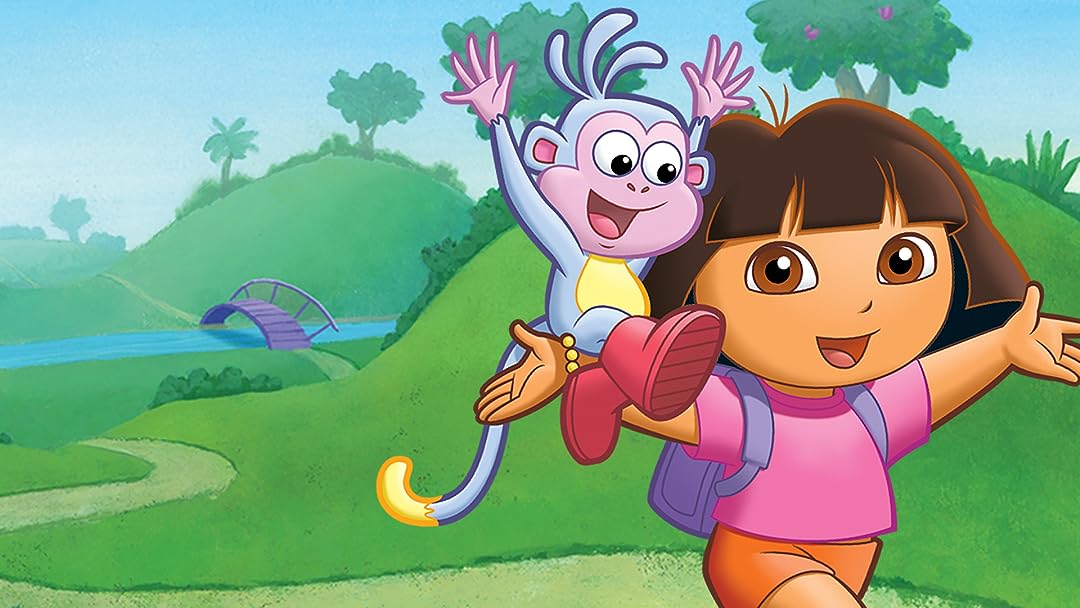 (2,832)
4.22001X-RayTV-Y
Let's go! Enjoy the complete first season of Dora the Explorer! Dora and Boots need your help to overcome all the classic obstacles from their very first adventures, such as Strawberry Mountain, Crocidile Lake, and of course, Swiper the Fox!

This wouldn't be such a big deal, except that Amazon only has a few shows that actually appeal to our daughter, and Dora the Explorer is one of them. I'm used to Disney pulling streaming content and charging high prices for their movies and such, but now Nickelodeon? Wow. I now have less respect for Viacom / Nickelodeon because of this.

But then, I suppose it's a good thing we are now spending more time reading books than watching TV.

Anyway, as for the show: it's a cute preschooler's show that helped our daughter start to speak in both English and Spanish. It's VERY predictable, VERY based on routines -- but that's just what pre-K kids need.

With regards to other shows on Amazon video, our daughter's other favorites have been Tom the Tow Truck and related Car City series (Tom the Tow Truck's Paint Shop, Construction Squad, Car Patrol and Super Truck) as well as Super Wings. We tried watching Tumble Leaf. It was all-right, but it doesn't seem to be a favorite. The Thomas the Train series may still be included with Prime membership. It's just that I personally have ideological objections to that series (somewhat progressive values vs. the series' more traditional values regarding societal roles).

I wish you guys luck in figuring out what works best for you. Dora worked somewhat for us, but the episodes went quick for our needs. Same with Super Wings and definitely Tom the Tow Truck, etc.

Jasmine HenryReviewed in the United States on November 17, 2016
3.0 out of 5 stars
The music is fire!
Verified purchase
I used to love Dora and her adventures, but watching it now. There are some weak plots. They ask questions with such obvious answers and it drives me crazy. There are still a lot of funny moments in each episode, and the music is AMAZING! The music is definitely the best part of the entire show. Every time a song comes on I'm lit!
15 people found this helpful

SteveReviewed in the United States on January 11, 2018
4.0 out of 5 stars
Four Stars
Verified purchase
Children loves it.
15 people found this helpful

mom of 3Reviewed in the United States on April 21, 2016
5.0 out of 5 stars
Sing - Dddd Dora, Dddd Dora, Dora Dora, Dora The Explorer......Got it stuck in your head, now, don't cha?
Verified purchase
Dora the Explorer has been a huge hit in my house since 2004, my youngest is 2 years old and we watch Dora every single day. It is amazing what kids actually learn from this show. Though the high pitched voices can be irritating if you let them. Let your inner child lose and sing along - it's actually fun!!! That's what I do, been singing along with Dora for 12 years now. I got a feeling Dora is here to stay! Thank You, Amazon for Prime Access! My only complaint - I wish all the seasons were all available via Prime.
10 people found this helpful

William G. PrattReviewed in the United States on December 25, 2013
3.0 out of 5 stars
Teaches Some Skills But Repetitive
Verified purchase
"Dora the Explorer" targets younger children with the prospect of going on adventures with Dora and Boots (her monkey friend). They succeed with this as Dora talks to the viewer(s) directly, asking for help as they continue their journeys.
Pros: Teaches sequencing, logical thinking, and has some Spanish language learning thrown in.
Cons: VERY repetitive.
If they want to make this show more appealing, they should introduce some variety and maybe make more of a continuous storyline the children can follow between episodes rather than having each one be a completely-standalone show. Overall, it's a good program for children to learn some things and have fun too, but they could get bored after watching just a few episodes.
6 people found this helpful

NikolikoReviewed in the United States on November 29, 2014
5.0 out of 5 stars
My two year old loves it.
Verified purchase
My two year old gets to watch limited television, but when she does get to watch we like her to watch shows that teach her positive things and we feel like Dora does. She's learned new words and has started to participate in the adventures, which is great. She loves Dora and all the shows she's seen in all of the seasons.
23 people found this helpful

DianeReviewed in the United States on November 3, 2016
5.0 out of 5 stars
Fun Series
Verified purchase
Like the Diego series, the Dora episodes are a great way to keep the little ones entertained in a restaurant while we wait for our meal to be served.
14 people found this helpful

S. LawlerReviewed in the United States on September 3, 2016
5.0 out of 5 stars
Great show
Verified purchase
My daughter 3 and son 2, love this,show.
18 people found this helpful
See all reviews
Back to top
Get to Know Us
Make Money with Us
Amazon Payment Products
Let Us Help You
EnglishChoose a language for shopping. United StatesChoose a country/region for shopping.
© 1996-2022, Amazon.com, Inc. or its affiliates