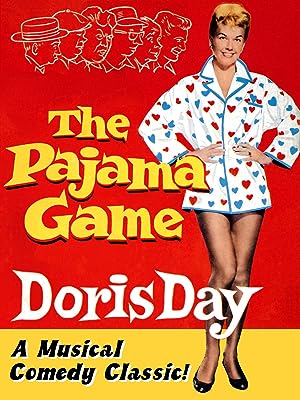 Doris Day in The Pajama Game - A Musical Comedy Classic!

(8)
1 h 40 min1957X-Ray13+
Employees of the Sleeptite Pajama Factory are looking for a whopping seven-and-a-half cent an hour pay raise and they won't take no for an answer. Babe Williams (Doris Day) is their feisty employee representative, but she may have found her match in shop superintendent Sid Sorokin (John Raitt). When the two get together they wind up discussing a whole lot more than job actions!

Janis WoehlerReviewed in the United States on November 24, 2021
4.0 out of 5 stars
In today's world, very politically incorrect
Verified purchase
As a musical, its fun and entertaining. But, oh my, the old values of bigotry, racism, sexism and prejudice is right there for you to see, review and cringe. I'm an old lady and I enjoy vintage and classsic movies, but they are always a reminder of how much further we need to grow.
7 people found this helpful

R.L.Reviewed in the United States on December 1, 2021
5.0 out of 5 stars
Early Fosse Choreography
Verified purchase
I'm reading Bob Fosse's bio, and Pajama Game is the second 50s film I've seen which features early Fosse choreography. The other was Damn Yankees.
Unfortunately, Pajama Game didn't have Gwen Verdon to heat things up, but it did have Carol Haney doing the only real Fosse number in the film--the fabulous Steam Heat. Michael Jackson must have stolen a few ideas for his spacewalking from that number, white socks and all.
The other highlights of the film were the wonderfully warm Doris Day and the great tenorish voice of John Raitt. Both did solos of the feature song "Hey There" at different points in the film. Together not very good, because of the disparity in their voices. Raitt is a trained tenor (or very high baritone) who played the original Broadway lead in Carousel, while Doris is one of the great pop singers--and a fine actress as well.
The rest of the film I found rather dull and outdated, though Eddie Foy, Jr provided some comedy and Hernando's Hideaway did bring things to life a bit.
It was exciting to see the great dancer Carol Haney come to life in the famous Steam Heat number--a glimpse of the Fosse that was to come. Was the dance partner on her right Fosse himself? He did such a walk-on in a duo with Gwen in Damn Yankees.

LilyReviewed in the United States on January 7, 2022
5.0 out of 5 stars
Movie musical which used most of the original broadway cast, YES!
Verified purchase
So often Broadway gems are lost, Pajama Game kept most of the original actors, music, and choreography from the Tony award winning show. We get to see an early Bob Fosse direction (his second). We get to see Eddie Foy, Jr and Reta Shaw sing and dance "I'll Never Be Jealous Again." It is pure genius, true musical theater. I love how Foy fights his impulse while Shaw gives him scenarios.

Both Foy and Shaw were stage actors who played fantastic actors in movies and television. Foy was one of the Seven Little Foys in vaudeville and played in several B movies in the 40s. Reta Shaw played in childhood Disney favorites, Mary Poppins and Pollyanna. However, I remember her as Big Maude Tyler and Eleanora Poultice on two different episodes of The Andy Griffith Show.

trdavidsonReviewed in the United States on December 25, 2021
1.0 out of 5 stars
Astonishingly bad print
Verified purchase
I felt that the print quality was so bad that it wasn't worth the effort to watch. I'm sure it's a good movie, though.
2 people found this helpful

Mama DearestReviewed in the United States on January 5, 2022
2.0 out of 5 stars
Not for me
Verified purchase
I love Doris Day movies and was surprised when I found this one I'd yet seen. I thought I'd surely seen them all. I did not like this one at all and wish it has stayed hidden from me.

Sandy HarrisonReviewed in the United States on December 28, 2021
5.0 out of 5 stars
I love it!
Verified purchase
Great! Fun & funny! I love the dresses. The singing is great as well.
See all reviews
Back to top
Get to Know Us
Make Money with Us
Amazon Payment Products
Let Us Help You
EnglishChoose a language for shopping. United StatesChoose a country/region for shopping.
© 1996-2022, Amazon.com, Inc. or its affiliates