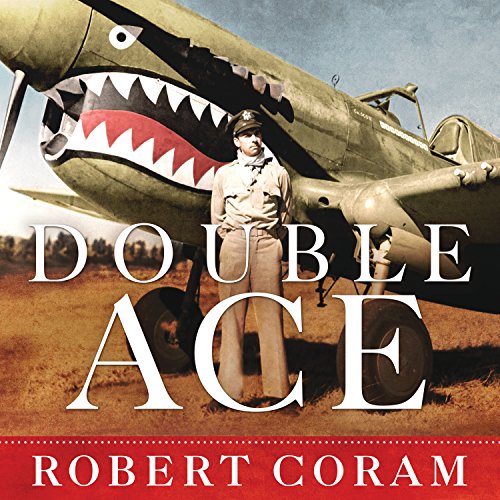 4.5 out of 5 stars
4.5 out of 5
35 global ratings
How are ratings calculated?
To calculate the overall star rating and percentage breakdown by star, we don’t use a simple average. Instead, our system considers things like how recent a review is and if the reviewer bought the item on Amazon. It also analyzes reviews to verify trustworthiness.
Top reviews

Daniel Jackson
4.0 out of 5 stars Review of Double Ace
Reviewed in the United States on September 17, 2016
Verified Purchase
In Double Ace, Robert Coram does an incredible job spinning a fascinating tale about Brigadier General Robert L. Scott, Jr., one of America’s more controversial heroes of World War II. To his credit, Coram paints the picture of a complicated man whose tall tales stretched (or sometimes completely ignored) the truth. The warmth of Scott’s personality in “bugling” his way through stories contrasts with his selfishness in ignoring his wife and child and his multiple extramarital affairs. Coram went to great lengths to plumb the depths of Scott’s own multiple narratives of his life to find some strand of truth. He even dug to find the original accident reports or other documentary evidence to find an objective touchstone for many of Scott’s stories. I found myself surprised, however, that in a book that seeks to put tall tales to rest, the author perpetuated some some tall tales and stereotypes of his own. For example, he passes on the story of Wendell Willkie and Madame Chiang having an affair – a rumor now known to have little validity. He also ignores much of the complexity of World War II China and is instead satisfied to paint a simplistic caricature of Chennault, Stilwell, and particularly Chiang. To simply paint the Nationalist regime as one held together by the force of Song Meiling’s personality and to paint Chiang as a corrupt petty-tyrant, is to make the same mistakes that led to American disaster in China in the first place. The problem seems to stem from Coram’s overreliance on anecdotal histories of the theater – other biographies and autobiographies make up most of his source material for characterizing the war in China. That being said, Double Ace is the best CBI-related biography to hit the shelves in some time. In both quality of research and writing, it is clearly superior to the recent When Tigers Ruled the Sky.
Read more
9 people found this helpful
Helpful
Report abuse

George E. Manners Jr.
5.0 out of 5 stars It is highly recommended.
Reviewed in the United States on November 8, 2016
Verified Purchase
Coram has several outstanding biographies of military figures who made significant marks ... generals and non-generals. He has reached back to update attention on a very unique character. And what a character! The book starts a little slowly, but keeps getting more-and-more exciting. It is highly recommended.
Read more
2 people found this helpful
Helpful
Report abuse

Robert Simpson
4.0 out of 5 stars Entertaining story involving many of the military heroes of my ...
Reviewed in the United States on January 15, 2017
Verified Purchase
Entertaining story involving many of the military heroes of my youth, with amusing, if sometimes questionable, details about Robert L. Scott, Jr. The author is obviously a talented and skilled writer, but I was put off by his sometimes casual, even outright incorrect, military "facts." "Vinegar Joe" Stilwell was a highly accomplished general. No, the Marines were not the only service fighting in the Pacific -- the Army had a number of divisions fighting there. And, on a simpler level but still upsetting, no, the pace for soldiers marching at quick time is not 105 steps per minute.
Read more
One person found this helpful
Helpful
Report abuse

Jim U
5.0 out of 5 stars Most memorable fighter pilot story
Reviewed in the United States on April 21, 2021
Verified Purchase
Very early in World War II Japan invaded china. China turn to professional fighter pilots to help them with stand the Japanese. Hence, the flying tigers pilots were paid to shoot down Japanese Zeros. In prior wars in early history they would have been called mercenaries.Here, the flying tigers were heroes. JRU
Read more
Helpful
Report abuse

Ronald Grein
5.0 out of 5 stars It was different .
Reviewed in the United States on August 29, 2019
Verified Purchase
Did not hold my attention very long otherwise not bad.
Read more
Helpful
Report abuse

David Ogden
5.0 out of 5 stars Fascinating history of a brave but flawed American hero...
Reviewed in the United States on September 12, 2020
Verified Purchase
I loved it!
Read more
Helpful
Report abuse
See all reviews
Back to top
Get to Know Us
Make Money with Us
Amazon Payment Products
Let Us Help You
EnglishChoose a language for shopping. United StatesChoose a country/region for shopping.
© 1996-2021, Amazon.com, Inc. or its affiliates