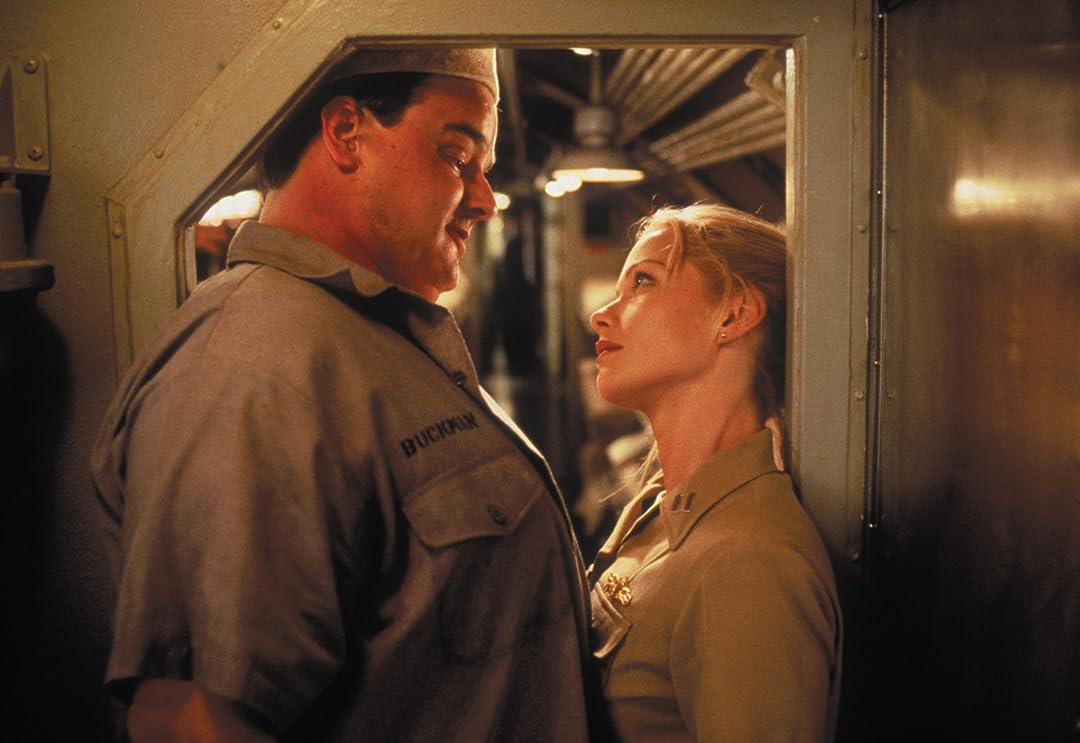 MaebeeReviewed in the United States on June 15, 2019
5.0 out of 5 stars
Welcome Aboard
Verified purchase
I bought this for my brother. We used to watch it as kids (good job mom), so it was a nice blast to the past. "Welcome aboard" became a running joke in our family. Also shouting "Buckman" at whoever was cooking. I really did not want to own this dvd. It was his dvd. Unfortunately, he was granted permission for a transfer off of this Earth. I don't know if I'll ever be able to watch this again. It's a comedy, for goodness sake. But I can't even look at the case. He can't watch it. I can't watch it. Please watch it for us, and pour one out for my brother.
34 people found this helpful

LeleRReviewed in the United States on November 9, 2018
5.0 out of 5 stars
This is one funny movie
Verified purchase
My husband and I are both retired Navy vets. While we know the plot and some of the scenarios are completely fake and would never happen, we just love this movie. This is a well written comedy with a cast that can pull it off. The movie has been out for a long time and we have watched it a lot over the years and we still laugh every time we see it.
36 people found this helpful

David MoodyReviewed in the United States on August 21, 2017
5.0 out of 5 stars
Ignore the critics - VERY entertaining.
Verified purchase
I have read that this film got poor reviews when it came out. I must suppose that some movie critics don't consider "entertaining" to be a valid goal for a filmmaker to shoot for. This film had silly aspects, serious aspects, for me actually provoked some thought, and was VERY entertaining. I thought Kelsey Grammar did a fine job of portraying a good officer (albeit with a maverick streak) who is given a crew that is a ragtag bunch of misfits, and an unusual mission (and "higher orders" that no one else knows about). Bruce Dern was good as his enemy (an admiral) who gets more and more psychotic as the film goes on. I learned about this movie from the Web site "TV Tropes", which has a lot of good stuff on this movie (and many, many other things).
36 people found this helpful

Bruce R. FloridaReviewed in the United States on July 25, 2020
5.0 out of 5 stars
great movie!
Verified purchase
when I ordered this movie I was a little dubious at first, the reason i say this is from the distributor of this movie { CD Imports } I was concerned that this only played in Region 2 in Europe but my apprehension was quickly relived
this not only played on my computer but hoping it will play on my DVD player. Anyway this is one funny movie I can't imagine the U.S. Navy condoning any funny crap like this, the best part of this movie is when the captain kicks the admirals ass so bad it frustrates him to no extent. besides that Lauren Holly sure fills out the uniform to busting,
the rest of the actors were great and doing there best as submariners at best, highly recommend this sit back and laugh at Kelsey Grammer at his best. Thankyou C.D. Imports for a great movie>

Gary R. JordanReviewed in the United States on April 11, 2017
5.0 out of 5 stars
Excellent Comedy
Verified purchase
This movie is a classic comedy.
The underdog fighting the system.
A unorthodox navy officer given command of a WWII submarine,
a crew of misfits and an impossible war game mission.
The cast is perfect in their characters:
Kelsey Grammer as Dodge,
Rob Schneider as Marty Pascal,
Harland Williams as Sonar (Especially hilarious)
And the rest of the cast are great.

K. DeVReviewed in the United States on September 12, 2013
5.0 out of 5 stars
Great movie for Go-To Silly Fun!
Verified purchase
This is not a great movie. I've no false hopes that this movie will win any awards. This is however, the perfect movie for when you just want to have a good time and some great laughs. You can read the synopsis to find out about the film's plot. What you can't read is how good the acting is. The entire cast are able to put a comical spin on everything keeping the whole film light and fun, but there's actual really keen acting going on here. Above the comedy, the acting shines brightly.

I have seen almost all of these actors in other roles from NCIS to any of slue of Jerry Bruckheimer shows. The characters they portray in those other roles are so 180 degrees from their goof-ball characters in this movie that it's sometimes difficult to accept their more serious roles. Then again, that's why they're actors.

Some people have complained that the movie does not comply with all of the customs and courtesies of military bearing (saluting, reporting for duty in civilian dress, etc.), while some of that is true, let's not forget that this is a movie designed for laughter. As a retired military member, I can waive the minor inconsistencies in favor of enjoying this movie.

In summation, if you want a fun movie that'll get you laughing, still present quality acting, tells a story, makes you woot for heroes, then this is that movie. I've watched it countless times and will continue to do so. I do so not because I'm enamoured with any particular actor, but simply because I love this film.
40 people found this helpful

Gary in Stone MtnReviewed in the United States on July 8, 2021
4.0 out of 5 stars
Very Funny But No Bonus Material
Verified purchase
Not to be taken seriously, the film is all about just having a good time with a happy ending.
There are a few points in the movie that seem odd. It is as if a scene was cut. For instance, the character Howard is much older than the other submarine sailors and never wears a uniform. He is played by actor Harry Dean Stanton who really was in the Navy during WW2. It was not explained that the character Howard is hired as a diesel mechanic and is not Navy.
The movie crew rented Red October sets and filmed using the real historical submarine boat USS Pampanito. So much more could have been added as bonus material, but is out there on the internet.
Noticed this DVD comes from Australia, so was concerned about region coding. I am happy to report that it is encoded NTSC with no regional blocks. The technical quality is very good, a clean transfer but with NO menues.
I am giving it 4 stars because, well, true 5 star movies are rare. But it allowed me to leave my cares behind for a while and enjoy the story of a rag-tag crew assembled for a special mission. So, get the movie for about the price of a large pizza and just enjoy.

Ciera MarieReviewed in the United States on March 17, 2017
5.0 out of 5 stars
My favorite movie of all time!!!
Verified purchase
I love this movie!!! I have loved it for years. Definitely not a child friendly movie. Good for teenagers and adults. Even though this is an older movie it is not dated at all. Showed it to my teenage brother in law. He thought it was so funny. He didn't know that it was a 90"s movie until I told him. He thought that it was brand new. My husband and I watch this movie every couple of months and it always has us crying from laughing so darn hard.
12 people found this helpful
See all reviews
Back to top
Get to Know Us
Make Money with Us
Amazon Payment Products
Let Us Help You
EnglishChoose a language for shopping. United StatesChoose a country/region for shopping.
© 1996-2021, Amazon.com, Inc. or its affiliates