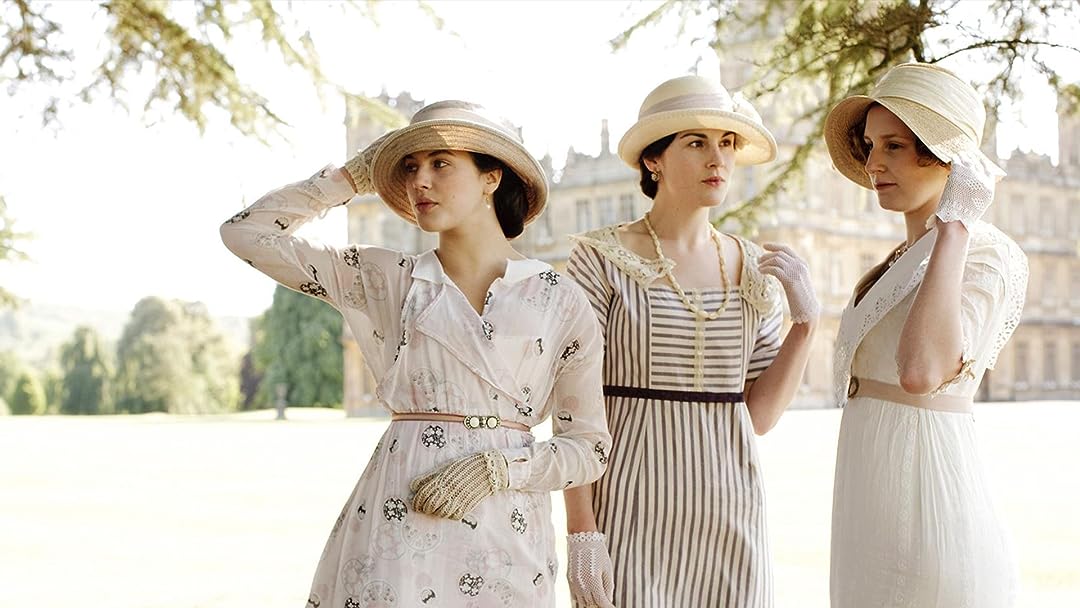 (44,672)
8.72011X-RayTV-14
After a tragedy at sea claims the life of the presumed heir, Lord Crawley is faced with the possibility that the house he's loved his whole life might someday belong to a distant cousin he's never met. Will the fate of Downton and its family be resolved?

DorothyZReviewed in the United States on July 31, 2017
5.0 out of 5 stars
Of course like everyone else
Verified purchase
I'm one of those people that refused to watch this show because EVERYONE was talking about it. It took me until season 5 was airing originally before I started to watch. Of course like everyone else, I was hooked instantly. I loved it so much I decided to start from the very beginning again when I saw it on Amazon. Beautifully acted, and lovingly produced, there is so much to enjoy about this series it's hard to pick out the best parts. There is a wonderful balance between the storylines with the servants and the aristocrats. The characters are beautifully drawn and very relatable. The truth is at the end of the day it's an extremely high end "soap opera". I mean that in the best way possible. It's a pure joy to watch.
193 people found this helpful

Anastasia BieberhousenReviewed in the United States on November 25, 2017
5.0 out of 5 stars
but he pulled it off beautifully.
Verified purchase
I've been watching this series repeatedly for years. I've watched it five time through. Unbelievably, I am just now looking at the reviews. I have never, ever, ever seen such an overwhelming five-star review. Over 90% of reviewers gave this series five stars. There is nothing left to say at this point about this series because everyone knows what it encompasses and if it's for them. I just truly thank PBS for producing and broadcasting this series. It is sorely needed in this world of crudeness mistaken for talent. Honestly, it didn't need a bit of that to be superb. That is the sign of true artistic expression, true artistic talent and creativity, and I'm so thankful for this series. Adult humor, intelligence, silliness, irony, deep character development, historical accuracy, it has it all. Those shows and movies endeavoring to gain success through shock value and exploiting women, for example, have much to be jealous of, because this series kicks those series' asses. The historical accuracy down to how they sit, speak, move their heads, et cetera, is extensively researched and executed, but the humor and vulnerability of aristocracy makes us watch it. Lord Grantham, well, he was Squiggy in Knotting Hill, and I was so surprised to see him here in such a gallant role, such a dichotomy, but he pulled it off beautifully.
106 people found this helpful

If you need car crashes and things being blown up and all other sorts of shock-value violence you should definitely not choose Downton Abbey for this show is not about special effects, it's about real acting.

Kathy KleinReviewed in the United States on January 1, 2017
5.0 out of 5 stars
PBS Does It Again - Downton Abbey is Magnificent!
Verified purchase
The acting, the story line, the backdrop are all first rate. If you love period pieces, this is definitely a drama you need to watch. Seeing the British aristocracy have to change with the times and the growth of the characters will make you want to watch this through all five seasons. This is my second time watching this and I continue to laugh at the Dowager, cry with Lady Mary, Lady Edith and Branson, cheer on Mrs. Passmore, Mrs. Hughes, Anna and Bates and despise Mr. Green and Thomas. This show has such good acting that you feel like you are a part of it all. Try it and I assure you, the Yorkshire countryside, the castle and the characters will keep you enthralled.
46 people found this helpful

Salem BuyerReviewed in the United States on June 21, 2016
5.0 out of 5 stars
A wonderful show about the rich and their servants.
Verified purchase
An intriguing look into the lives of wealthy British aristocracy and their large and diverse group of servants, as they face the challenges of a changing world in early 20th century England. The cast is terrific, delivering performances that inspire drama, empathy and well placed humor as they portray a compelling story that draws you into their world. From the father who is trying to secure his families future, sibling rivalry run amok, a dysfunctional relationship with a stuffy but very amusing mother-in-law, and an interloping third cousin, to the infighting and politics of the house staff, the myriad of story lines keeps your interest throughout. There are so many characters that it all seems a bit much for the first few episodes. But once you get to know the characters it becomes easy and delightful to follow.
36 people found this helpful

J. SwansonReviewed in the United States on August 20, 2015
5.0 out of 5 stars
A Great Place to Visit
Verified purchase
I started hearing the raves about Downton Abbey a few years ago but didn't want to jump in to a story half told. Kept trying to catch up with the beginning of a re-run session on PBS but never got there; its availability on Prime was one of my main reasons for joining. Am almost finished with season one (although I accidently started with an episode in season four or five which confirmed my wisdom in starting at the beginning.) Even after I corrected my Prime settings it took one or two episodes to place each character in his or her place in the story. Now I am hooked.

From the perspective of this century one has to wonder at the loyalty of the staff and the entitlement of many of the "upstairs" characters. Well maybe not the latter so much; we do have lots of current examples - several of them running for President. The stories of the women are particularly compelling (and aggravating). Maggie Smith is snide and, as always, wonderful and I have to believe reincarnation may have played a role there. She is the dowager countess!

While I would have hated living there, I love visiting Downton Abbey. Don't miss it, but do start at the beginning.

DanReviewed in the United States on December 4, 2016
5.0 out of 5 stars
Downton Abbey is one of the best shows ever made
Verified purchase
Julian Fellows created a way to take you back to a period in history that most do not understand. Downton Abbey is one of the best shows ever made. The cast is perfect, the acting is marvelous and the writing and story lines are phenomenal. This time period is fascinating and watching each episode takes you back in time. As an American, I did not know how the interaction between the different classes in England worked so as a history buff I felt like I learned something as well as being very entertained. Also, I think that the shows produced in Britain are better overall than those made in the U.S. I guess That is why so many shows made in the U.S. are copied from shows in Britain.
21 people found this helpful

deej evansReviewed in the United States on January 23, 2020
4.0 out of 5 stars
Enjoyed it, but...
Verified purchase
As one who loved the Downton series and watched every episode over the 5 years, the end of the movie left me unsatisfied once again -- not wanting the story to every end! Fellows tried to include in the movie all the many stories within the series, and I think it was too much to expect from a 2-hour movie. Of course, I loved the characters that I had learned to love in the 5-year series, but the movie just wasn't that satisfying to me, and I would think that those who saw the movie without having seen the series, probably found it confusing. I think you had to know the background of these characters in order to fully appreciate the movie.
2 people found this helpful
See all reviews
Back to top
Get to Know Us
Make Money with Us
Amazon Payment Products
Let Us Help You
EnglishChoose a language for shopping. United StatesChoose a country/region for shopping.
© 1996-2022, Amazon.com, Inc. or its affiliates