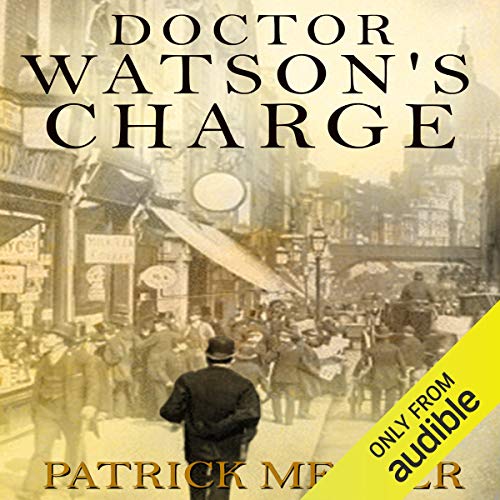 The enigmatic army officer Captain JAC Smethwick is a veteran of the The Charge of the Light Brigade. But when he visits Sherlock Holmes and Doctor Watson he has more on his mind than the conflict in the Crimea. There is a mystery surrounding the death of his former employer, Lord Cardigan. Smethwick believes that the man responsible for his death is none other than the former Prime Minister Benjamin Disraeli.

Holmes sends Watson off to Deene Park, Lord Cardigan's estate, to investigate and question the victim's widow - the colourful and flirtatious Adeline de Horsey. But Watson starts to uncover an altogether more sinister and complex conspiracy. And rather than unmask the murderer, Watson may become his next victim. The game's afoot - but who is the hunter and who will be the prey?

Patrick Mercer is author of the Doctor Watson series, as well as Men of Honour. A military historian by training, he was decorated four times as an infantry officer and then was the defence correspondent for BBC Radio 4's Today Programme.

Enjoy this audiobook free + more
Learn more about Membership
List Price: $15.16
You Save: $1.89 (12%)
By completing your purchase, you agree to Audible’s Conditions Of Use
Sold and delivered by Audible, an Amazon company
Share

Gilberto Villahermosa
4.0 out of 5 stars Well Written and Immensely Enjoyable!
Reviewed in the United States on October 25, 2017
Verified Purchase
I am a huge fan of Sherlock Holmes and Doctor Watson and found this short work true to Sir Arthur Conan Doyle's depiction of the great detective and his faithful assistant. These novels place Dr. Watson - and his own faithful assistant - at the center of attention - and deservedly so! Patrick Mercer has resurrected Holmes and Watson for the enjoyment of a reading audience - new and old - obsessed with crime and crime-solving in 19th Century England.
Read more
Helpful
Report abuse

Kim
4.0 out of 5 stars Its Finally Watson's Turn
Reviewed in the United States on February 20, 2015
Verified Purchase
Doctor Watson's Charge was well done. Holmes is more of a secondary character, the way Watson usually is, and Watson and his side kick are the main focus of the story. For the real fan there are references to other stories. It also includes historical references and background for historical fiction fans.
Read more
Helpful
Report abuse

rbcormany
5.0 out of 5 stars I got a charge out of...
Reviewed in the United States on February 9, 2014
Verified Purchase
Dr. Watson's charge is a thoroughly enjoyable addition to Mercer's new series of books about Sherlock Holmes' companion. While Holmes is a minor character in the stories, which focus on Watson, the stories are still crafted to resemble Conan Doyle's original works. I would recommend this series for any Homes' enthusiasts.
Read more
Helpful
Report abuse

enjoyment reader
4.0 out of 5 stars Enjoyable fast read
Reviewed in the United States on December 17, 2013
Verified Purchase
If you want a fast read this would be the book for you; however, if you want something with depth just bypass this one.
Read more
Helpful
Report abuse

M. Pecor
3.0 out of 5 stars Brief
Reviewed in the United States on January 23, 2014
Verified Purchase
I give it three stars because it's a short story, not a novel. Mercer has the gift, but he needs to put efforts into a full-fledged book, not a few pages here and there.
Read more
2 people found this helpful
Helpful
Report abuse

Marleitta Cooper
2.0 out of 5 stars Slow and Bumbling
Reviewed in the United States on January 23, 2014
Verified Purchase
This was my first Mercer book. Tobe honest, I am a true Sherlock(Conan Doykle) fan and found this tedious to read. Could havve been told in short story form. Story was ok, but very predictable.
Read more
One person found this helpful
Helpful
Report abuse

William Bowie
5.0 out of 5 stars Fresh
Reviewed in the United States on May 22, 2014
Verified Purchase
Unlike some pastiches this has an unobtrusive authorial voice, a competent plot and engaging characters; Holmes is not the focus, even in absentia. But that does not detract from enjoyment.
Read more
Helpful
Report abuse

A. W. Thompson
3.0 out of 5 stars This story could have been much better...but was a fun listen.
Reviewed in the United States on April 27, 2017
I listened to the audiobook version because I love the original Conan Doyle stories, and because actor Barnaby Edwards is the best reader I've found, and I'm working my way through his audiobook narrations. Mr. Edwards did not disappoint me, but this story did.

The premise about the Crimean War and the Charge of the Light Brigade was intriguing, and had great potential, especially in light of Dr. Watson's military service in so many regions where we are still fighting today.

The author seemed to have a solid bqckground in the military elements of the story, but I never felt the deep friendship and mutual respect that underlies the Holmes/Watson relationship, despite their frustrations and differences. This Holmes is entirely the supercilious aristocrat, instead of an intelligent loner with difficulty showing emotions, and Watson comes across as rather petty -- and very anachronistic in his frequent references to sexual acts. Yes, he had been a soldier, but no Victorian-era literary narrator would have addressed such salacious material so openly to a general audience, not even in the coy, stilted manner of this book. One or two indirect references would have sufficed, and maintained the illusion that this is a 19th-century story by Dr. John Watson.

Mr. Mercer could have written and meaty novel instead of a rather thin novella, if he had developed the chracters with more depth and subtlety. Simply telling the reader directly about the protagonists' sexual lives is neither as satisfying nor interesting as creating scenes and situations that let the conflicting sexual and personal tensions play out naturally, so that readers can work it out themselves. A book can drip with sexual tension and rivalry by showing that the surface behaviors displayed in the drawing room are distorted by layers of hidden emotion and suppressed conflicts. The character development was done by shortcuts, and shallowly, when it had potential for so much more. Better character development would have filled out a plot that was not quite good enough to sustain the story.

Despite the story weaknesses, reader Barnaby Edwards remained lively and believable, able to differentiate each character and add his own depth where the story lacked it.
Read more
Helpful
Report abuse
See all reviews

MissKennedy
4.0 out of 5 stars Enjoyable historical crime.
Reviewed in the United Kingdom on October 30, 2013
Verified Purchase
Enjoyable crime fiction, which is written with a fondness and knowledge of original Conan Doyle stories. Plot cleverly brings in Disraeli and the Earl of Cardigan and there is nice portrait of the Charge of the Light Brigade at the beginning of story. The author brings Dr Watson's military background to the fore - and Watson has his own sidekick in the form of the rough diamond Bowler, a former soldier. Holmes fans may find some of the language too colourful and I would have liked the villain of piece to be fleshed out more but can recommend and will take a look at other books in series.
Read more
8 people found this helpful
Report abuse

Pamela Adams
3.0 out of 5 stars Dr Watson's Bluster
Reviewed in the United Kingdom on January 16, 2014
Verified Purchase
This was another book that I have found long winded. It did not seem to keep pace with the stories of Sherlock Holmes. Would not buy any more books in this series.
Read more
Report abuse

I. Tattersall
4.0 out of 5 stars Watson goes it alone
Reviewed in the United Kingdom on December 26, 2013
Verified Purchase
Interesting take on Sherlock Holmes with Watson and his sidekick bumbling through with a certain amount of humour and impending disaster. Hope there is another one.
Read more
Report abuse

Amazon Customer
5.0 out of 5 stars Dr Watson's Charge
Reviewed in the United Kingdom on January 4, 2014
Verified Purchase
Haven't started this yet, and am really looking forward to reading it on my Kindle. Ideal book for holidays, or just to read anywhere.
Read more
Report abuse
See all reviews