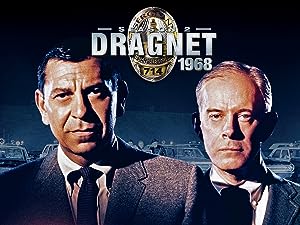 (475)
7.61968NR
This is the city -- Los Angeles. It's 1968, and Sergeant Joe Friday (Jack Webb) and Officer Bill Gannon (Harry Morgan) are hitting the streets once again in the name of law and order, to serve and protect.

KRReviewed in the United States on January 10, 2019
5.0 out of 5 stars
How many DVDs and Episodes in this Set
Verified purchase
Anyone that would like to know how many episodes are on this Season 2 Set. There are 6 DVDs with 28 original Episodes in here.
13 people found this helpful

Taheen LopezReviewed in the United States on January 14, 2014
4.0 out of 5 stars
L.A.'s Finest Investigators
Verified purchase
This is the city: Los Angeles, CA. It is 1968, and Sgt Joe Friday (Jack Webb) and Det. Bill Gannon (Harry Morgan, M*A*S*H*) are hitting the streets once again in the name of law and order, to protect and to serve, just like patrolmen Officer Pete Malloy (Martin Milner) and his faithful rookie partner Officer Jim Reed (Kent McCord) did on ADAM-12.

The community landscape is littered daily by juvenile delinquency, drug abuse, student dissidence and con-artistry but, just like that, it can all be brought to a screeching halt when gumshoes(Friday and Gannon) appear on the scene. Ladies and gentlemen, the stories you are about to see are true. Only the names have been changed to protect the innocent. This is Dragnet 1968.

Originally conceived as a radio program and then a popular 1950s television series, the DRAGNET series from 1967-70 featured the visionary cop drama of creator Jack Webb in its prime: paving the way for the hit spin-off shows ADAM-12 and EMERGENCY! along with the fact that you can see these episodes complete & uncut without all those deleted scenes you'd get when DRAGNET was shown in reruns on ME-TV, Antenna TV, TV Land, and Nickelodeon.

MikeReviewed in the United States on February 6, 2012
5.0 out of 5 stars
Just the Facts
Verified purchase
This is a nice little series.But if you like plenty of action, then this is not for you.This series shows you the more mundane side to police work.The lead characters hardly go for their guns,leave alone, use them.Harry Morgan is really funny with his banter with Jack Webb.
One scene has Harry having neck trouble and telling Jack that he has gout.Jack asks in your neck to which Harry replies,"No,in my hair.Of course in my neck".To which Jack says "I thought you could only get gout in your foot".You can get it anywhere says Harry," that's why you need me as your partner.To keep you informed"
What is good about this series is how the story keeps you watching until the end.This is down to good story-telling by Jack Webb.He was a talented man.I enjoyed all four seasons from the sixties on DVD.L.A. never looked better.
On one of the DVD's one of the extras is an episode of the series from the fifties.Being shot in black and white gave it a more grittier feel and made it look like a mini film noir.
I wish they would release complete seasons of the fifties series.
4 people found this helpful

garbabsReviewed in the United States on June 12, 2017
5.0 out of 5 stars
real tv - dragnet season 2
Verified purchase
best "REAL" show out there, forget those vampire, gory, violent shows, dragnet was based on real life stories in LA, CA in 1967-72, I grew up watching this show long with adam-12 another "real" show, based on real stuff not fake like a lot of those stupid reality shows likes the kardashians, phones to beat. I have season 1, just bought season 2 of dragnet, see it on hulu, but wanted the dvd's since Netflix took it off their catalog.
6 people found this helpful

V. WrayReviewed in the United States on October 31, 2021
5.0 out of 5 stars
Great TV Series -Frustrating Amazon Doesn’t Play to the End
Verified purchase
I love this series! That being said, please Amazon please, go fix prime video so that each episode plays ALL the way to the end showing the hand hammering the “Mark VII”. Then you know you’ve seen the entire episode. It is soooo frustrating not to get to see the end and find out what the punishment was! The 5 stars are for the Dragnet series only! If I were to rate Amazon’s playing of it it would be a totally different!

C. SmithReviewed in the United States on August 3, 2013
5.0 out of 5 stars
Good Restoration and Great Bonus Material
Verified purchase
The music and words at the intro bring back fond memories of this cops TV series - the case etc doesn't say if it has been remastered but I suspect it has seeing it is late 1960s TV series and they have done a good job and it is in colour - there are 28 episodes over 6 discs - the bonus material is the Dragnet 1966 Pilot Movie, Jack Webb: The Man Behind Badge 714, a 20 page colour commemorative booklet and a Vintage Dragnet 1969 Trailer.

The only slightly annoying thing and it is minor is that the 6 discs are contained in 3 of those slimline plastic DVD cases and hence the plastic spindle where each DVD sits inside the case is not very tall and in 2 of the cases the top discs keeps coming off the spindle. All 3 plastic slimline cases fit into an outer paper/cardboard type material jacket. I highly recommend this season of Dragnet,
5 people found this helpful

Kindle CustomerReviewed in the United States on February 20, 2016
5.0 out of 5 stars
This is better than today's crime TV
Verified purchase
This is better than today's crime TV. No bullets or explosions. It's two men using their brains to solve crimes. Also, unlike today's crime TV, it's not all murders. It's a more realistic detective show than what is on TV these days. Finally, I have my own problems and do not care for today's shows that dwell on the character's personal issues.
8 people found this helpful
See all reviews
Back to top
Get to Know Us
Make Money with Us
Amazon Payment Products
Let Us Help You
EnglishChoose a language for shopping. United StatesChoose a country/region for shopping.
© 1996-2021, Amazon.com, Inc. or its affiliates