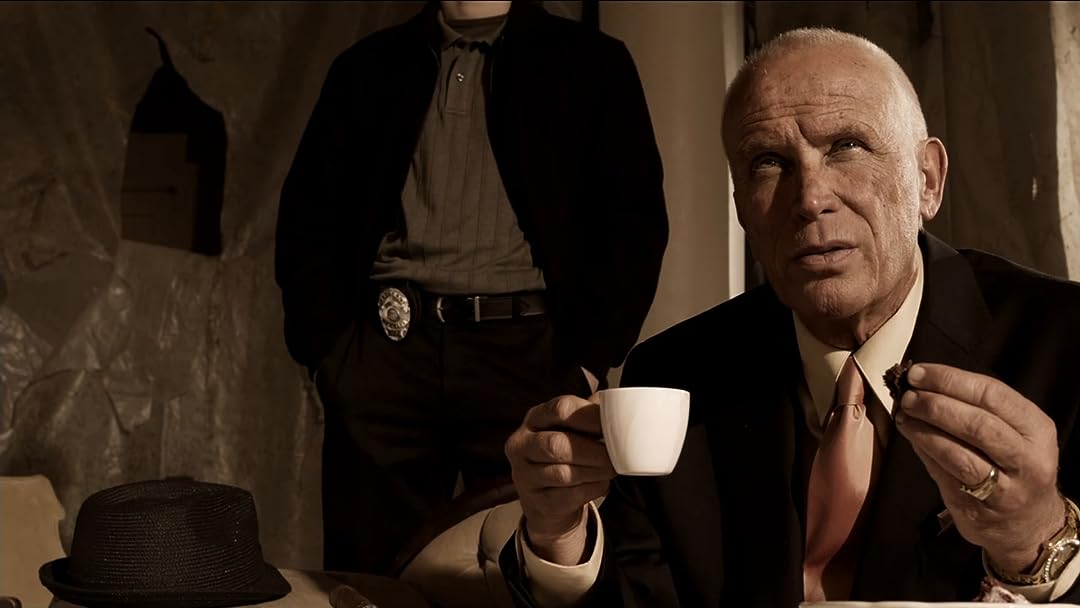 (255)
1 h 31 min2012R
In St. Jude, drug dealers and corrupt cops have destroyed an urban neighborhood. But newcomer, Hong, has the fighting skills and moral vision to save this town from itself.

Kindle CustomerReviewed in the United States on May 23, 2022
2.0 out of 5 stars
Decent enough redemption story action movie, but has blatant socio-poitical undertones.
Verified purchase
JCVD takes a fellow prison inmate under his wing, and trains him to redeem a town overrun with gang violence. JCVD's role is basically a cameo, with his appearances being limited to training montages/memories of the main character. There are some pretty good fight scenes, though you do have to suspend disbelief more than a little to accept a bunch of gangbangers with pockets full of guns going to fight the "ninja" with tools or barehanded.

Politics:
A corrupt white cop that dresses like a 1930s gangster uses and abuses minorities to sell drugs before allowing a white gang to take over the minority's territory. An Asian man defeats both minority gangs and somehow befriends and instills loyalty in a few, before defeating the white gang and the corrupt cops.

GeorgesReviewed in the United States on February 6, 2020
2.0 out of 5 stars
Van Damme's appearance only slightly better than a cameo
Verified purchase
I agree with another reviewer when I say "I wanted to like it, but it just wasn't there." I enjoyed most of the earlier Van Damme movies, but this one wasn't very enjoyable. Some scenes were so long I actually hit fast forward to get past them. But that is just one person's opinion. And however did Hong trade places with a different person and put him in a box in front of all those witnesses, when he could barely crawl away? Houdini lives? Cung Le might actually do better in a different movie. I wish him well. After all, I didn't really care for Van Damme's earlier movies either. Remember Golden Girls? Bea Arthur wanted to leave on a high note, and did. The series was still quite popular. Van Damme probably should settle down and enjoy his grand children. I wish him well also.
One person found this helpful

S. H. ShubertReviewed in the United States on April 25, 2020
2.0 out of 5 stars
Not a total snoozer...but close
Verified purchase
Convoluted, confusing, chaotic...and very slow-paced to boot. It's a shame Van Damme only had a few cameos in this picture; he almost looks like he's still got some moves but I guess his age has just caught up to him. As it is, he only makes a move ONCE in the film, then spends his other cameo appearances as a "Mister Miyagi"-type character, mentoring the Karate Kid who's going to clean up the old neighborhood. The entire movie was jumbled and hard to follow, causing me to wonder at times when this or that took place: "Wait...is this NOW? or he is remembering? Is he .... is he actually in prison NOW, or is he just remembering BEING in prison?" It's that muddled. The fight sequences are simply not good enough to give this film any kind of positive review. I actually fell asleep numerous times during the movie - including some of the fight scenes. And the ending was just... you're left with one of those "I just wasted an hour and a half for THAT?" I wouldn't say "Avoid this one at all costs..." but there are definitely far better movies out there that you could spend your time on. This one was "meh" at it's very best.

Joshua BurketReviewed in the United States on June 23, 2022
2.0 out of 5 stars
Couldn't watch the whole thing in one sitting
Verified purchase
I clicked on it because of Van Damme being on the cover. There are a lot of former MMA fighters in it. Van Damme's time in the movie was almost as if they wanted him to be part of the cast so bad but couldn't afford him for a full movie.
Fight scenes were engaging but there was WAY too much slow motion. I couldn't watch the entire movie in one sitting. In fact, I skipped ahead a few times because the scenes with just dialog were incredibly boring.

Kenneth HarriganReviewed in the United States on August 29, 2014
4.0 out of 5 stars
It's Better than you think
Verified purchase
Bias Alert!!! I greatly appreciate action films and my secondary bias is I have over 300 martial arts movies. So I might be rating this movie a little high unless you love action films also. I am not a fan of Jean-Claude Van Damme and I don't know where this guy Cung Le came from so I have no love for the stars of this film. By now everyone should know that you do not see Van Damme films for the acting and rarely for the storyline. So now that I have given you all the negatives, let me tell you why I gave this 4 stars. First, this is the exception to the no storyline rule. This is a film about redemption and making amends for past mistakes. Second, the fight scenes are very well done, especially if you appreciate hand to hand combat. There are no magic film fights here and no flying on strings. Add to that decent acting and you can enjoy some hard hitting action.
3 people found this helpful

phaidout66Reviewed in the United States on April 14, 2014
3.0 out of 5 stars
Not bad but not great.
Verified purchase
I can honestly say that when these legendary martial arts actors such as Van Damme and Seagal have to start using stunt doubles more and introduce another martial artists who are younger, then its time to try another role. Now that being said. Van Damme did okay with being a mentor and teacher to Cung Le and made for a better story since he was not the lead actor in this one. Cung Le is a good martial artist but not as a fast as Jet Li or Donnie Yen. Those guys kick ass fast. But this movie also has other supporting actors to keep the story at least on an even level to maintain my interest. Its a good "B" type action movie for the night when all the other excellent choices were taken.
2 people found this helpful

S. StutzmanReviewed in the United States on April 28, 2018
3.0 out of 5 stars
Wanted to like it but couldn't
Verified purchase
I have mixed feelings about this movie.

Good acting as far as I was concerned, decent story, and good action scenes. Script was hard to follow though. With less-than-obvious flashbacks, and starting the film towards the end of the film and then trying to explain how the main character got there, just left a lot of confusing moments. Even by the ending, I'm not sure I totally understood what was going on. Then the ending was meh. I expect more than this in a movie.

MantisReviewed in the United States on March 15, 2013
3.0 out of 5 stars
"Do you know what Sluder's syndrome is?"
Verified purchase
Director John Hyams has raised the bar when it comes to low-budget, direct-to-video movies. His two recent sequels to the seemingly dead "Universal Soldier" franchise were astoninshingly enjoyable and refreshing, and in my opinion, both were better than the original. When I read that he'd be giving MMA champion Cung Le ("True Legend") his first starring role I was pretty excited. I'd read a lot of mixed reviews about this film before I finally purchased it. Reviews that mostly griped about the plot and its confusing presentation. I would agree that some complaints in that department are not without validity but that's hardly what makes or breaks an action film for me. I look for the action itself, which has been given both praise and criticism by other reviewers. More on that in paragraph 3.

Cung Le plays the silent Hong, a former convict who moves into the gang-infested neighborhood of St. Jude (a New Orleans borough, according to the DVD box) with intentions of cleaning up the streets. St. Jude is ran by two gangs: the hispanic 6th Street Kings and the all-black Eastsiders. Both gangs and the police are run by Mr. V (Peter Weller, "Naked Lunch"). After kicking the crap out of a couple of thugs, Kong slowly earns the respect of the gangs and Mr. V, who eventually hires him to oversee both factions. Kong allows the gangs to continue operating, albeit with some restrictions on how they treat the locals and who they sell their drugs to. Life becomes good for both the citizens and the gangsters until Mr. V's large stash of cash comes up missing. V then hires the Devil Dogs, a group of brutal Russians, whose prior agreement with V was the only thing previously keeping them from taking over St. Jude.

Those reviewers critical of the action have made minor mention of the overuse of slow motion and, perhaps, for many of them, it wasn't that big of a deal. To me, it completely sinks the film. I don't recall one fight that wasn't completely saturated with it. Why does this keep happening with filmmakers who ought to know better? Please stop it! Stop and think about all the great martial arts scenes on film that have ever excited you and I'll bet that if any of them involved slow motion at all, it was used sparingly. Unless your favorite fights involved the '90s output of Don "The Dragon" Wilson. I'll even give American examples of good ones: "Undisputed 2 & 3", "The Girl From The Naked Eye", "Never Back Down 2", "Blood & Bone". Those are movies with great fight scenes! All since 2006. I'll admit that it's convenient to see a kick coming, knowing that I have time to get up, refill a beverage and come back before it's completed, but, ya know what? I have a pause button on my DVD remote for just such an occasion.

Along with Hyams' most recent film, "Universal Soldier: Day of Reckoning" (also with WAY too much slow motion, thought it works a little better), Jean Claude Van Damme's name is listed at the top of the DVD, clearly indicating a starring role, despite maybe 10 minutes of actual screen time. Now for me that's not much of a deterrent as I'm not a particular fan of Van Damme. Oh, there's a handful of his flicks that I enjoy, but deliberate deceipt concerning his involvement is still a risky move considering how many fans the Muscles from Brussels has out there.

The DVD from Warner Bros has good picture quality with English as the only spoken language and subtitles available in English, French and Spanish. This DVD has NO special features, either. Again, the slow motion may not bother others nearly as much as it bothered me but I cannot recommend it primarily for that reason. Otherwise the acting's decent and there are quite a few unique touches for a low-budget kick-flick. Cung Le does a good job and I look forward to seeing him in more flicks. The leader of the Devil Dogs is played by MMA fighter Trevor Prangley and his film presence needs to be taken advantage of ASAP. Hyams is still in my cool book but he's on probabtion. 2.5/5

2012
4 people found this helpful
See all reviews
Back to top
Get to Know Us
Make Money with Us
Amazon Payment Products
Let Us Help You
EnglishChoose a language for shopping. United StatesChoose a country/region for shopping.
© 1996-2022, Amazon.com, Inc. or its affiliates