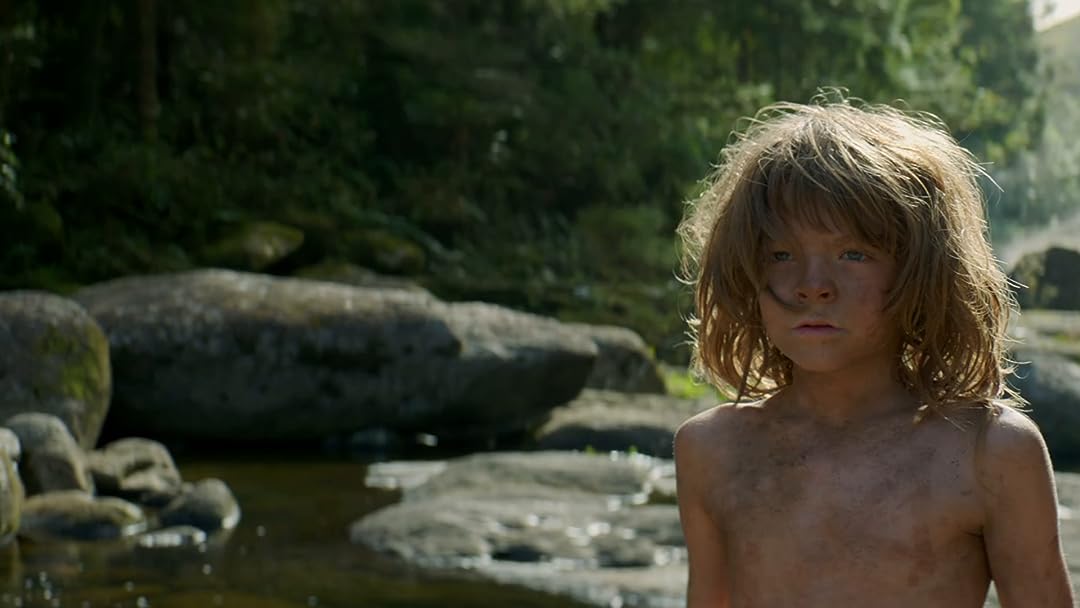 jonathanReviewed in the United States on April 20, 2017
5.0 out of 5 stars
"Oh Petey" Changed story but Classic Disney.
Verified purchase
Disney provides a new take on an old Classic. My children absolutely love this movie. The intro is a bit sad, and did require a bit of explanation to my children. If you have watched Lion King, you will have had to explain a very similar situation. The graphics of the movie are very appealing. The story has some of the basic similarities, but is definitely upgraded. There are a few scary points in the movie. My 5 year old watched it and did very well, without nightmares.

The classic Pete's Dragon cannot be topped/replaced. I have added this to my Disney Collection alongside the original. There is just something about the older style movie that evokes a feeling of Nostalgia. My children may have that same feeling when they are older about this version of Petes Dragon.

Definitely pick up a copy of this movie, you will not be disappointed.

JoeomarReviewed in the United States on February 6, 2017
4.0 out of 5 stars
Great little movie
Verified purchase
This very nice little movie slipped in and out of the theaters without much notice. It is generally assumed to be a remake of the 1977 film by the same title, but the plot is so completely different they really should be considered two different movies. Even the locations are different, the first movie taking place on the seacoast (think "Maine") while this one takes place in the mountains (Colorado perhaps). Although the plot of this movie is not particularly original (it is patterned after "E.T."), it is really a much better film than the first one, quite entertaining and occasionally surprisingly moving. The first movie was a mix of live-action with animation for the dragon; this one takes advantage of current technology to create a CGI dragon which of course looks far more like an actual creature. My only complaint about the dragon is he has fur(!) instead of scales; the cynic in me wonders if this was to support a line of furry "Elliott" stuffed toys. Scaly toys aren't real common. Anyway, the acting is fine, with Robert Redford playing a significant role. And one big plus is a really great soundtrack featuring folk and bluegrass music, including songs by The Lumineers and Leonard Cohen among others. I admit this movie surprised me with how good it turned out to be, and it's really a shame it didn't get more attention when it was released.
31 people found this helpful

Inquiring MindsReviewed in the United States on July 15, 2018
5.0 out of 5 stars
Get this one before they run out - you'll be sorry if you miss out...Superb movie - highly enjoyable...
Verified purchase
Finally a decent movie with some redeeming qualities. Well executed with enjoyable special effects - the dragon is the Star you might say. This proves there is still hope for Writers/directors/actors to pool their talents to come up with a story (fanciful as it may be) which still brings out the ultimate best in man. A lot of effort went into scripting the dialog to make the movie come together as a cohesive whole. Highly recommend this one - even adults (with little children in the audience) will have a bonding experience for an hour and a half. Highly recommend you give this one a try - especially in Blue-Ray. Even R.R. had a good part to play in bringing the story to level where smaller children could easily relate. I would give it a 6*** if possible. One you'll want to watch again when you get fed up with the mainstream junk with nothing even close to what is presented here. Job well done.
5 people found this helpful

JoniReviewed in the United States on April 19, 2017
5.0 out of 5 stars
beautiful movie.
Verified purchase
Let me just start by saying, that this movie was more than I expected it to be. This is a movie that was so in touch with it's plot of the story. They did such a great job with this movie, I'm happy that I finally had the chance to watch it as I was unable to make it to the theater to view it, but viewing this at home was perfect . The dragon looks so real in this movie I was impressed and I even cried at the end. this is really such a beautiful story about a boy and his dragon. There are some sad parts but the ending did not disappoint one bit. Also , this is a great family movie kids friendly and all which is nice too because I watched this with my niece and my grandmother we all had tears in our eyes at the end because it's such a nice movie definitely hits the emotions specially when pete and the dragon get separated for a short time during the movie. This definitely put me back in touch with my child hood omg, did it ever . awesome movie to watch with my family.
9 people found this helpful

Amazon CustomerReviewed in the United States on July 7, 2021
5.0 out of 5 stars
Excellent family adventure movie on Blu-ray quality.
Verified purchase
Many have seen this excellent remake that is much better quality than the original, so I won't bother with much detail of the plot. This has great computer generated scenes of the dragon, not the partly clownish animated one in the original. The blu-ray quality of picture and sound is excellent. It comes with a dvd of the movie too which is nice to have, but probably won't be watched when you have the higher quality blu-ray movie. For region, this is viewable on American blu-ray/dvd players.

The "dragon" isn't of course the traditional fierce fire breathing reptilian creature that is like a plague on mankind by swooping down and setting fire to villages in medieval times. Instead it resembles the kind hearted dog like "Luck Dragon" in the NeverEnding Story movie, but forested green colored for better camouflage, intelligent, and very protective and loving towards the little boy.

The blu-ray disc has closed captioning in English which is fun to have on, even if you're not hard of hearing. Sometimes in movies it catches a subtle soft spoken word in the background or something that you may not have noticed with the CC turned off. The blu-ray disc comes with added feature videos, such as some behind the scenes filming and some bloopers. Like the epic Lord Of The Rings trilogy, it was filmed in the beautiful forested part of New Zealand.

In summary I'm very pleased with the excellent quality of this blu-ray movie, and the movie itself is very enjoyable to watch again from time to time. It's a wholesome family oriented movie with no offensive low life F-bombs or other such things to wreck the movie. I hope people find this review helpful.

ZamaReviewed in the United States on November 4, 2020
3.0 out of 5 stars
Who is the audience for this ?
Verified purchase
I can tell this is a good solid film, good acting etc. I just did not get swept up in it that much. It sortof tells the same joke over and over, and also, does the exact same roller coaster loop 4 or 5 times at the end. One emotional crescendo is enough. Its like they made a few different endings for the screen tests and then decided to just use them all. I would not want to rewatch this movie, in an era of watching movies 100 times at least. This is probably a 5 star film that just got clobbered in the editing room and too much audience testing and committee decisions.
One person found this helpful

Mimi MatyikoReviewed in the United States on January 4, 2017
5.0 out of 5 stars
Elliott the Dragon is a cutie
Verified purchase
Saw this at the 4D, RPX, DX, IMax..multiplex..you get the point, and the graphics are awesome. The dragon is so lifelike..the personality of this sometimes invisible dragon is just too cute! The whole family loved this remake of Pete's Dragon. It was a similar story to the original but a more believable story line. We went three times to the theater to watch. One person I recommended the TV version to watch told me they didn't see all the hype. Sadly, when I watched it on the TV it had lost some of it's magic from the big screen. The movie is still very well done and the cast is awesome. Hope you enjoy this Disney remake of Pete's Dragon..we sure did!
6 people found this helpful

Russell SReviewed in the United States on January 2, 2017
5.0 out of 5 stars
So much talent and this live action is wonderful.
Verified purchase
So we have Pete who is 5 years old and he is travelling in the Pacific Northwest with his Mom and Dad and they have an accident and the parents....don't make it. The boy wanders into the forest and gets into trouble, only to have his new best friend save him....Elliot the Dragon. I loved this movie, I loved the performances and I loved Pete and Elliot! This movie boasts quite a cast and among them, Karl Urban, Wes Bentley, Robert Redford and they and the rest of the cast are superb. I don't want to say too much but if you know Disney, you know where this will go. I want to say that it isn't sad or depressing as most Disney movies can be but it does have its moments when you want to shed a tear or two. L e say that you and the family will smile and enjoy.
8 people found this helpful
See all reviews
Back to top
Get to Know Us
Make Money with Us
Amazon Payment Products
Let Us Help You
EnglishChoose a language for shopping. United StatesChoose a country/region for shopping.
© 1996-2022, Amazon.com, Inc. or its affiliates