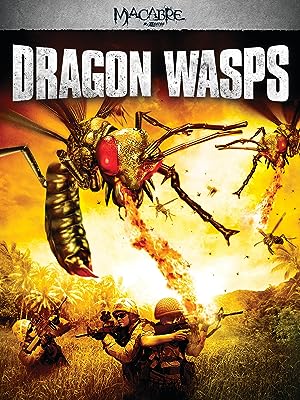 (72)
3.01 h 24 min2012PG
Entomologist Gina Humphries goes searching for his lost father in the jungles of Belize,escorted by soldiers. They get kidnapped by guerillas and attacked by a horde of dragon wasps. Survival depends on soldiers and guerillas banding together against the insatiable insects

EinsatzReviewed in the United States on July 20, 2014
3.0 out of 5 stars
"At least if we die we die happy."
Verified purchase
Of course there's a hidden lab deep in a jungle, where else would you put one if you were planning to create some HUGE killer wasps. Naturally, some old dude just had to go poking around in this lab; he soon goes missing requiring his dutiful daughter to search for him. Enter Corin Nemec as a reluctant tour guide/body guard/bug killer. He's a soldier with a very small platoon (small body count). And as if the killer wasps weren't trouble enough, there's also a local guerilla guy with a fondness for stretching out words with ssssssssss in them. Unfortunately, they let him talk way too much. He's about as menacing as Elmer Fudd.
The quotient of bug action to human action was way off. In a sci-fi flick titled Dragon Wasps, you would expect more wasps, less people. Sadly, this is not the case. The angry insects are used sparingly and repetitively. The acting is uniformly subpar, the dialog is yappy and inconsequential, the plot is pretty basic. There are absolutely no surprises. Nothing unique is offered but for the title and the promise of some interesting monsters that never really materialize quite in the way they should have. A bit of a disappointment, it was just barely okay.
One person found this helpful

SaintPendulousReviewed in the United States on October 28, 2014
4.0 out of 5 stars
Definitely worth it for your B-Monster movie collection
Verified purchase
Classic B Monster movie! it has Corin Nemec in it who also was in Sand Sharks, Robo Croc, Dracano, as well as Mansquito! This guy is quickly climbing my list of favorite actors for his work in these movies

Dragon Wasps is about what most kinds of these movies are about...and to be honest its two words I look for in the description of these movies. "Genetic Experiment" typically automatically puts the movie in my cart and this one seriously didn't disappoint. Nobody really of much fame is in this but some might recognize the bad guy from "Poseidon Rex" (another most have in my opinion for your crappy monster movie collections.)

Its got a pretty good pace and the animation is actually pretty great as far as these movies go. Its got enough humor to keep it light but not over the top and even mentions "Sand Sharks". Its definitely not an academy award winner but its fun and worth the watch

westiclesReviewed in the United States on March 13, 2016
4.0 out of 5 stars
Fun movie
Verified purchase
Not too bad for an animal hybrid movie. I thought the effects were a little better than most of these types of films. The acting was hit or miss. I didn't feel cheated out of the hour and a half I spent watching it and would probably watch it again.

PR GUYReviewed in the United States on March 2, 2014
1.0 out of 5 stars
I am ashamed that I bought this...
Verified purchase
What a total rip-off of a so-called sci-fi film. Horrible special effects...even more horrifying actine...and a plot that reminds me of a 1940s Tarzan film. Avoid. Don't even rent. Spend those extra 90 minutes watching three old episodes of The Twilight Zone.
One person found this helpful

Paul HReviewed in the United States on February 23, 2014
4.0 out of 5 stars
Hilarity Ensues!
Verified purchase
I can't help but wonder what all the people who claim to LOVE B-rated movies expect from such movies. Maybe if you're some sort of B movie critic then this might not be for you. But for anybody who knows how to pop one in and enjoy it? This is gold. A few quality one liners for sure and plenty of ridiculousness make this a film worth your time!
One person found this helpful

Kathie P.Reviewed in the United States on June 23, 2019
3.0 out of 5 stars
Big wasps
Verified purchase
Your average big monster movie. Worth watching once.

Amazon CustomerReviewed in the United States on September 19, 2015
2.0 out of 5 stars
Bad CGI
Verified purchase
Poor effects. Since it is an effects driven movie I gave up after about 10 minutes of viewing time.
See all reviews
Back to top
Get to Know Us
Make Money with Us
Amazon Payment Products
Let Us Help You
EnglishChoose a language for shopping. United StatesChoose a country/region for shopping.
© 1996-2022, Amazon.com, Inc. or its affiliates